October 28 2015
8
Last Thursday, in a speech at the final meeting of the international Valdai Discussion Club in Sochi, the speaker of the Iranian Majlis (Parliament), Ali Larijani, cited data from his country's special services on the financial possibilities of the Islamic State terrorist group. Its savings Iranians estimate in 30 billion US dollars. Larijani’s information once again confirmed the assumptions that flashed in the Russian and foreign press that the IG group was the first stories billionaire terrorist organization. 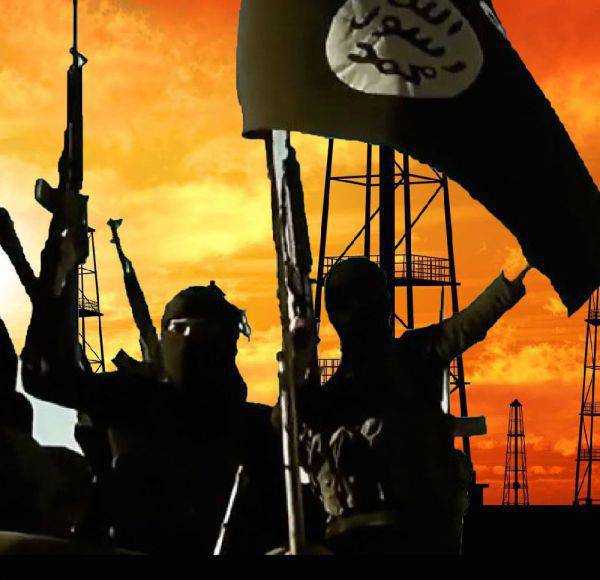 However, interest in financing Islamic militants has fueled the American authorities. Exactly one day before the start of operations in Syria, the Russian Aerospace Force, 29 September, the US State Department announced a reward of $ 5 million for information that would eliminate the financial schemes of the Islamic State terrorist group.

Difficult to understand, this is the real purpose of the United States or their propaganda trick. There have already been cases in history when such promises of the State Department did not lead to any real results. It happened in 2011 year. Then, the UN Security Council Committee on Al-Qaida and Related Persons Sanctions included Emarat Kavkaz (“Caucasus Emirate”) as a terrorist organization in the consolidated list. The Americans also showed activity and announced a reward of five million dollars for information about the whereabouts of Chechen militants leader Doku Umarov.

That made them right hand. And the left one was supported by the propaganda news agency Kavkaz-Center. It was published by entrepreneur and political activist Mikael Storsjo, treasurer of the Finnish human rights organization Electronic Frontier Finland. In the press flashed messages that this NGO is largely funded from overseas. There is also evidence that the Kavkaz Center sponsor is the American Committee for Peace in the Caucasus. It is founded by the neo-conservative organization Freedom House, which directly cooperates with the US government. So the tribune for the speeches and statements of Chechen militants was provided by the same sources that announced the award for Umarov.

The leader of the Chechen terrorists will be killed, two years later, without the participation of the Americans. They will keep their money in the State Department's account unclaimed. How will this time? Will the activity of the US State Department turn out to be an imitation of the action again or will the financial schemes of the terrorists really be destroyed? There are doubts. Moreover, there are hints of communication between the IG and the CIA in the press, and the Coptic Patriarch Tavadros II explicitly stated in an interview with the television company MEMRI-TV that Islamic terrorists in the Middle East nurtured the West, and its interest in the activities of such groups remains.

Recently, the terrorist group "Islamic State" began to be presented as a self-sufficient, self-financing structure. Draw the following picture: IG captured the Iraqi and Syrian oil fields, pumps oil, sells it cheaply and pours millions of dollars. For example, the American agency Associated Press, citing sources in Iraqi intelligence reports that the IG on oil operations receives a month up to 50 million US dollars.

The figure is serious. However, if it is multiplied by 12 months and for the duration of the illegal exploitation of oil fields by terrorists (three, maximum, four years), you get about 2,5 billion dollars - twelve times less than what the Iranian parliament called on Valdai.

The data of the American Agency are confirmed by special sources. So, according to information that researchers of the American analytical center Middle East Forum put in open access, 253 oil wells are under IG control in Syria, of which more than 160 are in working condition. As a result, oil production is up to 30 thousand barrels per day only in Syria and from 10 to 20 thousand barrels per day in Iraq.

Further calculations more difficult. According to the Iranian agency Tasnim, IG sells oil to smugglers at prices ranging from 10 to 35 dollars per barrel, with an average global price of $ 50. How much and at what price sold - go figure it out.


In the shadow of the flow of petrodollars


In any case, the sweet tale of the Western media about the fact that the economy of a terrorist group rests on the oil trade does not hold water. This is confirmed by the testimony of the researcher of the same Middle East Forum center Aymen Jawad al-Tamimi, who is, as he writes, "somewhere on the Syrian border." According to al-Tamimi (and he keeps track of how the budget of terrorists is formed in the Syrian province of Deir-ez-Zor) here the IS income for the month is about 8 million US dollars, and only 28% of the total funds received come from oil trading. The main share of terrorist income in the province (more than 45%) is property confiscated from residents.

The same picture and the whole grouping of the IG. She became rich in plunder, robbery, extortion, ransom for hostages, human trafficking (sexual and labor slavery) and human organs, sale of captured archaeological sites of Iraqi and Syrian culture (they are sold through intermediaries at underground auctions in Western countries), drug trafficking and sponsorship support, mainly from the Gulf monarchies. Among other things, the terrorists collect "Islamic tax" (tax for refusing to accept Sunni Islam).

Now everything is in order. The first serious money the terrorists of the current IG received after the capture of several cities in Iraq, especially Mosul. The Islamists looted all the banks. From this operation alone, the grouping budget was replenished with 400 million US dollars. Then the banal racket flourished. He gives a month to eight million dollars. According to eyewitnesses, “if you missed three prayers in a row, the store is taken from you. If you transport prohibited goods like cigarettes, they take away all the money that is with them. ” Plus familiar levies from local business.

What income does the IG group have from the ransoms received for the hostages? Here the data is different. Some sources indicate that these funds reach 100 million dollars per year. TASS cites, as a reliable figure, the earnings on ransoms for hostages in 2013. Then it was $ 63 million.

The accounting department of the IG drug trade is publicly reflected a little. But RIA "News»Quoted recently the head of the Federal Drug Control Service of Russia, Viktor Ivanov. He believes that the Islamic State terrorist group gained momentum from profits from the sale of Afghan heroin. "In this sense, ISIS is just a cast of these drug-transit criminal gangs, which have gained momentum uncontrolled." And opium production in Afghanistan continues to increase and this year it will grow to 8 million tons.

Experts say that in the territories controlled by the IG grouping, there are several drug trafficking. One is Afghan heroin, supplied by Islamist-controlled terrorists from Afghanistan. The other is synthetic drugs walking the Turkish route.

This was indirectly confirmed on Monday, when Lebanese security forces detained Saudi Prince Abdel Mohsen Bin Walid bin Abdul Aziz at an international airport in Beirut on suspicion of drug trafficking. According to the Lebanese National News Agency (NNA), 40 bags of amphetamine weighing about two tons were found in the Prince’s private jet. By the way, Beirut airport is the nearest international port to the territory controlled by IG. Bort Abdel Aziz headed to the capital of the Kingdom of Saudi Arabia - Riyadh.

Whether the security forces of Lebanon will open the link of the Lebanese prince with drug dealers from the IG, it remains only to guess. But the fact that contacts exist between the Islamic State group and Saudi Arabia is a very reliable fact. Recently, a deputy of the Iranian Medlis, Mohammad Saleh Jokar, said that he has information about receiving IG assistance from Saudi Arabia in the amount of 4 billion dollars.

Meanwhile, the former head of the special Senate Committee on Intelligence of the US Congress, Bob Graham, named the key figures who are in contact with the IG. It is close to the royal house of Saudi Arabia, Sheikh Abdullah al-Muhaisani. It was he who once initiated a campaign of donations in favor of Islamic extremists. In the financing of the IG group, the Syrian Sheikh Adnan al-Aarur and the Sami al-Aridi, the Jordanian, appeared in the light of the Saudi intelligence.

Through this company, money goes different, including from the KSA military budget. It significantly exceeds the needs of the kingdom (it spends 18,7 billion dollars per year on military needs - more than China). According to the intelligence services of the United States, Israel and Russia, it was from the military budget of Saudi Arabia that the money went to finance the Pakistani nuclear missile program, the creation and development of the Taliban. Now it is the turn of the Islamic State grouping.

Among its sponsors, experts also name Qatar and certain circles of Jordan. In these, as in other Gulf countries, there is a compulsory tax on the development of Islam (Zakat) and the collection of money for charity. Who today promotes Islam in the Middle East, I think, is clear without explanation. Therefore, the collected funds often migrate to the treasury of a terrorist group.

All of these countries - allies of the US coalition against the IG. It is not by chance that the president of the Institute of Religion and Politics, Alexander Ignatenko, calls the main problem of resolving the Syrian crisis that “the states that entered this coalition (with the United States) either took an active part in the creation of the“ Islamic state ”or were interested in its existence ".

Hence the pedaling of the oil trade, as the main financial source of the IG. The whole gangster trade of terrorists and their support by states that, at the expense of this group, are striving to strengthen their position in the region, remain in the shadows.

... As for the initiative of the US State Department on remuneration for information about the financial schemes of terrorists, it is most likely doomed to failure. Even from a simple review can be seen: these schemes are larger than the limbs of the centipede. And most importantly, peace in the Middle East will come only through the destruction of the IG group itself, and not its criminal billions.

Ctrl Enter
Noticed oshЫbku Highlight text and press. Ctrl + Enter
We are
Results of the week. “There were good people ... Warmed up, robbed. That is, picked up, warmed ... "Results of the week. “Russians, surrender, we are a horde!” - “And us - army!”
Military Reviewin Yandex News
Military Reviewin Google News
8 comments
Information
Dear reader, to leave comments on the publication, you must sign in.