Once again to the question of the reconstruction of the armor of the era of the Trojan War. Warriors with Shields (part 11)

November 3 2015
49
So, the theme of the Trojan War and used in it weapons and the armor is coming to an end. Actually, it was considered almost everything that is possible, attracted significant iconographic material. As already noted, a significant amount of works of English-speaking historians were used, including those involved in the reconstruction of ancient artifacts. However, we have not touched the most important thing - the reconstruction of the armor of the era of the Trojan War as a whole, so to speak - full-scale reproductions of its military equipment "from head to toe." Someone makes swords and daggers, but what about the armor? So far in the previous article, we met with the work of only one person - the Greek reenactor Katsikis Dimitrios. But surely there are other and even whole societies?


Here, however, one should distract from the personalities and see what kind of thing this is - “historical reconstruction ”and what purposes does it serve? To begin with, the drawings by Giuseppe Raw are also a reconstruction. But this type of reconstruction is the simplest. The reconstruction in which the author reproduces the material and its processing technology is more complicated. That is, the fabric for the shirt is made from flax, which is spun and bleached, then there comes the turn of the loom, and so on and so forth. Here, it turns out that even a bronze sword is easier to copy: it got the metal of the required composition, cast in a modern crucible (although you can do it the old way!), Processed it with modern tools and okay! Although it’s possible it’s the same as pants, and a shirt can be made using “that technology”. And, therefore, the first type of reconstruction is a 100% complete immersion in antiquity. In fact, this is an extremely expensive experiment, reminiscent of immersion in the past. There’s a wedge everywhere! It’s not tricky to fake a blade, but you need an anvil and a hammer of that time. And what to polish? Sand? How to drill holes? How to drill? What clothes and, sorry, underwear? A lot of questions and all of them affect the purity of the experiment. That is why such experiments, due to their complexity and high cost, are extremely rare. 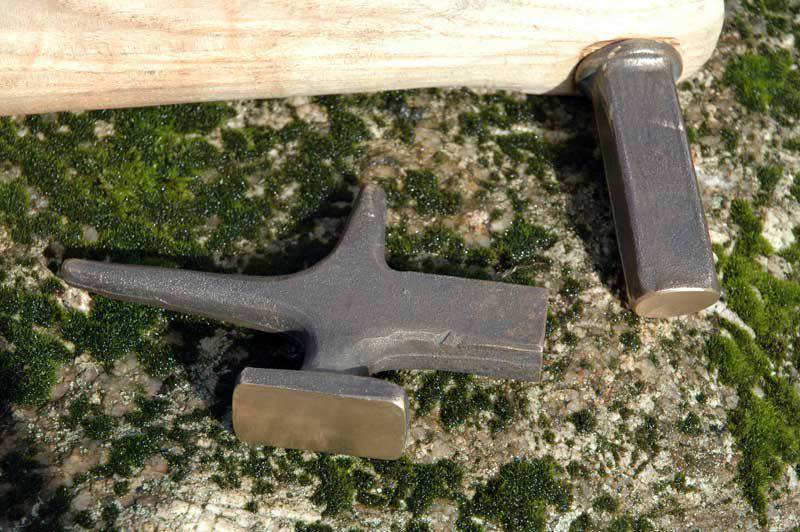 Ancient tools can also be obtained from Neil Barridge! A copy of those who worked the ancient masters!

The second option is simpler, this is when the goal is important, and not the means to achieve it. That is, we pour it into a chill mold, drill it on a machine tool, buy thread in a store, fabric too, dye it with aniline dye, and use “leatherette” instead of leather. There is also a benefit from such reconstruction, because as a result we see a “living image” of a person of that time. Can we experiment with whether it was convenient for him? Could he do this or that, besides such reconstructions are often made in films. Finally, the third view is reconstruction for ... children! The most, in my opinion, are “not historical,” and ... the most “grateful,” because they well awaken the children's love of history. A number of schools deal with them, even if their number is small. Several years ago, in the Levsha magazine (appendix to the Young Technician magazine) I published a series of articles on how to make the most “cheap and cheerful” (that is, reliably) armor and weapons of different peoples of the past, starting from Egyptian warriors and ending with the knights of the Middle Ages. It is clear that armor and weapons made according to this principle are nothing more than toys, but they are interesting and useful to children - it has been tested in practice.

Well, adult uncles play seriously and buy themselves armor and weapons worth several thousand dollars!
For example, in England there is an organization called Ermine Street Guard. They reconstruct the weapons of the warriors of Rome, are shot at the movies, they have their own fortress, where they serve and "click" with tourists. The price of one set of armor (not a centurion!) - 3000 pounds! 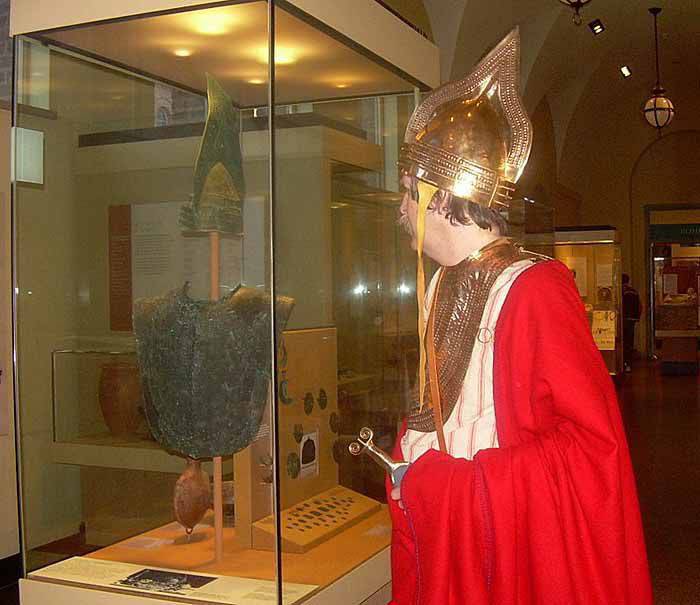 Many professionals that collaborate with museums. For example, Mike Simkins, who makes copies of Roman weapons using museum samples, and museums spread them next to the “antiques” for comparison. But Neil Barridge (about him here was told when it came to swords and other ancient "iron") decided to reconstruct the ancient shield of the Bronze Age! 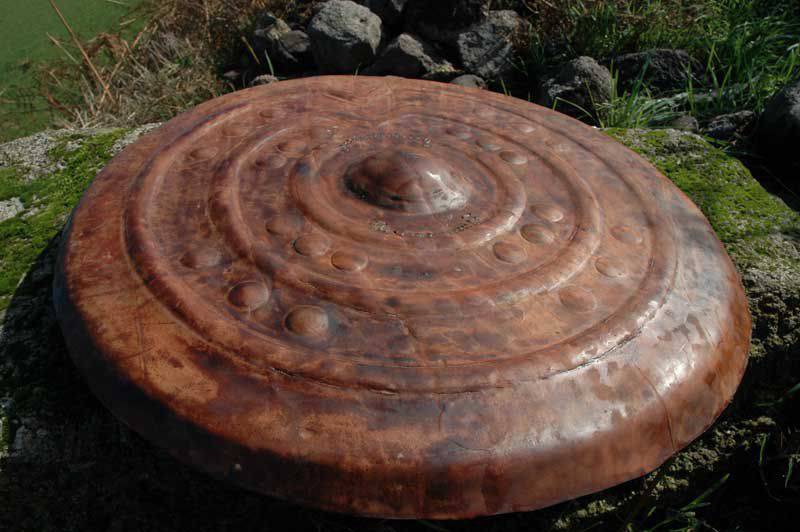 He himself writes about it this way: “The Clonbring Shield” (from Clonbrin) is the only surviving leather shield of the Bronze Age, and it is quite possible that it was made in the 13th century BC. It was found in 1908 during peat cutting near Clonbrin in Longford and is now on display at the National Museum of Dublin. Due to the fact that he was in peat bog, his safety was almost perfect, which allowed him to study well. 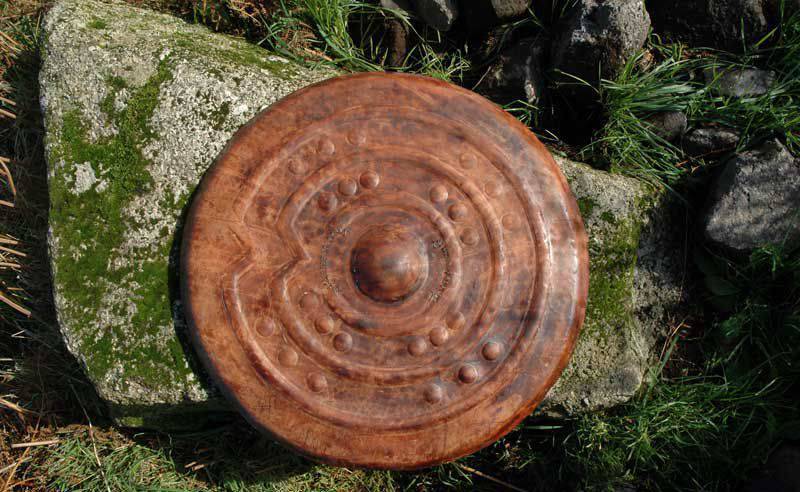 This photo clearly shows the pattern of the shield, and even those places where it was sewn with threads.

It turned out that the shield was made from a single piece of very thick natural leather, probably from the skin of an ox, and has some traces of combat damage on it. For additional protection, his hands were made of an umbron, and also made of leather. Although there is no other such thing, there are surviving bronze shields with a similar pattern from the Bronze Age, and they were found in places far from England, such as Spain and Southern Scandinavia. 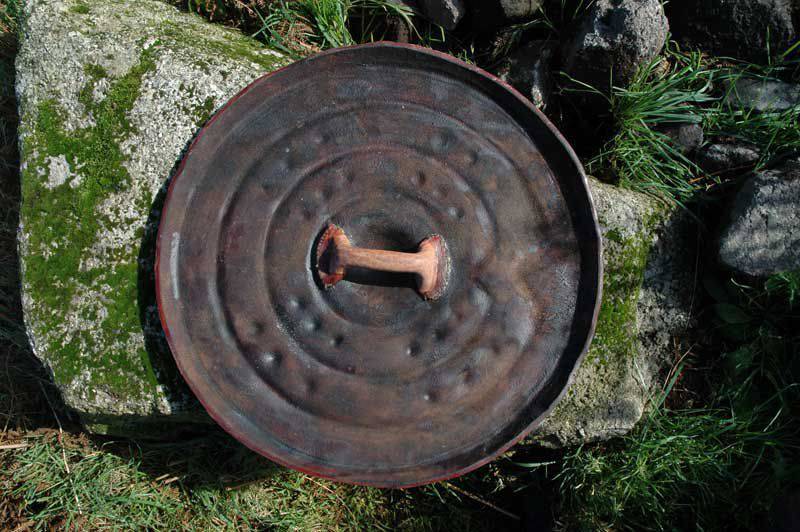 The comparative simplicity of making leather shields compared to bronze shields confirms the theory that leather shields were probably the most popular means of protection in the bronze age, and this was a good defense. The replica of the shield was made in the technology of the time with the use of a wooden stamp and hot water. The entire shield after molding was covered with beeswax. In 2009, he was tested for durability with a bronze sword and showed himself much better than expected, even when he was attacked with a spear. The shield was damaged, but after that it was immersed in the lake for the night and when the next morning it was taken out of the water, there were practically no signs of damage on it. The cost of a replica of such a shield is £ 350. ”

The works of most reenactors are performed exceptionally accurately, and this is understandable: nobody needs a bad product! Well, the sources are again archaeological finds. 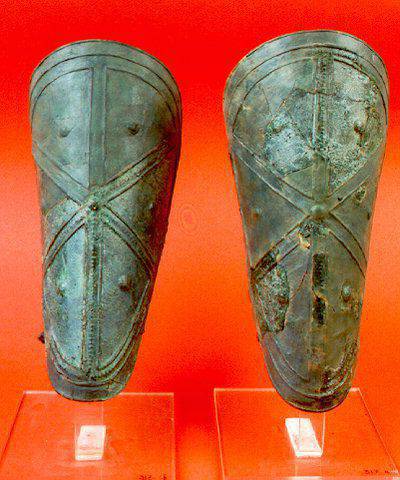 Here, for example, Mycenaean bronze greaves from the burial in Kallithea, the Archaeological Museum of Patras (XII century BC). 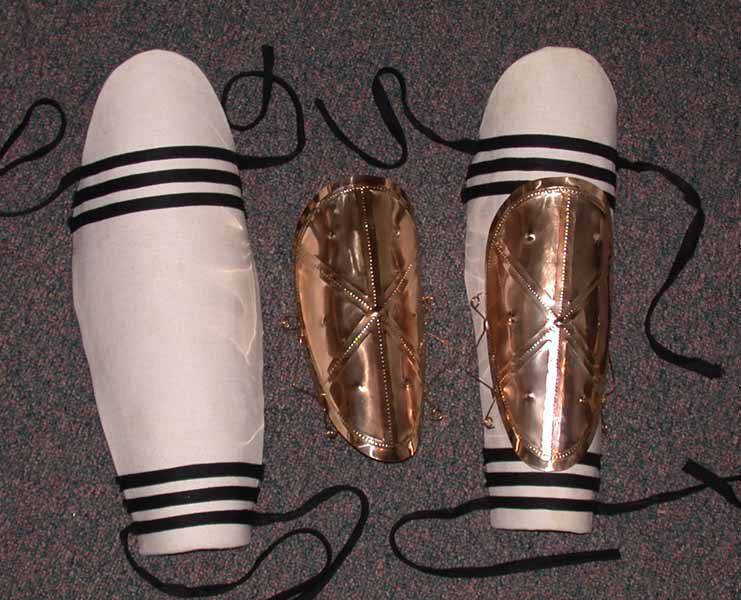 And this is their reconstruction! 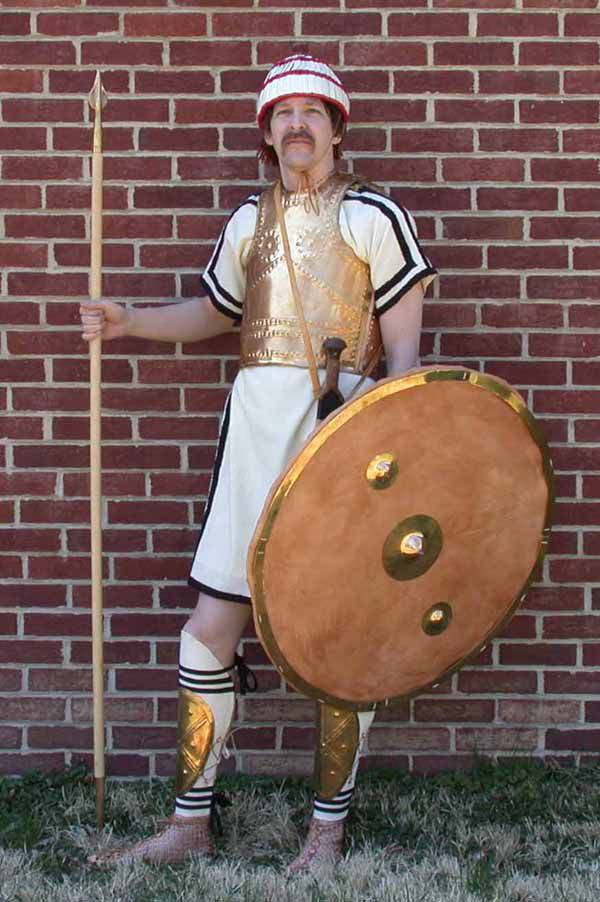 Well, this is a Mycenaean warrior, of course. Dressed, shod and armed in the local fashion! 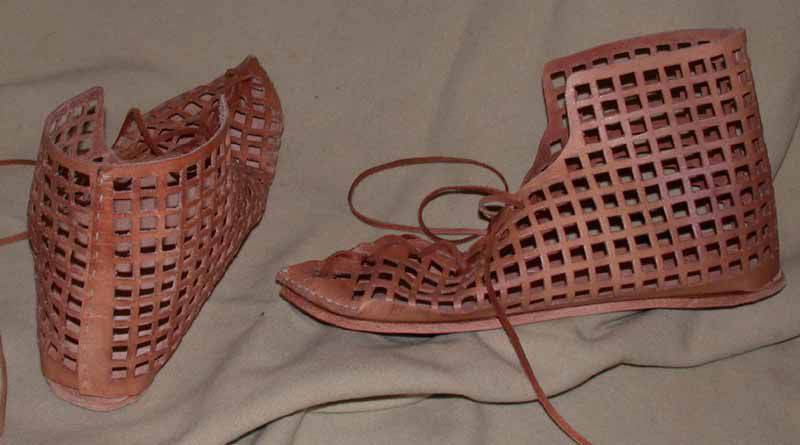 This is his "shoe" (something really looks very modern, I think, but God is their judge)! 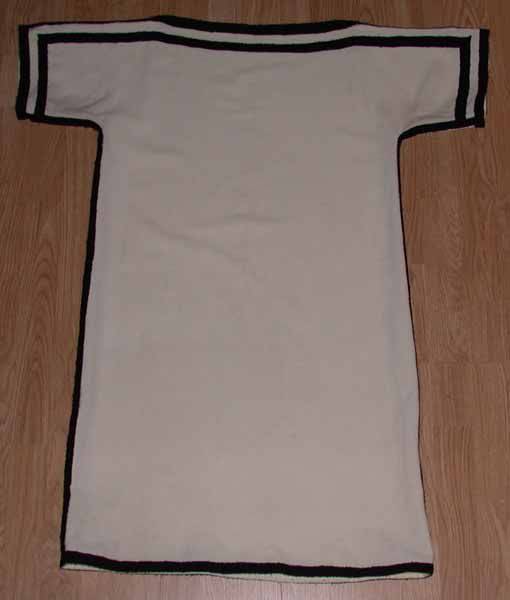 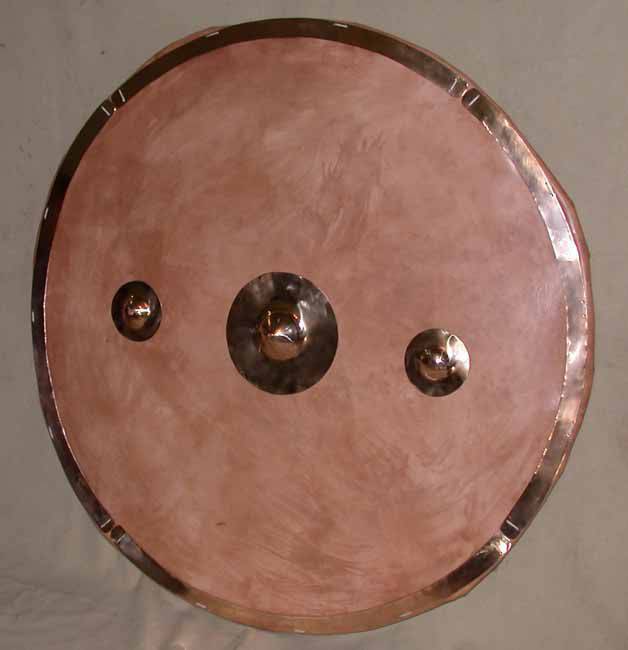 And a shield. And then to him umbons of different styles. 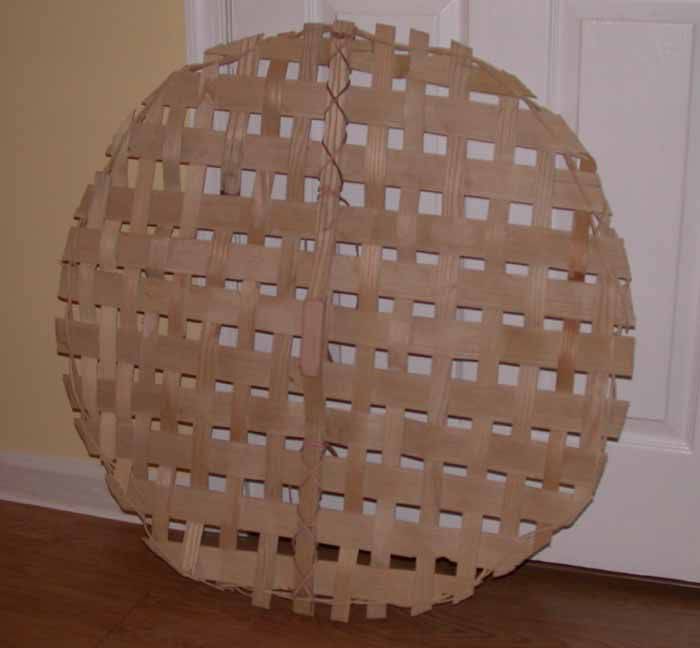 Well, this is his wicker base.

But this is a replica of the shield, which could be used by the warriors of the "peoples of the sea" and the sherdans from Egyptian reliefs. The base of the shield is a braid of slats covered in leather with a bronze rim around the edge. The wetted skin is well stretched and straightened, and soaked with hot wax becomes waterproof. There are three bronze umbrons on the shield. His total weight is 7 pounds 12 oz. So it is not very heavy.

Warrior with ... "warrior vases." It is possible that he looked that way.

However, inaccuracy immediately catches the eye. Not that shield! On the vase, it is cut from the bottom and ... now we see how its replica is made. First, the base of the shield is glued from boards that are turned around the edges. Then the tree is covered with leather, riveted umbon and handle. 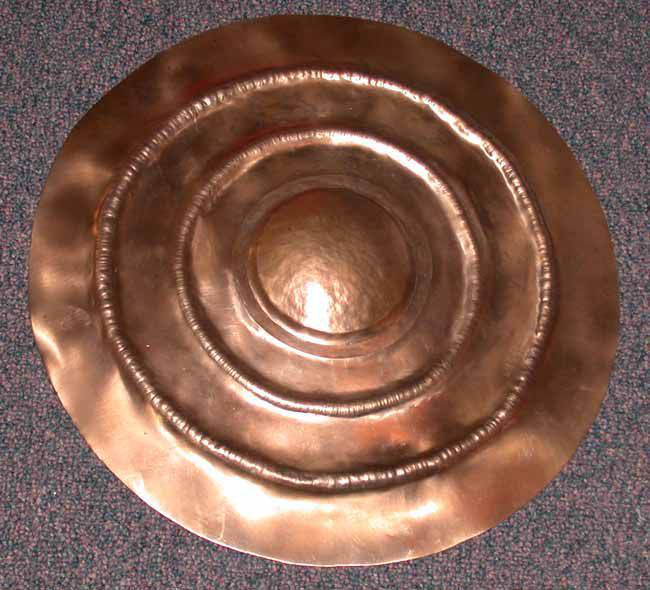 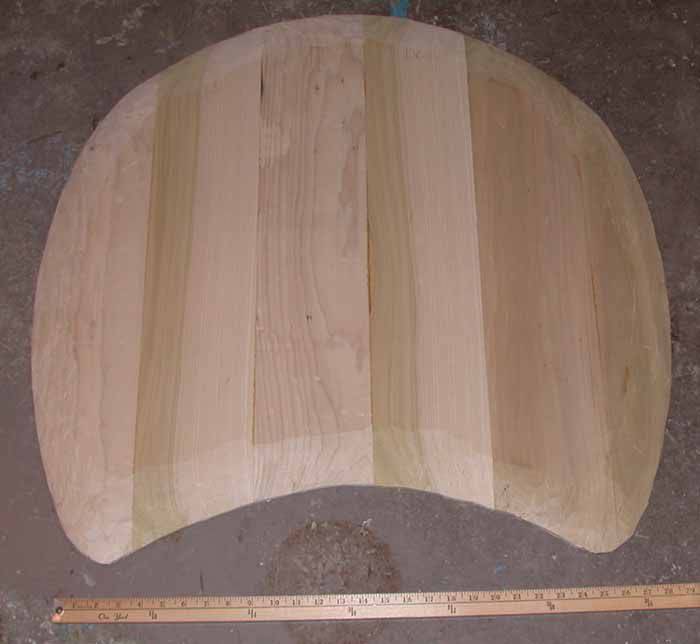 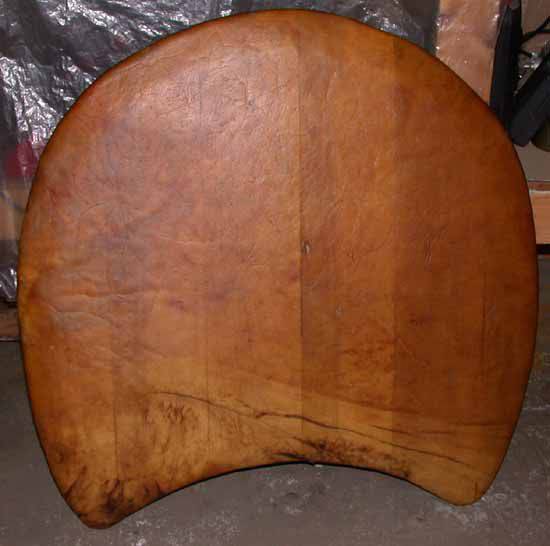 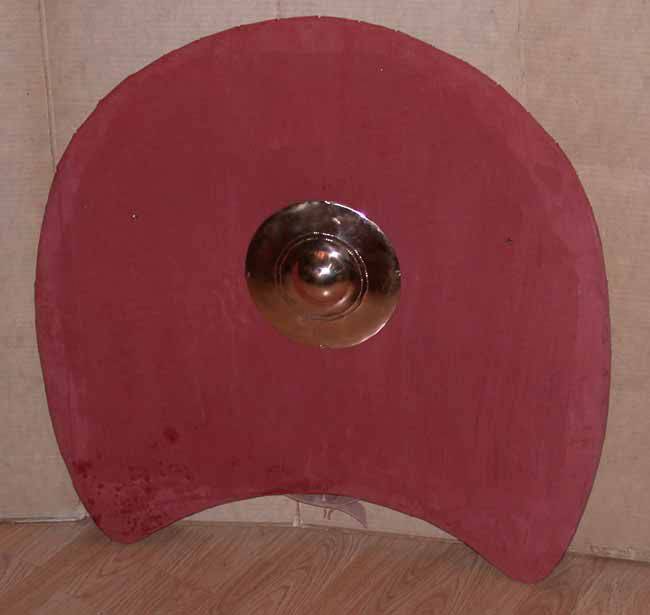 And, finally, we get the finished shield.

But a replica of the shield and armor of the work of the already known to us Greek reenactor Katsikis Dimitrios. His shield is a simple “pletenka” in the manner of a bottom from a basket, covered with goat skin with fur outside. The shield handle closes the umbron, and three smaller umbons are attached not so much for protection, but for beauty. The armor of the warrior - Dimitrios himself calls them "armor of Menelaus", made of leather with numerous umbrellas superimposed on them. 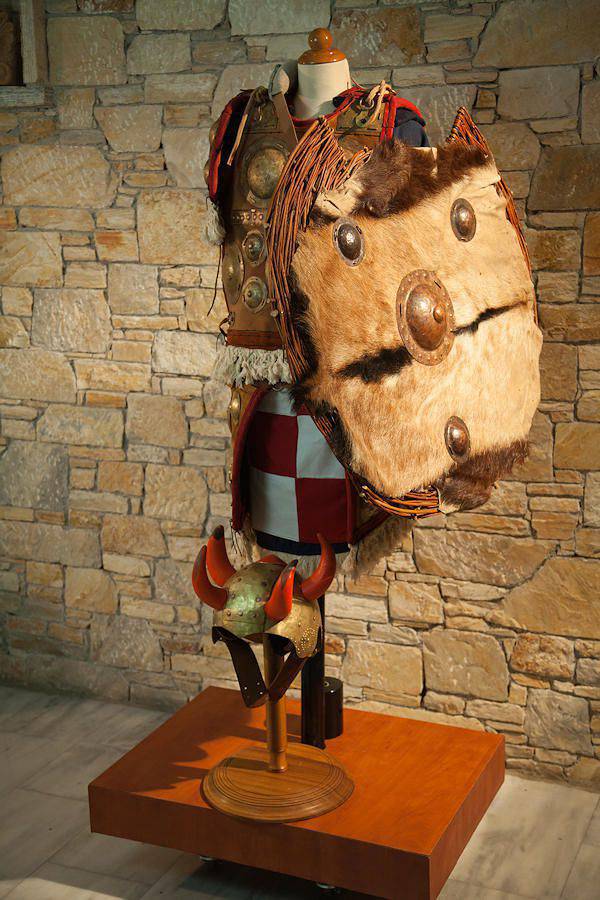 "Armor of Menelaus" - view of the front side of the shield. 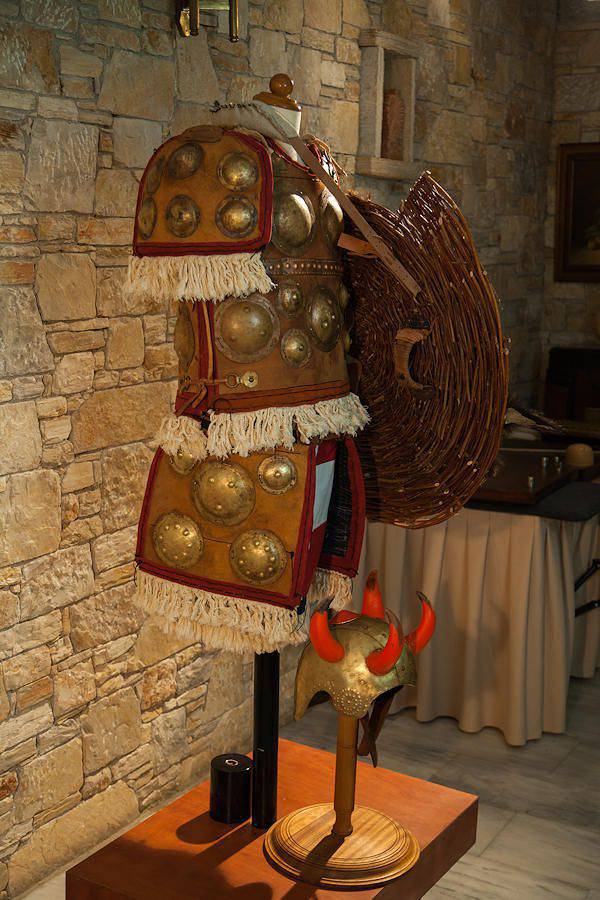 "Armor of Menelaus" - view of the back side of the shield. 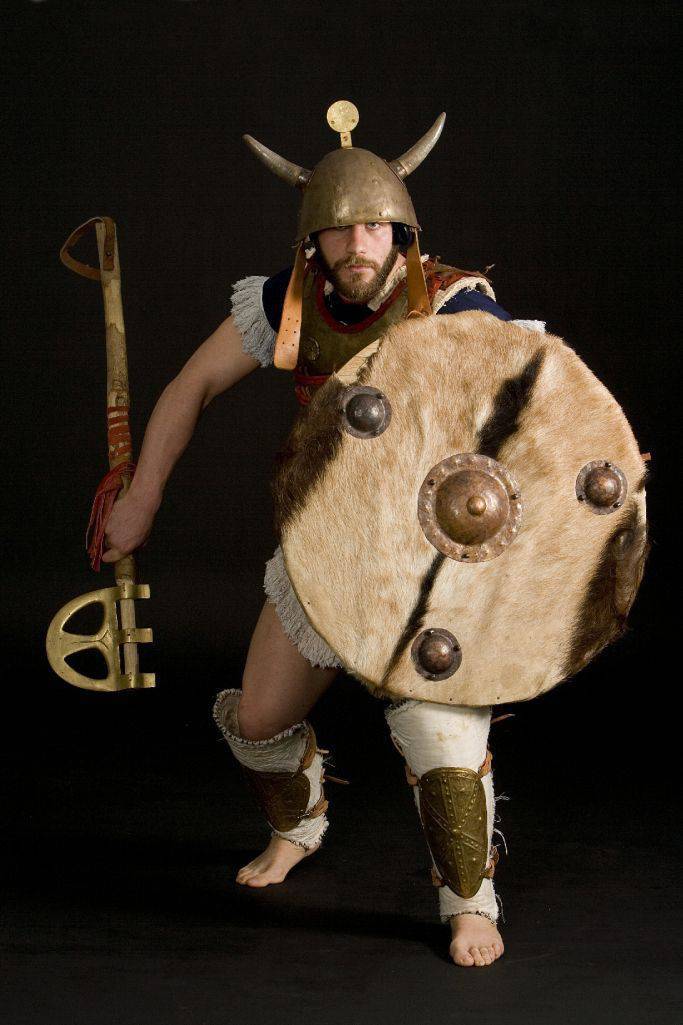 His work is also the “Warrior of the“ peoples of the sea ”(shardan).
At the “legs” of the “armor of Menelaus” we see the original four-pointed helmet, But this will already be the topic of the following material ...

The author thanks Neil Barridge (www.bronze-age-swords.com) and the site http://www.larp.com/hoplite/bronze.html for the photos and information provided by the Greek reenactor of the armor Katsikis Dimitrios (http: // www. hellenicarmors.gr), as well as the Greek Association for the Study of the History of Korivantes (koryvantes.org) for the photos provided.

Ctrl Enter
Noticed oshЫbku Highlight text and press. Ctrl + Enter
We are
Once again on the issue of reconstructing the weapons of the era of the Trojan War. Warriors in armor and helmets (part 12)Weapons and armor of soldiers of the Trojan War. Swords and daggers (part one)
Military Reviewin Yandex News
Military Reviewin Google News
49 comments
Information
Dear reader, to leave comments on the publication, you must to register.