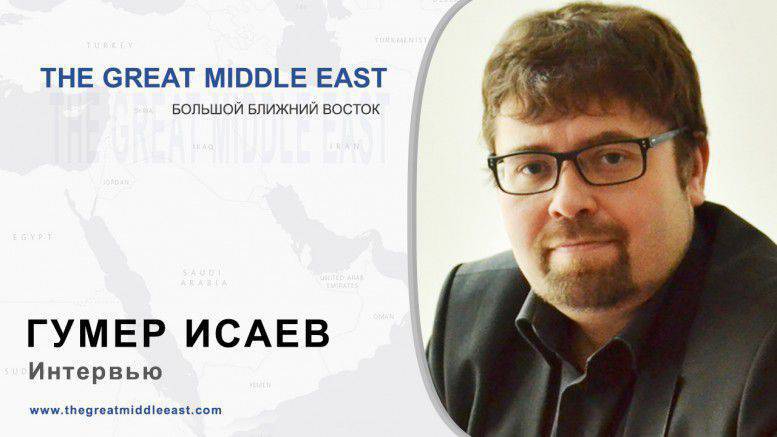 The Middle East is experiencing hard times, conflicts, contradictions and terrorism are tearing apart the region. It is already clear to everyone that there will be no former Middle East, with questions what is actually happening and what can be? We turned to the head of the St. Petersburg Center for the Study of the Modern Middle East Gumer Isayev.

At the moment, there is an almost total reformatting of the entire Middle East, the old system is collapsing, the new one is not yet completely clear, what do you think is waiting for the region? What are the prospects for the current process?

What is happening in the Middle East in recent years is not only a process of changing one regime by another. We are witnessing the collapse of the system, the foundations of which were laid in the early twentieth century. The once “progressive” regimes collapsed, Arab nationalism died, and the phenomenon of a sovereign Arab national state itself, apparently, may soon become the property stories. Such countries as Libya, Iraq, Syria and Yemen are defragmented and there are doubts that they can be saved de facto as united and centralized states.

The expected and forecasted by the liberals new wave of democratization of the region during the “Arab spring” turned into chaos, from which we can expect the coming of new dictatorships. In my opinion, destabilization in the region will last for a long time and may affect those countries that seemed to avoid the negative effects of the “Arab Spring”.

There is an opinion that, the notorious ISIS, is nothing more than a tool of the United States in the region, for carrying out your own policy, the essence of which is to throw the region into chaos, do you agree with this point of view?

ISIS resulted from chaos, as a result of the collapse of the national states of Iraq and Syria. The United States played a role in the destruction of Iraq’s statehood, where, after the redistribution of power in a country with a Shiite majority, the Sunnis lost their former position in society.

Thus, ISIS has become a kind of Sunni revenge, dressed in a radical and extremist form. We see the example of the civil war in Syria, as the superpowers tend to use different groups in their own interests - and ISIL is not an exception. For a long time, ISIS was spun up and promoted in the global media and, in my opinion, this was not done by chance. Today, the “threat of ISIS to the whole world” is used as a basis for intervention in the Syrian crisis. Officially, all countries involved in the Syrian conflict declare a special mission in the fight against LIH, but in reality each player acts in his own interests - hence the tension between those states that seem to have come together in the fight against the common threat.

As you know, in the near future in one of the main countries of the Middle East to hold parliamentary elections, which should play an important role in the political life of the country. This, of course, is about Turkey. Given the difficult situation in the country and around it, what do you think will give these elections to Turkey and what will be the result?

A curious situation - the Turkish authorities have forbidden to make predictions about the results of the elections that will take place on November 1. Apparently, the winners of the previous elections fear the results, having in their hands the data of social surveys. The elections to the Turkish parliament are unscheduled and, if I may say, crisis: the June elections did not give the Justice and Development Party a majority to form a cabinet of ministers. During the summer, the parties that passed the parliament could not find a compromise solution and preferred re-election of the coalition.

New elections will be held amid the refugee crisis, the acute conflict with the Kurds, the fall of the Turkish lira, a series of terrorist attacks, including resonant bombings in Ankara - and today it is difficult to predict how all this will affect the voting figures. If the results are not significantly different from the June ones, the parties that have passed to the parliament will still have to find a compromise solution and create a coalition.

Ctrl Enter
Noticed oshЫbku Highlight text and press. Ctrl + Enter
We are
A great interview with Sergey Lavrov: about Ukraine, Obama and IranWhat you didn't want to know about England
Military Reviewin Yandex News
Military Reviewin Google News
21 comment
Information
Dear reader, to leave comments on the publication, you must to register.