Germany strayed from the hands?

October 28 2015
21
According to the influential British newspaper The Financial Times, which cited its own sources, the US Department of Justice and the Financial Services Department of the State of New York suspect Deutsche Bank of violating prohibitive policies against the Russian Federation. We are talking not only about the likely violation of the sanctions regime, but also about the "money laundering". A US investigation concerns Moscow-London deals worth six billion dollars. Some experts believe that behind the American "checks" lies political overtones. 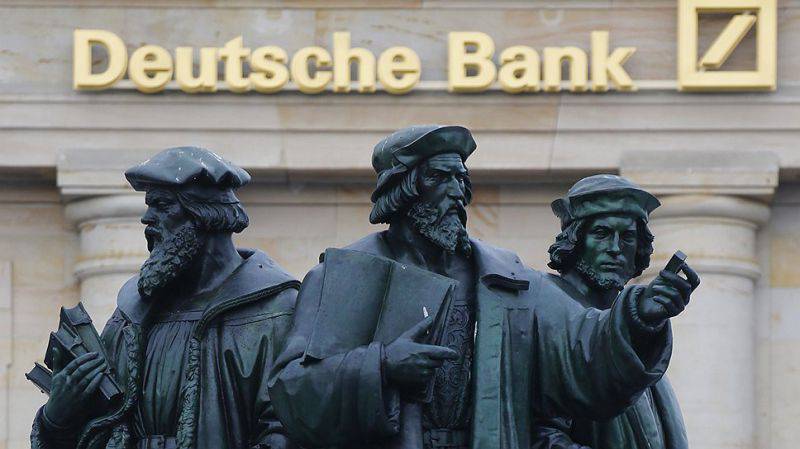 As reported with reference to informed sources Financial TimesThe US Department of Justice and the New York State Department of Financial Services are conducting an extensive investigation into the activities of the Deutsche Bank's Moscow branch. 6 transactions worth a total of billions of dollars are being studied by US specialists to check money laundering and determine if the bank violated the sanctions regime imposed on Russia.

What would seem to be the case of American justice to the German bank? It turns out that a plausible excuse was found: dollars were involved in other “suspicious” transactions, and US citizen Tim Wiswell was involved in the transactions. Americans are also not sure about the accuracy of the statements of the German bank. US justice is even interested in whether the Russian branch of Deutsche Bank allowed to withdraw money from the Russian Federation. Here it is, a pretext: The US Department of Justice believes that transactions with derivatives covered the illegal withdrawal of funds from Russia!

What kind of operations came under a magnifying glass of financial inspectors? US authorities, according to the publication, are studying "mirror transactions." Their scheme is as follows: Russian clients of a German bank bought securities for rubles at the Moscow office of Deutsche Bank, and later sold them for foreign currency, including US dollars, through the London office of the bank. The “main hero” of the investigation was the aforementioned Tim Wiswell, who had previously headed the stock department of Deutsche Bank in Russia (he was previously removed from office following an internal investigation).

The main goal of the detectives is clear and transparent: to receive an answer to the question of how well Deutsche Bank monitored the observance of the sanctions regime against Russia and notified the banking regulators about this.

The British edition reminds that among the Russian clients of the German bank were the brothers A. and B. Rotenberg: both are on the US sanctions list. Meanwhile, the sanctions imposed by Washington on Russian legal entities and individuals prohibit US citizens and companies from maintaining business relations with those sanctioned, especially in cases where the transactions are in dollars.

As indicated RBCIn mid-October, Bloomberg reported that people from Putin’s inner circle could benefit from Deutsche Bank's mirror transactions. Sources of the agency noted that Arkady and Boris Rotenberg could be a benefit.

"Prime" recalls that at the end of May 2015, a representative of a German bank, Anke Fail, reported that Deutsche Bank had information about possible money laundering through the Moscow office and was conducting an internal investigation. It was at that time that the Moscow office of the bank suspended several employees from work.

Journalists "Business FM" interviewed Ekaterina Dukhina, a lawyer with the Russian branch of Deutsche Bank. According to her, there were no “non-standard transactions”, including those related to T. Wiswell. Quote:

“There were no non-standard transactions, especially situations at work, which were not connected. Neither he nor his team participated in anything even close to this, which, coupled with the journalistic investigation that has already been carried out, suggests that the problems are definitely not in the transactions and operations themselves, but the problem is in those the end of these operations is foreign regulators. And, strictly speaking, in connection with this situation, one way or another, they began to try to apply separate sanctions to the bank. All operations were carried out on behalf of and in agreement with the London office. Neither Tim nor the team had any opportunities to carry out any independent actions that would not be consistent with the general policy of the bank. Therefore, it is absolutely obvious here: several other forces are fighting between each other, and Tim just found himself between them. ”

“Other forces” - it must be assumed that the American “overlord” decided to educate the obstinate “vassal,” that is, Germany. Climbing across the ocean and checking into branches of a German bank - only “exceptional” can afford it. And indeed: Washington establishes sanctions against Moscow, and Germany and other "vassals" in Europe support. If you live under the American stick, as Berlin lives, then from time to time you will receive this stick along the ridge.

That is why Russian experts are talking about the pressure that the American side exerts on Europe.

“Many European companies are under serious pressure from the United States,” said "Free Press" Sergei Samuilov, head of the Center for Foreign Policy Studies of the United States Institute of the USA and Canada, RAS.

According to the expert, US laws allow Washington to investigate the activities of foreign banks that interact with the Fed and US banks. “It is clear,” says Samuilov, “that such laws reflect Americans’s perception of their own exclusiveness and their own superiority over all.”

According to the expert, in the case of Deutsche Bank, there is an obvious political undercurrent. The check was one of the financial levers of pressure on Germany. The goal is not to punish a specific bank, but to “rein in” Merkel.

Washington believes that recently the German authorities have shown excessive autonomy - in the case of the Ukrainian crisis, and in the case of refugees from the Middle East. The investigation of Deutsche Bank’s activities is aimed at “disciplining” all of Germany.

There is another opinion.

“Europe and the United States remain allies in all these scandals with wiretapping and sanctions,” said Alexander Kokeev, senior researcher at the European Political Studies Department of the IMEMO RAN, told SP. - In a narrower sense - all are members of NATO. In a broader - they represent the Western world. Germany’s dependence on the United States persists in many ways. It is not the same as it was during the cold war, but it remains. ”

According to the expert, it’s hard to say how Deutsche Bank is connected with American financial institutions. However, it can be stated that there is no particular dissatisfaction on the German side with American verification initiatives. And indeed, the Germans themselves recently checked this bank to see if it was violating the sanctions regime against Russia. “The main thing,” the expert noted, “is that the opinion on anti-Russian sanctions in Germany is quite united. It is also united in the European Union as a whole. Everyone believes that sanctions should be maintained until the situation in Ukraine changes. ”

Thus, it is too early to talk about the "biased" verification by Americans of the activities of a German bank. We must wait for the results of the investigation. Inspectors do not make any indictments, but only talk about suspicions. In fact, the first investigation at Deutsche Bank was initiated by Germany itself: reports of possible money laundering through the Moscow office of the bank and the start of an internal investigation appeared in May 2015.

But be that as it may, any such overseas financial audit also means checking the European partner "for lice." If the bank has deviated from the sanctions regime against Russia even for a micron, a severe punishment awaits it. Of US retaliation, if it overtakes the perpetrators, the US Justice Department, of course, will notify the world community.

Observed and commented on Oleg Chuvakin
- especially for topwar.ru
Ctrl Enter
Noticed oshЫbku Highlight text and press. Ctrl + Enter
We are
The Germans found the hand of Americans in their pockets and now suspect a senior partner in waging an economic war.Projection of force
Military Reviewin Yandex News
Military Reviewin Google News
21 comment
Information
Dear reader, to leave comments on the publication, you must sign in.