The first successful use of Russian attack aircraft

October 28 2015
10
In the summer of 1915, the Austro-German troops carried out a breakthrough of Gorlitsky, forcing the Russian armies to retreat. The armies deployed on the Galician front retreated under the blows of the enemy to the northeast, to Yaroslav - Kholm - Brest-Litovsk. By 12 July, 3-I and 13-I Russian armies retreated across the Bug River, where they were going to organize defense, using the natural water barrier, as an excellent line of defense.


Already during the First World War, the favorite method of action by the German command was operations carried out at the junctions of adjacent enemy units and formations. During World War II, the Germans seriously developed this tactic through the use of large masses of mechanized and tank connections. The strikes delivered at the junction of armies and fronts (at their junctions, the unity of action and communication between adjacent units and formations was often difficult), made it possible to successfully split the united defense front, which forced the Russian units to roll back. It was precisely such a blow that the German command hoped to inflict at the junction of the 3rd and 13th armies near the town of Wlodawa.

At that time, the commander of the 3rd army of three corps aviation there was only one combat-ready detachment - the 31st corps aviation detachment, which consisted of 5 aircraft. This detachment had to solve a wide range of various combat missions alone. 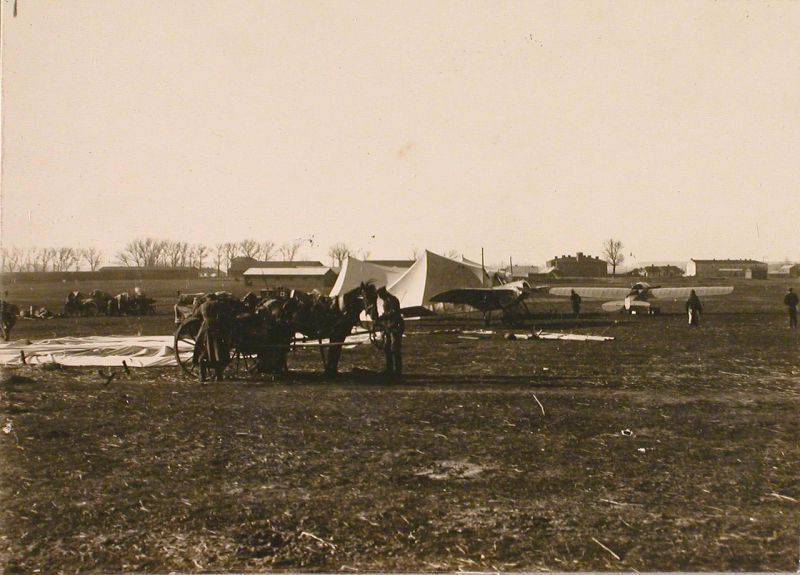 It is worth noting that by the beginning of the First World War, the Russian Empire’s army had air forces that were consolidated into 26 corps (plus 1, 4 and 5, Siberian air squadrons, 3, field squadron and guards squadron squadron) and 8 fortress squadrons. According to the state that was approved by the 19 Military Council on December 1913, each corps squadron was supposed to include 7 pilots (5 officers and two soldiers). According to the approved standards, each of the corps aviation squads had to have 6 airplanes (8 fortress squadrons), four sets of spare parts, two spare engines, gasoline stock 240 poods (1 pood = 16,38 kg) and castor oil 50 poods in wartime (480 pood = 100 kg) and castor oil XNUMX poods in wartime for fortress squadrons - XNUMX and XNUMX pounds, respectively).

At the same time, each aviation company had to store gasoline and oil in the form of a reserve in case of war - from 2000 to 3500 pounds (depending on the number of assigned aviation units). Thus, by the beginning of World War I, 39 6 poods of gasoline only had to be in the 25 aviation squads and 280 aircraft fleets. In practice, it was possible to procure and send the entire 4640 pounds to the aviation units of the Russian army. This negatively affected the actions of Russian military aviation in the first stage of the war.

In addition, there was a shortage of personnel in the squadrons (30%). Under the 203 staff, the pilot-pilot and the 86 pilot pilots at the beginning of World War I actually had 200 pilots (the 164 officer and the 36 soldier). There was a shortage of aircraft, according to the state they should have been 250, but according to the General Staff data before the war, Russian armies had 172 aircraft. Although the number of aircraft was partially replenished by mobilization. In July, 1914, the Russian army received a number of aircraft from aircraft factories and aircraft that previously belonged to flying clubs. Moreover, the All-Russian Aero Club formed the Volunteer squadron, staffing it with its own aircraft and pilots, and some volunteer pilots arrived at the army with their aircraft. Thus, directly to the beginning of the hostilities, we managed to assemble 220 aircraft and 289 aircraft engines. 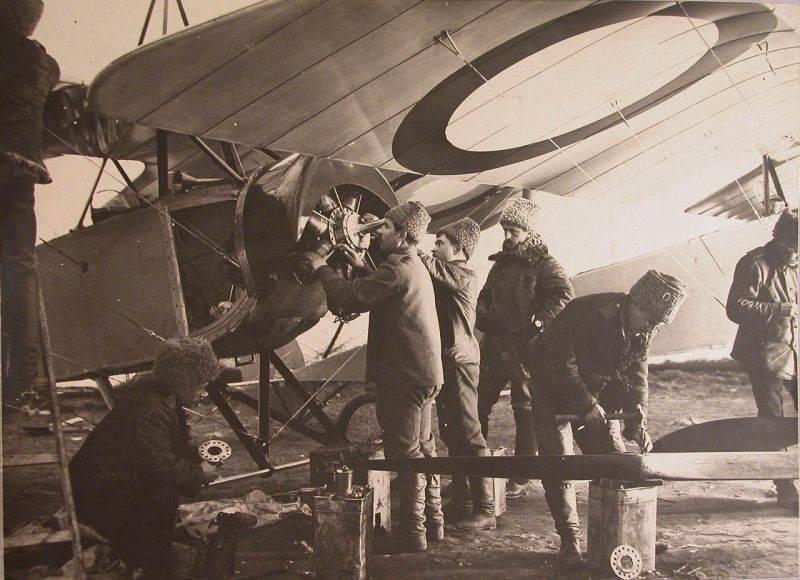 If we talk about the 31st corps aviation detachment, then it was formed after the outbreak of the First World War. February 20, 1915 Aviation Officer School of the Air Department fleet in accordance with the order received, the commander of the Black Sea Fleet was included in the garrison of the Sevastopol Fortress. Within a few days, namely February 25, the Grand Duke held a meeting in Sevastopol, at which it was decided to create two corps aviation detachments on the Southern Front - the 31st and 32nd.

The 31 corps aviation squad at that time consisted of four “Voisin” biplanes and relocated to Sevastopol in mid-March 1915. At the end of the month, the squad pilots began to fly, using the Kulikovo Field and the mouth of the Belbek River as landing strips. The heavy situation and the reinforcement of the enemy on the South-Western Front forced the supreme command to transfer part of the forces there from the south, including the 31 and 32 corps aviation squads, which 1 began to relocate to Lviv in May 1915.

By July 1915, the 31 corps squadron was subordinate to the 3 army and, as noted above, was forced to solve a wide range of tasks, in particular reconnaissance. It was the pilots of this detachment who succeeded in establishing the grouping of the main enemy forces advancing to strike at the junction of the Russian 3 and 13 armies. 18 July 1915 of the year at 5 o'clock in the morning for the exploration went the first aircraft. On approaching Vlodawa, the pilots found no movement either on the left bank of the Bug River or in the villages located near the river. However, having flown off to 25 kilometers away from Wlodawa, the Russian pilots were able to detect the movement of two large enemy infantry columns with artillery, cavalry and transports. The first of the columns was sent along the highway from Voislavitsa to Wlodawa, and the other was on the Holm-Wlodawa highway. In total, up to 1,5 enemy infantry corps were concentrated here. 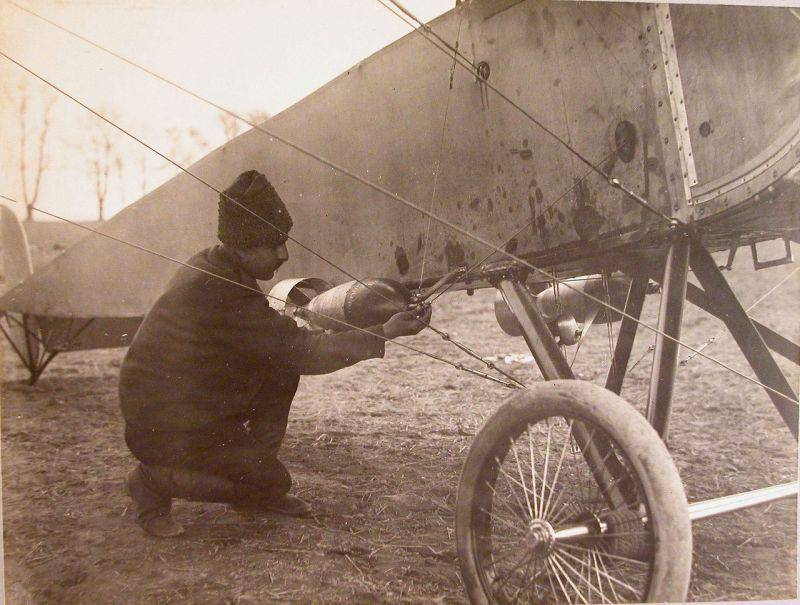 At the same time, when our plane circled over the marching units, the German artillery opened fire on it. The shelling was surprisingly very accurate. A splinter of one of the shells that exploded next to the aircraft damaged the engine, which stopped altogether after a while. After that, from a height of approximately 2,5 thousands of meters, using a fair wind, the pilots managed to overcome 35 kilometers and successfully plan the location of the 13 Army beyond the Bug River. Due to this, the Russian command received valuable reconnaissance information of strategic importance - it was possible to establish the place of the main attack of the enemy. At the same time, the reserve of the 3 Army - the 1-I Guards Infantry Division - was hastily transferred to the supply lines at Wlodawa.

It was obvious that with the dawn of 19 July, the enemy would try to cross the Bug at Wlodawa. However, the reserve in the form of a single division, even if the 1 Guards, is not enough to stop the advance of the Germans. Taking this into account, the Russian command made a tactically new and very competent decision to support the actions of the 1 fighters of the Guards Division with air strikes. At that time, the 31 corps squadron had 250 pounds of bombs at disposal (just over 4 tons). At the same time, the actions of the Russian aviation were to be coordinated with the actions on the ground of the 1 Guards Infantry Division. For the first time there was a real interaction of the air and ground forces of the Russian army. According to the plan of the Russian command, the enemy was decided to give the opportunity to build bridges and partially send his troops on them. After this, the artillery was supposed to destroy the ferries, and the Guards Infantry Division to attack the enemy units that had time to cross. At this time, the aircraft was supposed to carry out assault strikes on the Germans - bombs and machine-gun fire, facilitating the actions of the infantry.

19 July in 6 hours of the morning 5 Russian aircraft 31-th corps air squadron (each had on board 5 poods of bombs) flew to the task. The Germans built three bridges across the Bug, through which large groups began to ferry infantry. Seeing the signal to attack from the 1-th Guards Infantry Division, as well as the beginning of artillery shelling at the Russian artillery bridges imposed by the enemy, the pilots also went into battle. Acting as a single group, under the direction of the commander of the aviation detachment, aircraft from a small height - 250 meters - attacked bridges and ferrying enemy units, shooting infantry with machine-gun fire and bombing. The battle at the crossings went until late evening, during which time Russian aircraft managed to return to the battlefield 6 once again with a full combat load, continuing to attack the enemy.

The moral impact of Russian air assault strikes exceeded all expectations. Some German units simply threw positions and fled back to the river, which was very difficult to swim under the fire of Russian artillery. A curious detail is that the distinctive sign of the 31 airframe of the air corps was “Adam's head” or Dead Head (German Totenkopf) - a symbolic image of a human skull with two criss-cross bones. It is one of the most famous characters in human stories. He was not only a symbol of death, but also a symbol of fearlessness in front of her face. Initially, the emblem settled down in the 19 corps of the aviation squad, and then in the 31. The pilots put it on the fuselage, wings or rear rudders of their airplanes. Given this emblem, the expression "death from heaven" takes on a literal meaning.

The battle for the ferry continued on July 20, when the Germans threw all their main forces into battle, but they did not succeed - all the attacks were repelled. At the same time, the German troops in this area suffered such a heavy loss that a lull was observed at the front for a whole month. And this was in conditions when every extra day was of great importance - Russian troops left the “Polish balcony”. At the same time, the command, taking advantage of the operational pause, was transferring reserves from other fronts, preparing to launch a counterattack.

During the 19-20 missions on July 1915, the pilots of the 31 Corps Squadron for the first time in the history of Russian aviation carried out assault attacks on the enemy, dropping bombs to 250 and spending thousands of rounds of 3 cartridges. Without exaggeration, this squad has become a precious resource in the hands of the Russian command, not only of the 3 Army, but of the entire front. By his actions, he provided an invaluable service to the entire front, ensuring the implementation of operational and strategic objectives. Therefore, July 19 (August 1 in a new style) can, without exaggeration, be considered the birthday of Russian assault aircraft. 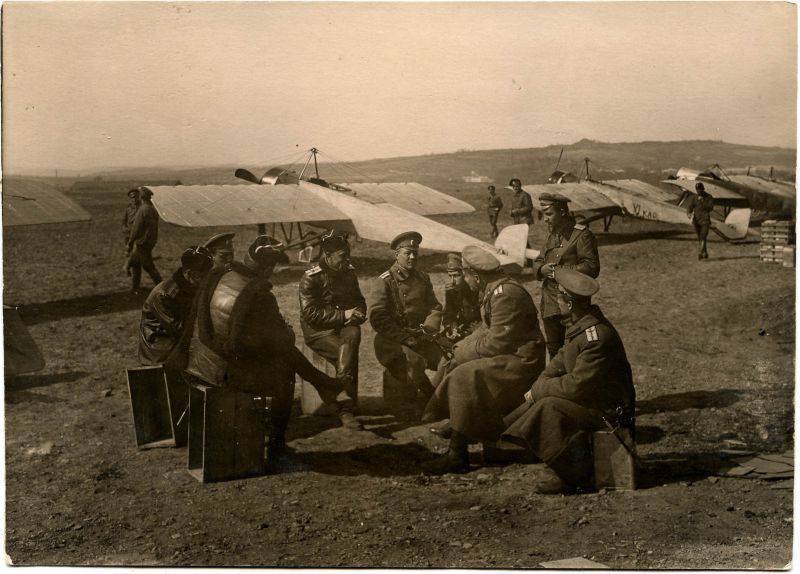 Firstly, thanks to the pilots, the front command was able to obtain information in a timely manner (the intelligence results were confirmed by photographs) about the advance of the enemy attack force on the frontline section of the 3 Army. Thanks to this important information, army and front reserves were promptly pulled to the place of the alleged breakthrough. Secondly, the 19 and 20 in July of the 31 corps aviation squad provided substantial assistance to the ground units of the 3 army during a counterstrike at the enemy crossing at Wlodawa. The Russian pilots from the strafing flight attacked German units on the crossings of the Western Bug River, inflicting substantial material and moral damage on the enemy. As a result, enemy units were forced to abandon the crossing of the water barrier and went over to the defensive. The enemy’s operational-strategic plans, the troops of the German 11 Army commanded by Field Marshal A. von Mackensen, were thwarted.

Thus, the only combat-ready aviation squad, which was at the disposal of the Russian troops, became a kind of strategic reserve in the hands of the command, and with its successful and very intensive work contributed to the overall success on an important sector of the front.