The coup in captivity of the "invisible enemy" 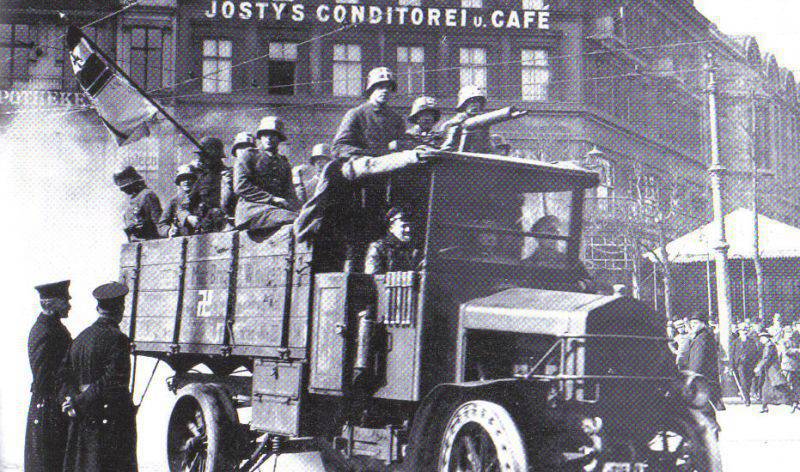 How and why the Kapp putsch failed in Germany in 1920

28 June 1919, the Treaty of Versailles was signed, which legally concluded the First World War. For Germany, his conditions were difficult.

Less than a month, a conspiracy arose among senior officers to revise the Versailles Agreement. The leaders of the future coup were - Junker Kapp, General Luttwitz, Major Pabst, Colonel Bauer, the legendary General Ludendorf was an active participant, although he tried to keep a little away from the events.

Financial and organizational support for the coup was provided by large landowners.

At the beginning of 1920, the Kappas began to probe the ground in the army and police, while simultaneously dismissing those officers who could resist the insurgency.

The important point was that the conspirators were not limited to Berlin and launched underground activities in the province. Opponents of the regime preoccupied themselves with developing orders and appeals to the people who decided to declare immediately after the seizure of power. Of course, they also prepared lists of persons subject to immediate arrest. The plan of operation envisaged a quick takeover of central government offices, the telegraph, telephone, and power plants.

However, the insurgents' preparations did not remain secret from the legal authorities, and 11 March was ordered to arrest key participants in the conspiracy.

Then the game went on the principle of "who is faster." The putschists instantly mobilized their loyal forces and moved to Berlin. On March 13, German Defense Minister Noske gathered officers to discuss the elimination of the insurgency, but the army refused to shoot its brothers yesterday. arms First World. Police also joined the conspiracy.

On March 13, the sea brigade of Ehrhardt, the divisions of generals Hulsen and Aries and a number of volunteer corps entered the capital, and occupied key control objects. Many Berliners welcomed the military. The rebels formed a cabinet of ministers, they informed the people that the old regime had fallen. The new police chief "figured out" with the press.

In their appeal to the population, the conspirators, among other things, declared that the old government was unable to deal with the threat of Bolshevism. 14 March became known and the socio-economic program of the rebels. It was sustained in the spirit of liberalism, it was said about the freedom of entrepreneurship and the abolition of the forced regulation of prices. A strong move of the coup was the announcement to reward all who speak in their defense with arms in their hands.

It would seem that everything went on smoothly, but suddenly it turned out that the government had managed to escape to Dresden. The plot plan gave the first serious failure. The country split into supporters and opponents of the new government, and the last was someone to defend - the legal government existed, which meant there was a formal center of crystallization of all forces ready to resist the Kappa party.

The overthrown ministers and leaders of the Social Democrats published their appeal to the people, in which they called everyone to a total strike. The unions also supported the old government, and the whole country stopped working. Stores closed, paralyzed was transport, including public.

In Hanover and some other cities, the civilian population seized weapons depots; strike committees were set up in key industrial centers under the leadership of the left parties. In Berlin itself, the supply of gas, electricity and water stopped.

The Kapps tried to respond to these actions with repressions, but it turned out that they didn’t have too many forces ready to carry out orders without obedience.

The main part of the army took a wait and did not pass on to any of the parties. And the sailors supported the old government altogether. Here and there, fighting clashes broke out between the Kappans and opposition units. Barricades appeared in the capital.

In addition, the rebels were confronted with the sabotage that the officials had launched. It came to a comedy: the putschists could not even take money from the state bank. Under various pretexts, they were denied financing. A gang of raiders would have coped with this task, but the “formidable” Kappas would not.

March 17 rebels capitulated because they did not control the situation in the country, and could not do anything about it. As Kurchio Malparte subtly noted, Kapp was captured by an invisible enemy. And why?

Because from the very beginning, the putschists lost sight of one of the most important elements of the country's political structure. The presence of socialist parties that had an extensive structure throughout the country, trade union organizations and communist cells allowed opponents to mobilize the masses for sabotage.

It turned out that real power is concentrated not only in ministries; there is another, though not so obvious, but powerful control loop. Planning the rebellion, its participants thought carefully about each move to seize the formally important institutions, but did not bother to catch in advance the leaders of the opposition political organizations.

When the situation was already out of control, the coup leaders realized it and arrested some political leaders, but this measure was overdue, and it was carried out on a very limited scale. The underestimation of the influence of informal structures destroyed the coup, which, it would seem, had every chance of success.

PS When preparing the article, the work of F. Pankechvich was used. “Kapp putsch in Germany”

Ctrl Enter
Noticed oshЫbku Highlight text and press. Ctrl + Enter
We are
Diplomats of the People's Commissariat of Defense: on the eve and during the warWhite emigration. Foreign higher military-scientific courses under the guidance of Professor Lieutenant-General N.N. Golovina
Military Reviewin Yandex News
Military Reviewin Google News
8 comments
Information
Dear reader, to leave comments on the publication, you must sign in.