Distribution of IG is based on oil and drugs 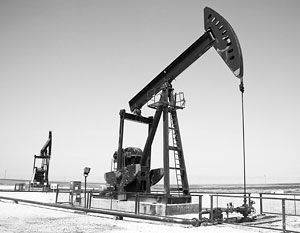 Exploration of Iraq released fresh data on how many earns IG on the illegal sale of oil. The main beneficiary of this contraband is called Turkey. However, the export of oil is not the only way to earn money for the richest of the terrorist organization in the world.


The Islamic State (IG, the activity of this organization is banned in Russia) receives monthly income from the sale of Syrian and Iraqi oil in the amount of 50 million dollars. These are the latest Iraqi intelligence data, reports AP.

Estimates of oil production by terrorists vary significantly. IG revenues from oil exports in 2014 were estimated twice as high - in 100 million dollars. Recently, the Russian blogger Spydell, who does not officially disclose his name, but refers in his materials to a study of official sources and secret documents, points to large volumes of oil supplies by terrorists and, accordingly, to even higher revenues from its sale.

According to him, the volume of supply is about 100 – 150 thousand barrels per day with a price of about 25 dollars per barrel, as the oil brings terrorists at least 2,5 million dollars a day. From his data, almost 900 million dollars in revenues from the export of contraband oil accumulates over the year.

But we must understand that due to the military situation, oil production may be unstable. In any case, in terms of the total world market, even 100 thousand barrels are scanty volumes that may have a weak effect on world oil prices. For comparison, only the three largest oil producers - Saudi Arabia, Russia and the USA - produce 33,9 million barrels per day, and only 88,7 million barrels are mined per day (according to BP data for 2014 a year). 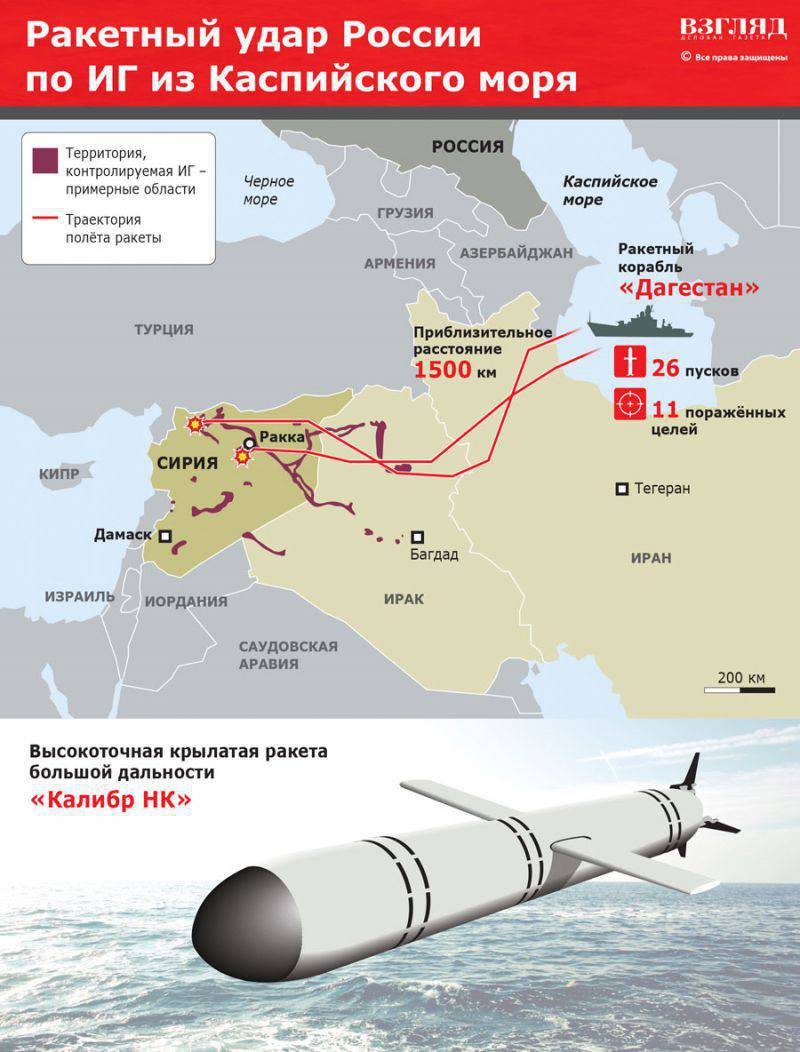 The path of Russian cruise missiles from the Caspian Sea to targets in Syria
How does oil smuggling IG
Oil revenues are the major source for militants financing. Therefore, a terrorist organization not only protects the oil infrastructure controlled by the regions, but also to buy new equipment and invite foreign experts in the oil industry, said the AP.

Last year, for example, there was a vacancy in the Network Manager, which must be able to control production and refining. Terrorists have promised to pay him 255 thousand. Dollars per year, or 21 thousand. Dollars a month, wrote The Times.

In this regard, the IG looks like a large corporation. With one significant caveat - its activities are illegal, oil production and sales - this is only a source of income for the army of militants, and managers working for terrorists do not always survive. Hence, such a high salary.
However, The Times assured that to attract Western oil specialists and such earnings are not enough, rather, it is designed to attract local oil industry workers. At first, the employees were forced to work, threatening to kill their families, and now they were offered a “carrot”, the British press asserted. The reason - in the reduction of staff due to the constant battles.

In the buyers of contraband oil, the terrorists have no end. Because they sell it with huge discounts. Almost two years ago, when a barrel of oil in the legal market was still worth 100 dollars, IG was selling a barrel with an 75-percent discount. Now, when the barrel costs around 40 – 50 dollars, in some cases, terrorists sell oil at 35 dollars, but sometimes they have to lower prices to 10 dollars, notes AP.

"The main sales go to Turkey through the protection of the CIA channels in the United States," said the blogger Spydell.

Also smuggled oil is being transported to Jordan and to Iran through Kurdistan. Moreover, the IG in the literal sense carries oil and petroleum products on cars to nearby regions. They process part of the extracted black gold in the captured oil refineries in the territories under their control. Terrorists also create artisanal distilleries to be important for war. weapon - fuel. Thus, they provide fuel for themselves and the population, and also for sale, apparently, sometimes remains. That is why fierce battles are often fought over the territory where the refineries are located. For a couple of years, battles have been going on constantly in Baidji (200 km from Baghdad), where the largest oil refinery is located. The plant then passes into the hands of terrorists, then returns to the control of government forces.

Who is friends with whom and is fighting in Syria and Iraq
AP source in American circles says that energy infrastructure, as well as equipment for processing and transportation of oil supply to terrorists all the same governments in the region, including Turkey, are buying cheap smuggled oil from the IG.

Other sources of income IG

The sale of oil is one of the main sources of revenue, but far from the only one.

The total annual income of the IG is estimated by different sources in 1,5 – 2 billion dollars and even more. Thus, according to the Israeli Forbes, IG ranks first among the richest terrorist groups with an income of 2 billion dollars a year. Based on Spydell data, a terrorist organization can earn about 3 billion dollars per year. “In general, foreign trade operations (smuggling) bring the IG at least 8 million dollars a day, not counting grants and donations. On the 100, a thousandth group is enough, ”Spydell writes on his blog.

According to him, another source of income is a shadow of the IG grants from the United States, Saudi Arabia and Turkey, plus support for the so-called sympathizers around the world.

No less serious source is the drug trade. The Islamic State terrorist group has gained strength through profits from the sale of Afghan heroin, says the head of the Federal Drug Control Service of Russia, Viktor Ivanov. “In this sense, ISIS is just a cast of these drug-transit criminal gangs, which gained uncontrolled power, including on Afghan drug trafficking,” RIA quotes Ivanova as sayingNews". According to him, precisely because of this, the Russian drug police is in favor of raising the status of Afghan drug trafficking in the UN to the level of nuclear non-proliferation and piracy. Opium production in Afghanistan continues to increase: this year it will grow by 20%, to 8 million tons, the General Staff of the Russian Federation expects.

For oil smuggling and drug trafficking in the bank IG also trafficking (sexual and labor slavery), trafficking in human organs and kidnapping for ransom, indicates Spydell. Thus, in the 2014 20, the IG received million in ransom for the hostages, the report says the US Treasury.

In addition, terrorists haggle art objects from the occupied territories. "Only due to robberies near the city of Nabuk, located near the mountains of Kalamoun, various cultural artifacts (история some go up to eight thousand years) according to various sources, from 20 to 50 thousand dollars per unit of a deal with representatives of the western black market of art objects, ”Arabist Nadezhda points out in his column in the Rabkor Internet publication. Glebova.

Finally, the IG replenishes its budget by robbing state banks in the occupied territories and collecting tribute from the population. According to the US Treasury Department, in the 2014 year, terrorists cleaned out banks for more than 500 million dollars, and earned 600 million dollars in extortions from the public. Taxes have to be paid literally to everyone and for everything: to banks - for security, to the public - for the sale of any product, for withdrawing money in the bank, for communication and for travel. So, the road tax in Northern Iraq is 200 dollars, the customs duty for a truck crossing the Iraqi border with Jordan and Syria is 800 dollars, indicates Glebova.

From raw materials, except for oil, IG, most likely, also trades in gas, phosphates, sulfuric and phosphoric acid, as well as cement, since the terrorists control these plants and factories on their territories. According to the calculations of the Arabist Nadezhda Glebova, based on prices twice lower than the market and the maximum production load, the terrorists can earn on these products about 1,4 billion dollars a year. And on the sale of Iraqi wheat and barley on the black market with 50-percent discount - about another 200 million dollars.

Ctrl Enter
Noticed a mistake Highlight text and press. Ctrl + Enter
We are
List of destroyed the largest and most high-tech enterprisesMissed chapter "Strategy-2020"
23 comments
Ad