Development of armored personnel carriers in Russia: from the first to the present day 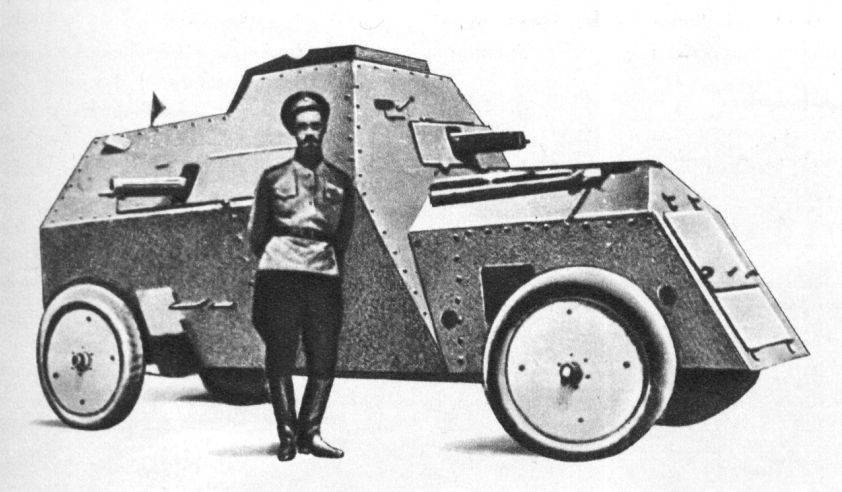 Hello comrades militarists! I would like to devote this series of articles exclusively to the development of armored personnel carriers in Russia: from the first to the most modern.

The idea of ​​fast and safe delivery of infantry to the battlefield worried the military for many years, more precisely, for centuries. Despite the efforts of inventors, engineers and other "Kulibins", the task was impossible. Perhaps you “poke” the author’s nose into information about, say, siege towers; carts covered with animal skins; Da Vinci's cart and say: "You're lying, there were transporters!" And, of course, you will be right, because many researchers stories armored vehicles emit the above military vehicles as the first armored personnel carriers. Regarding the statement that "conveyors were created long before the nineteenth century," one can argue long, but this is not the purpose of this narrative. "Beteers", such as we know them, are obliged to 3 factors: compact and powerful engine, light and strong armor, powerful and rapid-fire arms. And all this appeared at the end of the XIX century. Well, let's start.

The Beginning of the 20th Century - World War I

Historically, the Russian Empire at the end of the 19th and the beginning of the 20th had enormous problems with production facilities. For this reason, many patents have been rejected and sent to the shelves of archives. A serious obstacle to promising military inventions was also the rigidity of the High Command, in particular, the Artillery Committee. Thus, the armored car patented in 1900 by Boris Lutsky on the basis of the truck created by him was not accepted by the military. In turn, the "motor carts" of Lutsky were approved by the emperor himself and purchased by ... the military department. No less interesting was the design of the armored car of the porchesaale Mikhail Nakashidze. The car was ordered by the prince from the French company "Sharron, Girardot e Vois", of which he was a shareholder. It is worth noting that the armored car is not a development of the prince himself. A patent for an armored vehicle with a machine gun turret was obtained by a certain Huyé. Although who cares, right? The car is known as "Nashidze's armored car" ... 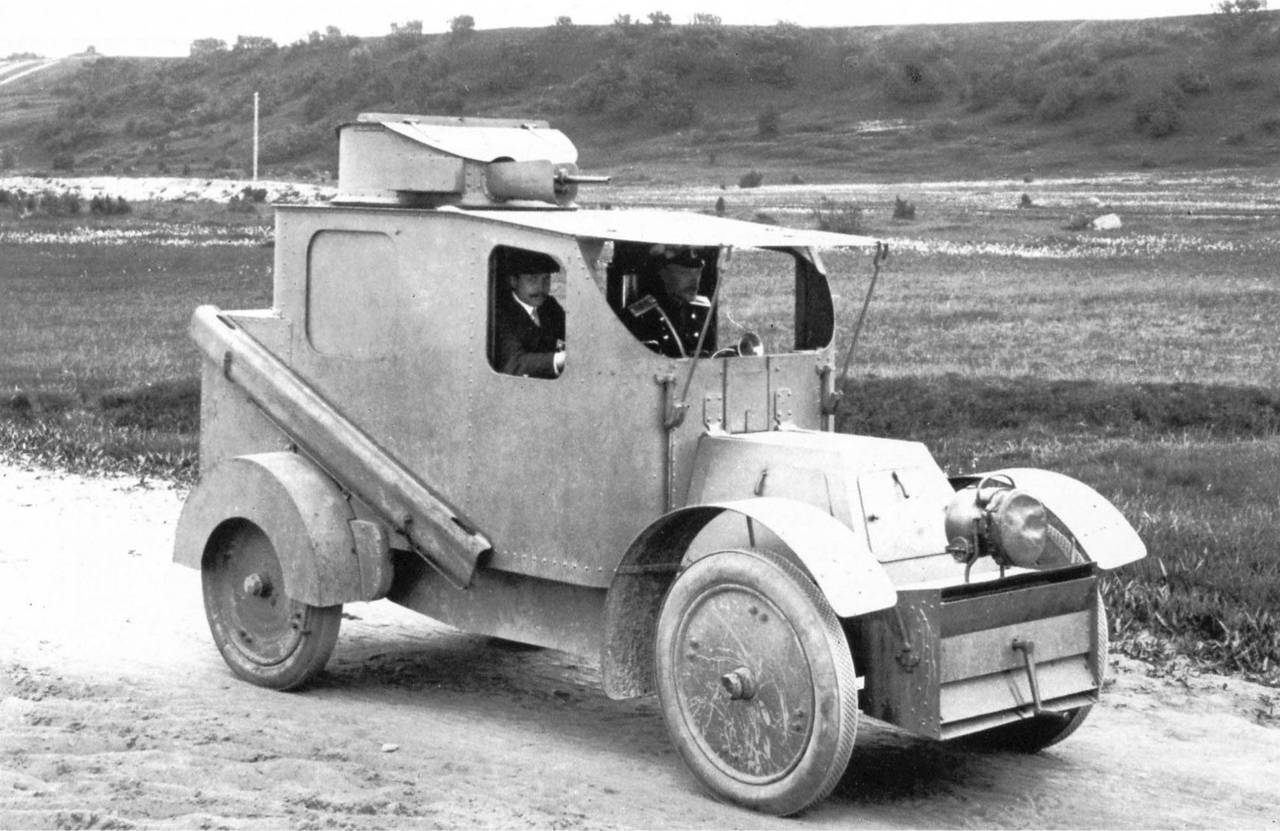 So, the participant of the Russian-Japanese war 1905 of the year offered to test an armored car in battle. For some time, the command of the Manchurian army hesitated, because the car was worth about 30 thousand rubles, which was a considerable amount for those times. Prince Nakashidze himself took the costs. The armored car, armed with one 8-mm Gochkiss, was delivered and ready for trials in a real battle, but the war with the Japanese was over. Then the armored car was delivered to Petersburg for testing. "Nakashidze-Sharron" was poorly appreciated by the military: the car knitted in softened soil; lurched and strove to fall on his side (due to the heavy towers and high profile car); the maximum vehicle speed was limited to 20 km / h, despite the stated 64 km / h (this was due to the quality of the tires, which were stratified when the speed was exceeded in 20 km / h); a huge circle of reversal (diameter about 12,5 meter); the impossibility of shooting on the move played a role, and the project was not adopted. It is worth noting that the armored car is interesting because in addition to the role of an auxiliary fire point, it could perform the function of an infantry carrier (4-5 people in the fighting compartment). According to legend, the prince, at his own risk and risk, ordered the manufacturer of 12 machines. The French managed to send 6 armored cars to the Russian Empire, but they did not “reach” the customer (2 from 6 went to the Germans, the fate of the remaining 10 is unknown). Point on the development of "Nakashidze-Sharron" put the death of Prince 25 of August 1906 of the year during the attempt on Peter Stolypin. 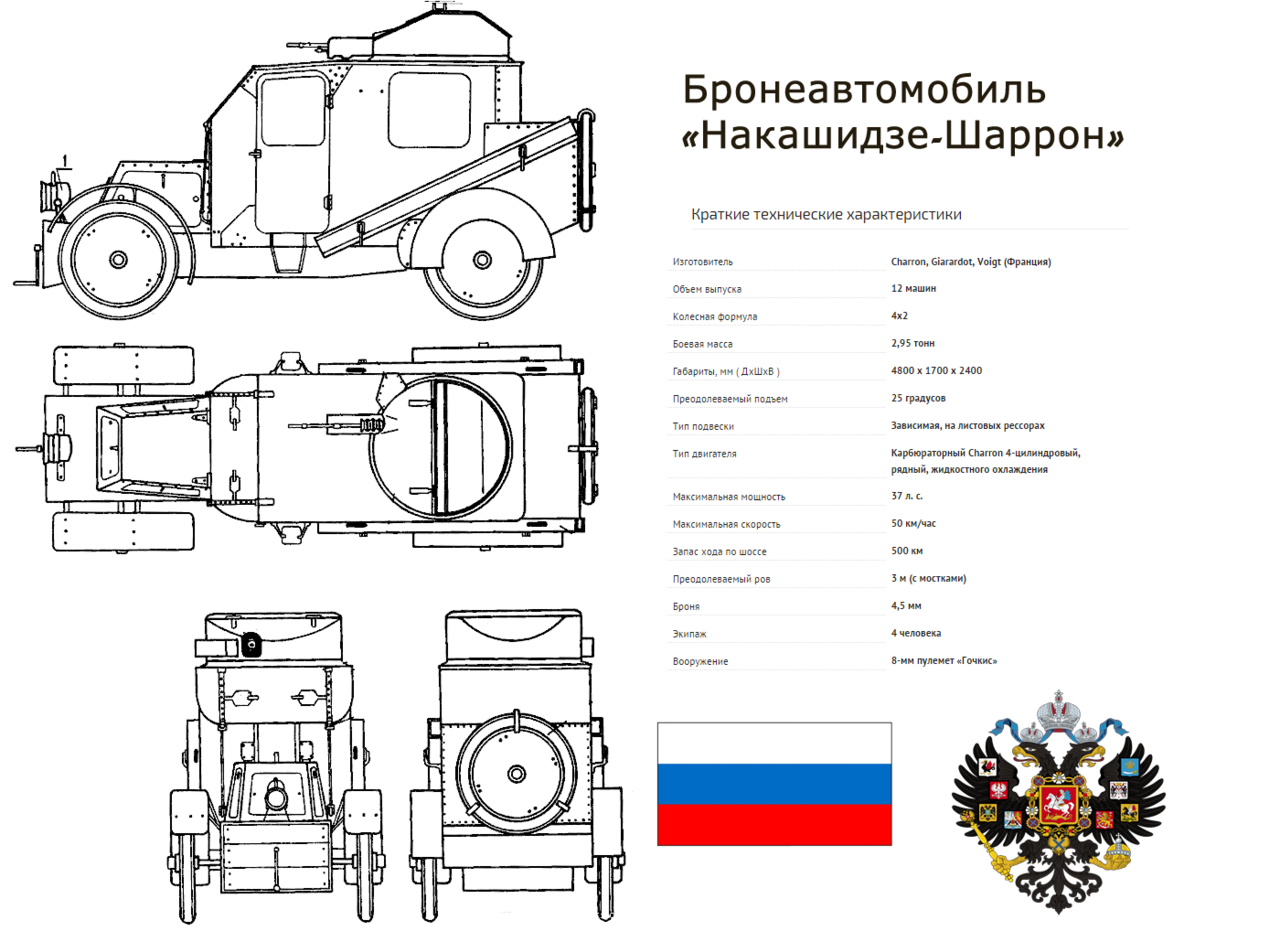 As time went on, the armies, in preparation for the impending war, were rearming themselves at a rapid pace. And so the great war began. The Russian imperial army needed equipment, so the production of armored vehicles began at the Izhora plant as a matter of urgency. In addition to producing its own armored vehicles (Russo-Balt, type C), the plant was engaged in "production" (alteration of civilian cars into armored cars) based on a Garford truck (Garford Putilov), 3 ton packard, Mannesman Mulaga. " It is worth noting that in addition to industrial production, cars were booked in handicraft, in field conditions. The first auto-bullet company, armed with 8 th "Russo-Balt, type C" and three trucks (armored "Mannesman-Mulag" and conventional "Benz", "Oldis"), departed to the 12 front of October 1914 of the year. 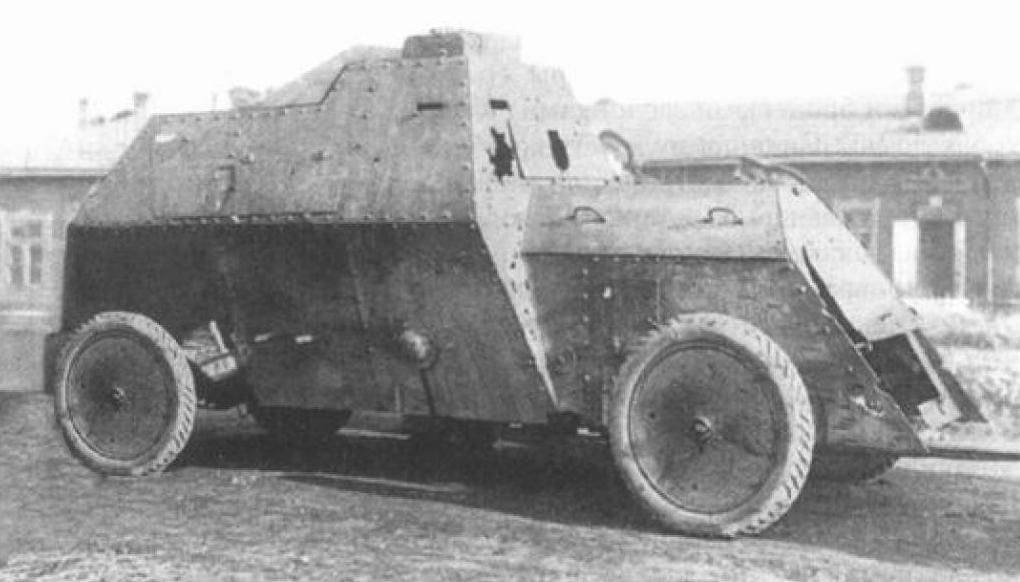 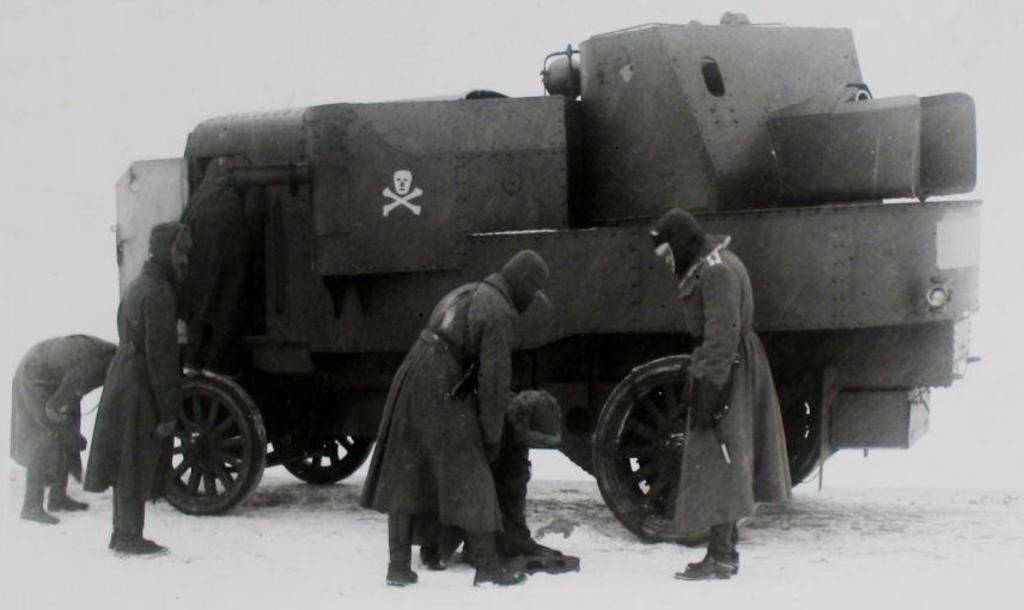 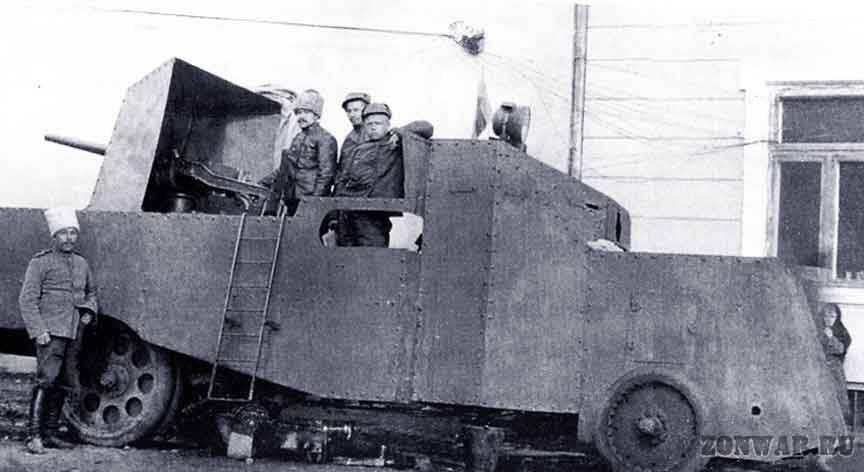 9 November 1915 of the year to the front of the 26-th autobug assault platoon commanded under the command of Staff Captain Viktor Popionko. This combat unit is especially interesting to us - it was completed with one truck "Jeffery-Quod". 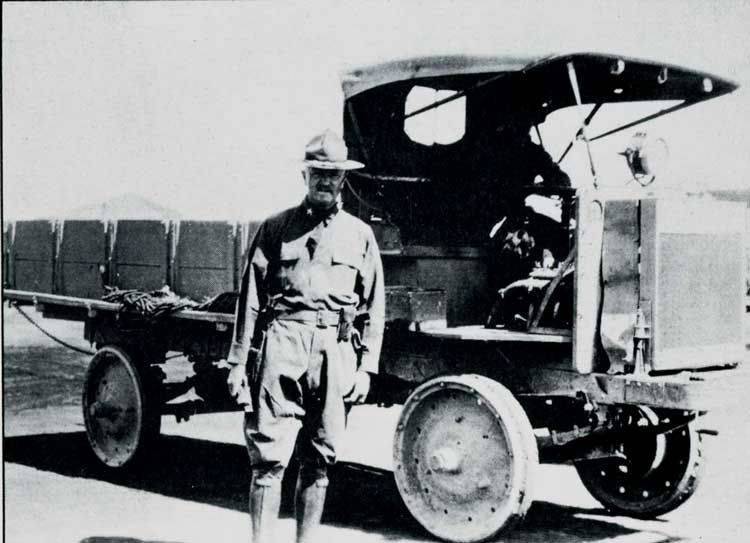 Features of the "American": four-wheel drive, powerful engine (4-cylinder engine with liquid cooling capacity 36 hp), a huge load capacity (two tons of cargo), did not go unnoticed by the initiative captain. So, having booked a truck and installing Maxim's machine guns (in the back of the cab and in the front), V.R. Poplavko created a support machine for bringing ammunition, evacuating damaged equipment. The car, which received the name "Wizard", was evaluated by the military: it easily pulled out even Harold Putilov from the battlefield (weighing tons of 8,5). No wonder, because Jeffery-Kouoda had all the makings of becoming a support machine. Inspired by the success of his armored vehicle, the staff captain in January 1916, upgraded the "Wizard" by installing two cat anchors with cables, a winch, a collapsible bridge. So "Jeffery" became an engineering machine, capable of breaking through several rows of barbed wire and dragging away a "slingshot." 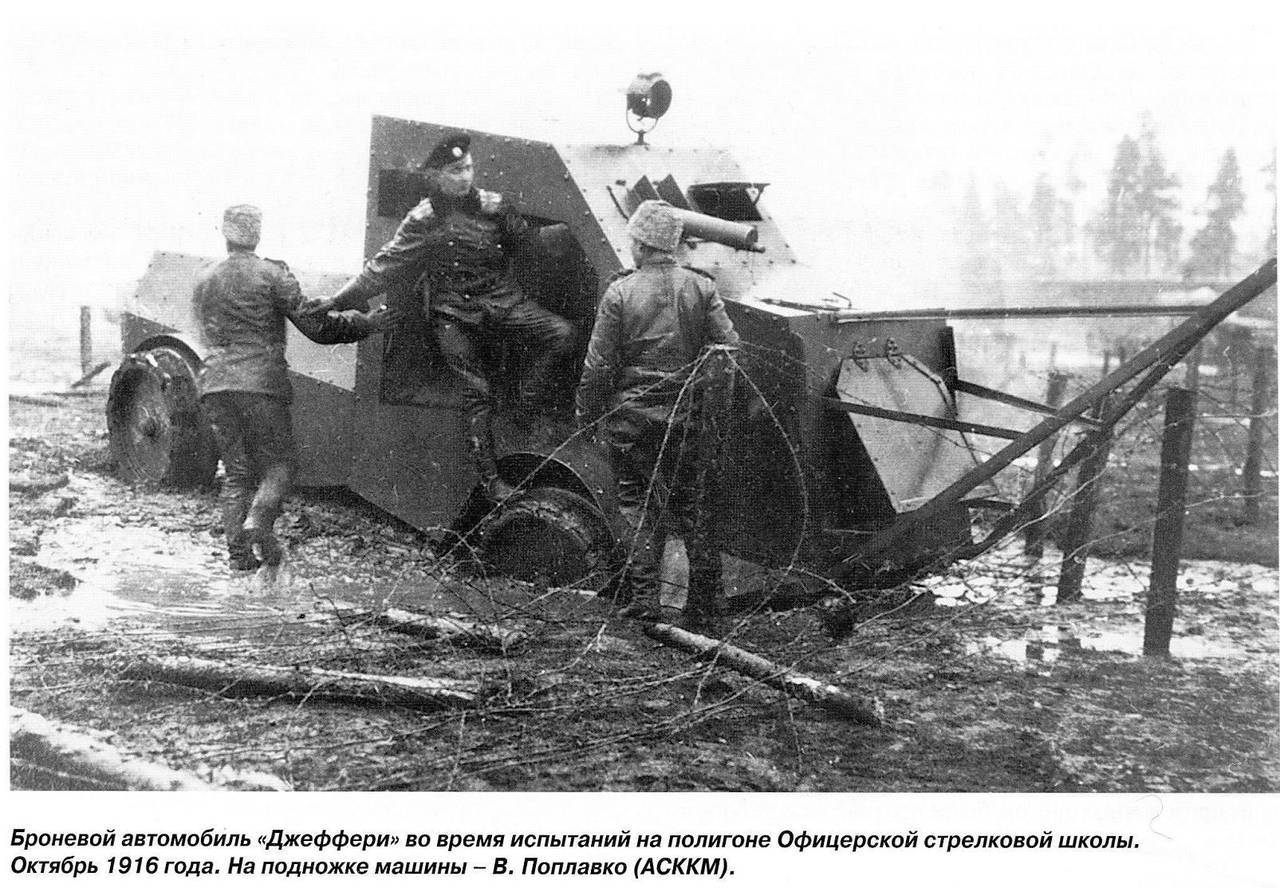 Captain Poplavko, who observed the use of the "Sorcerer", decided to use a powerful armored car as a means of breaking through - the assault force assault vehicle 10 of attack aircraft broke through the lines with barbed wire and moved close to the trenches, from which the landing forces destroyed the defenders and occupied the trenches. Having set out his proposal at the headquarters of the 7 Army and received approval, the captain in the spring of 1916 of the year sends the Wizard to the test. 8 August 1916, Izhora plant received an order for the manufacture of 30 armored vehicles. The order was completed in an early order - by the end of September. Machines produced by Izhorans and received the designation "Jeffery-Poplavko" differed from the design model: the full-fledged landing bay, designed by the captain, was absent as such. But, despite the lack of a compartment, the armored car could still take a couple of people landing. For all the other parameters, the car did not differ from the idea of ​​the author. The body of the car was completely closed and sheathed with steel sheets of thickness 7 mm, which, in turn, were attached to the steel frame with rivets. In front of the car housed the engine, access to which could be obtained both from the outside and from the inside. In the angular cabin, located behind the engine compartment, the driver was sitting on the left, on the right was the car commander, and part-time machine-gunner. Entrance and exit from the armored car was carried out through the door on the right side of the hull. In the rear of the case was an armored box in which it was possible to transport supplies, spare parts, fuel, or ... paratroopers. Armament - 2 machine gun of the Maxim 1910 system of the year with ammunition in 6000 cartridges. 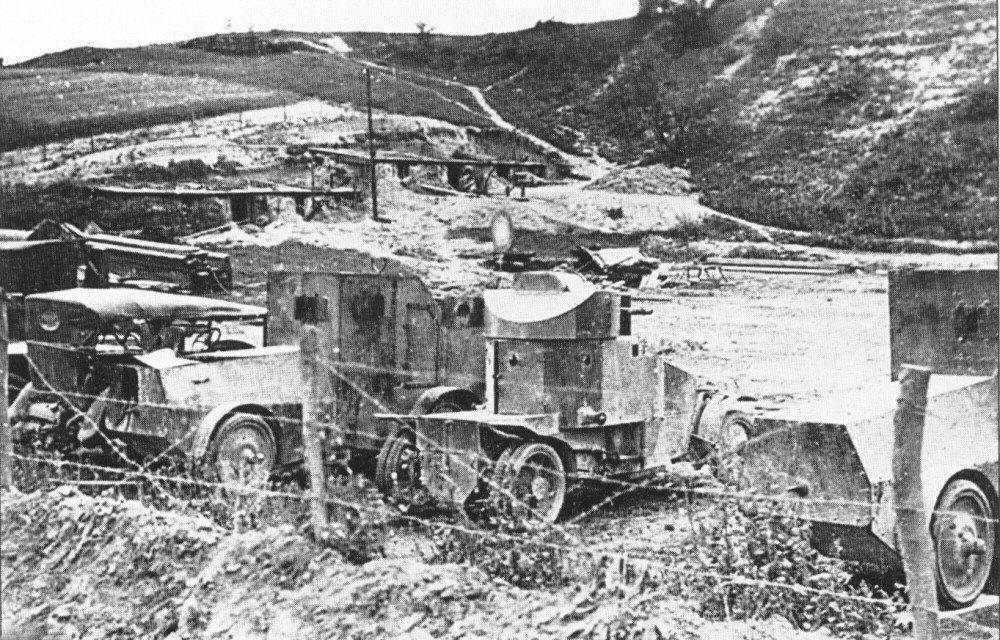 All the assembled cars were combined into a special-purpose armored vehicle division, which included fighting up to 1917, when the Russian Empire "went to pieces". By the way, for the same reason, the Izhora plant was unable to fulfill the second order for 90 vehicles of this type (although they still managed to manufacture one armored car). After the October Revolution, armored vehicles remaining on the territory of Ukraine finally came under the control of the armed forces of the UPR (in fact, the cars were under the control of Ukrainians since March 1917 of the year). "Jeffery Poplavko" for a long time was not under the flag of the Ukrainian Republic. In the 1920 year, after the collapse of an independent Ukrainian state, armored cars "went their hands", but still the majority went to the Red Army, which later was used on all sectors of the Civil War fronts. 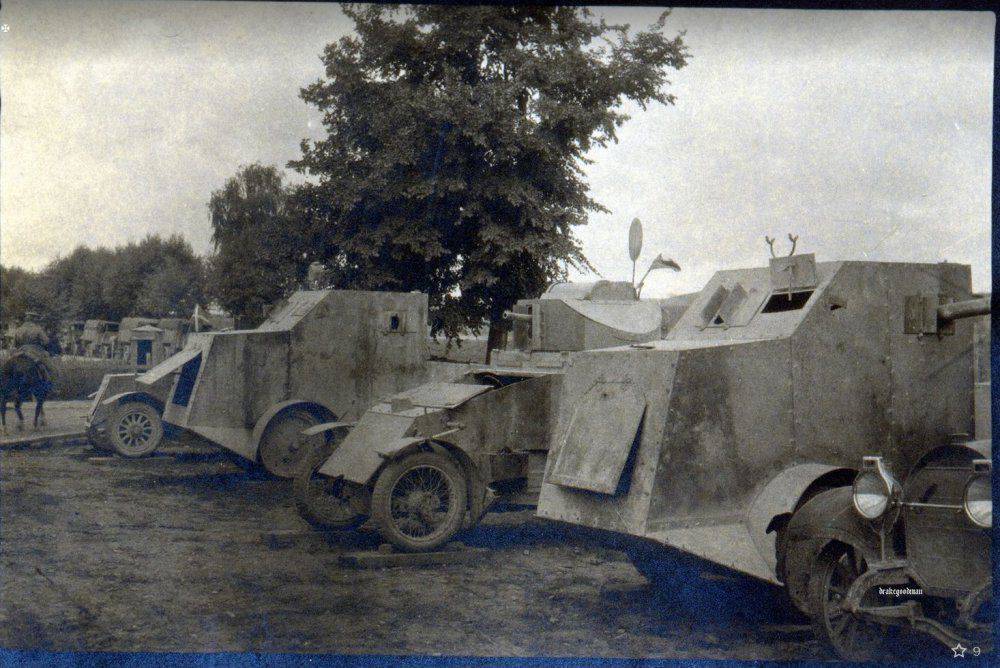 In order to sum up some logical result, I would like to add on my own that despite the fact that the machine was not made and was not used in accordance with the idea of ​​its creator, V.R. Float, an idea embedded in the car, was ahead of its time and proved the need for such weapons in the army of our Motherland.