November 6 2015
4
In the late fifties, many foreign engineers worked on projects for promising jetpacks and other personal aircraft. Some of these projects reached practical implementation and were even produced in a small series, others were destined to remain in stories as bad development. Experts of the American company Thiokol Chemical Corporation also tried their strength in a promising direction. In 1958, they presented their version of a multi-purpose aircraft.


In June, 1958, Thiokol released a press release about its new development. Soon the publication of a new promising product appeared in periodicals. The project of a personal aircraft was named Jump Belt ("Jump Belt"). The creation of a new project led by Harry Berdett Jr. and Alexander Bor. As part of the Grasshopper program (“Grasshopper”), Tiokol specialists developed and offered their own version of a light system that can significantly increase human mobility. Initially, the device was intended for the army, but later it became known about the possible alternatives for its use.

As conceived by the authors, the Jump Belt apparatus could become part of the infantry equipment, seriously improving its mobility. Using this system, soldiers could fly water barriers of sufficiently large width in a matter of seconds, climb various objects, such as rocks or buildings, as well as overcome other obstacles that might be encountered on the battlefield when solving combat missions.

It is worth noting that the very first mentions of a promising aircraft attracted the attention of not only the scientific and technical press. For example, the journalists of the Sports Illustrated edition also became interested in the “Jumping Belt” and asked the authors of the project questions directly related to the themes of their magazine. H. Burdett confirmed that this technique can indeed be used by athletes. Nevertheless, the engineer noted, she has no place in team sports, such as football. According to the developer, the jet gases from the engine of the device can not damage the pilot, but they can cause injuries to people around. 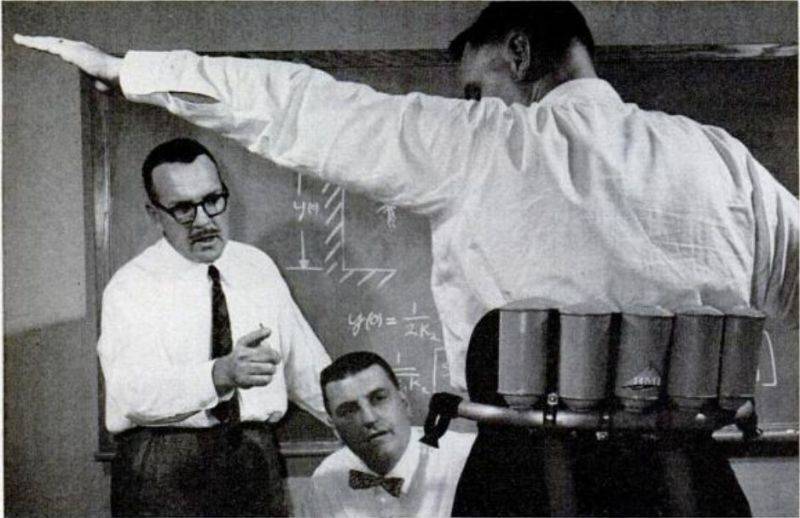 General view of the prototype system Jump Belt. In the background are Alexander Bor and Harry Berdett, Jr. Ray Weech is a “tester”. Photo of Popular Science

Continuing the theme of sports use "Jump Belt", the author of the project suggested that this product can be used in water sports, since it can work both in air and under water. In addition, water skiers will be able to use it, which will allow them to do without a tugboat.

Finally, a personal aircraft had to find application in the space industry. With the help of such equipment, astronauts could move in outer space and control the trajectory of their flight. It is necessary to note the foresight of the specialists of the company Thiokol. Before the first spacewalk, about seven years remained, but engineers had already thought about the problems that astronauts would face in the future.

In the December issue of 1958, Popular Science magazine first published a photo of the Jump Belt system in its current state. Thanks to this edition, everyone could see the latest development, and also received good food for thought and a reason for controversy. Even now, the design of the “Jumping Belt” may be of interest to specialists and technology lovers, becoming the subject of a dispute about the possibility of its practical application.

As can be seen in the only remaining photo of the Jump Belt system, the proposed aircraft had a compact size and a relatively simple design. Its main element was the support system, made in the form of a belt with a rigid metal insert with mounts for the engine. To use the device, the user had to put it on the belt. At the same time, the rigid insert of the base belt appeared on the back and had to serve for the transfer of momentum to the pilot's body.

Behind the rigid element of the belt was mounted engine, consisting of two main elements. It was a "battery" of five small-sized cylinders and a curved tube with two nozzles at the ends. As planned by the creators, before using the apparatus in the cylinders should be pumped under pressure gas. Some sources mention that in earlier versions of the project it was supposed to use compressed nitrogen, but later experiments with other “fuel” options began.

The operating principle of the Jump Belt was simple. At the right moment, the pilot had to activate the engine, opening the corresponding valves. In this case, the compressed gas from the cylinders came out through two nozzles and created jet thrust. It is precisely through this thrust that a person could rise to a certain height or fly some distance through the air. The maximum parameters of altitude and range depended on a number of factors, primarily on the capacity of the cylinders and the pressure of the compressed gas.

One of the versions of the “Jumping Belt”, mentioned in the American press, allowed us to fly up to a height of up to 6-7 meters and fly “hundreds of yards”. A use case was also envisaged, which allowed to run at speeds up to 50 km / h. In this case, the pilot had to lean forward forward before starting the engine, directing the thrust vector backwards and downwards. Probably, in the case of maximum figures of characteristics, it was a question of an apparatus with an increased capacity of cylinders with compressed gas or with an engine that uses a different fuel.

Some sources mention work to change the type of power plant. In particular, there is information about experiments with hydrogen peroxide engines. The course of other projects of similar technology, including later ones, clearly indicated that hydrogen peroxide engines are more efficient than compressed gas systems. However, the details of the development of this version of the Jump Belt system remain unknown.

In an interview for the Sports Illustrated edition, A. Bor and H. Berdett Jr. mentioned that their Jump Belt project was of interest to the military department, but did not disclose details. Also, engineers noted that at the moment their development is too expensive and its cost can be arranged only by the military or other government structures. For private users, such a system is still too expensive. Therefore, those who want to move around the golf course with huge steps, jumps, or climb onto the roof in one jump to straighten a television antenna, or take off above the crowd during rush hour, will have to wait.

A few decades after the completion of all the work, we can say that Burdett and Bor spoke about their development with excessive optimism. In practice, everything turned out to be more complicated and worse than in their plans. Not only civilian users, but also the military did not receive the "Jump Belts". The reasons for this were commonplace and expected. The proposed project did not meet all the requirements that should be placed on such a technique, but also had a number of problems that prevented its full use.

For example, one of the reasons for the insufficient performance of the Jump Belt system was the use of compressed gas as an energy source. Creating sufficient thrust with compressed nitrogen required the use of large cylinders with a large capacity and high strength. Such cylinders would lead to a serious design change, as well as an increase in the size and weight of the device. Thus, a workable device would not be at all like the prototype presented. The only unified element of the two products would be the main belt.

In addition, the ability to climb to a height of 6-7 m or move at speeds up to 50 km / h was associated with some additional problems. It was necessary to take measures related to the safety of the user. Having risen to a height of several meters, the soldier was not supposed to fall to the ground after making fuel. In addition, when flying or accelerated on the ground, some security measures were required.

The version of the Jump Belt aircraft, the photo of which was published in the Popular Science magazine, did not have any means to ensure the safety of the user. In addition, the volume of its compressed gas cylinders was a separate reason for doubts about the performance and the possibility of achieving the stated characteristics.

According to some reports, in the future, the specialists of Thiokol Chemical Corporation refused to use compressed gas and decided to use the engine on hydrogen peroxide. There is information about some research and testing in this direction, but there are no detailed data on this. Apparently, the project was never completed.

The prototype of the Jump Belt with five compressed gas cylinders and two nozzles passed some preliminary tests. Probably, during the first tests, the tester made short-term low-altitude approaches using safety cables. There is no information on carrying out such checks on an improved apparatus equipped with an engine for hydrogen peroxide.

It is known that the Jump Belt project was proposed to the Pentagon, and the military showed some interest in this development. Nevertheless, the matter did not come to state support of the project with the financing of work. The proposed "Jump Belt" had a lot of problems, the elimination of which required time and money. The military decided to abandon the development of the company "Tiokol" and support other projects of other organizations.

In 1958, the military department decided to support the project of the jet pack of Thomas Moore, and also refused the company Thiokol Chemical Corporation. The prototype apparatus, developed by Harry Berdett and Alexander Bohr, was sent to the warehouse, and the documentation was transferred to the archive. Further development of the direction of personal aircraft continued without the participation of the company Thiokol.