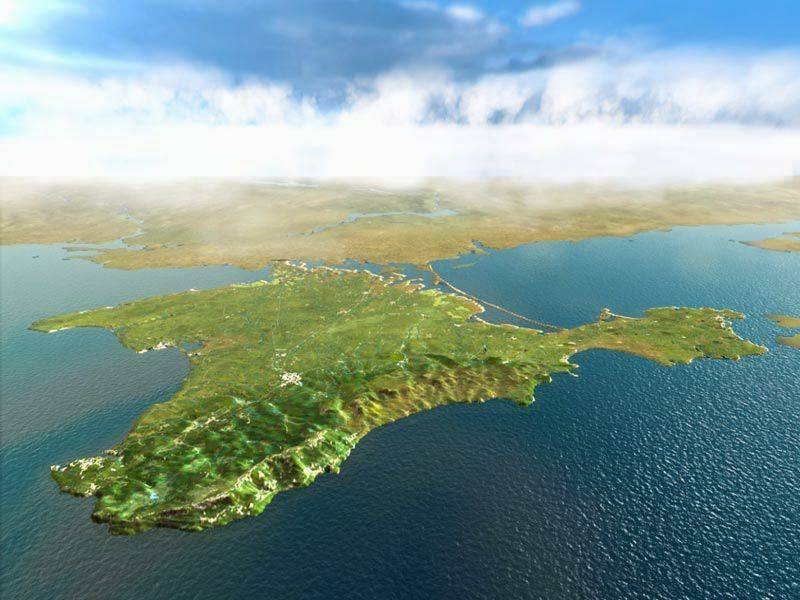 I wanted to discuss one issue that arose after the return of the Crimea home, namely the transport connection of the peninsula with the mainland. As we all already understood, Ukraine led a quite predictable policy of blocking the “rebellious peninsula”. And then the question arose of building a bridge between Russia and the Crimea. In principle, everything is simple and logical, the idea of ​​building a bridge has been in the air for a very long time, irrespective of all the political upheavals of the struggle for control over the peninsula. Of course, the bridge was needed, and even during the Soviet era. Why it was not built then, another question.

But now the Crimea is part of Russia, the Ukrainians are beginning to cut water, electricity and rail links, and the question of the bridge has become very acute. Yes, a mixed railway and road bridge is needed, yes, it will take several years to build it. I met this explanation of why Russian business is not very actively investing in the Crimea: there is no bridge. There will be a bridge, then everything will turn out. I also had to repeatedly meet claims in the Western press that Russia's actions in the south-east of Ukraine are explained by the desire to build a “land bridge” to the Crimea.

You know, it's strange and surprising to hear all this. As you know, the cheapest transport - sea. Of course, in the case of the Crimea, the distances are small, and nevertheless. The Greeks, Byzantines and Genoese, as well as the Turks did not experience any problems with logistics. And their sea communications were much longer. That's what's funny: the Greeks on primitive sailboats, went more than a thousand kilometers (in a straight line!) And did not know the problems. But Russia 21 century with this big problem. And the Crimea at the side and in some strange way it sounds. The Genoese went even further. And everything was great too.

That is, the entirely “land” logic in this case clearly demonstrates its limitations. Even more surprising to me was Brzezinski’s statement that the Russian army in Syria was “isolated”. This is strange and paradoxical. The sea has always been an "open door", not a "end of the world", for marine nations this is understandable. A lot is rightly said about the development of the Russian Navy. A lot is being done. Yes, we need the navy, here Peter was right. But the development is somehow one-sided. Why create dozens of warships if there is no powerful trading fleet? For some reason, our open sea, especially the ocean, is perceived as a kind of hostile element, which can only be done on a cruiser and only for war.

Do not you think that this is very, very strange? If Russia is not able to provide maritime communications with the Crimea, then what kind of global role can our country be talking about? Then you have to sit in your “steppe” and not hang out anywhere. For example, there was no bridge or tunnel between France and England until the end of the 20 century. But no one complained about it, the trade went on in huge volumes. The same applies to Sweden and Denmark, for centuries the absence of a bridge has not prevented establishing contacts and trading, and even fighting. In general, the whole of the Mediterranean and all of Northern Europe have traded beautifully on the sea for centuries, nobody cried in the absence of “bridges”.

Or maybe I'm wrong, and Russia is a land country? No, for centuries the Russians, using the rivers first, then the seas, conducted trade. Therefore, the attempt to “cling to the bridge with“ teeth and nails ”looks very strange to me. Further, Crimea is a particularly important region from a military point of view, for example, we built a bridge. But it turns out, the entire defense of the Crimea will be supplied through a single super. Risky somehow. So no one does. It turns out another Roki tunnel. Destroy it, and the whole grouping of troops in a mousetrap.

And from a business point of view, imagine all logistics through one bridge. Vanguyu: at the entrance to the bridge, there will be megaparks on both sides. And megascandals. I understand that for professional sailors, all this is nothing more than a commonplace, only when it comes to supplying the Crimea, our merchant fleet is not mentioned at all. Bridge. Bridge as a national idea. Apparently, in Syria, too, it is necessary to build a bridge, at least a pontoon one. Otherwise, our group will be cut off. Waves of the gentle Mediterranean. Do not you think that this is nonsense? Hundreds of armies were shipped through it, and even before our era, but the Russians had problems. Some they are strange, these Russians. I inform you in confidence that the supply of a large group in the same Syria is much more profitable by sea than by land. Ask any Briton whose great-great-great-grandfather laid down his bones under Sevastopol.

The British Empire in the 19 century supplied its garrisons all over the planet, thousands and thousands of miles away, without any particular problems. Spanish galleons in the 16 century made regular flights to the Pacific Ocean and the Atlantic. Manila galleons - how much of this word merged for the heart of the seaman! But the Russians, having sent automatic stations to the Moon, Mars and Venus, cannot reach the Crimea. Syria is a terrible thing. Yes, when supplying Syria I had to use BOD, and this is somehow strange. BOD is not sharpened. Where, strictly speaking, the merchant fleet? Auxiliary fleet ships? No them. In vain I remembered them closer to the night.

Warships are used for supply in exceptional cases. Like the Japanese destroyers in supplying the garrison at Guadalcanal. In general, it is expensive and extremely inefficient. And Russia to supply Syria chases the BOD from the Pacific Ocean. It is unprofitable, and it is not clear why. The task of warships is quite different. For centuries, various nations came to the Crimea, as a rule, by sea. And only the Russians are bursting there over the bridge, like elks. After the Ukrainian patriots overlapped the isthmus, even the Ukrainian smugglers realized that the sea was it! He does not stop and do not pump out!

Speaking about the Black Sea Fleet, discuss the number of small rocket ships and submarines that will be put there. And this is great. But to own the sea means to have on it not only warships, but also a powerful merchant fleet, which provides for the transportation of goods and, if necessary, disembarks and supplies the landing force with everything necessary. This was understood by the Phoenicians, Greeks, Romans and Byzantines. The Dutch, the Spaniards and the British understood this no worse. The capacity of any road is limited. In the case of the sea, the limitation is usually the available tonnage and port capacity.

That is how the Greeks mastered the Mediterranean, founding dozens of colonies on its coast. That is how the British mastered the entire planet. And no one tried to build bridges to Ireland. What for? All European colonial empires were sea and kept on sea transport. All major commercial and industrial centers are coastal cities. In the worst case, the cities on the banks of the rivers. Water transport is cheaper. Even in China, it was that way. In the era before the railways, the movement of large cargo went, as a rule, only by water. By sea, river, canal, lake, but not by land.

The very creation of world empires: Portuguese, Spanish, French, British in the era before the railways became possible due to the presence of the sea. No other way. How else can you transport tens of thousands of tons of cargo? On country roads? On the winter road? And there is the Crimea, there is the sea, there are ports. But only land delivery methods are considered. Even in Britain itself, coal from the north of the island to the south was delivered by sea. Even in the era of the development of railways by sea is more profitable.

I understand that these things are fairly obvious, but when I read about the land blockade of Crimea by Ukraine on the isthmus, I feel uneasy. This is some kind of surrealism. The Black Sea does not freeze and all year round is available for navigation, in the Crimea there are a lot of excellent ports, what kind of blockade? Explain to me, idiot, how can I block the Crimea on the isthmus? No, if we talk about medieval nomads unfamiliar with the paddle and tiller, then yes. But for any modern nation cargo turnover with the Crimea is not a problem by sea. Do not be afraid of the waves of the sea, they are good.

In general, for a country that claims to be a leading player in world affairs, dancing with a tambourine around the bridge and the Kerch ferry is somehow undignified. Americans have 800 bases around the world, think for logistics. And no one builds bridges to Japan. That is, the advertised bridge to the Crimea is an important, necessary and useful project. But tie him all the logistics of the peninsula - this is absurd. And yes, Russia needs to develop maritime transport, otherwise it can be inconvenient.

I once imagined that the control over the Crimea would allow, if not to make the Black Sea a “Russian lake”, then at least make significant progress in this direction. What does the bridge have to do with it? You know the famous joke about the fact that for an optimist a glass is half full, and for a pessimist the same glass is half empty? So, for many authors of articles, Crimea is somehow isolated, and it has “terrible logistics”. If we consider the sea as an alien, hostile element (through the eyes of the medieval Nogai), then yes. And from the point of view of the Greek, Crimea has an excellent logistics, it is in the center of the navigable Black Sea, all of whose shores are densely populated. Do not look at the water world through the eyes of a frightened nomad.

Ctrl Enter
Noticed oshЫbku Highlight text and press. Ctrl + Enter
We are
We disassemble the interplanetary transport system (ITS) for parts from Ilona MaskWhat you didn't want to know about England
Military Reviewin Yandex News
Military Reviewin Google News
113 comments
Information
Dear reader, to leave comments on the publication, you must sign in.