October 26 2015
58
Yesterday US Secretary of State John Kerry called Sergey Lavrov. Colleagues talked about the prospects for a political settlement in Syria. On the same day, in Damascus, Syrian President Bashar Assad said at a meeting with Russian parliamentarians that he intends to participate in the presidential elections if the Syrian people support him. The democratic Western press is indignant: Assad, this "dictator", has become Putin's "pet". The latter plans to insidiously "capture" Syria. However, the Western war machine does not dare to oppose Putin in the Middle East. But something needs to be done, and the Washington Post newspaper called for war with Putin’s propaganda. 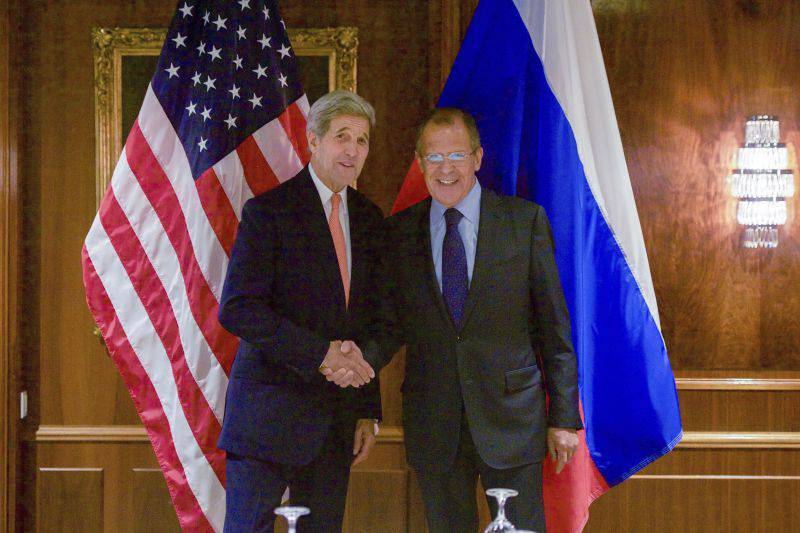 US Secretary of State John Kerry called a colleague Sergey Lavrov on October 25. Parties discussed, notes "Lenta.ru", the prospects for a political settlement in Syria "with the participation of the authorities and the patriotic opposition, with the support of this process from the international community."

On the same day, a statement by B. Assad, the president of Syria, appeared in the press.

During the meeting with the Russian parliamentarians in Damascus, Comrade Asad stated that he intended to participate in the presidential elections if he was supported by the Syrian people. This was announced by State Duma deputy from the Communist Party of the Russian Federation Alexander Yushchenko. "Assad said that if the Syrian people deems it necessary, he is not opposed to taking part in the presidential elections," a member of the Duma delegation said. "Lenta.ru".

Yushchenko also stressed that Russia is fully confident in the popular support of Assad.

Meanwhile, the leading press of the United States is indignant about the coming "capture" of Syria by some states, including Russia. This is not a joke and not fiction. Not a journalistic fake.

Under the heading "Opinion" of a major American newspaper Washington Post An article by Charles Krauthammer appeared. The author is outraged to the depths of his soul by the recent visit of Assad to the Kremlin.

Bashar al-Assad, this “dictator and destroyer of Syria,” the journalist writes, has now become Vladimir Putin’s newest “pet”. For four years the tyrant was hiding in Damascus, and now he was "summoned" to Russia, so that he could "bow down his knee" before Putin, thereby showing the planet that today the issues of the Middle East are not solved in Washington, but in Moscow. In addition, with his visit, Assad made it clear that he "officially blesses the leadership of Russia with four states that are currently exciting Syria."

President Obama claims that the Russian operation in Syria is doomed to failure, that Syria, like a quagmire, is sucking Putin. But, a political observer points out, Russia is not trying to win back the country for Assad! What is Assad, who managed to consolidate only a part of the Syrian state - approximately 20 percent of the territory, i.e. areas inhabited by Alawite?

Obviously, Syria will be divided. Part of it will remain the "Islamic state."

As for the general strategy of Putin, the columnist and here everything is clear: the owner of the Kremlin does not plan to "reconstruct the old Soviet empire" at all. This is too big a task. But Putin is restoring Russia's ability to act outside the country. And the fortification in the “Alawite State” ensures the existence of the sea and air bases of Russia in the eastern part of the Mediterranean Sea. The recent Russian launch of modern cruise missiles from ships in the Caspian to 900 miles has well complemented this picture. In short, Obama reasons, and Putin is acting!

The other day in the popular TV show “60 Minutes” Obama was asked: “Doesn't it bother you that the United States are inferior to the leadership of Russia?” .) - this is not a leadership.

And Obama boasted that he (Obama) is leading in leading the world, caring for the preservation of climate.

Apparently, Krauthammere's columnist was uncomfortable with these words of Obama, because at the end of the article he offered to all those who live in a zone of any conflict and hopes for US help to collect manatki and slip away to Germany.

Other author Washington Post, David Kramer (David J. Kramer), offers to attack if not the troops of Putin in Syria, then the machine of Putin's propaganda.

Kramer is a real expert. His position is called “senior director for human rights and democracy at the McCain Institute for International Leadership).

In his opinion, Putin’s rule was an “existential threat” before the Syrian campaign launched by Russia. It was about the "existential threat" that US military officials were saying when Putin "invaded Ukraine."

As Mr. Kramer points out, Putin now "oversees one of the most corrupt and kleptocratic regimes on the planet" (Putin, who oversees one of the most corrupt, kleptocratic regimes in the world ...). And this same Putin "takes an extremely active position in solving international issues - both in Ukraine and in Syria." But Western leaders, including President B.H. Obama, are in a passive position.

The question that gives the expert no peace: doesn't the West have to go on the offensive? No, it's not about war. However, Putin’s plans should be “broken” in one way or another. To this end, the expert suggests “blocking” the activities of Putin’s propaganda.

Kramer does not just reason, he shows how you can implement a battle scenario.

The West "freezes the assets of the RT television channel, funded by the Putin government." The reason will not be propaganda itself, but the court ruling against the Russian government in the Yukos case. After all, the European Court of Human Rights came to the conclusion that the Russian government owed Yukos shareholders 52 billion dollars. Shareholders won cases in the European Court and in The Hague (International Court of Justice).

And now, relying on the New York Convention (New York Convention, link), which was also signed by Moscow, shareholders are entitled to ask other states for help. Assistance will concern the implementation of regulations. The expert offers the assets of Russia "to seize", because they allow judicial decisions (rulings by seizing Russian state assets).

And further. As for the ECHR (European Court of Human Rights), Russia has repeatedly lost in this court.

Of course, everyone knows: the Russian authorities appealed the decision of the Hague court. But does Russia have a chance of changing the ruling? They are insignificant.

Finally, Moscow is clearly not going to execute the decisions: more than a year has passed since their adoption. The expert concludes: the Kremlin "shifted responsibility" for execution "to other states."

And someone has already shown goodwill. For example, in July 2015, the UK authorities froze the accounts of the RT television channel. France and Belgium are getting ready to have their say.

What is Washington? The author of the material strongly recommends that the United States and other Western states follow the example of the three countries mentioned above.

Why precisely “RT”? This channel, the expert believes, is the most important element of the “Putin propaganda machine.” The task of such propaganda is to “discredit the West”. The audience of the channel is seven hundred million people. "RT" has its own studio in Washington. And here are the sums: the Russian government spends about 0,5 billion dollars to finance the TV channel and other sources of Kremlin propaganda.

And in the Kremlin they understand this, they are already “nervous” there, and Western law firms are hiring there, who could try to challenge the likely “seizure of assets”.

The expert suggests starting to influence Russia with “RT” precisely because in this way the West is seriously harming the “Putin propaganda machine”.

“It’s time for a democratic community of nations to go on the offensive!” Calls David Kramer.

Panic in the American media suggests that no active response to the Kremlin from Mr. Obama is expected. As we predicted earlier on the VO pages, the brewer from the White House intends to sit out the remaining months on the throne calmly, without unnecessary excesses. And the fact that Obama does not intend to get into the Syrian conflict, it became clear two years ago, when the owner of the Oval Office renounced its own "red lines" in Syria. With the Crimea, too, everything is clear: from the speeches of the "hegemon" the mention of the peninsula has long disappeared.

Ctrl Enter
Noticed a mistake Highlight text and press. Ctrl + Enter
We are
Bashar al-Assad: Captain does not run from the shipSyria: Americans scare themselves, and Asma Asad buys chairs
58 comments
Information
Dear reader, to leave comments on the publication, you must to register.