Day of the national flag of the DPR 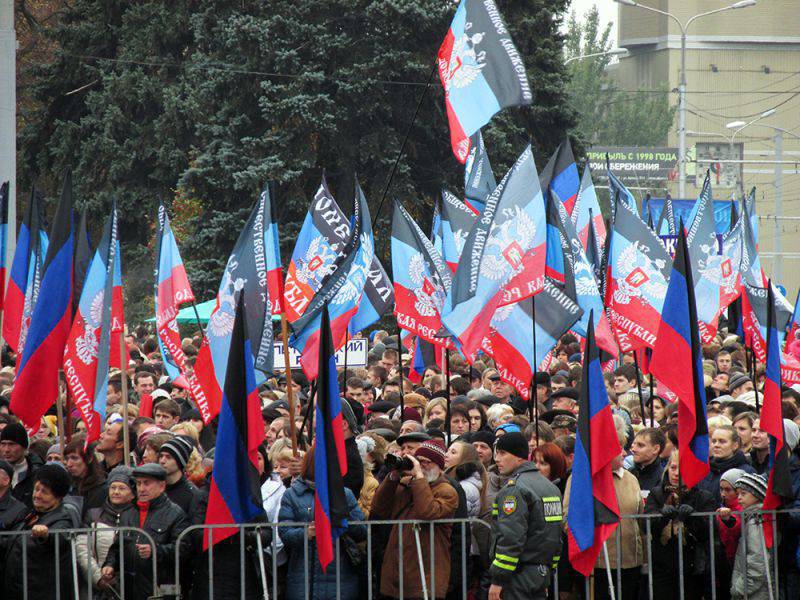 While pseudo-elections were held in Ukraine, in the conditions of the wildest suppression of the opposition and numerous violations - the young Donetsk People's Republic celebrated Flag Day.

In the 2014 year, when the intensity of the shelling was many times greater, on October 19, residents of the DPR came to Lenin Square and held a grandiose action there - they made a huge flag with their own hands. Now this cloth appears not only at political meetings, but also at sports competitions and other events.

October 19 The 2015 of the year was organized by the Free Donbass social movement, but the main festivities were scheduled for Sunday, October 25.

So, October 19 in Donetsk opened its doors to a new Youth Center. The former building was destroyed by shelling of Ukrainian punishers, and now the city authorities have allocated the former Komsomolets cinema to young people. And the very first event, which took place in the new building, was timed to the anniversary of the day when the residents of the Republic made the flag of their young state with their own hands.

In the lobby, guests met several exhibitions. There were children's drawings and photographs of the peaceful and military Donbass. But the special impression was made by the products made by sculptor Viktor Mikhalev. Earlier, I wrote about his exhibition "Steel Donbass". The master makes roses, candlesticks and various compositions from fragments of shells. 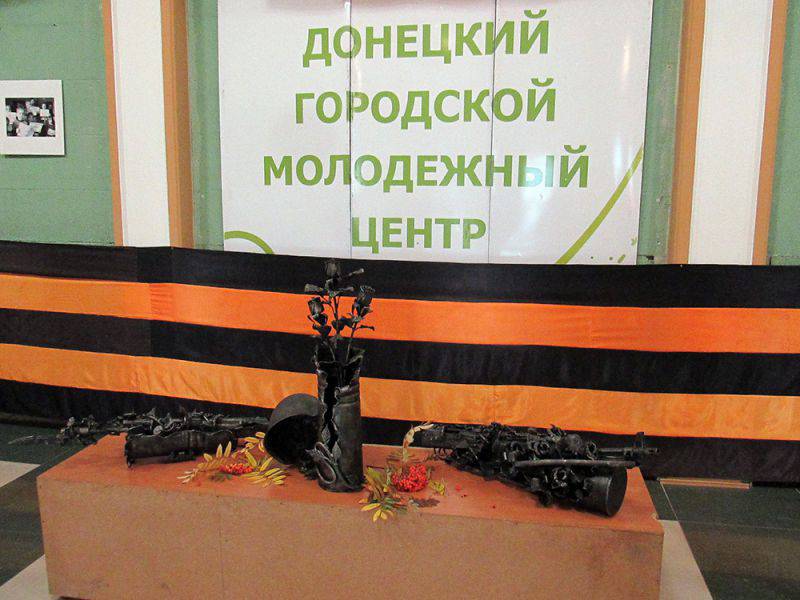 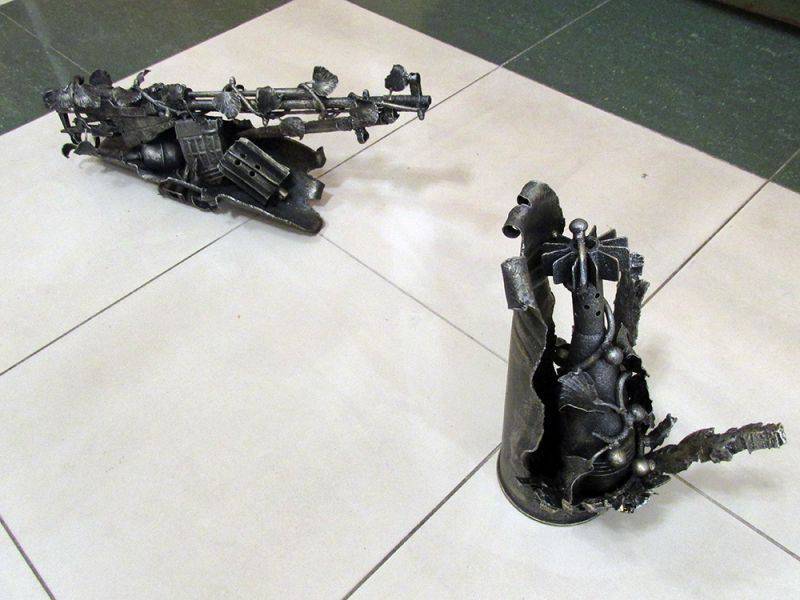 The celebration began with the fact that young people brought a large, 30 size on 14 meters, black, blue and red banner into the hall. It was the very banner that the residents of the DPR did a year ago. The head of the Free Donbass movement, deputy Yury Sivokonenko, stated that the strength of the Slavic people is, first and foremost, in unity. He appealed to schoolchildren and students, saying: "The war will end sooner or later, and you raise the state." 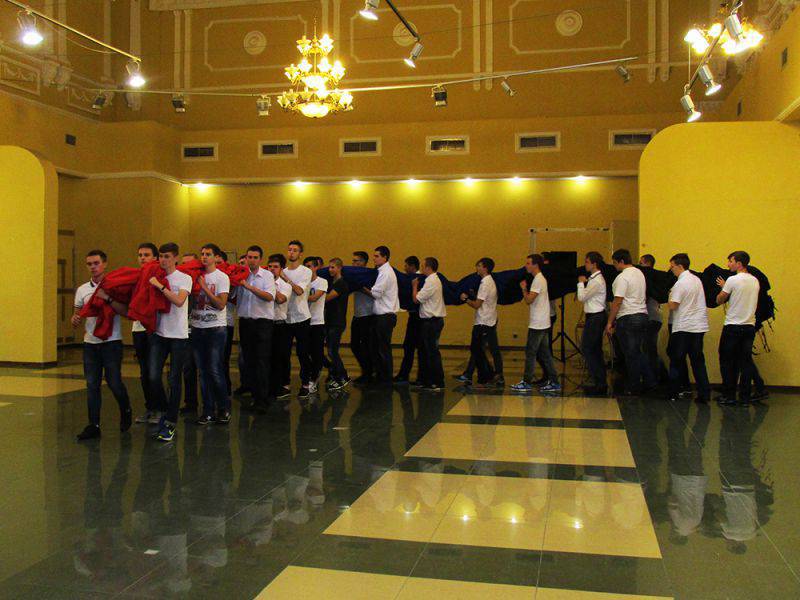 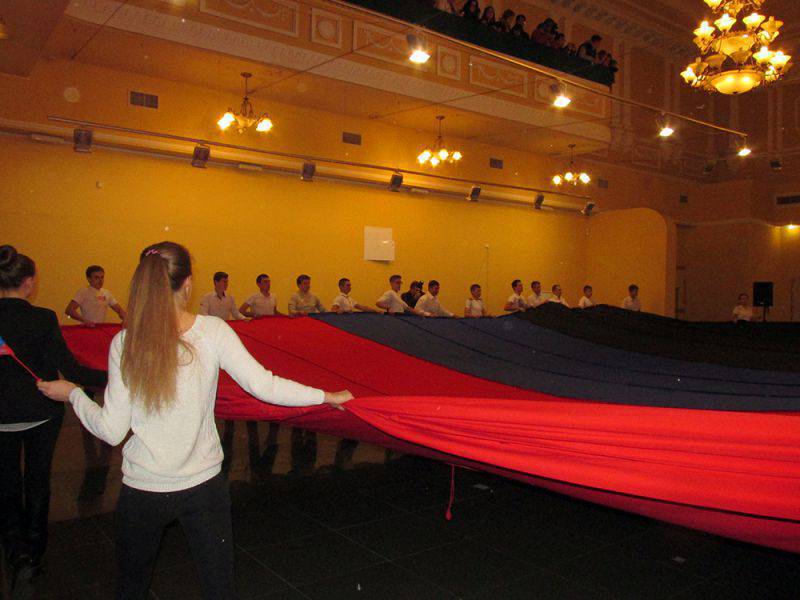 Then a concert was held, in which young people took part - students of Donetsk universities, as well as those who directly picked up weaponto protect your native land. 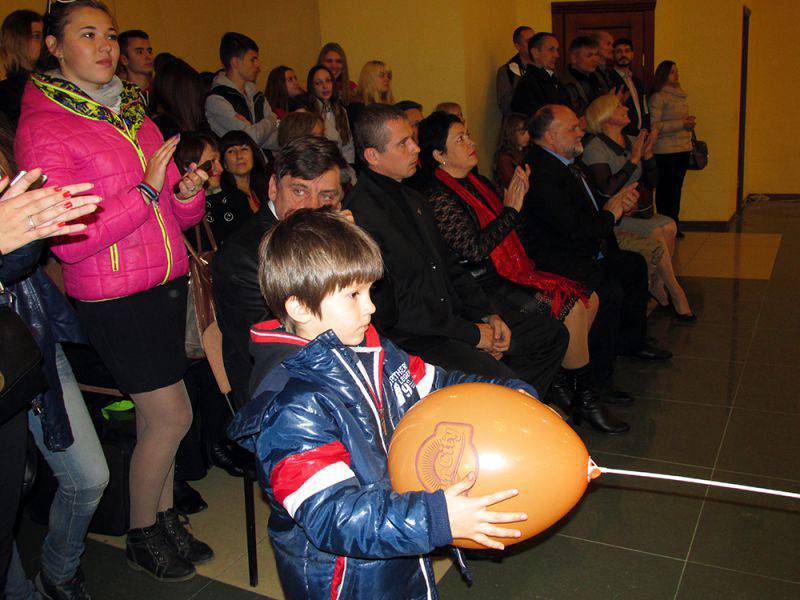 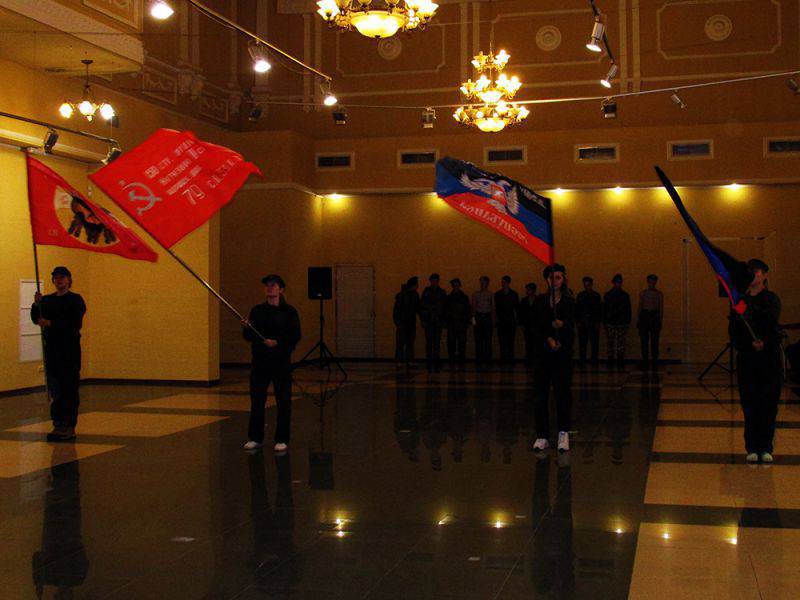 And on Sunday, October 25, the whole Lenin Square was filled with people. Despite the overcast and cold weather, about 15 thousands of people came to the main square of Donetsk. A huge crowd was full of flags.

On the street Artem - the main thoroughfare of the city - there were many cars of black, blue and red colors. That is - the colors of the flag of the NPT. Later, when they all went, from above it looked like a big banner. Moreover, the celebration of the Flag Day coincided with the Motorist Day. 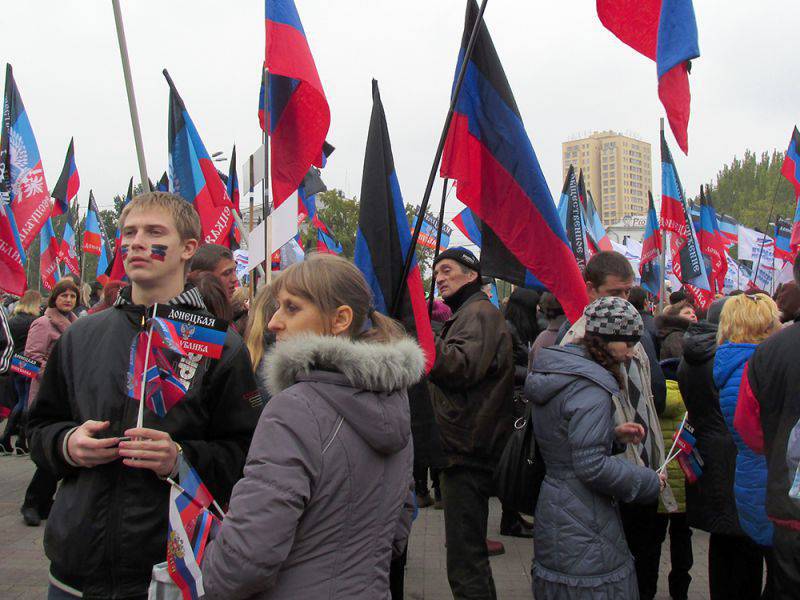 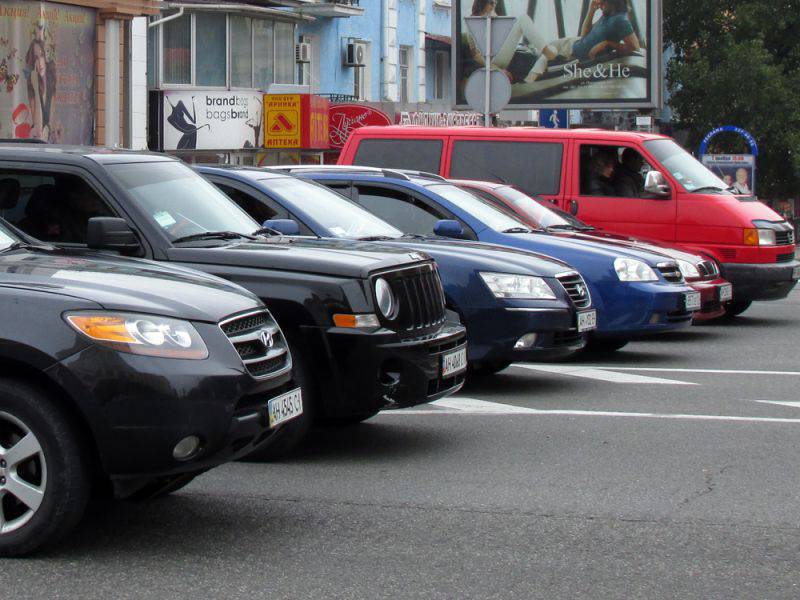 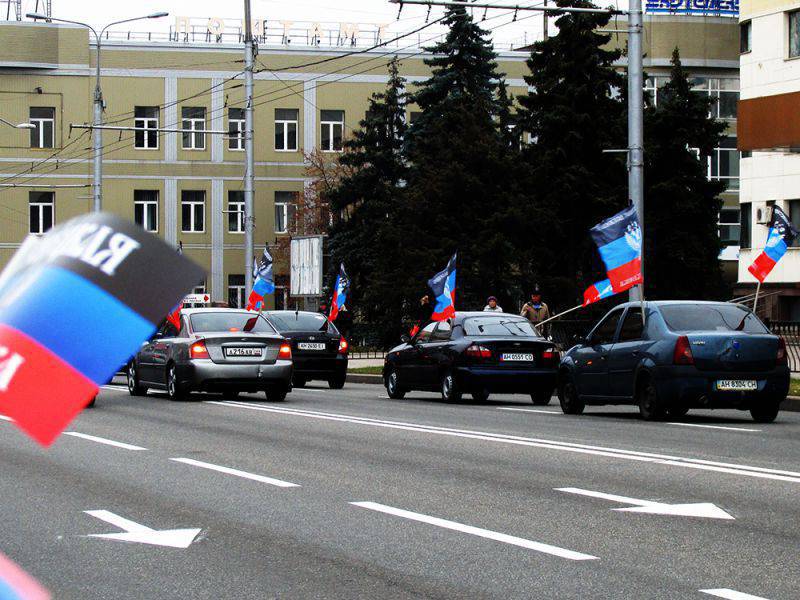 On the approach to Lenin Square - another action: "Sport for All." Here people with disabilities played basketball, and chess players were located nearby. 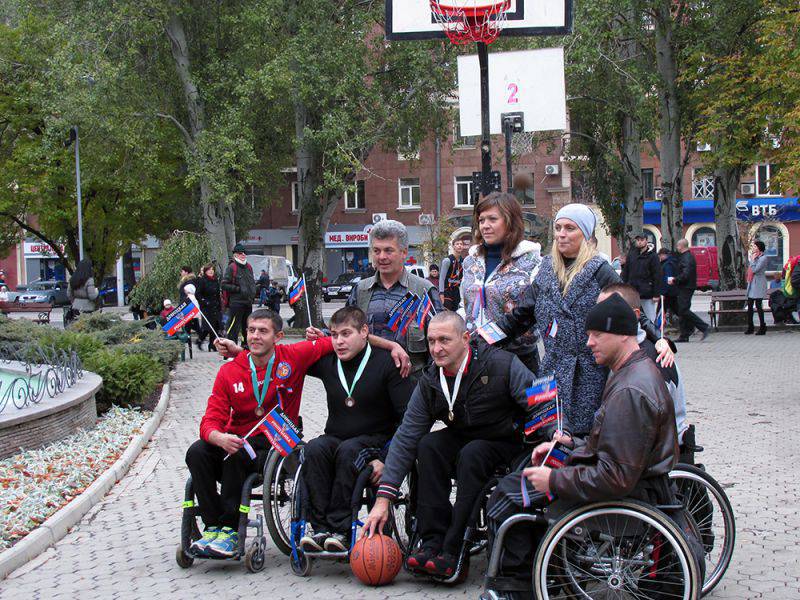 To launch into the air were prepared balloons - all the same state colors. 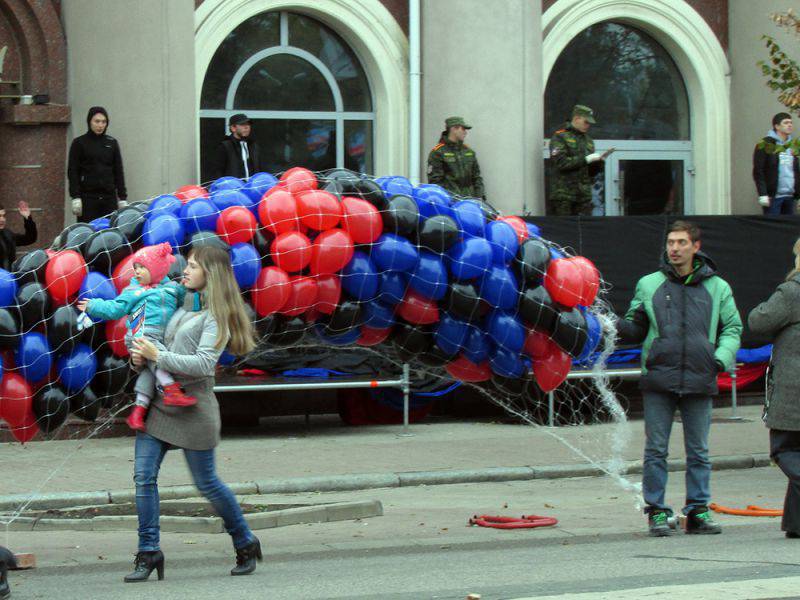 The head of the Donetsk People's Republic, Alexander Zakharchenko, addressed the people: “Dear countrymen! When we stood up to defend our native land, we defended the honor and dignity of our people and the colors of our flag. Our flag is a shrine for every citizen of the country. This is the main symbol of independence and sovereignty, a symbol of the unity of the people. Black color symbolizes Donbass coal, blue is the color of people's spiritual unity, and scarlet color is diligence and valor, it is the shed blood of heroes for our freedom ... With this tricolor, our valiant army went into battle with the enemy, freeing the cities and villages. ” 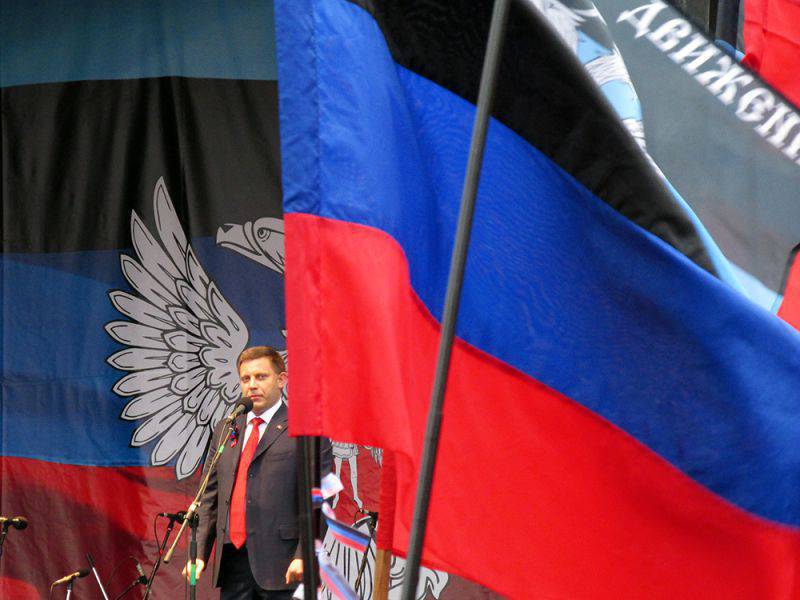 Then the leader of the young state gave the order: “Raise the flag!” And that huge flag was raised on a beautiful building located near the square. 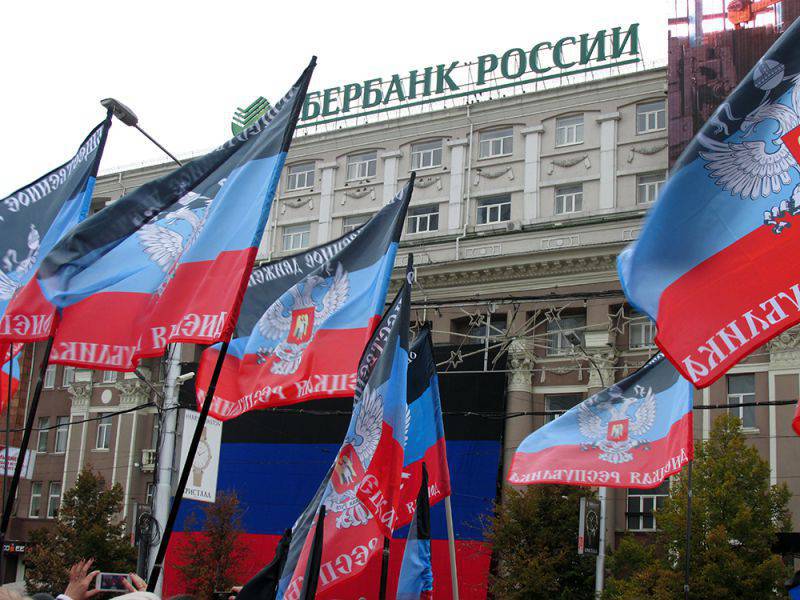 And balloons shot up into the air. 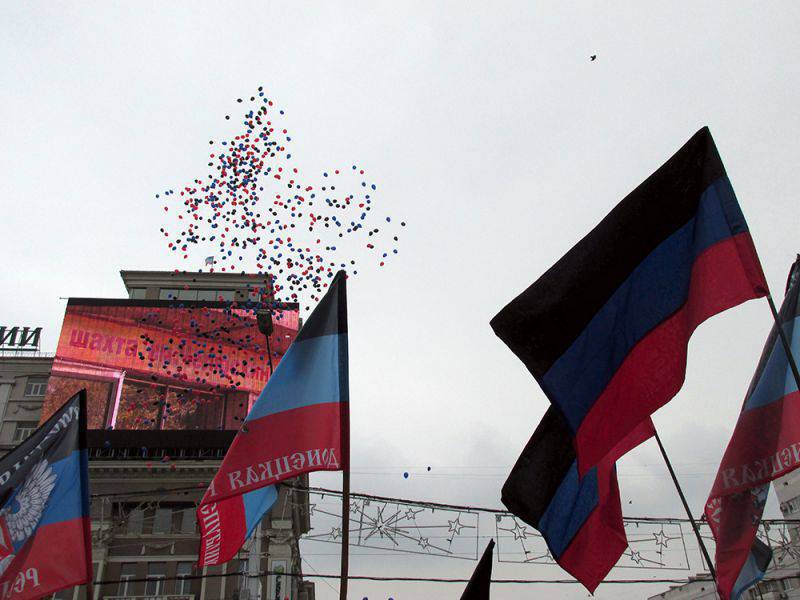 After a small formal part of the rally took place, and then the concert began. 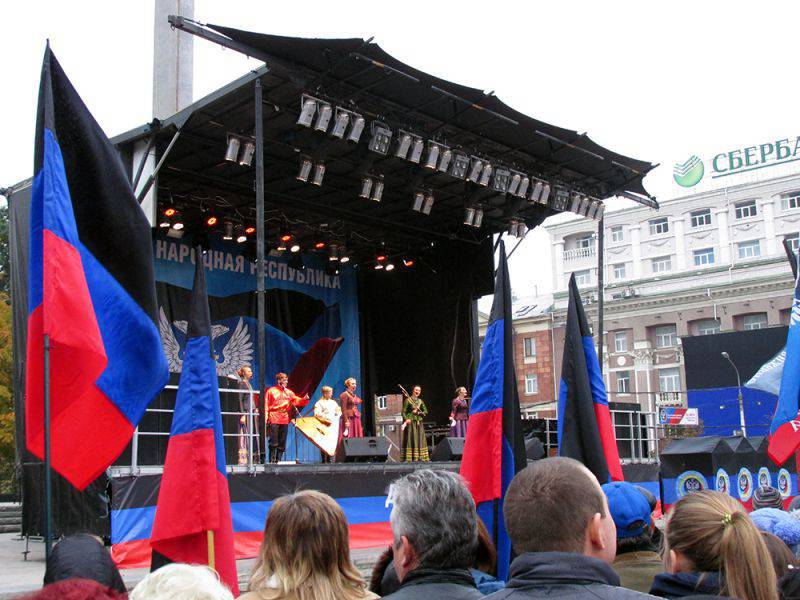 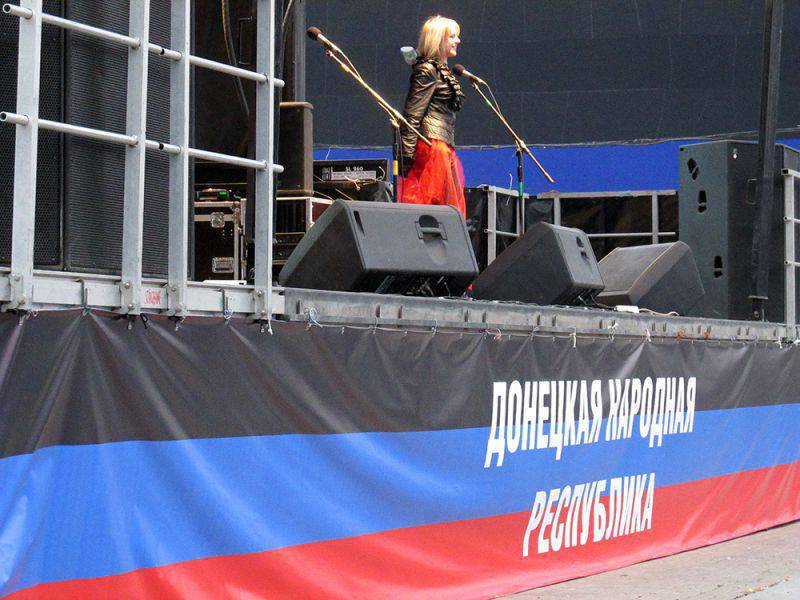 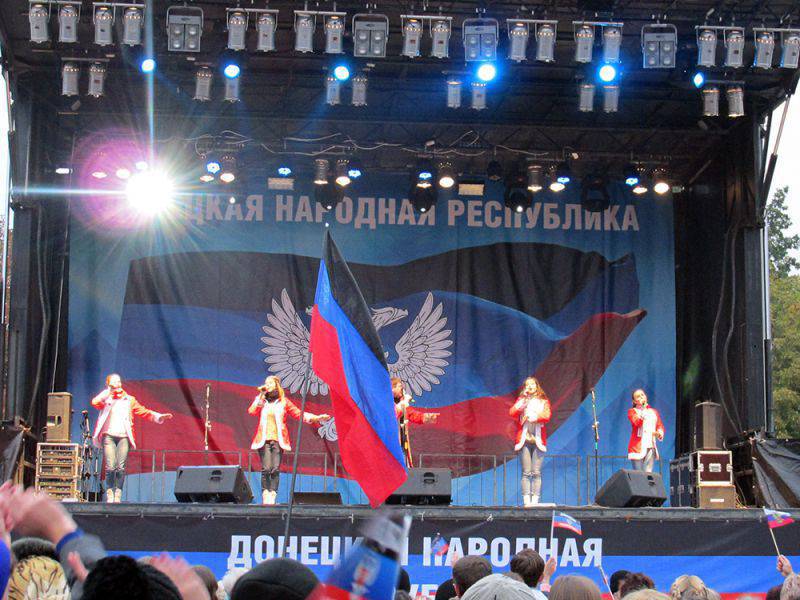 Two stands were installed on the square, where anyone could write a wish to his native city. Of course, residents want peace, victory and love ... 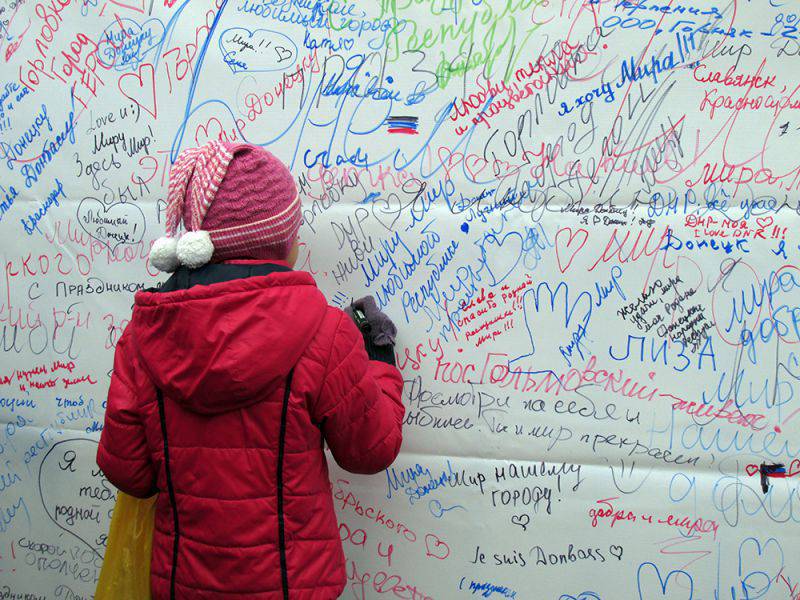 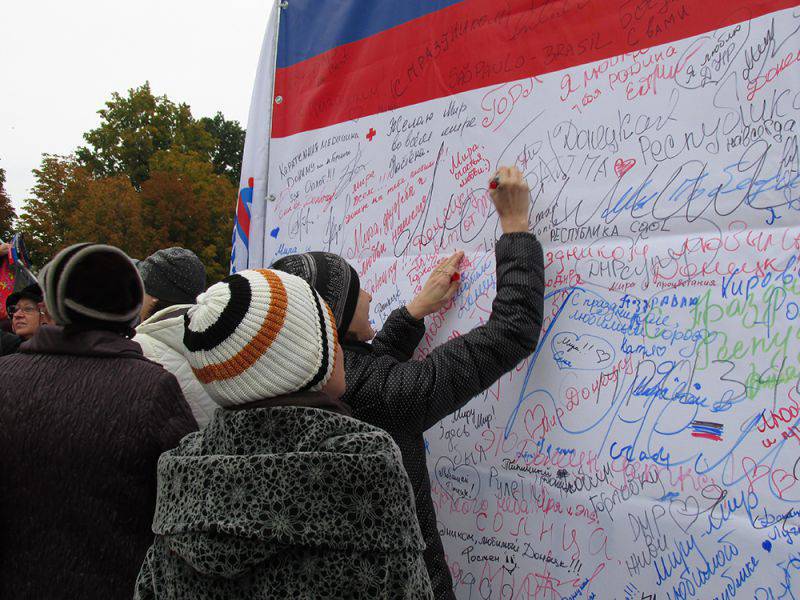 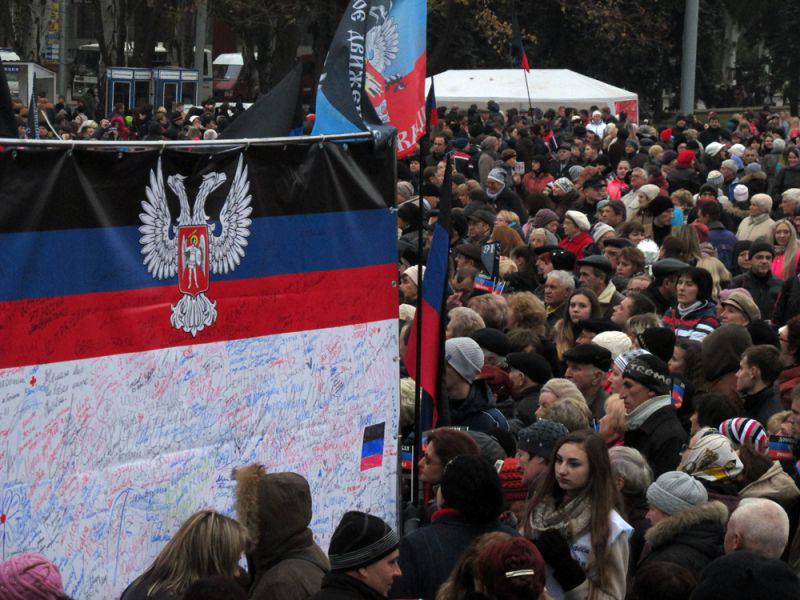 The holiday was a success. People danced, singing along with the artists, having fun, playing round dances. Distracted from the war, tears, suffering ... 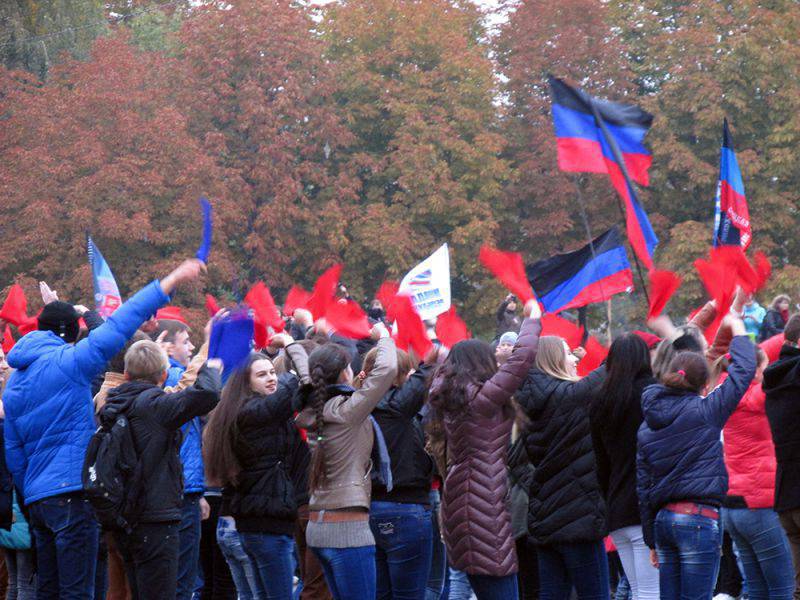 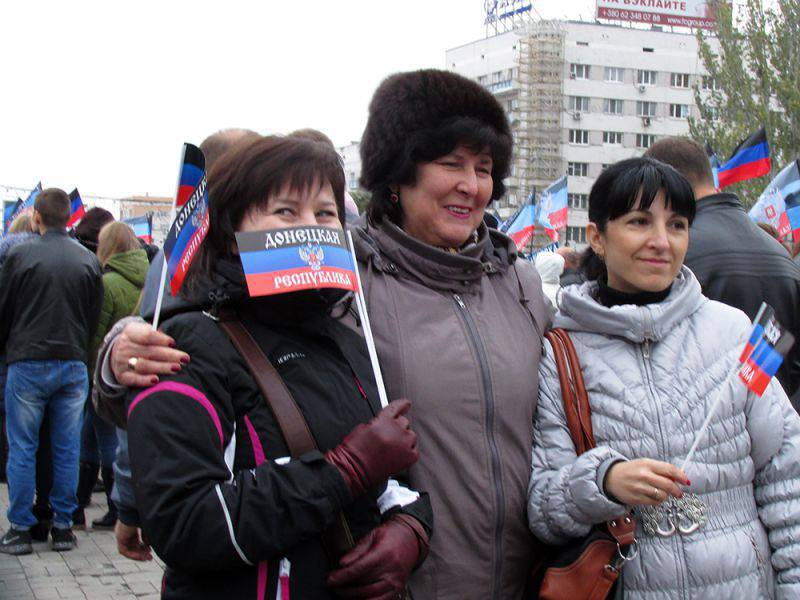 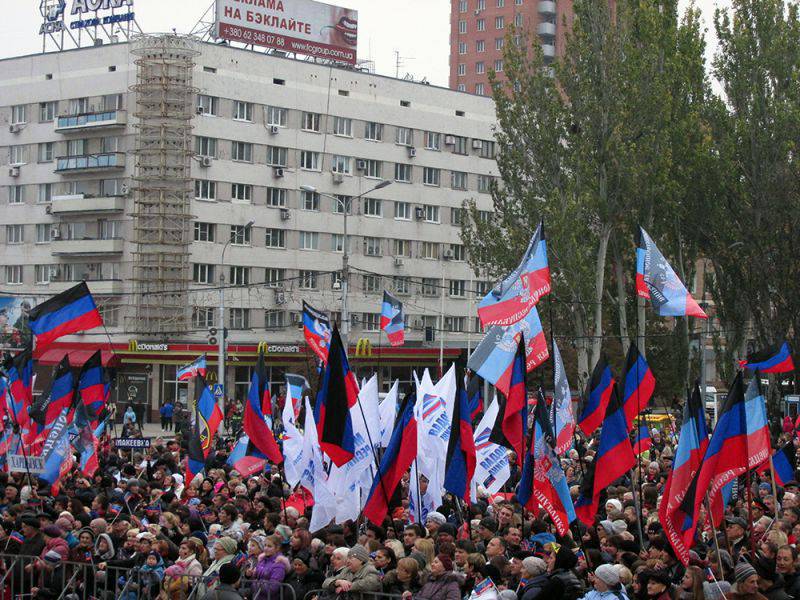 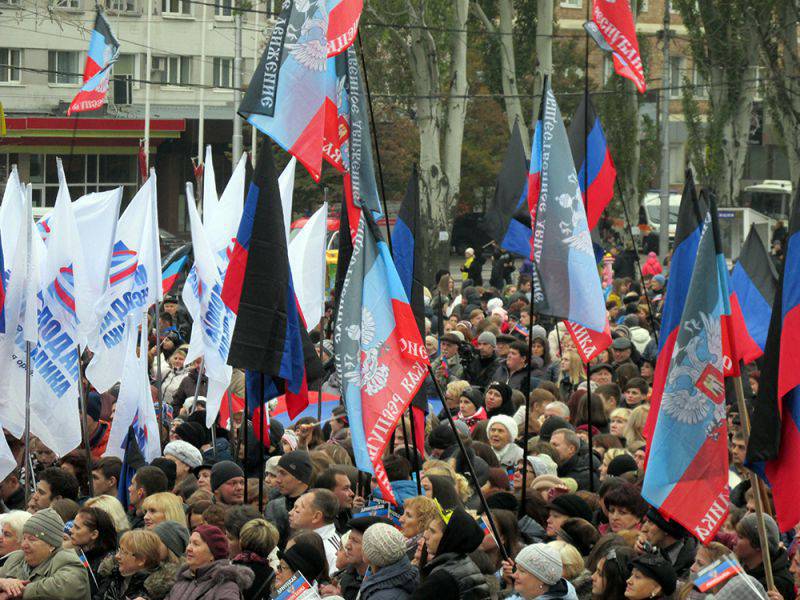 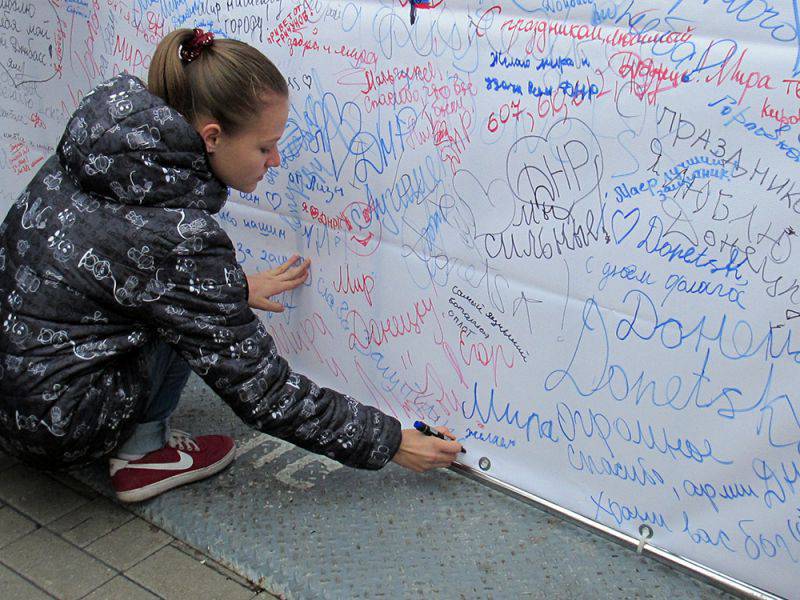 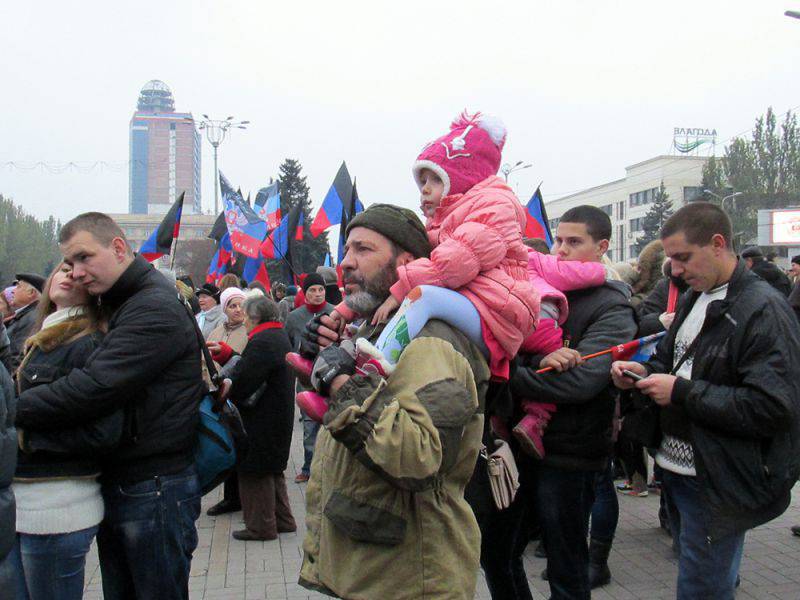 A well-known militiaman and journalist, a US volunteer Zach Novak unfolded a flag with a portrait of Che Guevara, as well as banners of the fraternal states of Russia and Serbia. With this man there were many who wanted to be photographed for memory. 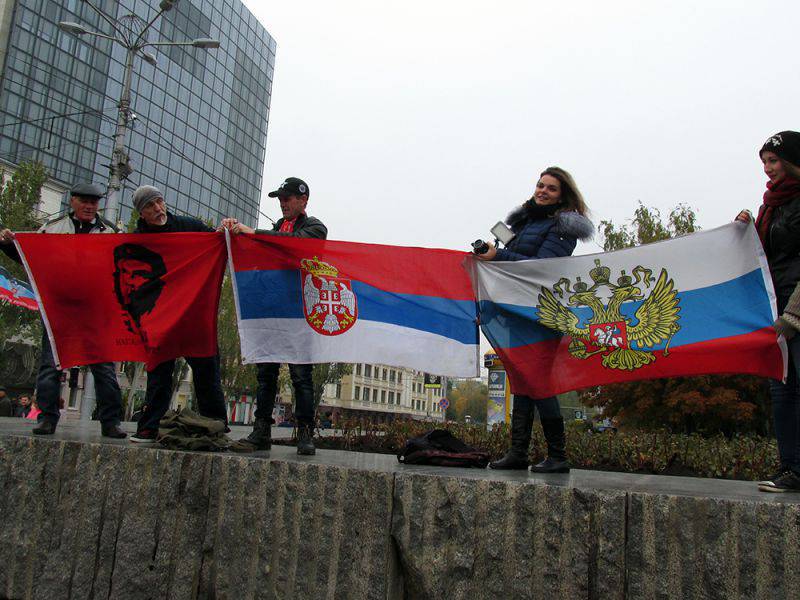 Folk festivities continued until the evening, even when it began to drizzle cold rain. 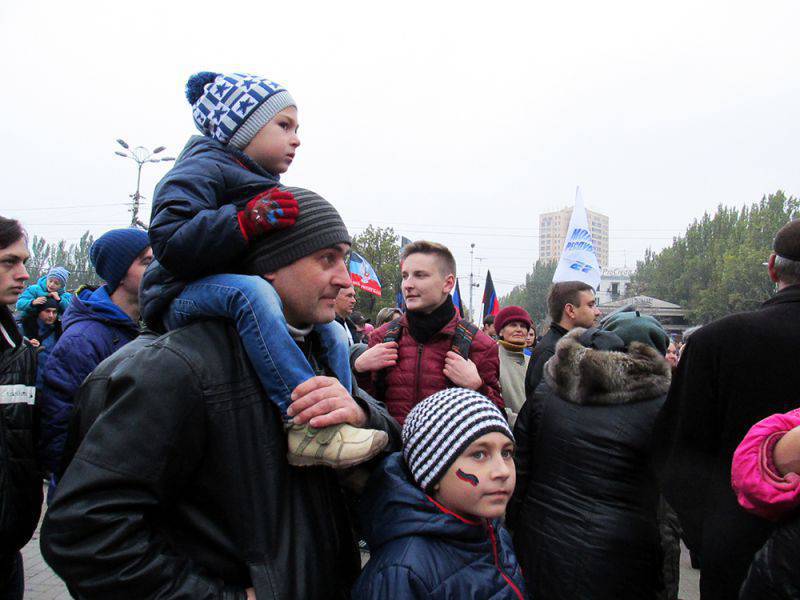 We are in Yandex Zen
In Donetsk, a monument to Uncle Vasya was installed, and the ukrokrateli “congratulated” the Donbass on the Day of Metallurg
Armored vehicles of Yugoslavia. Part of 3. Yugoslav People's Army (1945-1980's)
19 comments
Information
Dear reader, to leave comments on the publication, you must to register.