US may refuse to build the third Zamvolta 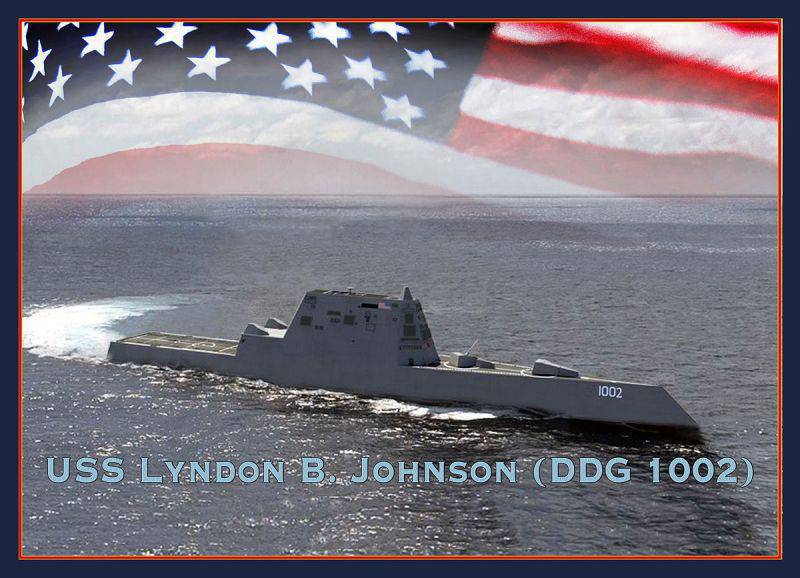 The Pentagon announced its intention to stop building the third destroyer of the Zamvolt series.

According to a common statement, the US defense department initiated a revision at the shipyard “General Dynamics”, the results of which will decide on the further fate of the destroyer USS Lindon B. Johnson. The degree of readiness of the destroyer exceeds 40%, but at the Pentagon they are sure that it is more profitable to cut the ship now than to lower it into water and put it into operation. A radical decision will help to save over the next few years 1,5 — 2 billion dollars, which can be directed to other immediate needs.

Opponents of this decision - employees of the shipyard and senators from the state of Maine - argue the opposite: the rejection of construction will result in the loss of a first-class warship in exchange for dubious savings. Further, there are obvious things about the loss of jobs, the payment of penalties and the negative consequences for local business.

The program “Zamvolt” came to its natural finale. The ambitious plans to build the 32 stealth destroyers of the new generation were adjusted to seven, and then to just three experimental ships.

But long before the financial ground gnashed at the bottom of the Zamvoltov, the Pentagon started talking about the dubious combat effectiveness of these floating pyramids. The sufferers turned out to be unarmed, in addition, there are concerns about its stability. The unusual Δ-shaped hull with a massive high superstructure inspires mistrust to those who will serve on this destroyer. As the calculations showed, there are unfavorable conditions under which the super-ship can ... easily tip over (high wave from the aft angles). The creators of “Zamvolta” deny all the accusations and, paraphrasing the joke about the blind-sighted rhino, answer that with such dimensions it is not his problem. The probability of meeting with a dangerous wave is less than death in battle.

By the way, about the sea battles. Admirals express bewilderment about the tactics of using stealth destroyers.

Their number is too small to form a uniform impact connection. When operating as part of the squadron, the strike power of the Zamvolta dissolves against the background of numerous “ordinary destroyers”. At the same time, no one would risk sending the “golden ship” to a single raid to the shores of the enemy. With any absence of constructive protection on board!

"Zamvolt" is designed to remain unobtrusive to the enemy. But there are situations when a fight is inevitable.

After all, it is not known whether the 140 man would have enough strength to extinguish fires, quickly fill up holes and fight for the survivability of a huge destroyer.

In general, typical “white elephants” fleet. Overly expensive technical masterpieces with outstanding characteristics, but in the absence of any possibility / need to put them into practice. 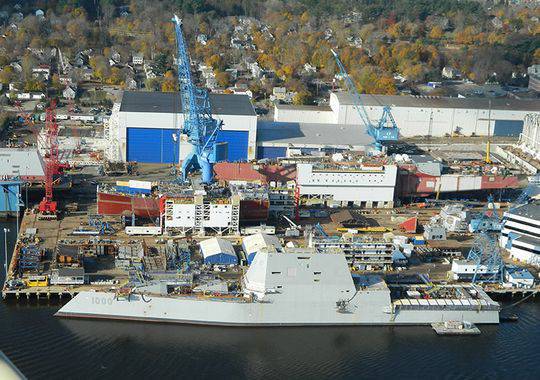 - 80 launch cells for the storage and launch of Tomahawk CDs, Asrok-VL anti-submarine missiles, ESSM short-range anti-aircraft missiles (4 in one cell);

- two automatic 155 mm guns AGS with 920 ammunition shells. 12 shots / min - flurry of fire! When approaching the coast by 100 km, the fire density of the Zamvolt exceeds the wing of the aircraft carrier Nimitz;

- two automatic 30-mm guns for self-defense in the near zone;

- an air group of a multi-purpose helicopter and three Scout Fire drones, the Zamvolta landing platform is designed to accept heavy helicopters - up to Chinook.

Additional features: the most powerful in stories Rolls-Royce MT-30 ship gas turbines. Full electric movement (reduced acoustic visibility, the ability to redirect all the generated energy to power railguns). Dock camera for high-speed boats. Propellers in ring nozzles-fenestrons, a system for supplying bubbles to the underwater part of the hull, coupled with specific contours. This makes the wake of the “Zamvolt” difficult to distinguish from space. The widespread introduction of technology "stealth": the heads of missile guidance is more difficult to detect such a goal against the background of the sea. The task is especially complicated in a storm - due to the specific bow of the “Zamvolt” it does not rise on the wave, but cuts it like a giant knife. Due to which constantly hidden among the water shaft.

Finally, the global automation of the destroyer, achieved primarily by increasing the turnaround time of all units and systems. Now the destroyer will be serviced exclusively in the base, at the end of the campaign.

He alone is stronger than most of the fleets of the world. The Zamvol lacks only satanic pentagrams on board. Then, the floating pyramid will be able to move through the worlds and turn into an absolute weapon.

“Lyndon Johnson” is an independent subtype in the Zamvoltov family. This ship is created to demonstrate the most futuristic technology that goes beyond conventional guns and "stealth". Each "zamvolt" is designed for installing weapons on new physical. principles, but the real carrier will only be the last, the third destroyer of the series. “Lyndon Johnson” can be the first ship in the world armed with an electromagnetic railgun.

Due to financial disasters, the third Zamvolt has a number of unplanned constructive differences from the first two destroyers.

In connection with the transfer to the category of pure strike ships, all Zamvolts under construction since 2011 have been forcibly deprived of the missile defense function. The rejection of the SPY-4 radar in the project of a distant review greatly reduced the so-called. “Top weight” and created an unplanned reserve of stability. 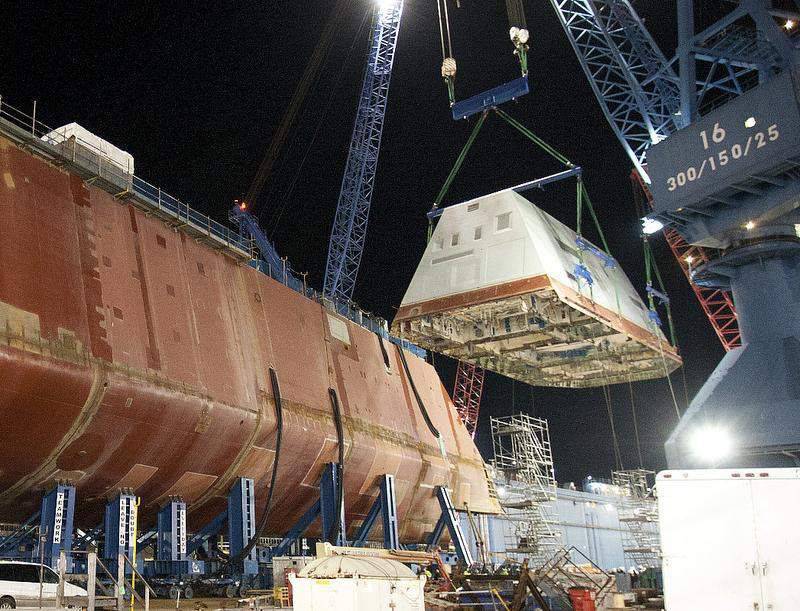 In this situation, the add-in “L. Johnson ”was decided to make of cheap structural steel - in contrast to the“ Zamvolta ”and“ Michael Monsura ”, whose“ tower ”in order to save weight built using composites. How will this decision affect the level of conspicuity of the stealth destroyer? There are no developer comments on this.

Despite the complete collapse of the Zamvolt program, massive construction of obsolete Orly Burk destroyers continues across the ocean. Time-tested warships with 90 rocket mines and the Aegis air defense system.

In March, 2015 of the year, the 63 th destroyer “John Finn” was launched, referring to the IIA “Restart” subseries. Among the main features are the upgraded Aegis modification for missile defense missions, a promising mine detection system in the water column and a system of protection against bacteriological weapons. 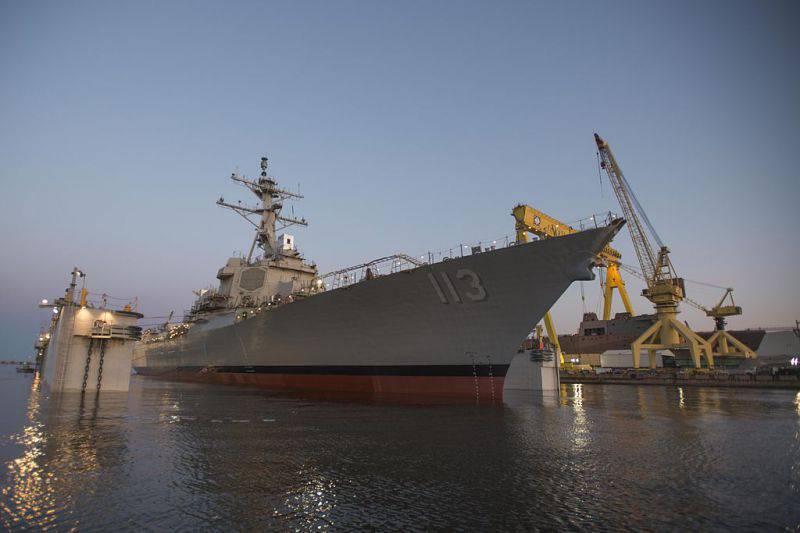