Country 404. Elections, elections ... everything is as always

October 26 2015
42
So we live to see this day. More precisely, lived Ukraine. And yesterday, in accordance with the new law of the Parliament, throughout the whole (almost all of) Ukraine, elections to local authorities began. 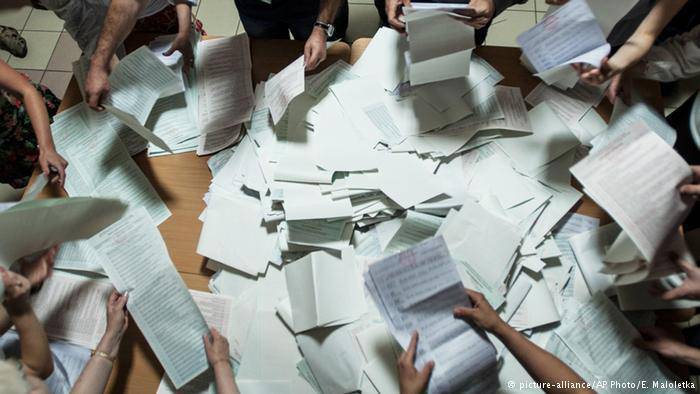 Elections in Ukraine - the thing is that they always look for them. But these choices are special. Their main task is a kind of transformation of the Ukrainian authorities from frankly fascist to a relatively democratic junta with a human face.

Should sensible people expect something significant and useful from these choices? I think no. Today, no election can fundamentally change anything simply because there is no real alternative. All dissenters in Ukraine have been cleaned out of the field, and there is not a single party that would offer at least something other than “European integration”, total subordination to the West, hostility towards the Russians and selling the remnants of the Motherland to everyone (except Russia, of course).

Everything goes according to plan. The people, though reluctantly, went to the sites. Who was needed, he was highlighted in the media during the process of sticking a ballot paper, who did not need it - they were chained into handcuffs. Somewhere the representatives of the parties fought, somewhere a frank scam surfaced. In general, everything is like in humans.

As a result of whom it is necessary, that will be elected. Just because fair elections in Ukraine are from the category of jokes. And not funny. We all remember very well packs of filled ballots in the ballot boxes on 9 on the morning of 25 last May, when Poroshenko “won in one round”.

It is clear that these same local elections solve absolutely nothing in Ukraine, no matter how much it is presented by the foreign media. Absolutely nothing. Too strong and significant shift towards the executive branch. Well, the mayors will be chosen, as if there is no doubt.

The only question is from whom?

In general, the party structures built from Kiev to the last village had only three forces: the “Party of Regions”, the “Yulia Tymoshenko Bloc” and the Communist Party of Ukraine. Where is the CPU? Well, yes, we all know. But the structure of the regionals have not gone away. Very few of the former regionals left the country - the majority, having agreed with the junta, gradually moved to the Poroshenko or Tymoshenko bloc, or to the pseudo-opposition bloc. The party elite is a very difficult phenomenon to be exterminated in any country.

For representatives of the Ukrainian elite, regardless of party affiliation, this election is an opportunity to finally and irrevocably strengthen its already considerable influence in the regions. In exchange for loyalty to Kiev, local elites gain the right to dominate their areas with virtually no control. This is the essence of the new Ukrainian decentralization. Something like a new boyars under the kingship.

As long as the interests of the central and local elites coincide, the situation will be completely manageable for the king. But in the event that interests suddenly diverge ... There are few options, especially since in the current economic situation in Ukraine, the divergence of interests is predetermined. Snatch and saw off opportunities is not so much. And the further, so they will be less.

And then, perhaps, we will witness another separatism - economic. In comparison with which separatism of Donbass will seem a kindergarten. For linguistic and spiritual separatism is no match for economics.

As the Donbass events showed, not every citizen of Ukraine was able to fight for spiritual values. However, those who undertook to defend their interests and freedoms are no match for those who are ready to fight for a piece of bacon or a pack of hryvnias. But the second is much more. Mercenaries of life, if you will.

Decentralization and the elections (there are no doubts that they will be declared valid) create the preconditions for the emergence of economic separatism and, as a result, the emergence of specific principalities. Galicia, Bukovina, Polesye, Volyn. And those who are pulling the strings in the Ukrainian circus as specific princes. We, in general, already know almost all of them. Someone knocked out of the applicants, as they are trying to otpin Kolomoisky today, someone will come out of the shadows. But the essence is the same.

Ukraine's carve-up is coming to its logical conclusion. And, as shown by the figures appearing at the polling stations in Ukraine, the patience and trust of citizens, too. The whole question is what will follow the final disappointment: the Volyn principality or the Volyn people's republic. Time will tell.

We are in Yandex Zen
Results of the week. “I will ask the fact of the sale of the Motherland to be recorded in the protocol”
Results of the week. “Survived. We can say it was found in the dustbin, washed, cleared of cleanings - and he draws figs to us! ”
42 comments
Information
Dear reader, to leave comments on the publication, you must to register.