"The case was dismissed due to the absence of corpus delicti ..."

October 30 2015
22
The page from the diary of the war correspondent: "Autumn 1941 of the Year ... Today a joyful event happened in our platoon: several volunteers volunteered to explore - to take the" language. "They sat down, and on the front line, already in the German rear, they were watching: a tall, weighing under 90 kilograms, as it turned out - a connected postman. Vasily applied his head with his butt - a helmet got a decent dent, and the fascist recovered from our commanders. The lieutenant colonel who sent a soldier for reconnaissance was surprised: "Look what Vasil Kohn drashkin small, and what Fritz brought! "


For this attack Vasily Zakharovich Kondrashkin was presented to the award - the medal "For Courage".

Vasily Zakharovich passed the road of war with honor, he, like many others, brought the Victory closer, risking his health, risking his life ...

But why did these terrible words for honor and dignity arise: “The case was terminated due to the absence of corpus delicti ...” Before these short words, there was a long road in 37 years. The bitter road of a war and labor veteran Vasily Zakharovich Kondrashkin, whose name is now known and revered by those who cherish the memory of the living and dead defenders of the Soviet homeland. 19 August he could have turned 92 of the year. But more than a year, as he is not with us ...

He was born in the city of Kalinin (now - Tver) 19 August 1923. Komsomolets Kondrashkin did not wait for the execution of official 18 years for recruitment, and already in June 1941-th joined the army as a volunteer. Short military training in Podolsk, near Moscow, and on the most dangerous front — near Moscow, then he participated in heavy defensive battles near Mozhaisk. His friend Nikolay Shishkin dies next to him, and he himself is contused. He ended up in the hospital, and after recovering, in the rank of a sergeant, he participated in defensive battles near Stalingrad.

The former motorcyclist Kondrashkin, but already fired, is appointed commander of a rifle squad, consisting of the same youths as he himself was six months ago. Again, "mother infantry", the first line of fire, where they survive, like Kondrashkin, are mostly only wounded, and then if they manage to ship across the Volga and heal.

I dare to assert this on the basis of dozens of “living” testimonies, tourist and personal visits to Stalingrad. And even on the basis of statistics: the average life expectancy of a defender of Stalingrad was sometimes equal to three minutes. Reason refuses to believe in these facts and figures, but it was so.

Here, near Stalingrad, Vasily was overtaken by the second bullet - and again the hospital bed, until April 1943. After hospital treatment, he is sent to six-month courses for junior lieutenants (even during the war years they were taught!). The training took place at Volchanets station (Kursk region), after which Vasily became the commander of a platoon of an anti-tank unit of the 53-th separate anti-tank fighter division. 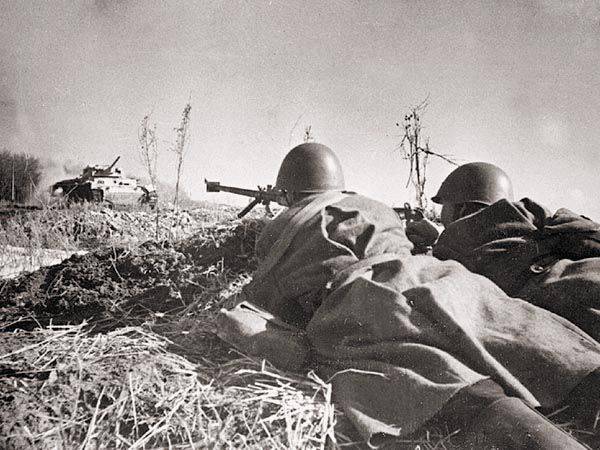 During the Belarusian offensive, Junior Lieutenant Kondrashkin commanded a rifle platoon. And this is also the first line of fire, and the Vanka-platoon, as they were called at the front, must be ahead.

But it was already 1944, the offensive year. The most effective and with fewer losses was the operation, named after the commander of the Patriotic War 1812 of the year - "Bagration", to liberate the long-suffering Belarus.

In it, the platoon commander took part, from beginning to end, as part of the main front, First Belarusian, under the command of a favorite of soldiers and officers, especially intelligence officers, army general, and then Marshal Konstantin Konstantinovich Rokossovsky.

In 1944, Vasiliy Kondrashkin was a platoon commander of the 224 Guards Rifle Regiment of the 72 Rifle Division until March of the 1945 year, and then, until the end of the war, the commander of the 215 Rifle Company of the 77 Rifle Division. Participated in the assault and the capture of Budapest, liberated Prague, stormed and took Berlin.

The war ended, but not for the commander of the company of guard Lieutenant Kondrashkin, it otherwise lasted almost all his life.

After the war, he served in Budapest, which at one time he had to take by storm. According to veteran stories and memories of the now deceased Golubov Mikhail Mikhailovich, Budapest was taken only after two months of the hardest fights. And what was the cost to our army one lake Balaton! There we had not to attack, but to defend. And this is two months before the end of the war!

Our troops were largely opposed by the Hungarians, the last allies of Nazi Germany. Basically, the unfriendly mood of the Hungarians remained after the war. “A single Soviet officer was killed by the Hungarians right in the tram. At the next stop, as if on cue, all the Hungarians came out of the car, and his driver stated during interrogation that “he did not see anything, he only looked ahead.” And the matter with the end. Every day something happened. Therefore, alone, albeit with weaponsand especially without him, it was dangerous to appear outside the location of his unit, ”Vasily Zakharovich summed up his story about the post-war service in the capital of Hungary.

I asked him: “And how did the Hungarian communists, the former prisoners of the fascist camps, especially the Jews, well, all anti-fascists, behave?”

The answer was strikingly concise and probably accurate: "Hush the water and below the grass."

And in such conditions, on one of the nights, Lt.Z. Kondrashkin.

A group of local residents came up - four people, began to provoke, a scuffle ensued. One Hungarian with a knife rushed at him, and this meant the inevitable death. Vasily Zakharovich somehow managed to dodge (he would then be blamed for not having any traces of beatings), and he, furious, shot at the attacker. Only then did the Hungarians retreat. They took away their murdered brother, and, of course, the knife, which later as material evidence could no longer be involved in the case ...

Further events went like a thumb. Kondrashkin about this incident outlined in the report. In turn, the Hungarians and our command wrote a complaint, in which, of course, indicated that "the officer used the weapon without the need for", "what kind of occupation regime," etc.

In the end, they demanded to hand over an officer to the tribunal. And he was given away. At the trial of VZ Kondrashkin could only repeat what he had previously written in the report. This court considered insufficient to justify.

On the Hungarian side, some kind of “official and progressive” Magyarke insistently insisted on his execution. She clearly fawned on her own.

Ultimately, the tribunal deprived Kondrashkin of his military rank, awards, and sent 10 to Kolyma years. Now would not break, remain a decent man. And he did not break. Such an example.

When he was released, there was an opportunity to take with him a piece of gold, which, nevertheless, he had in advance reserved for “free”, but he overcame himself. So left this bar somewhere in the taiga.

I will not write about camp life, as he said, because that is another topic. I will continue the story only about how Vasily Zakharovich fought for his rehabilitation and what the end results are. At the beginning, he ate a bit, did not want to go anywhere with any petitions.

But on the way to Kolyma I met one major, and then in Kolyma, and became friends with him. He nevertheless persuaded him and helped to write a petition to the Military Collegium of the Supreme Court of the USSR. Probably, they were not all legally convincingly stated, or because the term had already ended, but the punishment was reduced only by half - by five years.

It is not clear from this decision: was he to blame or was he performing military duty? But in any case, after this decision, Vasily Zakharovich is released. He was ashamed of conviction to go to his small homeland. It is difficult to prove to everyone that you are innocent. And he enlisted in the construction of the Bratsk hydroelectric station. He worked as a tractor-bulldozer, he had no other civil specialty.

And now, with that shock construction site, he again appeals with such a request not to the Military Collegium, but directly to the Supreme Court of the USSR.

I waited a long time for an answer, but he still came. I quote literally: “By the decision of the Plenum of the Supreme Court of the USSR of 19 June 1973, all court decisions in respect of VZ Kondrashkin was canceled, and the case about him was discontinued due to the absence of corpus delicti in his actions. ” Signature: “Art. Military Prosecutor of the Supervision Department, Colonel of Justice Starkov. ”

The conviction was completely removed from Vasily Zakharovich, the military rank was restored, with the “Guard Senior Lieutenant” raised, and military awards returned. And a spotless name! What is the most expensive.