NCO-foreign agents to protect the activities of sects in Russia?

October 27 2015
206
One of the indicators that the “friends” of Russia not only do not want to leave outside their area of ​​interest, “isolating from the rest of the world” (© Barack Obama), but, conversely, bringing “friendly” attention to intent, is the appearance on the streets Russian cities of such improvised book mini-markets: 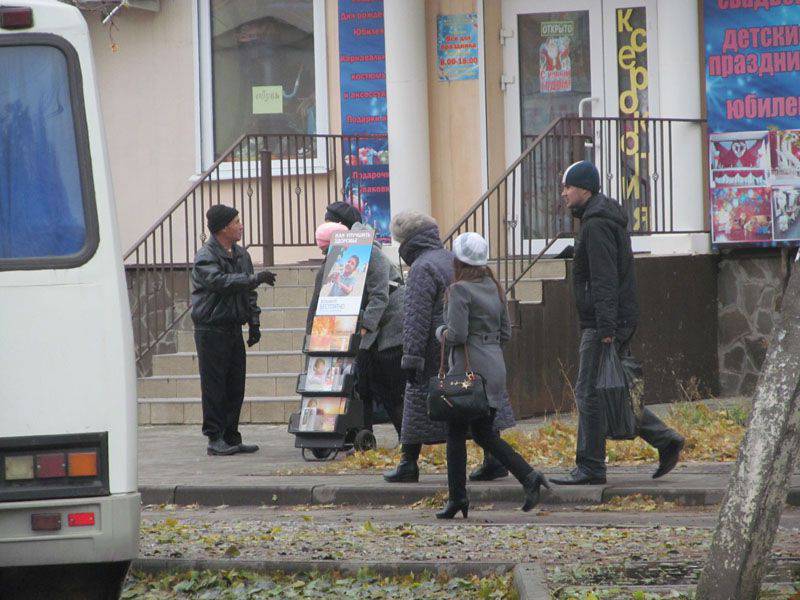 The women of Balzakovsky and, if I may say so, the Zabalzak age are standing next to wheelchairs, "shop windows" in almost any weather in crowded places (in parks, near bus stops, not far from the entrance to shopping centers) and, especially emphasized, "free of charge" share "important literature." This distributor (the kind of school teacher who has retired), captured in this photo (Voronezh region), has a literature about how to heal a person. At least, it is exactly such a sign with the image of a certain boy of Arab appearance and the title “How to improve health” (without a question mark, which means that the lady “knows exactly how” ...) has her “mini-library”. 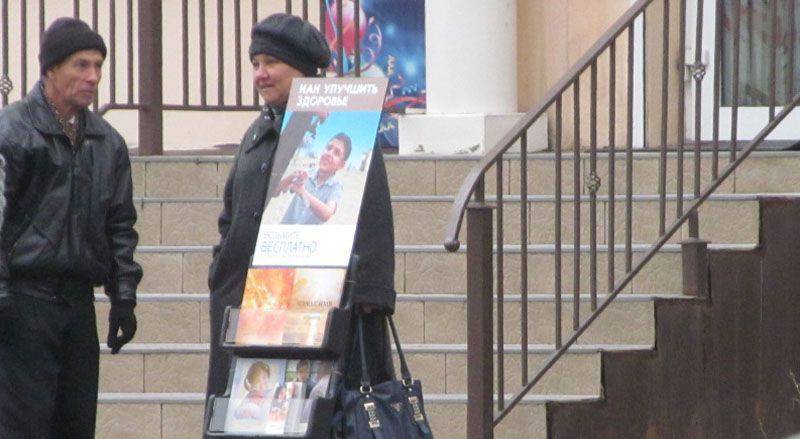 We approach the tray with brochures, get permission to take "everything that interests," and among the literature we suddenly find out what, to put it mildly, with a stretch can be called information about the recovery. - A brochure, named by the unknown author, “God's Guidelines Shows the Way to Paradise.” The radical method of "recovery", is not it? .. 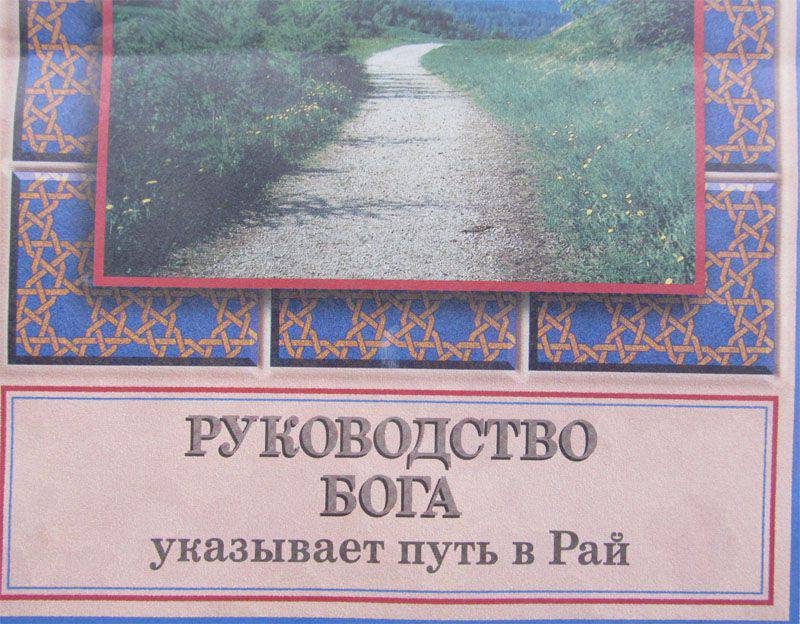 And the “doctors” who talk about this kind of “recovery” (“recovery” by coming to the next world), as it turned out from the data about the publisher, are our American “friends” (Brooklyn, New York) who composed this kind 14 medical gizmo years ago - in the 2001 year, and then, giving the task to their Spanish colleagues, they printed a brochure in Russian. It turns out that during the 14 years, the "well-being" methods have not changed ... 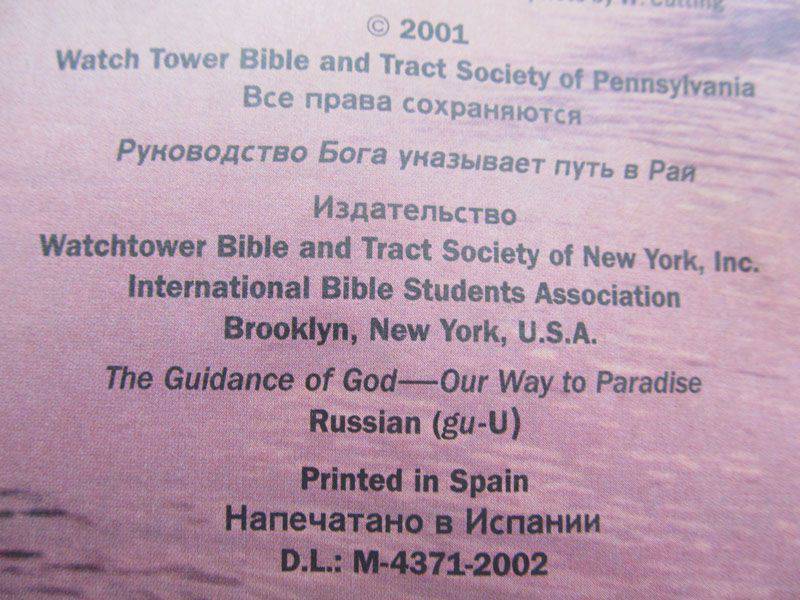 A woman who spreads this kind of literature tried to explain that “recovery”, they say, should be understood as purely spiritual, which can be a beginning of recovery and physical, too, that paradise can also be achieved on Earth, if, of course, you visit at least several events involving knowledgeable people. One of these events is a kind of lecture session, which will tell you how to deal with bad habits, including smoking.

15 years ago, my friend, who smoked 1,5-2 cigarettes a day, seriously decided to get rid of this pernicious addiction, and “came across” one of these ads. Like, all your problems will be removed as a hand after just a few visits to the “courses”. After a couple of visits, a friend realized that these lecturers, hardly having at least some medical education, needed to be carried off their feet. The fact is that the stories about how harmful smoking is for some reason were accompanied by colorful descriptions of the close approximation of the end of the world. During the “courses”, people who naively thought that they were really going to help to quit smoking, methodically hammered into their heads, that this was due to people like them, who did not find themselves in a single brotherhood, and wars, all sorts of political conflicts, there is a thirst for money. Even hunger and earthquakes - everything, it turns out, also from people like them ... And so that neither hunger nor earthquakes happen (as you can see, the "scientific" rolls over), you need to become one of them - one of God's people, as these people themselves call themselves "modestly". - It is necessary to become a Jehovah's Witness (SI) - and all problems will be removed as a hand ...

In the brochure, the cover photo of which is presented above, exactly the same ideology is promoted. The little book is replete with reports that “the signs of the last days are more and more,” that “the end of the world is not far off,” and that you need to act, swearing allegiance to the orderly ranks of the Jehovists, who will certainly be saved ... You will all die, they say “righteous and benevolent "Representatives of the sect, - but we will be saved ... And those who" are sure to be saved, in this world are about 8 millions (statistics of the Witnesses themselves) with cells in more than 200 countries of the world. Cell management is carried out from the main office of the organization, located in Brooklyn (USA).

The greatest growth of adherents of this organization with a claim to domination occurred in 90-s, when the Soviet cell of the Jehovists who had previously been limited in capabilities and with the collapse of the USSR spread its wings and adopted hundreds of thousands of people from the post-Soviet space. If in 1989, the sect number was estimated at about 3 million people, by 2000 this number had doubled. Growth continues, including through active, if not to say aggressive, activity towards children. 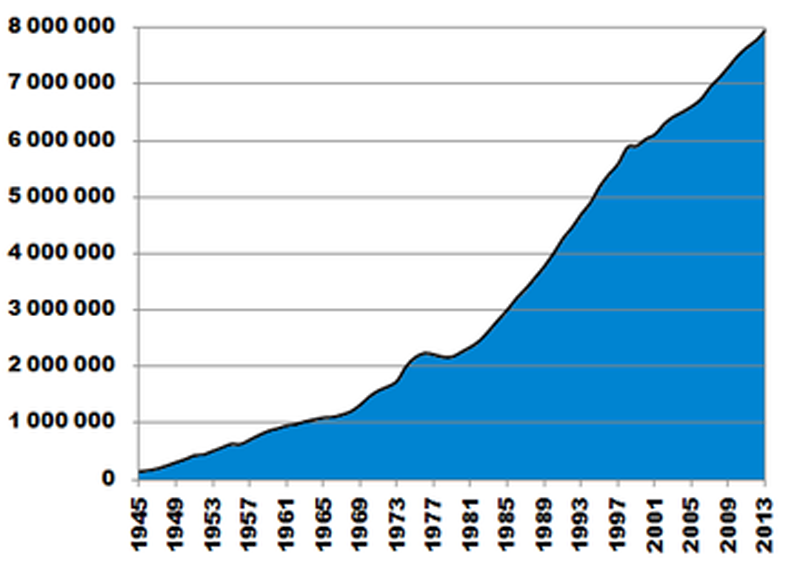 One of the scandalous cases involving representatives of the sect occurred in the Republic of Mari-El. In the city of Volzhsk, in August 2015, an administrative (administrative only ...) case was initiated into the act, which in fact pulls the kidnapping of the child. The girl, who played in the yard on the playground, in an unknown (originally) direction was taken away by an unknown woman.

After several hours of fruitless searches, the child, fortunately, was found. It turned out that the girl, taking her hand, was taken to a "lecture-seminar" in one of the buildings in which the commercial company office was located. As the mother of the child, Natalya, notes, the girl’s behavior after this incident has changed - Alena (the name of the kidnapped girl) at first behaved closed, occasionally starting a conversation that reflected the influence of representatives of the sect. Just one session lasting several hours - and the child has turned, sorry for slang, into a person laden with “global problems”. How can this one-time session affect the further formation of the girl's psyche? - the question is more than serious.

As a result of consideration of the administrative case, the lady who took the child to the “seminar” in the “headquarters” of the Volzhsk sectarians was fined 10 thousand rubles. Does such a modest punishment reflect the suffering that the mother had to endure during the many hours of searching for her child, is it adequate to the psychological problems that the girl herself faced?

The mother of the child decided to appeal to a human rights organization with the loud name "Man and the Law" (Chiz), working in the territory of Mari-El. Natalya asked for help in the proceedings on the activities of Jehovah's Witnesses in Volzhka, an activity that is aimed, among other things, at outright making children zombie with more than dubious ideas. However, Chiz stated that they could not help Natalia, as the management departed on some very important business trip, and when it appears, nobody knows. Thus, the organization, operating under the slogan “Man. Dignity. Right. Freedom ”, demonstrated that with the protection of rights, dignity and freedom, it’s not so difficult, it just protects the rights of people with obvious selectivity. The rights of some - yes. The rights of others are in no way ... It is understandable, because the inter-regional public organization ChiZ is a typical representative of non-profit organizations-foreign agents, who even publish information about the regional representation in English on the site (apparently, it was clear to the main grantors ask about the direction of expenditure of funds allocated).

From the report of the State Television and Radio Company "Mari El":


Can one foreign agent (NPO) go against another foreign agent, which is actually a sect? Of course not ... Here is a vivid example: at one time in Gorno-Altaisk, the case of the head of the local SI cell, Alexander Kalistratov, was being considered, who evaded military service (he was replaced with alternative military service), and then he began to actively distribute materials recognized by extremist experts. We are talking about the publications of the so-called "Watchtower." From expert evaluations (Kemerovo State University):

The whole autobiography (Kalistratova) is presented as история the struggle of the righteous man with the unjust state-ideological system. (...) The hero tries in every way to avoid conscription, and these attempts are described with a positively-estimated tonality. (...) Consequently, the text of the brochure “Awaken!” Contains an incentive to refuse to perform civil duties related to military service.

The text “The Struggle for the Holy Place” contains a description of the wars for control over Jerusalem. The pathos of the text is that this whole struggle did not bring people closer to God. In the quoted fragment it is said that the wars of Christians for the Holy places actually denounced Christians of idolatry, discord, bloodshed. Along with this, the text does not report on the positive aspects of the life of Christian peoples and countries. Consequently, the text implements the original installation to create a negative image of the Christian religion and the peoples who profess it. (...) contains a deliberately negative image of the Christian religion, which provoked the peoples to bloodshed and discord.

Together with the beginning of the court hearing, both by the wave of a magic wand, both Russian and foreign “human rights activists” intensified. In particular, the notorious Lev Ponomarev, who heads the movement For Human Rights, together with Mr. Velimudr (as one of the leaders of the Russian Jehovah’s cell calls himself) took part in a press conference in which an assessment of the activities of Altai law enforcement officers in this case It was called “use of an administrative resource against public organizations”. And the Canadian representation of the Reuters news agency issued material that "Russia uses laws on extremism against dissidents." The Commissioner for Human Rights in the Russian Federation, who at the time was Mr. Lukin, went even further, saying:

Criminal persecution of a religious organization and its representatives for the open use of their religious literature is a method that brings back to memory the Soviet practice of persecution for the faith.

We are in Yandex Zen
Raising the retirement age. Forced measure for the development of the economy or a threat to the social order of the country?
Sects as a threat to the national security of Russia
206 comments
Information
Dear reader, to leave comments on the publication, you must to register.