Howitzers of D-30 howitzers at 100 height 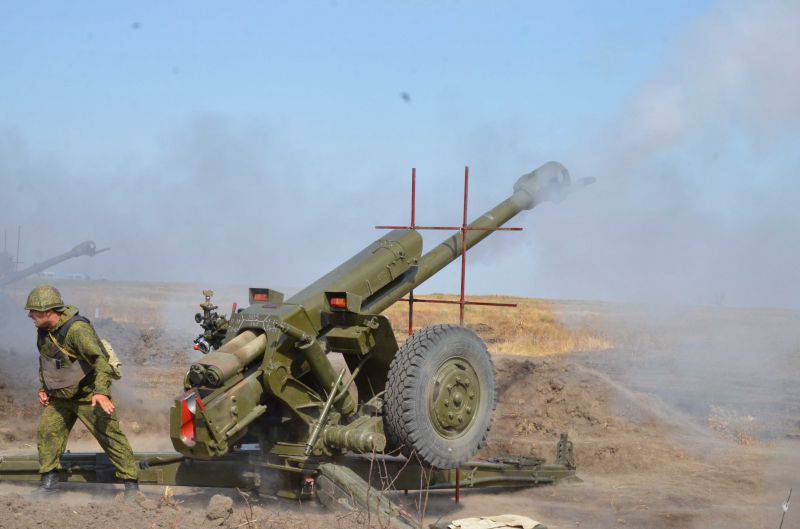 The best gunners of the year 2015 were named after the All-Russian field training competition among the commanders of the artillery battalions and the batteries of the internal troops. Competitions were held near Novocherkassk near the village of Kadamovsky (Rostov region), where the training center of the North Caucasus Regional Command of Internal Troops is located.

The height of the firing positions at which the competitions were held was 100 meters above sea level.

Here came the commanders of artillery batteries - 17 artillery officers from all the regional commands of the internal troops of the Ministry of Internal Affairs of Russia.

The gun crews of the artillery unit of the separate Order of Zhukov operational brigade were involved in providing the fire component of the competitions. 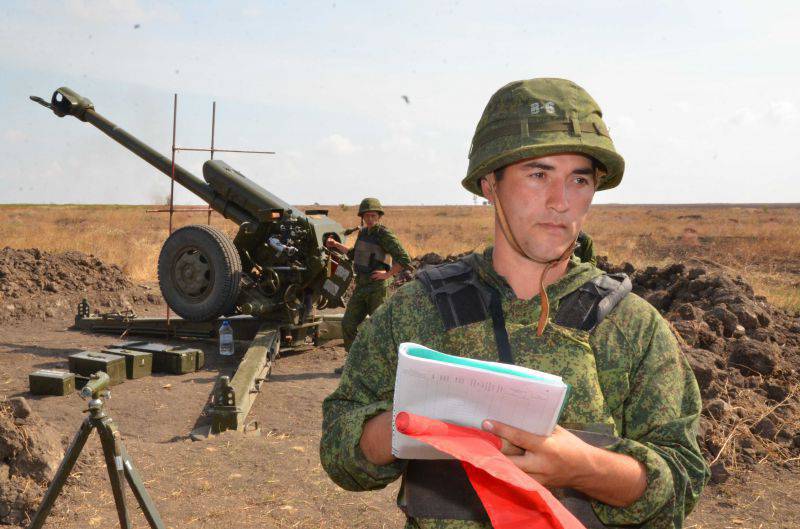 From the coordinated actions of the military depends on what assessment will receive the contestant.

In the calculation - five people: the commander of the gun, shell, loader, gunner, charging.

The teams arrive at the control center, the radio telephone private soldier Abdul Amarov writes down the task, immediately transfers it to the commander. At the same time, the calculator, senior sergeant Ruslan Arakcheev, maps the coordinates on the map, gives the calculation needed for the fire control devices. 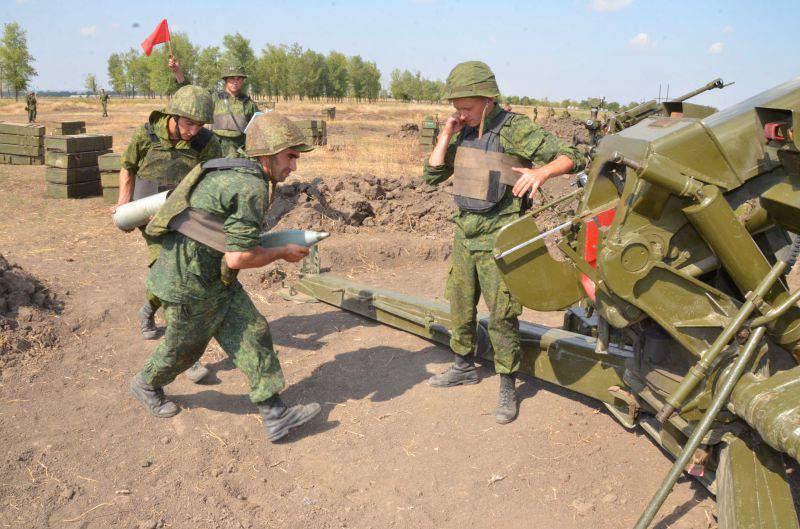 Senior Lieutenant Vitaly Pakhomov is responsible for the safety of the shooting, for ensuring that front-line security measures are not violated, there are no dangerous fly-turns, beyond the firing range. For two days of work no violations were recorded.

How difficult it is to control the fire will be discussed at the end of the article.

A few kilometers from the location of the howitzer battery, at the second height, 115 meters above sea level, the main command post was located. Here were all the contestants who transmitted their data to defeat the goal. It is noteworthy that, not far from the modern command post in 2000, during the exercise, another command post was equipped and earthworks were carried out, during which an unknown military burial was unexpectedly discovered. Judging by the remains, eight people wounded by Soviet soldiers were shot here by the Germans. Discovered medallions, watches. It turned out that during the Great Patriotic War there was a hospital here. Obviously, the Germans captured him. According to Lieutenant Colonel Sergey Viktorovich Zharov, the remains were reburied with honors elsewhere. So the memory of the past and the present echo each other ... 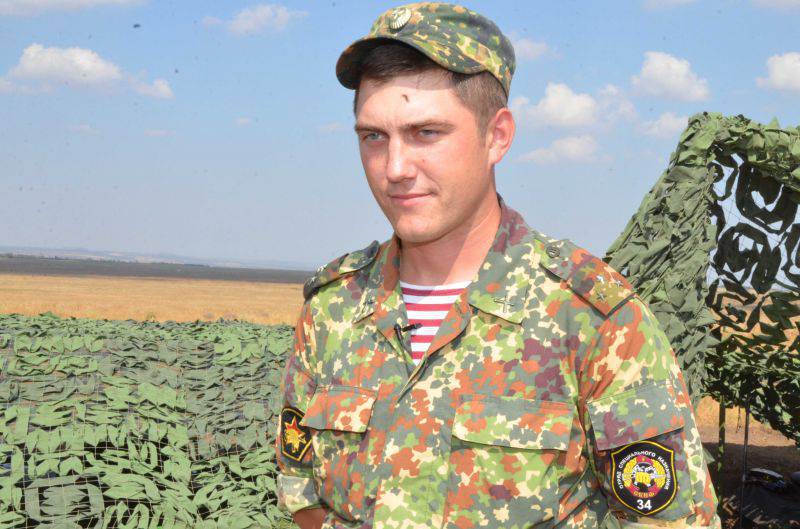 According to the commander of the mortar battery 34 of the special detachment "Skif" (dislocation - the city of Grozny) Dmitry Stakheev, these competitions among the gunners of the internal troops will allow you to see the strengths and weaknesses. Dmitry came to these competitions for the first time, the command sent him here, based on his work results. “Strong gunners from different regions of the country have gathered here, who can learn from, for example, the method of shooting and other necessary moments in the field life,” explained Staheev.

- What is the peculiarity of the work of the mortar division in the activities of the special purpose detachment?

- The most important feature is the speed of action. It is necessary to combine two kinds of troops - artillery and special forces, in order to get a quick response artillery. Indeed, in the field of activity of the detachment, very often there are small distances, and therefore it is necessary to be able to make accurate shots, ”said Stakheev.

He cited as an example the case when in 2012, near Kizlyar, in the area of ​​one village, a detachment drove for three days through the channels and mountains of the enemy and could not destroy it at all. Then the command decided to use a new, just-formed mortar unit. And they showed effective "fire impact on the enemy", destroyed it. After this episode, the gunners caught on and were taken to the special forces. Before that, some skeptical voices were heard: “How is it - artillery and special forces? Will they be able to work quickly and efficiently? ”But after this incident, the skeptics became silent, and then disappeared altogether. Because the gunners have shown themselves in other cases of their work effectively and smoothly.

Yesterday Stakheyev had the most successful shot, he took into account all the amendments and, maybe, somewhere at the level of intuition, he was able to fulfill the task set before himself. After all, some competitors without special experience on the field sometimes "drove" a projectile across the field.

Moreover, in competitions it was necessary to demonstrate my ability not only to carry out howitzer firing, but also to demonstrate my physical qualities: run, perform a whole set of exercises on different outfits, and be able to skillfully drive a machine for transporting projectiles (GAZ-3308). The maximum number of points that the winner had to score - 800. At that time, when we talked with Stakheev, he had an 351 score.

So, the competition under the villages of Kadamovsky over the course of four days revealed several winners among the artillery battalions of the internal troops. In the first place is captain Denis Karpenko (village Lebyazhye, North-West Regional Command).

Among the commanders of artillery batteries, the first place was taken by Senior Lieutenant Konstantin Migashkin (Central Regional Command, the village of Sofrino).

“Every year the tasks at the exercises are becoming more complicated, the number of points gained also increased, responsibility grows, it became more difficult to win,” explained the head of the artillery headquarters combat team of the Chief Command of the Interior Troops of the Russian Interior Ministry, Colonel Oleg Yatsyna.

Exactly a year ago, Senior Lieutenant Alexander Hadarchenko, commander of the battery of an artillery regiment of 46, a separate Order of Zhukov operational task force (Grozny), won this battle in the stubborn struggle won over the "masters of fire" in the interdepartmental competition and for the first time in 20 history participation of officers of internal troops in this competition of professionals won the first place at the All-Army competition stage.

Ctrl Enter
Noticed a mistake Highlight text and press. Ctrl + Enter
We are
Weekly summary (9-15 of January) on the military and social situation in the DPR from the military officer "Mag"Competitions FSKN Rossi tactical shooting - 2014 year
18 comments
Information
Dear reader, to leave comments on the publication, you must to register.