He did not leave the pilot's seat of the year 73 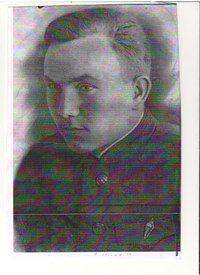 Search engines finally found the remains of a pilot. He sat in his metal pilot's chair for several decades, his remains, covered with earth, rested near the river.


On the bank of the river Hadzhiko that flows among the picturesque ridges of the Western Caucasus, not far from the village of Maryino, a local resident found fragments of the LaGG-3 fighter scattered along the ridge of the ridge. The remains of the pilot were not found, although there were rumors that they were buried. According to engine numbers, experts have established the name of the pilot. It turned out to be Junior Lieutenant Fedor Dmitrievich Poldnev, who lived in the village of Gnilovskaya before the war.

Over time, a monument to the pilot was erected at the pedestrian route along the bank of a mountain river, on a ledge of a rock. Later, a coffin was brought to the memorial in the village of Lazarevskoye, in which machine-gun shells and a fragment of the fuselage were laid. All this is solemnly interred. But Kuban search engines continued to search for the remains of the pilot.

We examined the slopes of the mountain, including metal detectors. And the fallen hero “responded”: on one of the slopes, about seventy meters from the LaGG-3 crash site, they began to “call out” the metal parts of the pilot's seat. The remains of the pilot rested on it on an unopened parachute. Probably, the pilot was seriously injured or killed, and the seat was thrown aside when the plane collided with the ground. Over time, the body fell asleep, and the slope "moved down" below the river.

In late August, a rally and a funeral ceremony for the burial of the remains of fighter pilot Junior Lieutenant Poldnev Fyodor Dmitrievich were held in the Kalinin farm. Seventy-three years ago, during a combat mission, his plane caught fire and crashed near the city of Tuapse, shooting down three Nazi bomber.

But back in time. It is no longer possible to establish how a Don Cossack from the village of Gnilovskaya, Dmitry Poldnev, turned out to be in the village of Kommunar of the Kursk Region. But it is known that he married a beautiful local resident Tatiana. In 1920, their first child Fedya was born, three years later another son, Mikhail, in 1927, his daughter Valya, and Anatoly in 1930.

As Vali’s daughter, Natalia Alekseevna, told me about the grandfather in the family, there was no talk. Probably at the beginning of 1930's, Dmitry Poldnev was repressed, this explains the silence of his relatives.

Around 1932, Tatyana Arkhipovna with four children moved to Rostov. Probably, the relatives of their husband sheltered them and helped build the house. In the personal file of Fyodor Poldnev there is an address: "The city of Rostov-on-Don, Nizhnegospitalskaya embankment, 7".

I think the scribes just messed up and Nizhnegnilovsky turned into Nizhnegospitalskuyu. In Rostov, this street has never been. Tatiana Arkhipovna worked somewhere, the children studied - most likely at school number 77. Granddaughter Natasha recalls that her mother Valya worked at the fish farm. In the village of Gnilovsky, the fish farm was one - on Rybak Square. Obviously, the family lived nearby. The boys, like the rest of the Gnilovskaya children, spent their free time from lessons on the Don or on the OSOAVIAHIM airfield. Jumping with a parachute was everyone's dream. Fyodor Poldnev, too - in his photograph you can see the icon of a parachutist.

4 November 1939-th Fedor became a cadet of the Yeysk Naval School of Pilots named after Stalin, which he graduated in August 1941-th, when the Great Patriotic War was on.

Junior lieutenant was sent to the 32nd Black Sea Fighter Aviation Regiment fleet. His first squadron was based in the village of Lazarevskaya in the Krasnodar Territory.

In the summer of 1942, the enemy rushed to the Black Sea, to the bases of the fleet. The Nazis captured the city of Maykop. Daily were air battles. On August 11, an armada of German bombers moved to the port of Tuapse. Several of our fighters took off to stop them, including LaGG-3 junior lieutenant Fedor Poldnev. 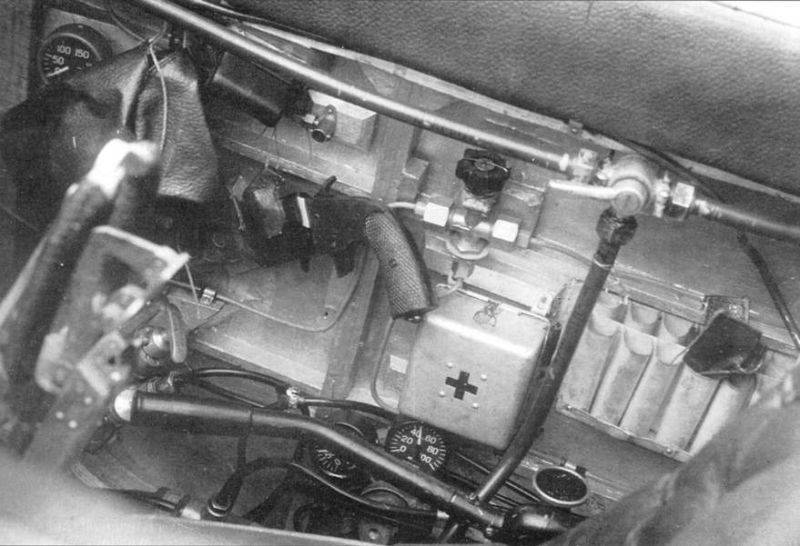 The Germans did not break through to Tuapse. But in that battle the death of the brave Fyodor Noon fell.

The award list, compiled the day before his death, 10 August 1942, says: “During World War II, he showed himself to be an initiative air fighter, boldly combining young enthusiasm with the intellect of an experienced pilot. As a result, has excellent performance, both in the technique of piloting and in the field of the ability to fight, bravely fought with superior enemy forces. He conducted eight air battles on his own, shot down three enemy planes and one in the group. ”

19 January 1942 of the year, flying to the Novorossiysk region, noticed three enemy U-88 type bombers marching for the bombing of Novorossiysk. With a bold maneuver, he attacked a link and, as a result of prolonged attacks, shot down one Yu-88 type bomber, which fell near Nikolayevskaya village on dry land.

16 June 1942, in the area of ​​Taman, was engaged in air combat as part of four LaGG-3 with a group of enemy aircraft Me-109. Bold attacks in the group shot down one Me-109 and one knocked himself.

After about a month and a half, 3 of August 1942 of the year, while repelling the enemy’s attacks committing a raid on a naval base located in the city of Tuapse, boldly attacked an entire link of Xe-111, one of them was beaten off and knocked down in the Tuapsinki area. Moreover, the rest of the enemy’s aircraft cowardly fled, fearing one Russian plane.

According to award documents, during the Great Patriotic War, Fedor had 127 sorties “without a single accident. Loyal to the party of Lenin-Stalin and the Socialist Motherland. "

By order of the Navy Commander No. 49c dated August 13, 1943, Junior Lieutenant Fyodor Poldnev, who had been in the Red Army since November 1939 and fought as part of the 32nd Aviation Regiment of the 62nd aviation Black Sea Fleet Airborne Brigade was presented to the Order of the Red Banner. He did not have time to get it. Yes, I probably didn’t know what was presented to him. 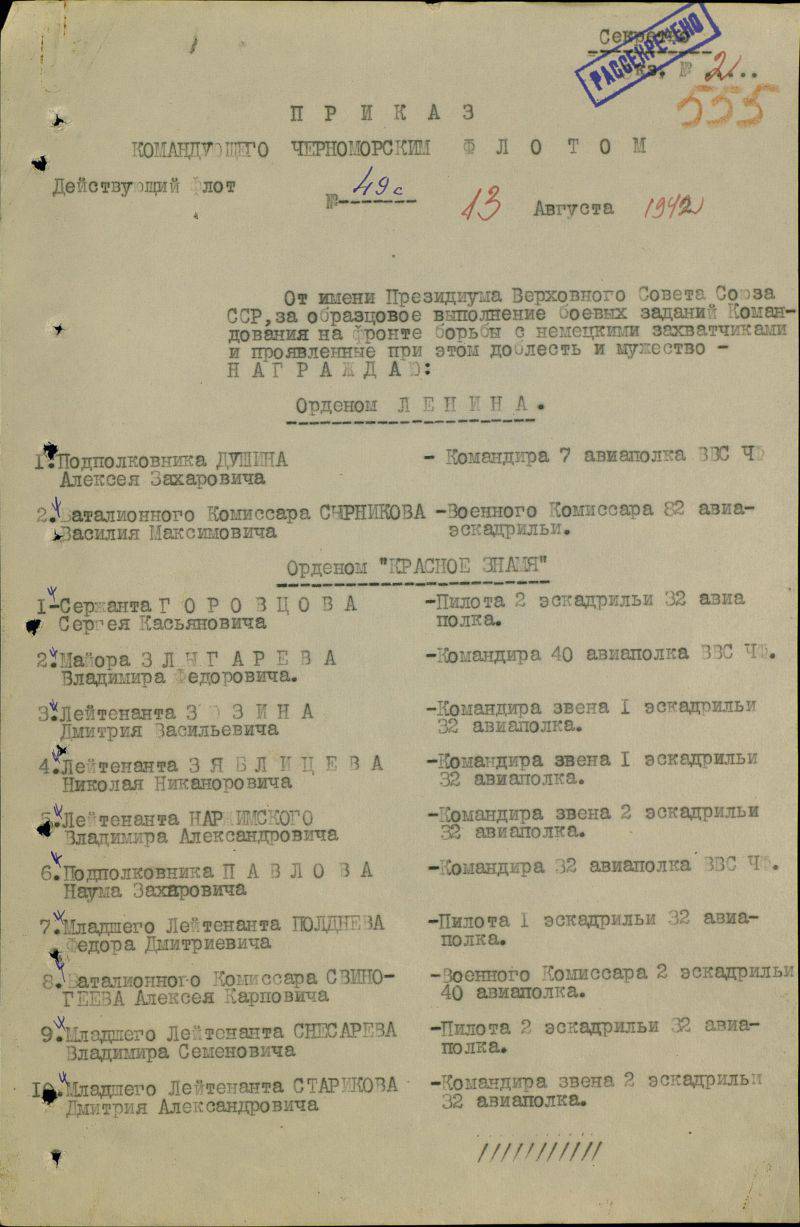 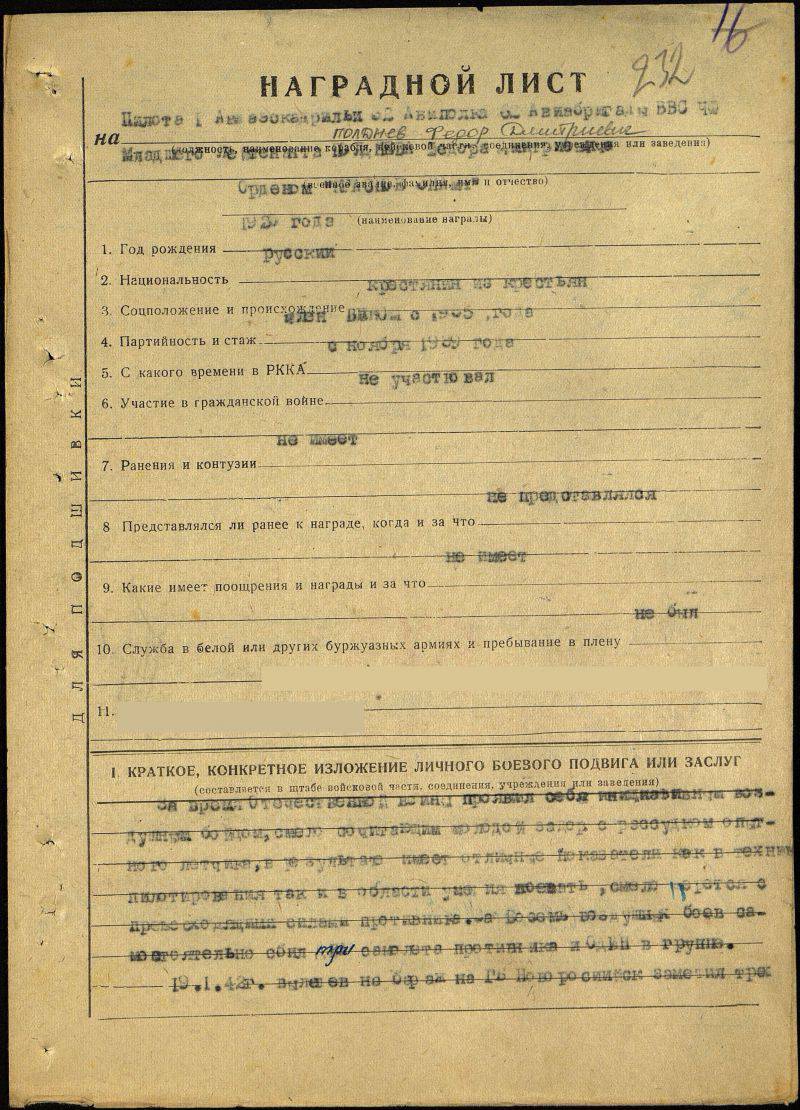 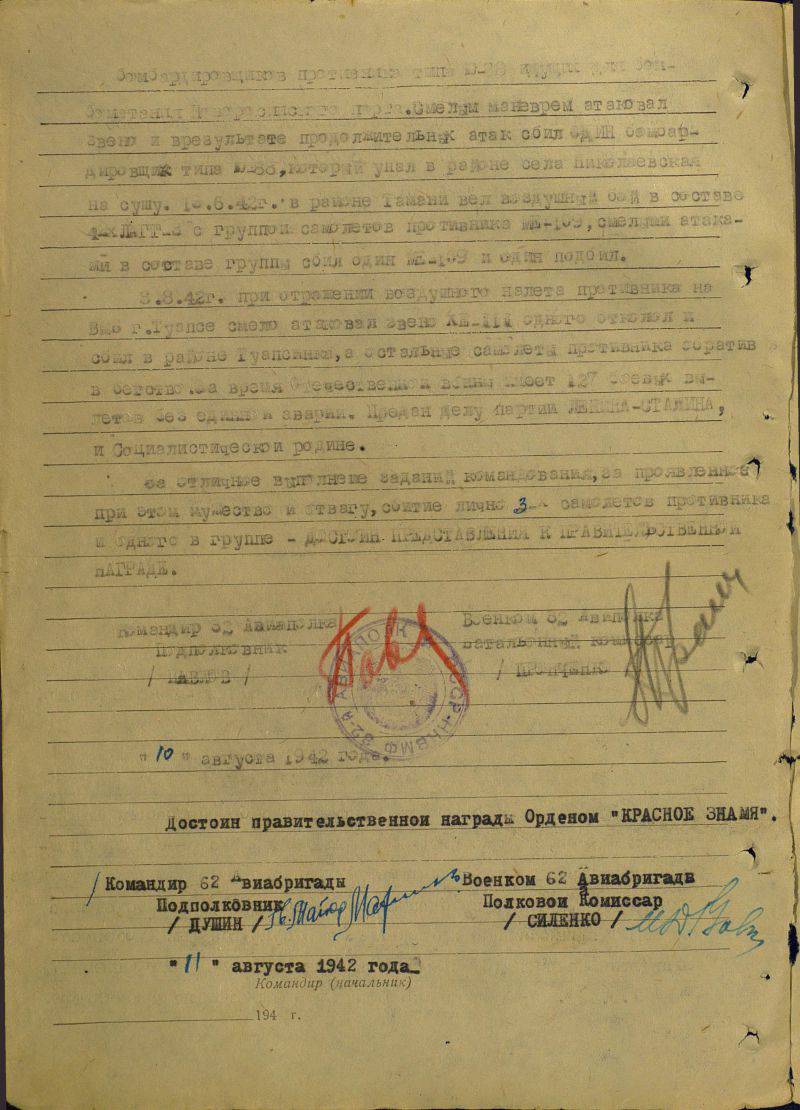 The pilot's mother, with his younger brothers and sister, lived in the occupation in the village of Gnilovskaya. Like everyone, it was hard for them. And then the Germans began to drive young people to assembly points for shipment to Germany. Valya's daughter also got on the lists. Therefore, Tatyana Arkhipovna decided to urgently leave Rostov with her children. They reached the Kalinin Farm in the Tselinsky District of the Rostov Region, where they settled. Today neither Tatyana Arkhipovna, nor her daughter Vali, nor her sons are left alive. But the clan was continued by the grandchildren, the children of her children. They decided to rebuild the remains of the pilot Fedor Dmitrievich Poldnev near the grave of his mother. On August 24 in Sochi, the remains of a Rostovite hero were handed over to representatives of the Tselinsky District.

To honor the memory of the deceased and the guests from Rostov-on-Don and the village of Celina, relatives, veterans, schoolchildren, and fellow villagers gathered in the final journey of the war hero. The rally was opened by the head of the Olshansky rural settlement V.V. Velitarian. He said that we should always remember those people who defended the world at the cost of their lives, this is especially important for the younger generation, which will pass on our moral and spiritual values ​​to our children. To pay tribute to the memory, to remember our heroes and worthily accompany everyone who is restored in the ranks of the heroes of the past war to the last journey is the civic duty of all living.

Tribute to the dead soldiers was also expressed by the deputy head of the district administration M.L. Surkov: “Years and decades pass, but the memory of the exploits of the soldiers of the Great Patriotic War and the liberators will forever remain in people's memory. And we must pass this memory from generation to generation, and then this chain will never be interrupted. And we will always remember our wonderful fathers and grandfathers! ”

The family and friends of Fyodor Dmitrievich thanked the search engines for their dedicated work and transferred personal items and fragments of the plane to the local museum of the Zhuravlev school. With military honors under weapons volleys the remains of the Soviet pilot were buried in their native land.