And Qatar there too 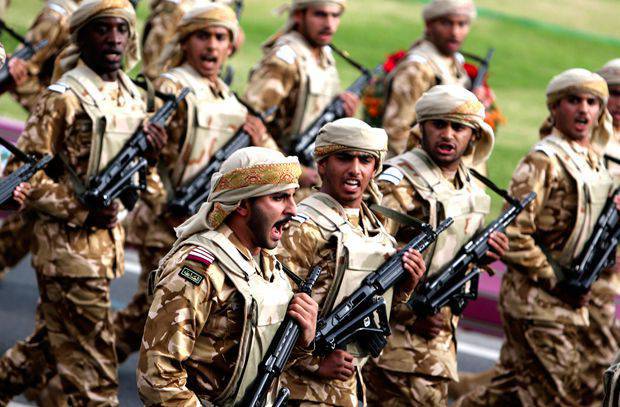 Who is preparing a military invasion of Syria - Qatar or is it the USA?

Since the beginning of the Russian military operation in Syria, rumors have repeatedly appeared that other countries are also preparing to send their military units there. That China is allegedly preparing the transfer of soldiers of the People’s Liberation Army to the Arab Republic, then, they say, Cuban special forces have already arrived at Damascus airport. On Friday, the American media are already writing that President Barack Obama is under pressure from officials who are in favor of bringing a military contingent into Syria. Qatar’s Foreign Minister Khalid al-Attiyah also said he did not rule out a military invasion of Syria. In the perspective of the direct participation of a large number of countries in the Syrian war, many again see the shape of the Third World War. But so far everything is in words.

“We, with our Saudi brothers and Turkey, do not exclude any options for implementing the protection of the Syrian people,” Khalid al-Attiyah said in an interview with CNN Arabic. “If the military option is needed to protect the Syrians from the cruelty of the regime, yes,” he answered the question of whether Qatar considers the military option. According to the minister, there are many ways to implement this option, but he did not name the methods themselves.

According to experts, Qatar’s military involvement can hardly seriously affect the course of the war in Syria, but its financial resources in terms of supporting terrorists cannot be underestimated. It may well be that such statements sound like preparation for military intervention by other participants in the anti-Igilov coalition in Syria, including the United States.

Director of the Center for Strategic Conjuncture Ivan Konovalov notes that Qatar is not militarily strong enough that its participation in the Syrian conflict in any way changes the situation. Moreover, Qatar supports certain groups that are fighting against the legitimate Syrian government, and thus, like Saudi Arabia and Turkey, is in fact already involved in this conflict.

“I do not think that the military involvement of Qatar can change something. Moreover, he is a member of the same coalition against the "Islamic State", from whose actions virtually nothing changes. This coalition is more like fighting against IS, rather than actually leading them. Therefore, I would not give any special significance to the statement. As for the combat capabilities of the Qatari army, it suffices to recall how the 10 coalition of Arab countries with Qatar’s participation in the fight against Shiite Hussite rebels discarded itself in Yemen, ”the expert believes.

Militarily, all the Gulf monarchies are supported by the United States and, more recently, France. Qatar has mainly French military equipment at its disposal, as well as equipment from other European countries and the United States. The armed forces of Qatar are small: subject to fleet, the army and the air force their number is less than 12 thousand people, including three mechanized brigades and one light - the royal guard.

Qatar is a major exporter of petroleum and petroleum products, and in terms of natural gas reserves it occupies the 3 place in the world. Thanks to the income of Qatar, radical groups fighting in Syria are living quite well. Former Iraqi Prime Minister Nuri al-Maliki, in the summer of 2015, said that there are three countries behind the financing of the Islamic State: Saudi Arabia, Qatar and Kuwait. However, Qatar himself joined the coalition against the IS and denies these accusations.

According to the Minister of Foreign Affairs of Qatar, Khalid al-Attiyi, the authorities of the country will continue to support the Ahrar al-Sham group, since they consider it not an extremist, but belonging to a “moderate” opposition. Also, Riyadh has always traditionally supported the Sunni radicals associated with Al-Qaida.

Researcher at the MGIMO Analytical Center, lawyer, PhD in Law Sharbatullo Sodikov remarks: the words of the Minister should be understood as a statement of continued support for terrorist groups in Syria. Qatar’s promise to protect the Syrian people is the application of double standards in action: the terrorists turn out to be civilians.

He is convinced that there will definitely be no military strike from Qatar, since he will have to reckon with Russia, which supports Syria. Consequently, there is only one option: the unofficial financial support of terrorists, the expert believes.

"At the international level, we should take the initiative to impose sanctions against countries that help terrorists, like Qatar," Sodikov believes.


Russia needs to build up the grouping

Qatar and the United States cooperate militarily. In particular, the 609 th Center for the control of air and space operations of the Central Command of the US Armed Forces, one of four similar foreign centers of the US Army, is deployed in the emirate. It was not by chance that after the statement of the Qatar Foreign Minister, information appeared that the United States was also preparing a military invasion of Syria.

October 23 The New York Times, citing sources in the Washington administration, wrote that amid the Russian military operation in Syria, the United States has to look for effective methods to solve the Syrian crisis. According to the publication, during the meeting in the White House, Secretary of State John Kerry advocated the creation of a flight-free zone in order to "protect the Syrians from permanent air strikes of the Russian Federation." In addition, according to many officials, it is necessary to increase the participation of the American military in Syria. In connection with this, the pressure on President Barack Obama is growing.

Planned "safe zones" may appear on the borders of Syria with Turkey and Jordan, they are planned to be used for the delivery of humanitarian supplies, and in fact - to help the "moderate" Syrian opposition supported by the Americans. Creation of zones will require the entry of an American military contingent. In this case, the risk of a collision between Russian and American forces will increase.

First Vice-President of the Academy of Geopolitical Problems Konstantin Sivkov reminds: he already wrote and said that the Russian form of participation in the Syrian war would be the reason for the US intervention. The analyst is sure: Qatar does not have the means to implement it and therefore only acts as a formal initiator, and the troops will be introduced by the Americans, and this military contingent can be very serious.

“The only way out in the current situation is the radical build-up of our group. The Russian Federation must be ready to deploy its troops, as well as to ensure that Iran introduces its large-scale armed forces into Syria. The Islamic Revolution Guard Corps could provide at least 100 thousands of people. Russia should increase the number of air groups in 5 – 6 times, as well as increase the supply of weapons, support, military advisers to Syria. All this will make it possible in a short time to radically change the course of military operations, ”Konstantin Sivkov is sure.

Ctrl Enter
Noticed oshЫbku Highlight text and press. Ctrl + Enter
We are
What you didn't want to know about EnglandInterview of President Bashar Al-Assad to the Sunday Times newspaper
50 comments
Information
Dear reader, to leave comments on the publication, you must to register.