October 24 2015
25
The infantry is a clan of the PLA Ground Forces. Depending on the degree of saturation with transport and combat vehicles (infantry fighting vehicles, armored personnel carriers), infantry formations are divided into purely infantry (rifle), motorized and mechanized. Together with tank troops they form the basis of the latter.


According to Chinese sources, the following tasks are assigned to infantry forces: in the offensive (counteroffensive), they must, together with the tank forces, break through the enemy defenses, defeat the groups of his troops, capture and gain a foothold in the liberated territory, creating conditions for the further success of the offensive.

In defense, they are designed to hold the occupied areas, lines and positions, repel enemy strikes, hit his manpower and equipment, creating favorable conditions for an offensive (counteroffensive) operation. 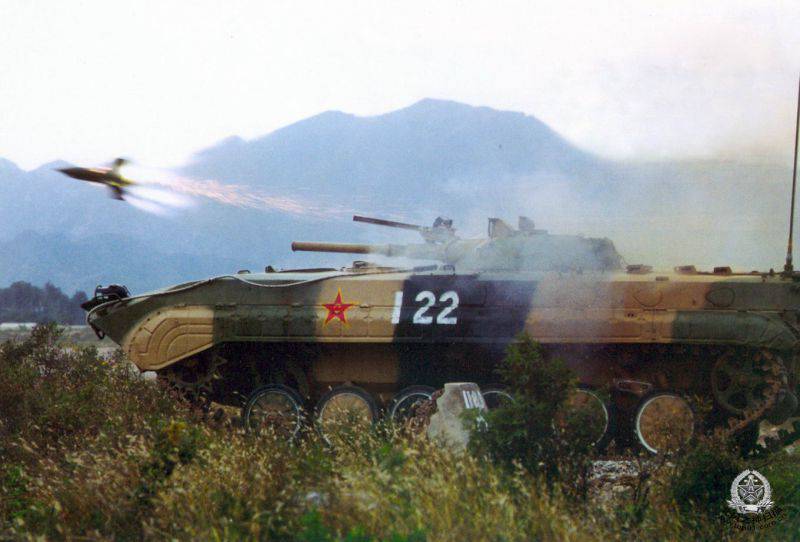 One of the most numerous in the fleet of combat armored vehicles of the Ground Forces of the PLA are tracked infantry fighting vehicles - Type-86 / Type-86А (export designation WZ-501) and Type-92 / Type-92А. BMP Type-86 (WZ-501) is an unlicensed copy of the Soviet floating BMP-1. It has a crew of three and can carry troops in the amount of eight people. Its main tactical and technical characteristics: power of a diesel engine Type-6V150-292 hp, maximum speed on the highway 65 km / h, maximum speed afloat (the movement is carried out by rewinding the tracks) - 8 km / h, power reserve on the highway - to 510 km, afloat - to 100 km. Reservation - bulletproof (splinterproof). Armament: 73-mm smooth-bore semi-automatic gun, which has a firing rate of up to 8 rounds per minute, 40 rounds with cumulative and high-explosive fragmentation grenades are included in the ammunition, the maximum range of 1300 and 2900, respectively. Paired with a gun 7,62-mm machine gun and four anti-tank guided missiles "Hongjiang-73" (HJ-73), which are an unlicensed copy of the Soviet missile 9М14М "Malyutka". The maximum range of shooting - 3000 m, armor penetration - up to 400 mm. 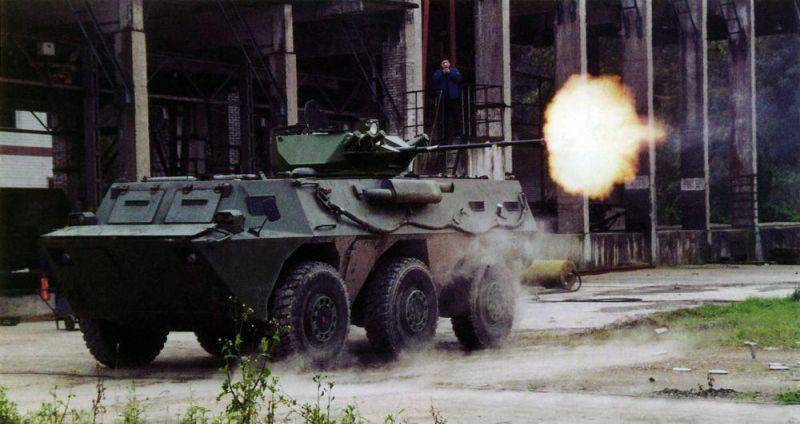 BMP Type-92 / Type-92В (WZ-551) is based on the French Renault VAB armored personnel carrier, has the same layout of units and is virtually identical in appearance, but differs from the French in size, combat weight and a number of other parameters. The Chinese BMP has a three-axle wheelbase, equipped with a diesel power unit with an HP 320 power. (a licensed copy of the German diesel engine BF8L413F), providing maximum speed on the highway to 90 km / h and cruising range to 800 km. BMP has the ability to overcome water obstacles, moving afloat with the help of two jet propulsion with a maximum speed of up to 11 km / h. Reservations - bulletproof, including against bullets caliber 12,7 mm. Armament: the combat module is represented by a single turret-type turret with an 25-mm rapid-fire automatic cannon, providing the ability to fire single shots, short shots (at 3 shots) and long bursts with a combat rate of fire to 200 rounds per minute. Ammunition - 400 shots with armor-piercing and high-explosive fragmentation shells, with a gun paired 7,62-mm machine gun. The crew of the BMP - 3 man, the capacity of the troop compartment - 9 military personnel with weapons and ammunition. BMP Type-92 / Type 92В are produced in modifications: “tank destroyer”, combat reconnaissance and patrol vehicle (BRDM), command and station and ambulance vehicles, in the version “tank destroyer” it is equipped with several launchers for ATGM. 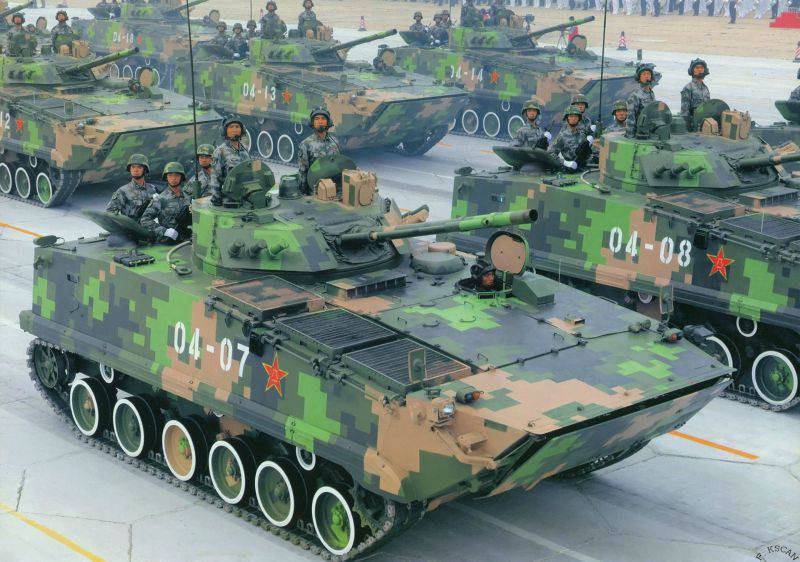 Starting from 2006, the formation of the main (maneuverable) forces of the PLA Ground Forces, Guangzhou and Nanjing Military Districts began to enter infantry fighting vehicles (BMP) of the new generation ZBD-97 (Type-97). The combat module of the specified BMP is copied from the Russian, known under the designation "Bakhcha" (according to some information, the Chinese officially acquired the license for its production from the Tula Instrument Engineering Design Bureau). The internal layout of the machine is developed by Chinese experts independently.

The ZBD-97 BMP is equipped with a 100-mm smoothbore weapon - a launcher, which in addition to standard projectiles allows the use of anti-tank guided missiles (ATGM) through the barrel bore, and an 30-mm automatic gun coupled to it, as well as an 7,62-mm machine built in with it. There are also two 7,62-mm course machine guns. The machine has the ability to move afloat with the help of two jet propulsion. This type of BMP is planned to be used in conjunction with new Type-98, Type-99 main battle tanks of various modifications.

One of the most massive armored personnel carriers is the BTR Type-92 / Type-98В, created on the basis of the BMP of the same type. The Type-92 / Type-98В armored personnel carrier differs from the BMP only in that it is equipped with an 12,7-mm machine gun instead of an automatic cannon. The dimensions of the BMP and BTR of this type allow them to be transported on heavy-duty military transport aircraft, such as the Russian Il-76 and advanced Chinese military transport aircraft such as Y-20.

It is noteworthy that during the modernization of the fleet of armored combat vehicles (ACV) of the Ground Forces of the PLA, the number of tracked vehicles steadily increases from year to year and the number of wheeled vehicles decreases.

Ctrl Enter
Noticed a mistake Highlight text and press. Ctrl + Enter
We are
PLA Navy Opportunities to Combat Carrier Strike Groups. Part 2Soldiers of the Middle Kingdom are torn into battle
25 comments
Information
Dear reader, to leave comments on the publication, you must to register.