October 27 2015
8
Nine-year-old twins Vanya and Zhora Strelnikov played war. Zhora defended the fortress - the bed. And Vanya tried to seize it. The guys were so keen on the game that they did not immediately hear the noise of cars outside the windows.


The door shook under heavy blows, the frightened boys climbed onto a bed that still seemed like a safe fortress. A few German soldiers entered the house, knocking heavily with their boots. Talking loudly to each other, they began to destroy furniture, dishes, to get clothes. One pointed to Zhora and said something loudly. Mom rushed to the boys, but she was slapped in the face.
- Fool! - Jora shouted and threw a pillow at the German.

It probably seemed to the boy that he was still in his fortress, and in his hands was not a pillow, but a heavy stone.

The German was furious even more and, continuing to shout the same word, went up to the guys, grabbed Zhora and kicked him out into the middle of the room. Another machine gun hit mom on the head. Both fell to the floor. There was a dry crash of the automatic fire, then the receding sound of footsteps, laughter, whistling of some kind of melody - and everything was quiet.

But miraculously surviving Vanka did not hear that. He stared at his mother and brother. Below them was a scarlet spot. So bright, like it was painted with oil paint.

... a year and a half has passed. Now orphaned Vanka lived with the neighbors - the women of Shura and her grandson Grishka, the same age as Vanka.

Rumbled fights at Kursk. In the small hospital of the village of Grushevka, Dolgorukovsky district, where Vanya lived, often wounded were brought. And almost every day the boy came to this hospital. He hoped that one day his father would be brought there, who had gone to the front in the first days of the war. But the father was not brought.
On one of the hot days, Vanya, as always, stood under the windows of the hospital.

The boy looked up, a thin unfamiliar woman calling out of the window. She waved her hand, inviting him in. Vanya thought that she confused him with his deceased brother. He opened the door and went inside. Here there were metal bunks close to each other, on one sat that stranger.

“And my friend Zhora was called,” said Vanka, and he buried his nose in the woman’s torn robe. After all, it seemed to him for a moment that his mother called out of the window.

... Antonina Sergeyevna Korobova was brought to the hospital right from the battlefield. She is a doctor, provided first aid to the victims and she herself came under fire. The wound was harmless, but the patient needed care and good nutrition. And what are the vitamins, when “war is outside”? Her arms and legs began to hurt, her teeth fell out - scurvy, an eternal companion of wars and famine, came to Antonina Sergeyevna.

Roly often visited his new acquaintance and was very attached to her. And she loved the boy with all her heart, so much like her lost son.
- Aunt Tonya, what is scurvy? - once asked Roly.

- The disease is such. To overcome it, lemons need to eat, oil, meat. And best of all the usual onion helps. Do not worry, Vanechka, I will recover soon.

Bow. What a short word - just three letters. But his health depends on him, and maybe even the life of his beloved boy, Aunt Tony!

Outside the village was a mined field: retreating, the Nazis left behind a "gift". None of the villagers, of course, did not go there. They waited: our troops will come, there will be miners, then they will bring order and order. Until then, let them lie. And Roly judged this: if suddenly the fascists return, they will be afraid to turn their heads into this field. So, there you can plant a precious bow.

The boy asked the woman Shura for the seeds (or maybe for someone else, I don’t know for sure). As explained the need, also not known.

And here on the field, where, like wolves in an ambush, unguarded people lay in wait for mines, a little living piece of earth turned green. Quite from the edge, tiny but green! It stretched to the sun feathers, filled with vitamins, which were so necessary to Aunt Tone and other fighters suffering from scurvy.

Every day Vanya went to his “plot” to him alone a well-known path. He devoted only Grishka to the secret, but he never took it with him. Sometimes fear, like a spider, entangled the boy’s soul with its nets. And then, walking to his "garden", he said aloud:

He spoke to the German mines, and they, although they did not understand Russian, obeyed him. And the precious onion soon grew.

Antonina Sergeevna recovered so much that she was discharged, and she again went to the front.

- The war will end, I will come here and take you to my place, to Penza, she promised to Van. - You saved my life, Roly-onion!

So it was. But in the 1944, Vanya died. He played with a puppy, who came to the house of Baba Shura. Shaggy baby ran out on the same field.
- Stop! - shouted Vanya.

And he ran after the fool to save him. Yes, apparently, I forgot to ask the mines not to explode ...

And Antonina Sergeevna remained alive. After the war, she came to Grushevka for her named son, for Vanka-Lukovitsa. But...

Instead of historical commentary

During the Great Patriotic War, scurvy for a long time followed the heels of the Russian people - both fighters and those who remained in the rear. But Soviet doctors and nurses in this difficult time made the feat - and we are talking about this and other diseases. Medicine not only threw all its strength into saving the wounded and sick (and about 76 percent of the injured and more than 90 percent of the sick returned to the system!), But also, adapting to the hardest conditions, began to produce new drugs or methods of treatment, sometimes out of nothing Here are just some facts and examples.

In the case of extensive wounds to soldiers, to prevent gangrene, ordinary cotton cloth soaked in a solution of table salt was placed on the wound. Salt absorbed the liquid, but it did not affect the red blood cells, white blood cells and living blood cells and tissues.

Sea water quite successfully replaced a portion of donor blood, which was desperately lacking. After all, the composition of sea water is very close to the composition of blood. In addition, salt helped fight the causative agents of various diseases. But, of course, this replacement was possible only if the loss of blood was small. Here it is necessary to mention the most valuable work of S.E. Severin, Head of the Department of Biochemistry, MSU, who developed a recipe for increasing the shelf life of donor blood.

A lot of work was done and struggling with diseases caused by a lack of vitamins, primarily with scurvy. Professor V.A. Engelhardt developed a method of obtaining vitamin C from unripe walnut. And even special plants were built for the manufacture of vitamin C in this way. 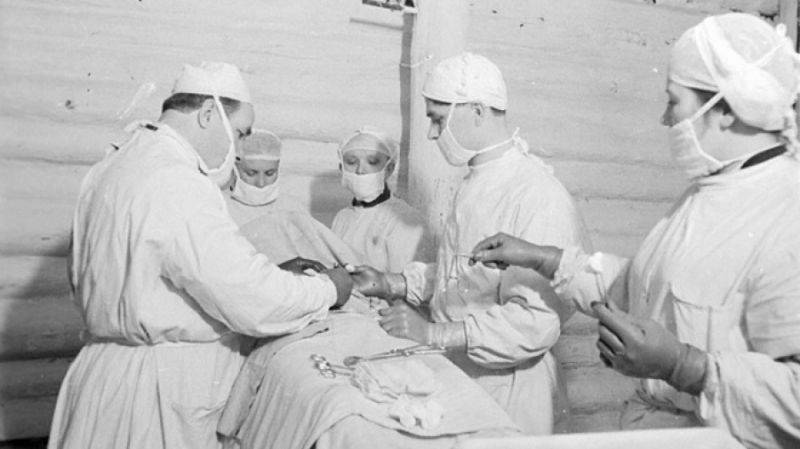 Chemists of all departments of the Leningrad Forestry Academy, even under blockade conditions, starting from 1941, coniferous extract rich in vitamin C was produced in large quantities. The infusion on pine needles was very widespread. They were first treated with scurvy. And after all, this method was developed by Leningraders, who, according to the plan of the fascists, were supposed to die out of hunger! And employees of the Vitamin Institute raised documents two centuries ago, when Russia exported needles as a cure for scurvy. Even documents about how Russians treated scurvy during the war with the Swedes were excavated in the archives. We learned how to shred needles, make extraction, filter. In general, the work of Leningrad physicians is a separate, big material ...

Tsing was treated with birch sap and kvass. Among the partisans, they say, the bike was a joke: the fascists, they say, will see how Russian soldiers are attached to birches, and they will believe that “Rus Ivan” can eat trees. Then they will understand that we are invincible ...

Almost all fruit-bearing trees and shrubs were brewed - from gooseberries and currants to apple and cherries, and in many villages these leaves were dried for the winter, crushed and, mixed with water, baked cakes.

They also made onion extracts, but, unfortunately, they could not be stored for a long time, and in dried onions, the vitamins lost their power.

... A little more than a year of war passed - and the number of patients with scurvy decreased significantly. Eh, Roly-onion! And your contribution to this is ...

We are in Yandex Zen
22 June. Brest Fortress. Battle Reconstruction
Father told
8 comments
Information
Dear reader, to leave comments on the publication, you must to register.