October 23 2015
43
The buildup of submarine forces of the Russian Navy in the Mediterranean theater of operations: planned and demonstrative


10.08-21.09 head PLB Ave 06363 B-261 Novorossiysk made an inter-fleet transition from the Barents Sea to the Black Sea. It went its course, in the surface position - through the English Channel, Gibraltar and the Bosphorus. Theoretically, the boat could be delivered to a permanent location in the transport dock on inland waterways, which would be faster and cheaper (in terms of fuel consumption and GEM resource), but far less rational from the point of view of combat training and flag demonstration. 16.10, completing the deep-sea and shooting test program, followed by the B-261 B-237 Rostov-on-Don, instead of which the Old Oskol B-262 arrived. © 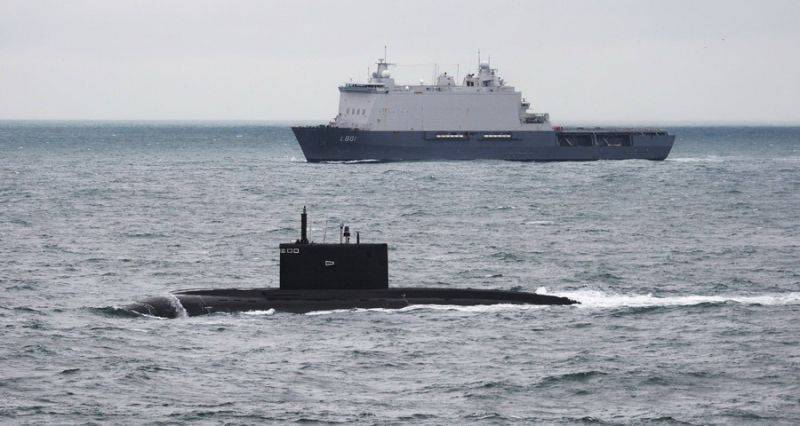 "Novorossiysk" with an escort (DVKD "Johan de Witt"), English Channel, 19.08.2015 (photo from defensie.nl from the submission of Djoker, forums.airbase.ru)
In total, six Russian submarines should proceed along the Polar-Novorossiysk route by the end of next year - without hiding, in front of representatives of almost all the nations of the European Union: Norwegians, Germans, Belgians, Dutch, British, French, Spaniards, Portuguese, Italians Greeks. Each such stage will tactfully remind our "partners" from NATO of the firm intention of the Russian Navy to control if not all of the Mediterranean Sea, then at least its eastern part (mentally "our age-old" since 5 squadron). After a raid on ISIS from the Caspian Sea, the concept of "control" gets a much broader interpretation.

As is known, the PLB of 06363 Ave. are equipped with a .6 533 mm torpedo tubes and a control system (QMS) for the Caliber-PL universal missile system. According to reports, the four TAs of the lower tier are designed for firing traditional self-guided torpedoes, and the two upper tiers are designed for shooting “exotic” weapons such as remote-controlled torpedoes and cruise missiles with an underwater launch. Thus, with three standard ammunition per device (one is charged, two are in the fast mooring device “Moray”), the total ammunition of the 3М14 XRBD can reach six units (the assumption about the use of lower TA missiles for confirmation requires confirmation). 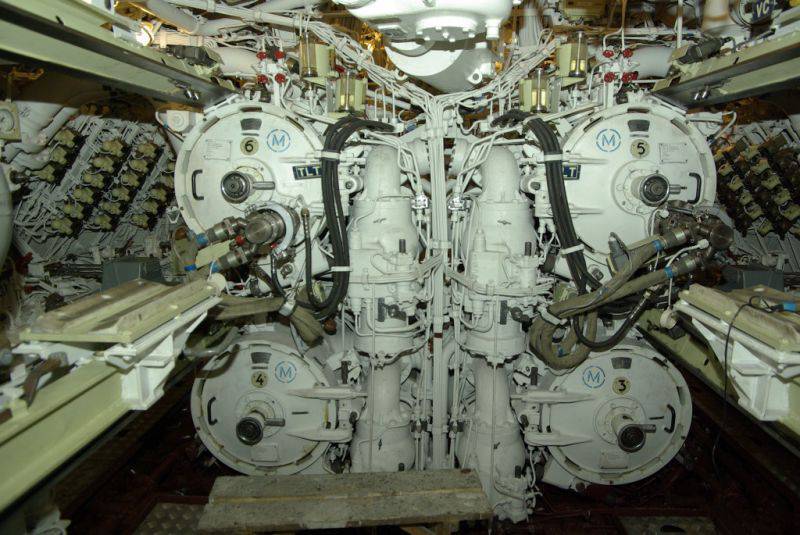 Torpedo tubes of diesel-electric submarines of 636 Ave: both upper and two middle lower ones are visible (photo of the Rubin Central Design Bureau from the submission of militaryrussia.ru)
With a staff number of 4 RPFs of the Black Sea Fleet of 6-7 units (excluding and including "Alrosa"), at least four (two-thirds) of the submarines capable of taking 24 3M14 can be used to launch missiles at coastal targets in the Mediterranean basin - almost as much as was released by the Caspian ships flotilla (26). At the same time, carriers can be deployed in advance and covertly at a fairly arbitrary launch point within a radius of 1500 km from the target and be in position awaiting a command to use weapons for a very long time (within 45 days of design autonomy). ©

The submarine cruising range in 400 miles (5,5 days of motion with a virtually silent three-node route) suggests that a day after the dive, the area of ​​the possible location of the boat will be 16 000 square miles, in two - 65 000, after three - about 150 000 square. miles (if the boat operates, say, in the region of the Greek archipelago with its countless islands and straits, attempts to find it there will be akin to searching for a needle in a haystack). As for the lack of vertical start installations and the need to “twist the shutter” twice, this disadvantage is compensated, on the one hand, by a fast-loading device, on the other, by the non-critical volley time if the enemy does not have effective PLO weapons (there is a suspicion that there are no funds even in the arsenals of the NATO countries, not to mention the gangs of the Middle East and North Africa).

Summary. It cannot be said that it was quite unexpected, but it turned out that small (2300 and overhead) diesel-electric submarines of the near-sea zone became strategic rocket carriers capable of influencing the development of events in certain remote regions of the world. As the fleet is replenished by seaworthy surface ships with USK and nuclear boats with the Kalibrom-PL (newly built and modernized), the zone of influence of the Navy as a tool of the foreign policy of the Russian Federation will steadily expand and become global over time. ■

PS 2890 miles, separating Polar and Ceuta, Novorossiysk passed for 16 days at an average speed of 7,5 ties (average non-stop), which suggests that the boat went its course, despite the message "military-diplomatic" source about towing B- 261 in order to save service life (link). The towing speed, as a rule, does not exceed 5 knots, which is aggravated by the hydrodynamics of the PLN of the 877 / 636 family, which is far from optimal for a surface movement, and the tugs that took part in the crossing, most likely, accompanied the PL ,. that is, they performed a safety net function, as they do in all long-distance campaigns of warship detachments.

With a similar mode of movement and in the absence of force majeure "Rostov-on-Don" must enter the English Channel this coming Sunday (25.10) and arrive in Novorossiysk in late November - early December (according to the press service of the Ministry of Defense, in the first decade - link 2). The main intrigue of the transition, according to the author of the blog, is the presence of long-range cruise missiles onboard the B-237 and the possibility of their combat use "along the way" at NBMB over targets in Syria. Given that the head B-261, which in this regard were hopes ,. inter-stand repairs in the Sevmorzavod and passes into the sea only after 01.12 (at the base station - in April-May, link 3), the probability of the first combat underwater launch (salvo) 3М14 from the board is Rostov-on-Don. miss the opportunity to test the "Caliber PL" in combat conditions of the Defense Ministry and the defense industry simply do not have the right). © 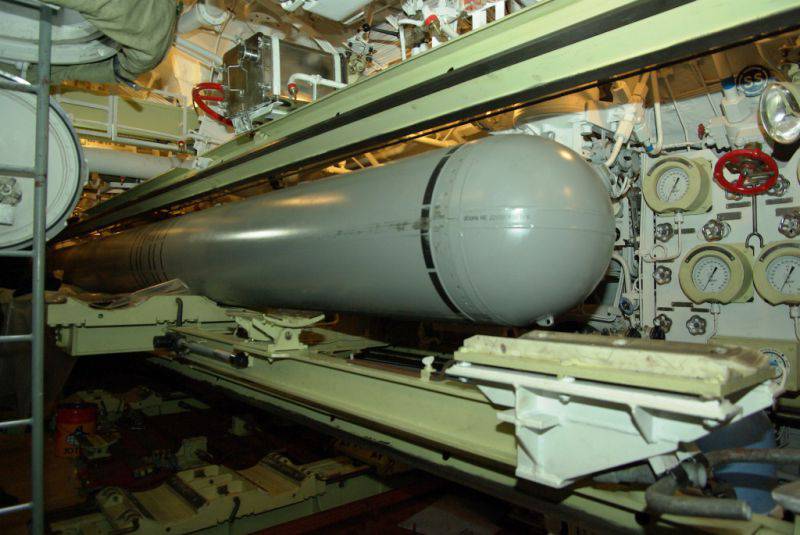 KR Club-S complex (in the starting capsule) in the torpedo compartment of the diesel-electric submarines at 636 Ave. (photo from the Rubin Central Design Bureau website via militaryrussia.ru) 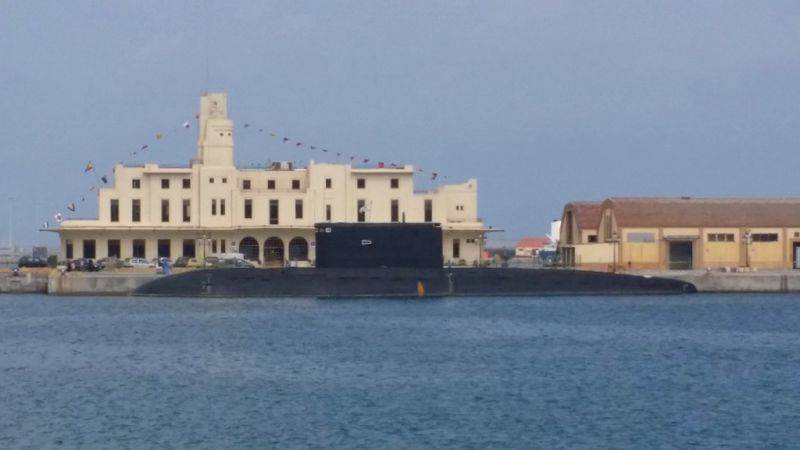 Novorossiysk in the Mediterranean, Ceuta (Spain), 26.08.2015 (photo from laverdaddeceuta.com via sam7, forums.airbase.ru)

We are in Yandex Zen
What will increase sea power
43 comments
Information
Dear reader, to leave comments on the publication, you must to register.