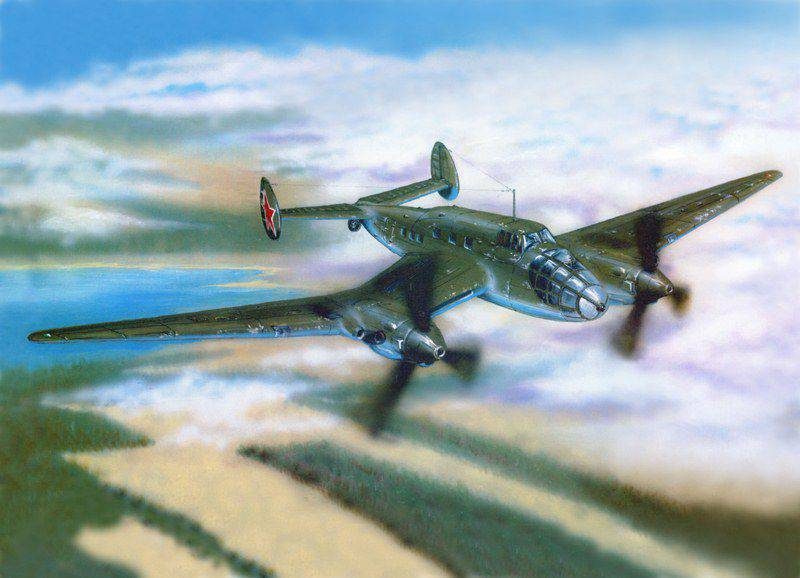 When Robert Ludvigovich Bartini laid the project for his high-speed passenger aircraft, “Steel-7”, he did not expect that a successful long-range bomber would come out of this car. And he certainly could not even imagine that I.V. Stalin will wish to have such a “personal” aircraft for their flights.

In the second half of the thirties, the talented aircraft designer Bartini was in his prime. He had just created an original aircraft — a high-speed single “Steel-6”, the most high-speed aircraft in the Soviet Union at that time. He was shown to Marshal M.N. Tukhachevsky and received high approval and support.

Robert Ludvigovich enjoyed enormous prestige not only among aviation specialists, but also among party members. What was worth, for example, one of his bright deeds, when he listed all his legacy in favor of MOPR, inherited from his father, Secretary of State of the Italian Kingdom, Baron Louis Oros de Bartini. Over a million dollars! The decision did not change even the request of Elizaveta Napoleon’s wife to leave part of the inheritance for herself. Bartini replied: “I myself was a revolutionary in Italy. I know: the revolution fighters need this money. ” However, someone scribbled a denunciation of Bartini, and in the winter of 1938, he was arrested.

When Robert Ludvigovich was already in prison, on the plane “Steel-7” the pilot N. Shebanov set the world speed record. This forced to pay attention to the car of the military. The factory arrived unexpectedly K.E. Voroshilov. He was shown the plane, informed about his flight technical qualities. And soon a meeting of the Politburo was held, at which they considered the question of redesigning the passenger aircraft "Steel-7" into a bomber.

After the arrest of Bartini, the design bureau was left without a manager for a long time. But someone needed to report “upward” on the progress of work. As a result, the choice fell on the 28-year-old designer Vladimir Grigoryevich Ermolaev. He was distinguished by high technical literacy, was energetic and intelligent. Ermolaev graduated with honors from the Physics Department of Moscow State University. He was friends with S.P. Korolev, P.V. Dementiev (future Minister aviation industry), other people (who later became famous).

In the Kremlin, Yermolayev briefly reported on the characteristics that the future bomber will have, converted from the Stal-7 aircraft. Stalin asked a few questions about the range and bomb load. After the report, V. G. Ermolaev was appointed chief designer of the aircraft. On the second day, he assembled a team of design bureaus and said: “Comrades, we need a minimum of reasonable aircraft rework. And most importantly, it is necessary to preserve everything that was talented that Robert Ludwigovich laid. Especially aerodynamic forms. "

The designers, who received very short deadlines for development, worked without days off. Periodically, for consultation brought Robert Ludwigovich. The car rolled out on the airfield on time. The tests were successful. In the test test flight, the bomber dropped a conditional bomb in the Omsk region and returned to Moscow.

Before the war, the Voronezh plant had time to start producing bomber. The plane was given the name Ermolaeva - Er-2. In terms of flight performance, the car was one of the best long-range bombers of the war. Several aviation regiments were formed from the EP-2, which took part in the bombing of Berlin, Königsberg, Stettin and other cities. For the creation of the bomber VG Yermolaev was awarded the Order of Suvorov and received the rank of major general of aviation.

During the war, F. Roosevelt, W. Churchill, Charles de Gaulle used high-altitude bombers for their flights. At the same time, a long stay at high altitude, in the cramped conditions of the cabins of combat vehicles, was tedious, especially for overweight Churchill. But the realization that the machine is reliably protected by the gunners of the highest class reconciled with the inconvenience. In the Soviet Union, long-range bombers were also used to deliver high-ranking executives. For example, V.M. Molotov flew to the United States on a heavy four-engined Pe 8 bomber to meet with President Franklin Roosevelt. The flight took more than 12 hours and took place mostly in northern latitudes, where the probability of meeting with German fighters was minimal.

It is not known how many times Stalin flew on airplanes. Only one flight is known for certain when the leader needed to get to the Tehran conference in 1943 for a meeting with F. Roosevelt, W. Churchill and Charles de Gaulle. For the flight, the usual and reliable passenger Li-2 was chosen. Naturally, the aircraft was carefully prepared for Stalin, and the selected flight personnel of the Special Purpose Division were allocated. Her pilots were able to fly superbly in difficult conditions, with no visibility at all. The route lay over the snow-covered Volga and steppe areas, went to the Caspian Sea, which ensured relative safety in case of a forced landing. Throughout the flight, the aircraft was accompanied by a reinforced escort of fighters.

Towards the end of the war, international meetings at the level of heads of government were increasingly held. F. Roosevelt, Winston Churchill, Charles de Gaulle traveled by airplanes to the conference. Stalin arrived in Yalta and Potsdam by train. It was safer, but time consuming. And the usual Li-2 no longer met the new requirements for speed, range and comfort of flight. And then there was a decision to create a special aircraft for diplomatic flights. The development was entrusted to the design office, headed by V. G. Ermolaev. A new car was developed under the cipher of a special purpose aircraft.

Yermolayev made a decision to make a new car based on the spent in production bomber Er-2 to speed up the work. In addition, he had at that time and the best data among long-range aircraft. Its highly economical diesel engines were economical and worked on more fireproof heavy fuel. Defensive armament was removed from the passenger car, the lantern of the pilot's cabin was extended, behind which a large gargrot was mounted, which increased the height of the fuselage. By eliminating the bomb bay and fuselage tanks, a ten-passenger cabin was equipped. When designing the aircraft, designers paid particular attention to the comfort of the passenger compartment, its interior, and the convenience of communication between passengers during the flight. The salon had good heat and sound insulation, a special passage for workouts, a toilet, inlet and exhaust ventilation. Heating of the cabin was carried out from special heaters mounted in the engine nacelles. In case of emergency depressurization, each passenger seat was equipped with an individual oxygen device. In the cabin with enhanced amenities could accommodate nine people. The crew of the aircraft increased, it included: the commander, the co-pilot, the navigator, the radio operator and two flight attendants. The design of the cabin was worked out on special layouts and passed acceptance by the commission. The modified aircraft received the name Er-XNUMHON (where "OH" meant "special purpose"). The plane was planned to release a small series at the Irkutsk aircraft factory. However, the events that took place soon strongly influenced his further fate. 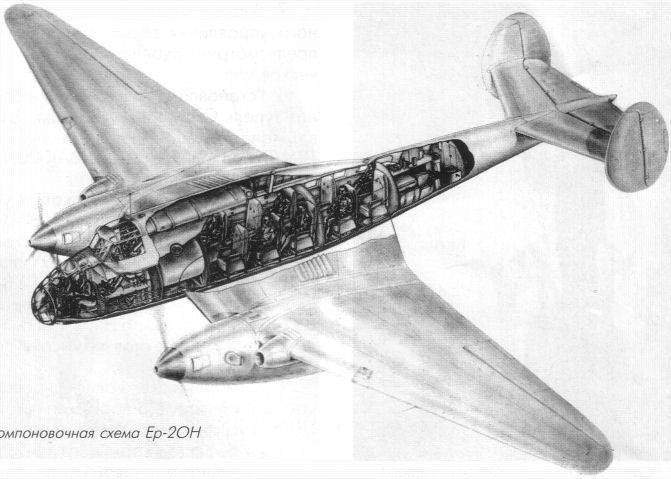 Vladimir Grigorievich was in the full bloom of his talent. Life seemed to be smiling at him. He finished the plane for Stalin, proceeded in parallel with S.V. Ilyushin to the design of a passenger aircraft (this direction later embodied in the famous IL-12). In Irkutsk, a series of Er-4 bombers with diesel engines designed by A. Charomsky was in progress. All promised a thirty-four-year-old aircraft designer a bright future.

In December, 1944, Yermolaev went on a business trip to the Irkutsk plant to monitor the construction of a special-purpose aircraft. Getting off the train, he felt a strong fever and malaise. The thriving disease turned out to be a severe form of typhus. A few hours before the new year, Yermolaev was gone.

After the death of Vladimir Grigorievich OKB-134 for some time headed by M.V. Orlov. However, already in February, the 1945 OKB Ermolaev was transferred to the Sukhoi OKB (OKB-289), and further work on the topic was continued under the guidance of Pavel Osipovich Sukhoi.

16 April 1945 one of the passenger cars flew from Irkutsk to Moscow to the test base of the OKB. This non-stop flight over a distance of 4540 km was completed in 15 hours 30 minutes. In the cabin instead of the passengers placed half a ton of cargo. After landing, the remaining fuel in the tanks was 500 liters. The average flight speed was 312 km / h, while the head wind on the route was about 40 km / h. A week later, a second copy flew to Moscow. Both cars passed factory tests, during which the flight speed in 435 km / h was achieved. The range was 5200 km. The flight could take place at an altitude of 6000 meters. The mass of the car was about 18 tons. It remained only to bring to the required resource of its diesel engines. However, the OKB P.O. Sukhoi, had his own work on the subject of extermination, and was not at all interested in fine-tuning the machines inherited. The new "owner" sought, first of all, to realize his ideas and creative ideas. Gradually, the work was abandoned.

It should be noted that the Ep-XNUMHON possessed a long range and high cruising speed. However, despite these advantages, this aircraft was never claimed. Show Aeroflot and the military more interest, and the Sukhoi Design Bureau, of course, would react to the car with great enthusiasm. The lack of reliability and the ACh-2B engine resource that was too small for a civilian car affected the fate of the aircraft. The second disadvantage was the low take-off and landing characteristics. Er-XNUMHON demanded long runways, which were not on the vast majority of civilian airfields.

After the end of the war, the requirements for an aircraft intended for the transport of VIPs also changed. The first place was the comfort of the car, which was almost impossible to achieve on an airplane obtained by reworking a combat vehicle. For example, the height of the cabin of the EP-2ON did not exceed the 1,6 meter. Thus, the passenger "Ermolaev" somewhat late with his birth.

A serious drawback was the lack of anti-icing system. It is worth saying that an attempt to order something similar from Goodrich was made. But the Americans, agreeing to create it, requested such information about the Soviet aircraft, which at that time our relevant authorities considered secret. On this work and ended.

Well, the first head of the design bureau, Robert Bartini, was completely rehabilitated in 1954. Once free, he continued to search tirelessly for ways to improve the aircraft and created several original aircraft. 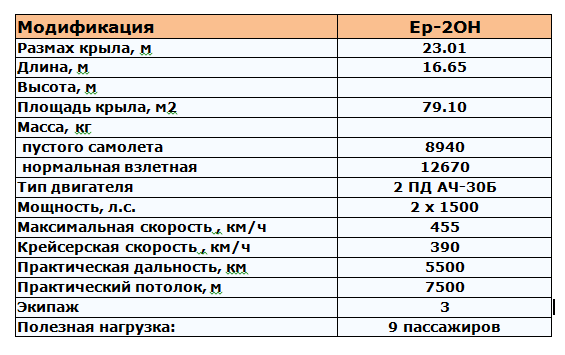 We are in Yandex Zen
An-12 in Afghanistan
SR-71 Blackbird: the fastest aircraft in the world
20 comments
Information
Dear reader, to leave comments on the publication, you must to register.