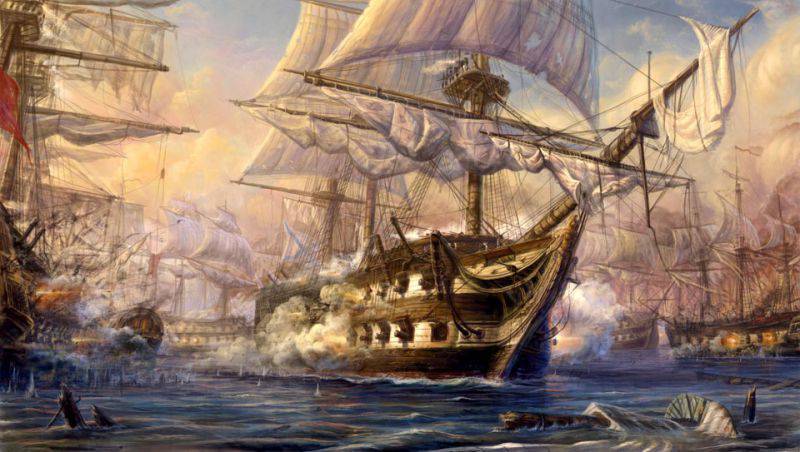 Today, October 20, marks the anniversary of the naval battle in Navarinskaya Bay, in honor of which Pavel Chichikov, as you know, ordered himself a coat-colored "Navarinsky smoke with flame." In this last major coalition battle of the sail epoch, the combined fleet of Christian states in the Russian, English and French squadrons once again defeated and destroyed the fleet of the "Shiny Ports".

It is curious that after 26 years after Navarin, the British and French fought on the side of Turkey against Russia, however, the Russian fleet could not be drowned because ours outwitted them and flooded it themselves. The Turks did not think of such a military trick, and as a result, they lost not only the ships, but also their crews, and then their opponents recorded another victory for themselves.

Apparently, the future Sevastopol admirals Nakhimov, Kornilov and Istomin, still in the ranks of lieutenant, midshipman and midshipman, participated in the Navarin battle, remembered her well and made the correct conclusion from the mistake of the Turkish naval commander Ibrahim Pasha, due to self-confidence and overestimation of her forces.

But the Ottomans did not make a correct withdrawal, so the next battle of the Russian and Turkish fleets at Sinop was almost an exact copy of Navarin, only on a greatly reduced scale. The Turks were trapped in the bay and, despite the opposition of the coastal batteries, were methodically shot. But for them it was already commonplace. 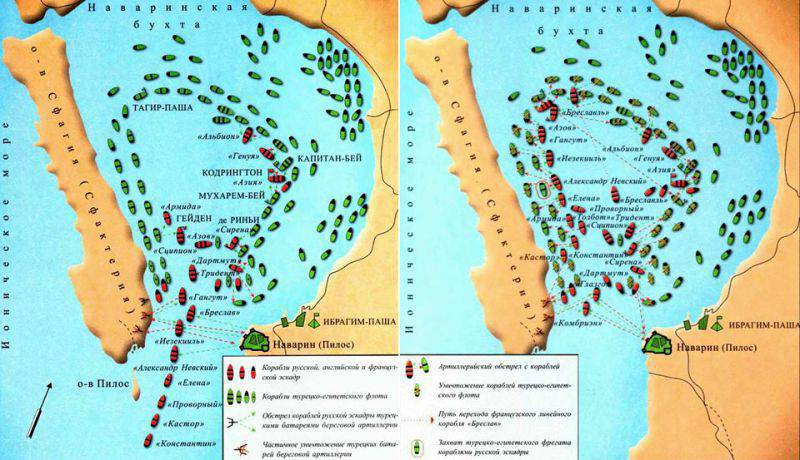 The scheme of the initial and final phases of the Battle of Navarino. With the enormous numerical superiority of the Turks (78 warships against twenty-two), the Allies had a decisive advantage in battleships (ten against three). This, as well as the higher proficiency of Russian, English and French sailors, decided the outcome of the case. The Turks lost from 60 to 70 ships exploded, burned, sunk or washed onto the shore, and their opponents - not one. 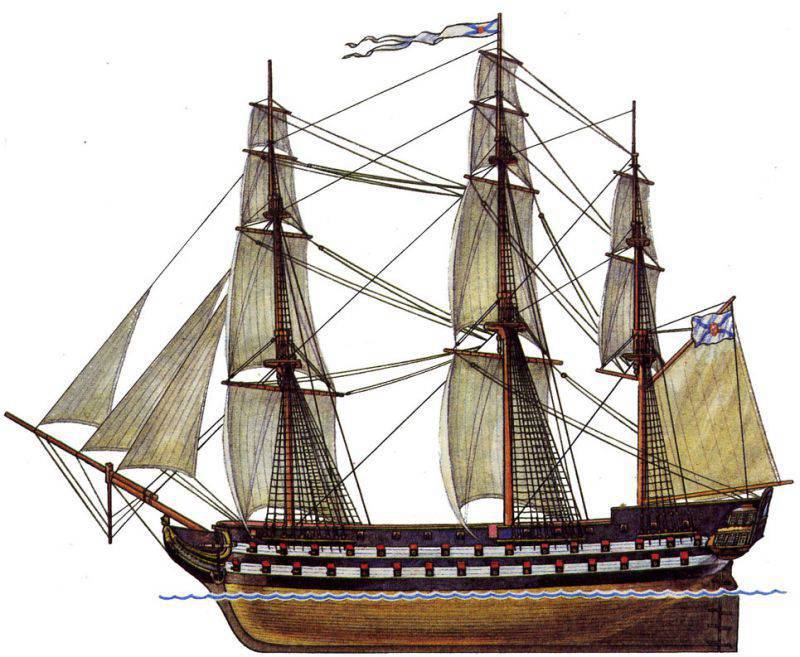 The flagship of the Russian squadron is the 74-gun battleship "Azov".

Damage to the nose of the "Azov", received in the battle of Navarino. The battle was fought at the "pistol" distances, so there was virtually no blunders. The ship withstood 153 (according to other data - 164) Turkish cores, including seven - in the underwater part. On the "Azov" 24 killed the sailor, which amounted to almost half of the casualties of our fleet. Replaced during repair fragments obshchivki gray. The battleship itself drowned five Turkish ships, including the flagship battleship Ibrahim Pasha. 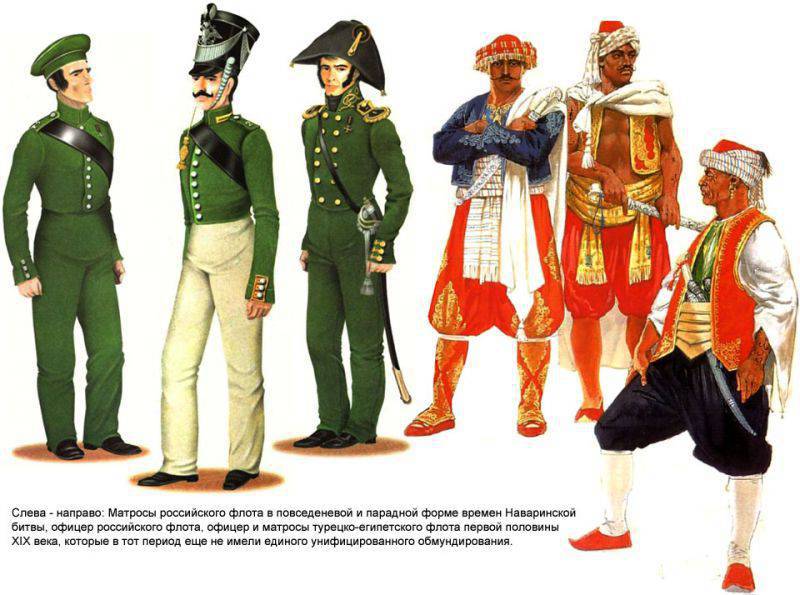 Shipboard artillery and ammunition used in the Battle of Navarino: a bronze cannon on the marshall of the Marshall system, cast-iron carronade and anti-flight chain cores. 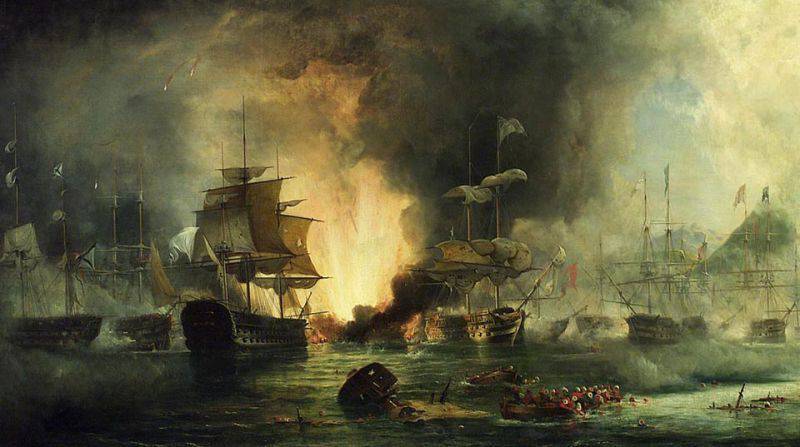 Navarin battle in the picture of the English artist George Philip Reynagla. 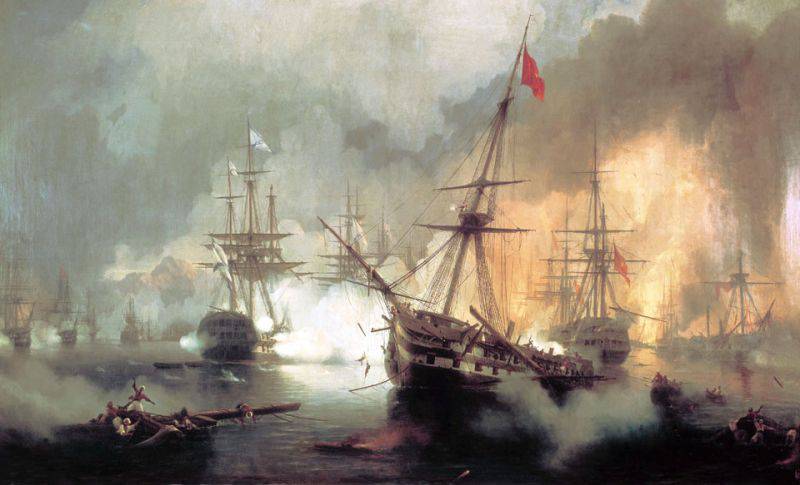 It is the same in the picture by Aivazovsky. 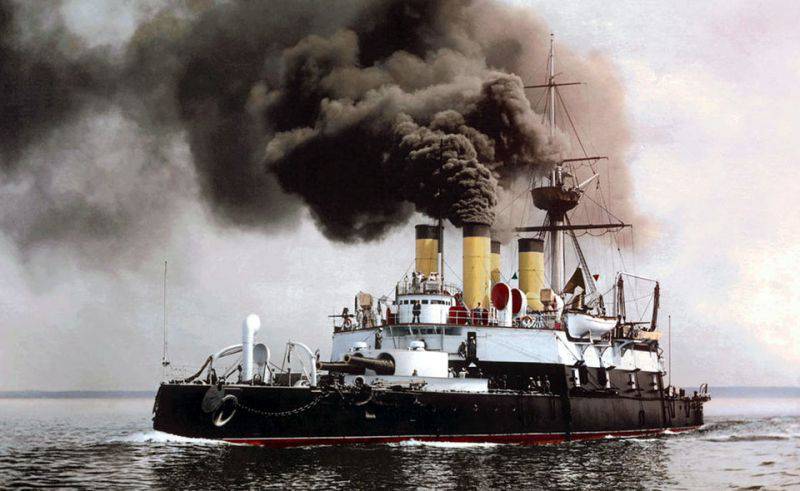 Well, as a bonus - the Russian squadron battleship Navarin. It is easy to guess, he received the name in honor of the victory in the Battle of Navarino.

Ctrl Enter
Noticed a mistake Highlight text and press. Ctrl + Enter
We are
Won the battle of a lost war - Lepanto 1571From "Navarin" to "Borodino"
10 comments
Information
Dear reader, to leave comments on the publication, you must to register.