Fifty shades of election. Ukrainian politics without rules and bills

October 23 2015
24
What is an election without a choice? How to falsify fraud? Why is victory a defeat? No, this is not a dystopia. This is a look behind the scenes of Ukrainian politics.


The ghost of the election walks on almost-Europe

Ukraine is again entering the zone of political turbulence. In just a few days, the country is awaiting local elections, which provide all sorts of parties and candidates with a unique chance to realize their ambitions. The battles of Ukrainian politicians promise to be no less exciting than the gladiator battles of ancient Rome.

While the arena is being cleared of political corpses, and new fighters are preparing to rejoice the excited public, let's take a closer look at the scenery.

Local, but not quite

The already difficult situation - and there are no others in Ukraine - is aggravated by rumors that the constitutional reform will soon be adopted, which implies a significant redistribution of powers in favor of the regions. Thus, a political force that gains control over a large number of areas automatically gains power throughout the country.

A tempting prospect, isn't it?

I think all interested parties will give a positive answer. At least their actions confirm this theory.
Poroshenko’s party is expectedly seeking to strengthen its position, using its advanced agitation apparatus and inexhaustible administrative resource in its entirety, without disdaining, however, with gray schemes.

Revanchist forces, on the contrary, are trying, as far as possible, to deprive the BPP of influence in the regions and in parallel to take there as much power as they can carry. It is worth noting that the methods of the opposition also do not differ crystal clear and honesty.

The opinion of the electorate, perhaps, is the last thing that concerns the candidates for people's deputies. In general, in Ukraine, the voice of the people has never been a decisive factor. At best, it is a convenient tool for political battles.

Political career is worth it to not skimp on the money. Obviously, it is precisely this formula that combatants adhere to on both sides of the barricades. The only difference between them is that some try to at least formally remain within the framework of existing legislation, limiting themselves to frantic populism and naked slander, while others directly violate the law, either finally believing in their own omnipotence, or believing that there is nothing to lose.

Oleg Lyashko’s radicalism, for example, was enough only for toothless, by Ukrainian standards, statements that local elections would be “the dirtiest in stories Of Ukraine. "

Boris Filatov, representing the opposition party “Dill” also limited himself to a reminder that in Ukraine there are notorious administrative resources and government pressure on election commissions to feel quite well.

Only the party in power seemed to show some sharp wits, issuing ballots elegantly resembling the ordinary Ukrainians to vote for. 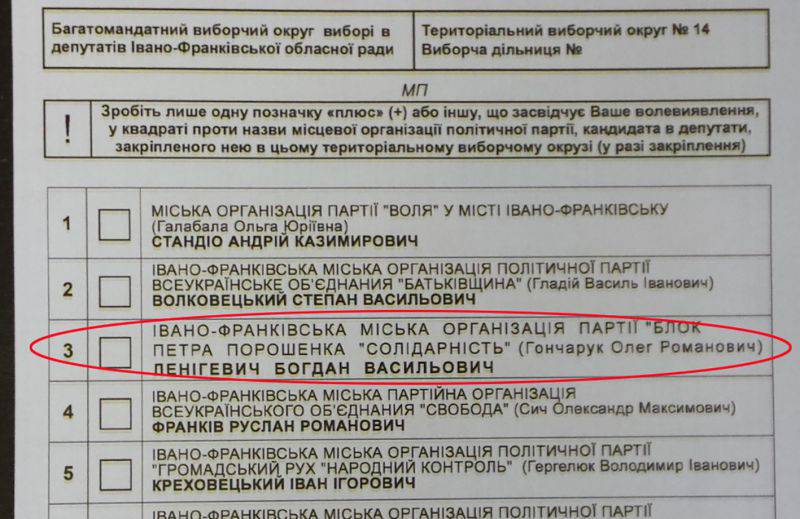 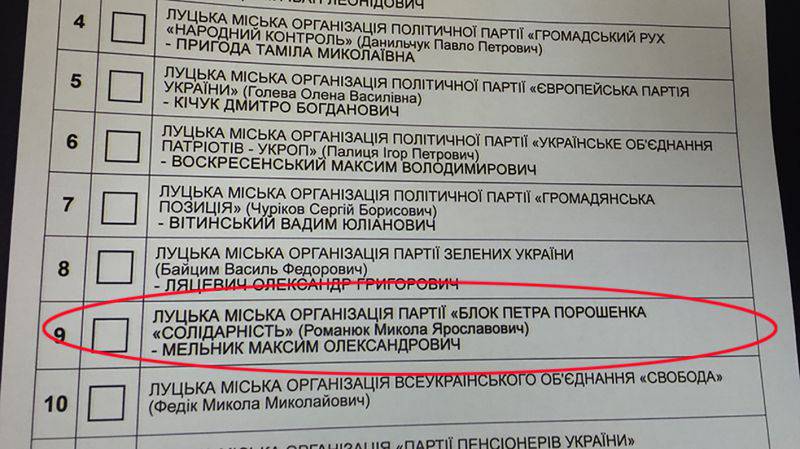 Is there intrigue? And if you find?

Making a prediction, it would be naive to believe that in these elections the opposition parties will achieve success with serious success. They have no more chances against Poroshenko’s team at the moment than winning the local elections in North Korea.

At first glance it seems that intrigue does not exist. Everything is predetermined, BPP will win and life will continue in the same vein ... So, probably, it would have happened in any other country. But not in Ukraine.

It is not a secret for anyone that in Ukraine there are two ways to change power - utopian and realistic. In a utopian version, a popularly elected president comes to power through democratic, open elections. In the harsh Ukrainian reality, the head of state is appointed by special people in a specially designated place after the coup d'état.

With this in mind, it’s quite logical to assume that information about the “fake ballots” was thrown by Poroshenko’s opponents themselves.

Realizing that at the moment nothing shines for them, the revenge-seekers simply banish the degree of public discontent with the current president. When the people reach the desired condition, you can display Maidan.

Efforts in this direction can be traced quite clearly. A vivid example is the network recently laid out, shooting from a drone Poroshenko’s residence, more reminiscent of Versailles.

Interest in the election definitely remains. It’s just that it is in a slightly different plane than the October voting results.

It is very difficult to look towards Ukraine, based on Russian realities. Like Chelyuskin in the ice, this country is stuck in the 90's. And to consider the political process in it correctly solely from these positions.

What interests you is not who will win the elections, but how and when the “Poroshenko’s tyrant” will be “swept away by a wave of popular anger”.
Having chosen the correct viewing angle, we have to ask ourselves a completely different question. Who will get the maximum benefit from the fall of the "chocolate dictator" from his throne?

We are in Yandex Zen
A great interview with Sergey Lavrov: about Ukraine, Obama and Iran
What you didn't want to know about England
24 comments
Information
Dear reader, to leave comments on the publication, you must to register.