October 26 2015
60
Something is wrong in the German kingdom. Chancellor Angela Merkel, who wants to shelter and feed a huge number of migrants, reminds the Germans of the central idea of ​​the European Union - openness and going beyond the narrow national feelings. However, the Germans, observing the endless streams of those who share the "idea of ​​the EU", do not understand Angel. Express more precisely: the angel has ceased to understand the electorate. Analysts believe that Germans need stability and security more than “exemplary” Germany, the next concept of the European brotherhood of nations. 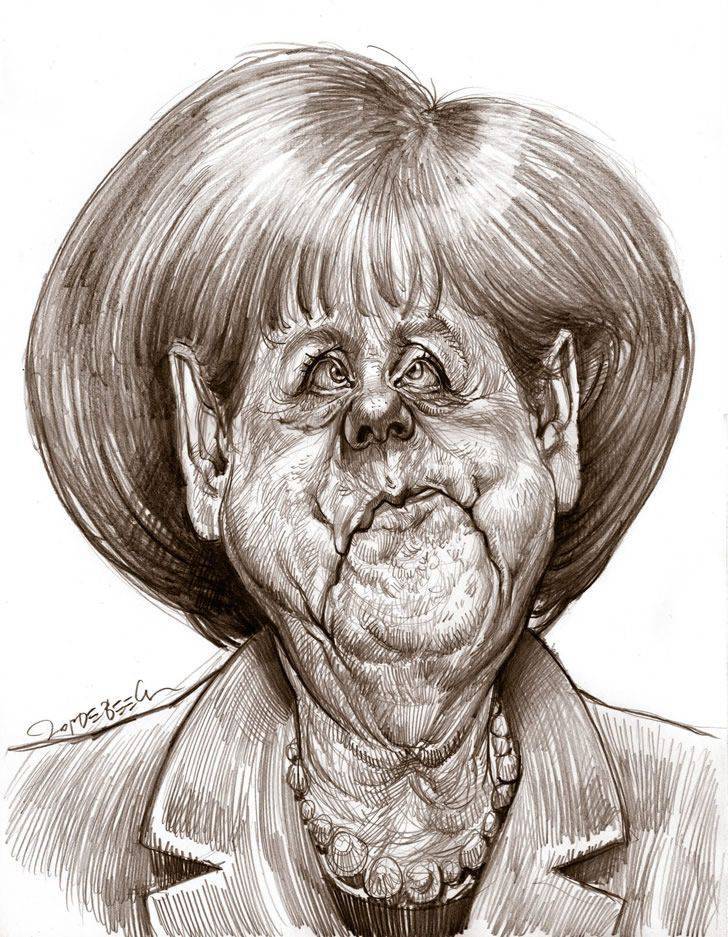 American columnist John Vinokur (John Vinocur) in an article for "The Wall Street Journal" tried to evaluate the "altruism" of Angela Merkel.

For about a month, Angela Merkel was considered as a potential candidate for the Nobel Peace Prize (“for altruism”). In one radio program, Angela told how she represents Germany’s reception of an infinite number of refugees. “I have the same opinion as Cardinal Marx,” she said, referring to Reinhard Marx from Munich. He believes that such a test is prepared by the Lord of Germany.

Mocking at Merkel’s political failure, the journalist writes that in the editorial offices of Der Spiegel and the Frankfurter Allgemeine Zeitung she is known not only as Frau Merkel, but also as Mother Teresa and St. John (in French Jeanne d'Arc). Also this lady became famous for her arrogance. It seems that she behaves as if her policy has nothing to do with the confrontation in the Middle East.

In fact, just Germany, which is the “main player” in Europe (and the Chancellor has been in power for 10 years), failed to stop the disintegration of Syria and the refugee crisis. The observer is sure that Merkel miscalculated everywhere: in matters of Damascus, and in Kiev. Both before and after the intervention of Vladimir Putin she did everything wrong.

Bottom line: Frau Merkel is about to be at the broken trough. She is threatened with loss of not only prestige, but also power, the journalist is sure. After all, the entire 32% of Germans, according to the latest poll, was approved by Merkel’s persistence on the mass reception of Syrian and Iraqi Muslims.

В "The World Post" An article by Alex Gorlach was published in which it is noted that the policy of Angela Merkel in Germany ran into incomprehension.

A. Gorlach is the founder and publisher of European Magazine, a senior adviser to the Berggruen Institute.

The expert believes that Europe is moving to the right. But so far, Germany has been the country whose population showed the most stable resistance to extremist ideas. German right-wing parties did not show high results in the elections, like their counterparts in France, Holland, Denmark, and now in Switzerland. After all, nationalism and "racial fanaticism" once led both Germany and the entire continent to ruin.

But now "it's over": Germany "is in turmoil." According to political observers, since the beginning of September, 2015, Merkel’s attempts “with a sin in half” to lead the country through the current crisis promise the Germans continuous trouble. There is no hint of peace and tranquility in Germany.

The German Chancellor stands guard over the high goal of the European Union: “overcoming national sentiments” is “a distinguishing feature of modern man.” Angela Merkel believes that receiving refugees from war-ravaged states has become a challenge for the European continent. It seems that Angela thinks that Germany is able to show how this problem can be solved, and at the same time to demonstrate Europe’s commitment to ideals - they say, the community, which assumed the obligation to protect human and citizen’s rights, jointly and severally. The European citizen will be a citizen of the world - this is the universal value of the new global ethics.

Will it be? What will these “good intentions” bring to Europe?

Many people in Germany still agree with the chancellor. They are confident that refugees should be accepted for the first time and help them. However, we need to look at the question more broadly: the national project of which the EU dreamed, is already buried in the current state squabbles and mistrust characteristic of EU members. The introduction of border control is only the most obvious symptom of a disease, the cause of which lies much deeper.

The German Chancellor now has almost nothing to rely on. She has already entered into a confrontation with her electorate and even with party colleagues. According to the expert, in the near future she will have to resign.

As her recent “hasty” visit to Turkey showed (she offered Turkey assistance in resuming negotiations on this country's accession to the EU in exchange for the refugees remaining in Turkish territory), Merkel now depends on the goodwill of President Recep Tayyip Erdogan. What kind of person is this? This “Islamist” is now “drawing his country into civil war, because he did not get an absolute majority in the last election,” the expert reminds.

The Chancellor continues to reiterate the integration of millions of people from different cultures around the world in Europe. In her opinion, nationalism, which divided the continents over the centuries, can be overcome. The chancellor’s dream is to demonstrate that Euro values ​​are in fact universal.

Angela Merkel got under the fire of public criticism in Germany because of one slip. She made a crucial mistake on a popular talk show, “specifying the line of her government.” According to her, a state that is not able to define its borders and protect them is a “failed state.” The statements of the Chancellor were interpreted as the "surrender" of the Federal Republic of Germany.

Such an assessment shocked the German conservatives. “Chancellorship Merkel is hanging by a thread,” the expert believes.

The number of Germans who believe that the Merkel government is able to cope with the flow of illegal immigrants has noticeably decreased. In October, only every third German is ready to believe that the authorities control the situation. In September, such optimists were 43%.

More than two thirds of Germans do not agree with Angela Merkel’s policies regarding migrants. The number of German citizens who believe that the number of refugees is excessive has also grown (56% of respondents). In mid-September, the corresponding figure was no more than 30%.

Finally, the survey showed that only one in five Germans believes that Germany can continue to accept refugees.

Thus, the conclusion suggests itself: Chancellor Angela Merkel is losing popularity in her eyes. It seems that the Germans do not want to feed strangers, who for Angels are the personification of the “European dream”.

We are in Yandex Zen
"Trouble" of the Promised Land. African immigration to Israel
What to do with the refugees? Eastern Europe to host thousands of Africans and Asians
60 comments
Information
Dear reader, to leave comments on the publication, you must to register.