The revolution in German: "February" and "October" in "one bottle" 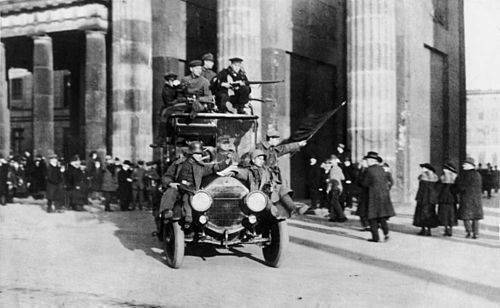 Interestingly, in the 1918 year of Germany, a revolution took place, very similar to the February-October events of the 1917 year in Russia.

There, too, the monarchy fell, there were also their communists.

In the spring of 1918, Germany launched a powerful offensive on the Western Front. It was an act of despair with ghostly chances of success. At the cost of colossal sacrifices, the Germans advanced a few tens of kilometers, but could not take Paris. Germany almost completely scooped up its mobilization potential, hunger reigned in the country, the number of strikes increased.

Against this background, in August 1918, the Entente troops launched a counter-offensive, and scored a number of major victories. Even the most hardened militarists in the German leadership realized that it was impossible to win a war, and all that remained was to fight for at least some tolerable conditions of a subsequent peace treaty.

Under these conditions, Kaiser Wilhelm appointed Prince Maximilian of Baden, head of government. The prince during the war engaged in diplomatic work and had serious connections.

Soon, the German government appealed to US President Wilson with a request for mediation and armistice. Active diplomatic consultations began, but hostilities continued, and the Entente armies continued their successful offensive. Then in Germany they finally decided to slam the door loudly: to give a decisive battle to the English the fleet.

The idea was to gather all the strength to go out to sea, to hit the British and lure them into a trap, moving them to a group of submarines. The English fleet had an overwhelming numerical advantage, and the operation itself was pure adventure. In fact, the German sailors were turned into kamikazes, and they disagreed with this role.

October 28 on the battleship "Markgraf" riot broke out. The example of the Markgraf team was followed by many other sailors who openly sabotaged the orders of their superiors. Here and there even appeared red flags. The authorities responded with mass arrests, but the unrest did not subside. On the contrary, they went on increasing.

On November 3, sailors staged a rally in the city of Kiel, joined by local garrison soldiers and workers. The gathered crowd moved towards the prison, demanding the release of those arrested. In this situation, a detachment of naval officers fired on the protesters, killing several people. After that, the sailors and soldiers began to create Soviets, that is, their own authorities.

Soon the Kiel Council put forward a slogan in which it was demanded to change the state system. Shares of disobedience quickly began to spread to other cities. The garrison of the city of Lübeck joined the rebellion, workers on strike in the Hamburg shipyards went on strike, on November 6 the sailors occupied the House of Trade Unions (a striking coincidence with the Ukrainian Maidan!)

In Brunsbüttel, teams of four ships immediately rebelled, in Wilhelmshaven, the rebels became masters of the situation and released prisoners from prisons, the workers of the Bremen shipyards stopped working. The south of the country was also in the grip of the rally element. On November 7 in Munich, a crowd of demonstrators came out under anti-monarchist slogans, and the very next day the Council of Workers, Soldiers and Peasants proclaimed Bavaria a republic.

Much of the major cities of Germany was in turmoil, and the war, meanwhile, continued, and bargaining continued regarding the conditions for the cessation of hostilities. It is clear that the disorganization of the German rear only undermined the negotiating position of Berlin.

November 7, that is, on the anniversary of the October Revolution in Russia, members of the German government, representing the Social Democratic forces, put forward the demand for the abdication of the Kaiser. The next day, Max Badensky called the headquarters, where William was, and recommended him to relinquish the throne.

Do you have a feeling of deja vu? Personally, I have the complete impression that this is not toppled by Wilhelm, but by Nicholas II. Kaiser tried to rely on military force, but the generals warned him that the army would not follow him, and even the guards division guarding the headquarters was "unreliable." Meanwhile, in Berlin, many thousands of people moved towards the imperial office, the palace and the Reichstag. Parts of the Berlin garrison, guards and the Jaeger battalion joined the insurgency. The police did not resist, and the rebels easily occupied the post office, the news agency, and the police bureau.

In all these actions, of course, organization was felt. But the rebels have not yet received the main thing - the abdication of William. And then Max Badensky went to a direct deception. He issued a statement that the Kaiser had denied himself, announced the preparation of elections to the “Constituent German National Assembly” and appointed the Chancellor of the Social Democrat as Reich Chancellor. Ebert immediately suggested that Max Badensky become a regent.

Let's stop and try to understand the background of events. We have several key points, carefully littered with all kinds of camouflage, but still noticeable. What we have?

The riots of soldiers and workers, the pressure on the Kaiser in the Stavka, who received an unequivocal warning from the generals that the army would not support him, a completely unceremonious and deceitful statement by Prince Max about the alleged denial of Wilhelm. And finally, an attempt to appoint the same Max of Baden regent, that is, the interim head of state while maintaining the monarchical system. All this strongly resembles the Russian February-1917.

Who could stand behind the overthrow of Wilhelm? Let us not forget the links of Max Badensky with the Entente powers. We should not disregard the influence of Britain in the all-European social democratic movement. It was advantageous for the Entente to set the German rear on fire, but for the time being it did not work.

While the German elite remained united, it managed to block all attempts at revolutionary sabotage, although the strike movement grew in Germany during the war. But then there was a split in the establishment. Kaiser, apparently, decided to surrender, and perhaps this was one of the conditions of the Entente for the establishment of subsequent normal relations.

Something similar we have seen in our time on the example of the fate of Milosevic. If this is so, then the sluggishness of the key German security officials, who, like in Russia in 1917, did not undertake any serious counter-actions to curb insurgency and unrest, is understandable. Instead of arrest of the leaders of the revolution, the defeat of its organized part, actions were carried out, very similar to provocations such as shelling of the rally, which only whipped up a revolt.

I suppose that the scheme of the first stage of the German revolution was as follows: British agents raises the sailors ’uprising, the German elite under this sauce seeks to overthrow the Kaiser, his place must be occupied, at least temporarily, by a liberal closely associated with the Entente - Max. Against this background, negotiations for peace begin, and thanks to such a deal with the Entente, a peace treaty can turn out to be quite tolerable for Germany.

On November 11, a truce was signed between the Entente and Germany. Soon the Americans declared their readiness to send food aid to starving Germany. But the revolution did not even think about stooping; the German “February” was turning into “October” before our very eyes. Max Baden's power did not restrain, and the initiative was sought by the so-called Spartak group, consisting of Marxists, to seize the initiative. Spartacus put forward the slogan of socialist Germany and did not recognize the power of the Reich Chancellor, appointed by Max.

True, the majority of the delegates from the Soviets did not support the slogans of the Marxists and at their meeting approved the composition of the coalition government headed by Ebert. The new government immediately attended to the creation of troops, ready to defend the government. Volunteers were carefully selected, very well armed and financed.

The left forces also had their trump cards, their man (Eichhorn) headed the Berlin police, and he created his own “security detachments”. Of course, Ebert could not tolerate the existence of a parallel center of power, and Eichhorn was removed from his post. However, the left revolutionaries brought to the streets masses of people, including armed ones, in protest against the dismissal of Eichhorn. Street unrest began, which resulted in the seizure of the premises of some newspapers. In the printing house of one of them they printed a leaflet with the call “to bring the revolution to a victorious end” and establish the dictatorship of the proletariat.

The second, this time “red” stage of the revolution has begun. Soon the telegraph, the railway directorate and the state printing house were in the hands of the rebels. Nevertheless, the armed forces loyal to the government launched a series of successful counterstrikes. 12 January 1919 of the year, the building of the police presidium, where the rebel group was located, was hit by artillery fire, and after a while the resistance was broken. Small pockets of revolution persisted for some time, but they too were suppressed.

On January 15, Communist leader Karl Liebknecht, a coup leader, was arrested and murdered with the phrase "while trying to escape." Rosa Luxemburg, another well-known figure in the Communist Party of Germany, briefly survived Liebknecht. She was killed on the night of January 16.

Ctrl Enter
Noticed a mistake Highlight text and press. Ctrl + Enter
We are
The development of the military-industrial complex of the Russian Empire in the years of WWIFrom the history of own names of aircraft of Russia, 1885-1917 years
8 comments
Ad