October 22 2015
135
The working visit of Syrian President Bashar Assad to Moscow caused a real information boom literally around the world. Not a single large or relatively large foreign (Western or Eastern) publication was found that would decide to bypass the visit of Bashar al-Assad. If you try to collect all those discussions, the first wave of which swept the world, their total duration will be hundreds of times longer than the visit of the Syrian President to Moscow.


That for protocol (for "general use")? - A cordial welcome addressed to the guest expressed by the Russian president, and no less heartfelt thanks from Assad to Vladimir Putin and the Russian people for the support that Russia has in Syria. 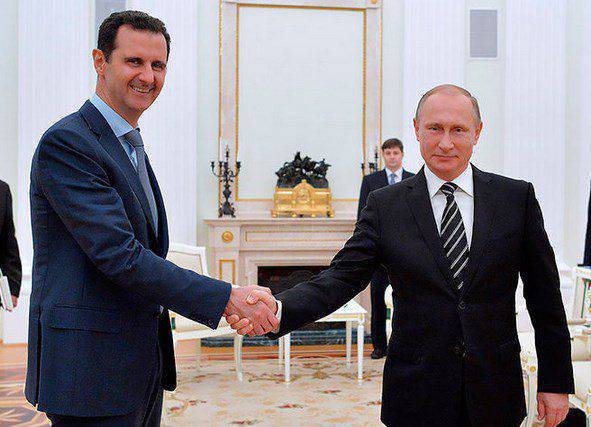 Bashar Assad:
First of all, I would like to express my deep gratitude to the entire leadership of the Russian Federation and the Russian people for the help they have provided to Syria. Thank you for standing for the unity of Syria and for its independence. The most important thing is that all this is done under international law.

And I need to say that, first of all, the political steps taken by the Russian Federation since the beginning of the crisis did not allow the events in Syria to develop according to a more tragic scenario. Terrorism, which has now spread in the region, if it were not for your actions and your decisions, would have occupied much larger areas and would have spread to an even larger area. These steps were confirmed by the fact that you took part in hostilities in the united front against terrorism.

From the statements made public, one can single out not only the gratitude of the Syrian President, but also the fact that, according to him, the victory over terrorism will allow to proceed to the process of political settlement.

Bashar Assad:
It is necessary to pay special attention to the fact that striking terrorism is necessary, first of all, from the point of view that it is necessary to fight terrorism, and secondly, that terrorism is a real obstacle to a political settlement. And of course, all the people want to participate in deciding the fate of their state, and not just the leadership.

Another nuance to which one should pay attention is the words of Vladimir Putin, from which it became clear that Assad flew to Moscow not on his own initiative, but at the invitation of the Kremlin.

Vladimir Putin:
Thank you, despite the dramatic situation in your country, you nevertheless responded to our request and came to Russia.
After a few minutes of talking in front of the lenses of the video cameras, the doors closed, and the world plunged into a veil of guesswork, as Vladimir Putin and Bashar Asad were talking about. Some remain in this veil so far, others have rushed into the dressing, stating that they, it is said, are well aware that the politicians in the Kremlin were discussing. There is also a third category of persons - those who "expressed hope." The third category can be attributed, for example, the German Foreign Ministry spokesman Martin Schaefer, who literally stated the following:
We hope that during the conversation that took place between President Putin and President Al-Assad in Moscow, the question was raised that the methods of warfare practiced by the Syrian government army violate international law and the UN resolution.

No one can interfere with Mr. Schaefer’s hopes, but I would like to clarify that this “point” of international law contains at least something that Syrian government forces violate for several years virtually alone against the onslaught of various terrorist groups? .. And what kind of UN resolution is it? If about the one in which the actions of terrorists in Syrian territory are condemned, is it possible that the representative of the German Foreign Ministry is, to put it mildly, poorly informed about the text of this resolution? ..

The head of the British Foreign Office, Mr. Hammond, commented on the meeting between Vladimir Putin and Bashar Assad in the Kremlin. And he did not just comment, but also post factum advised the Russian president on how to start a conversation with a Syrian colleague. According to Hammond, the Russian president "should" have obtained confirmation of information that the Syrian government army does not use chemical weapon against its own population. That's it ... "It should have been" ...

If we consider that for the removal of chemical weapons from the territory of Syria, proposed by the way by the Russian president, one organization has even received the Nobel Peace Prize, then the question arises: did Mr. Hammond just wake up, or what? .. If so, then Hammond is finally open your eyes and familiarize yourself with the data of specialists who, working in Syria, were not able to confirm the early statements of the same London that the Syrian military personnel used chemical weapons. But then the same experts of the Organization for the Prohibition of Chemical Weapons repeatedly submitted materials according to which ammunition filled with toxic chemical components was repeatedly used by the militants of the so-called Islamic State.

A number of European publications came out with materials that "Putin is preparing Assad as a key party to future political negotiations." For example, a Lithuanian political analyst by the name of Chesnakas (and Lithuanian political analysts also claim to assess the Syrian conflict) announced that the Syrian army is actually only in order for the majority of Syrian territory to be ruled by the “dictator” Assad. This, according to Chesnakas, will allow Moscow to negotiate from a position of strength.

Chesnakas quotes Lithuanian portal Delphi:
So it was during the Minsk talks with Kiev. (...) Now, inviting Assad to Moscow, Russia sends a clear message to the West - Moscow is the actor who should sit at the negotiating table regarding the future of Syria.

“Sends a clear message to the West” or “clearly sends the West” - we should clarify with the Lithuanian specialist, otherwise there could have been difficulties with translation ...

Bashar al-Assad’s visit to Moscow was not paid attention to by the Turkish authorities. Turkish Prime Minister Davutoglu said that "if Assad had remained in Moscow, then the people of Syria would have been better." Well, of course, if Prime Minister Davutoglu understands as “the people of Syria” those ghouls who are trained in training camps in Turkey, and then cross the Syrian border with American weapons in order to immediately swear allegiance to an-Nusra or ISIS, then really ... - Such a “people” will definitely be easier ...

The press service of the Russian president, by the way, said that Vladimir Putin announced the visit of the Syrian leader to Moscow to the President of Turkey and the King of Saudi Arabia. Informing happened at a time when the plane with Assad had already landed at one of the Syrian airports, and therefore the Turkish president and the Saudi king must have quickly opened the notebooks in the cell, which contains information about what the salaries of local intelligence services ...

They expressed their duty concerns about the negotiations between Assad and Putin "friends" in Washington ...

But one of the most excited about Assad’s visit to Moscow was not even Washington. Qatar Foreign Minister Khalid Al Attiyah said that Qatar, in principle, is even ready to launch a military operation in Syria to oppose Assad. Qatar’s Foreign Minister is quoted by the QNA state news agency:

If our military intervention protects the Syrian people from the brutality of the regime, we will do it.

Emir deigns to dare? .. And what - apparently, to dare it is necessary. The Emir’s nerves are strung as strings, because the Russian videoconferencing system, together with the Syrian army, is burning out the plague that terrorizes Syria with the help of its likely Qatari patrons. (A number of experts are inclined to believe that Qatari special services may be involved in the creation of ISIS). Information, of course, is not verified, but, as they say, there is no smoke without fire ...

In the Syrian Ministry of Foreign Affairs, Mr. Al-Attiyah’s statement was countered, noting that Qatar "should first of all think about the consequences that might come for him."

So ... Just a few hours of Bashar Assad in Moscow, just a couple of protocol photos, and the essence of "partners" and other "Syrian friends", along with their concerns, aspirations and emotional throwings with physiological noise and unpleasant smell jumps out.

We are in Yandex Zen
Results of the week. "Aria of the Moscow Guest"
Syria: Americans scare themselves, and Asma Asad buys chairs
135 comments
Information
Dear reader, to leave comments on the publication, you must to register.