October 22 2015
25
In the foreseeable future, the fleet of equipment of the airborne troops should be replenished with new self-propelled artillery guns. In the interests of the Airborne Forces, two projects of the SAO of the Zauralets-D family were developed. The existence of this project was announced at the end of last year. In October, there were new reports on the progress of the project, which may indicate the imminent completion of all necessary work.


For the first time the existence of the project of the CJSC "Zauralets-D", intended for arming the airborne troops, was revealed at the end of last year. At the end of December, the TASS news agency, referring to Dmitry Semizorov, General Director of the Central Research Institute of Precision Engineering, reported that the company was engaged in creating promising self-propelled guns. Within the framework of the Zauralets-D project, two versions of self-propelled artillery guns are being created. One combat vehicle must receive a gun caliber 120 mm, the second - 152 mm. The new equipment will differ from the existing samples by the increased range of fire and the increased power of ammunition.

By the time of the announcement of the first information, the Zauralets-D project from the Central Research Institute Tochmash had apparently advanced far enough and could have approached the testing stage. According to the general director of the enterprise developer, in 2016, the troops will have to receive the first batch of new equipment. In this case, the first batch will be small, and its task will be to check the vehicles in the army. Full-fledged mass production starts only in 2017 year. According to the plans of the end of last year, the serial construction of self-propelled guns and deliveries to the troops should continue until the middle of the next decade. 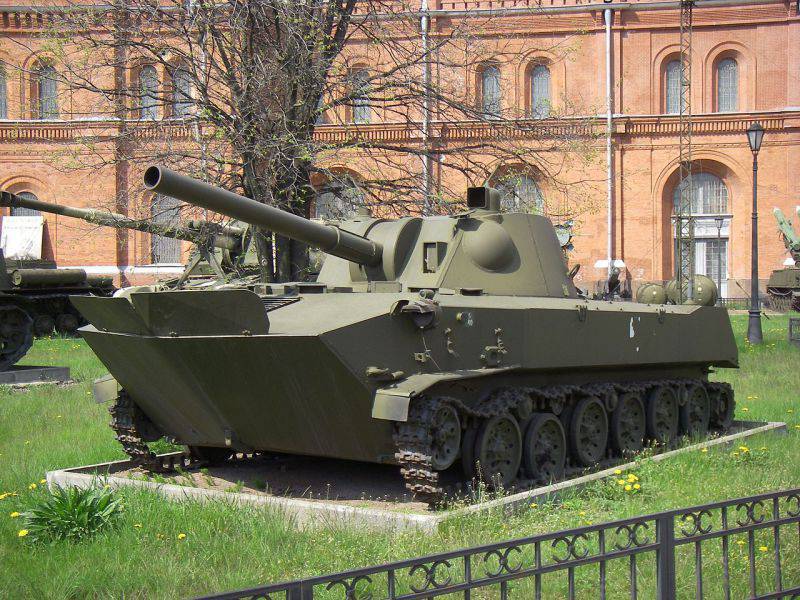 Unfortunately, the first reports about the project of the CJSC "Zauralets-D" for the airborne troops contained almost no technical details of the project. Only the general parameters of the guns that are planned to be used on advanced combat vehicles were announced. Other details appeared only at the end of spring 2015.

In late May, Airborne Commander-in-Chief Colonel-General Vladimir Shamanov in an interview for the Russian Service radio station News"Touched on the development of a promising self-propelled artillery gun. According to the commander, in the near future there should be a self-propelled variant with a 120 mm gun. Work continues on the creation of a 152 mm system. They are 50% complete.

According to the general, such equipment meets all the requirements of the airborne troops and is able to provide the required firepower of the units. In terms of firing range and power of shots, promising IJSC Zauralets-D should surpass existing systems of a similar purpose. Other technical details of the project were not disclosed.

In early October, new information appeared, to some extent revealing the general appearance of a promising CAO. The head of the Central Research Institute of Precision Engineering told RIA Novosti about the current status of the project. According to him, by now the preliminary tests of the prototype of the SAO have been completed with the artillery part of the caliber 120 mm on a caterpillar track. A model of the Zauralets-D machine confirmed its characteristics. All parameters of the new combat module meet customer requirements. In addition, D. Semizorov said that the Ministry of Defense proposed using a different type of chassis as part of the new combat vehicle, as well as replacing the fire control system.

Unfortunately, the details of the project “Zauralets-D” are still unknown. Over the past year, representatives of industry and the armed forces have announced only a few of the most general facts that do not allow for a general picture. At the moment, it is known only about the existence of a prototype self-propelled gun with a 120 caliber mm in metal. Prototypes of the machine with a more powerful gun, apparently, have not yet been built.

It is known that the promising CAO is based on a tracked chassis, the type of which, however, remains unknown. Moreover, according to the latest data, in the near future the Zauralets-D car should receive a certain new chassis. It is possible that the prototype of this CAO was built on the basis of the existing chassis borrowed from serial equipment. Thus, in the future, another type of chassis will become the basis for a promising self-propelled gun.

A combat module is installed on the base chassis with a weapon of one of two types. The Zauralets-D armored car, according to open data, can carry a 120 or 152 caliber gun. It is the combat module with artillery weapons that is of primary interest, but there is no detailed information about it. The requirement of the military regarding the use of a new fire control system may indicate an initial modernization of the existing model, but there is no exact data on this.

Based on the available information, you can try to predict the role of promising technology in the army. Self-propelled gun with 120 caliber mm can be a substitute for machines like 2C9 "Nona", not different in novelty. By increasing the basic characteristics of this option "Zauraltsa-D" will provide not only the replacement of outdated equipment and the general renewal of the fleet of armored vehicles of the Airborne Forces, but also will significantly increase the firepower of artillery.

It is unlikely that according to its characteristics, Zauralets-D will be able to compare with the ACS of the ground forces, such as the 2C19 Msta-S or 2CXNNXX Coalition-SV. Nevertheless, the appearance of 35-mm guns on a self-propelled chassis, suitable for parachute landing, can significantly increase the combat potential and overall firepower of the airborne troops.

Unfortunately, most of the information about the project of the CJSC "Zauralets-D", as well as the appearance of promising technology, remains unknown. Nevertheless, the available data are of great interest, as well as allow us to build forecasts. At the moment, the situation allows you to look into the future with optimism. New projects can really change the situation with the Airborne Forces equipment for the better.

We are in Yandex Zen
Project news CJSC "Lotos"
6-I tank brigade. Technique and training
25 comments
Information
Dear reader, to leave comments on the publication, you must to register.