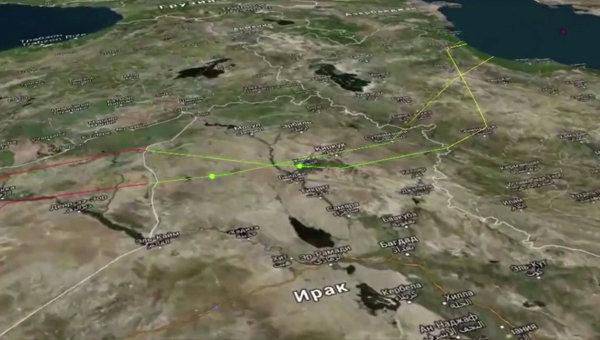 Barack Obama, who devoted the last two years to minimizing the threats from Vladimir Putin instead of confronting them, said last week about the Russian military intervention in Syria that “their strategy is not working.” However, to the dismay of the White House, Putin’s Syrian campaign has turned into an exhibition of new and very impressive weapons systems, vividly recalling the damage Russia could inflict on the US military and its allies. Meanwhile, because of the carelessness with which Obama refuses American commitments abroad, the US Army was unprepared for the military achievements that other countries demonstrate.

Russian air strikes against Syrian rebels (among which, contrary to Kremlin claims, there was anyone but ISIS) took military analysts by surprise, demonstrating their brutal effectiveness. After sources from the US Air Force made a statement that Russian planes can make no more than 20 sorties per day, the Russian Ministry of Defense said that it aviation in Syria in one day, it flew 88 sorties, hitting 86 targets. Using only small patrol ships based in the Caspian Sea, the Russian Navy launched completely new Caliber NK cruise missiles at Syrian targets located XNUMX kilometers away.

These missiles, providing Russians with such shock capabilities that even the US Navy does not have today, were tested for the first time as recently as the 2012 year. Why should a Russian launch cruise missiles from such a long distance if they already have a fleet of ships off the Syrian coast? And to show Obama - and potential buyers - what they can. New missiles are capable of making major changes to the balance of the naval forces, as with them even outdated Soviet ships turn into a deadly threat to the American aircraft carrier groups.

Cruise missiles, as well as the ships carrying them, are the result of huge investments made by Putin since Russian troops invaded Georgia in the 2008 year. Over the past 15 years, the Kremlin has increased its military budget by a factor of 20. As of 2015, the year in Russia is 850 000 is a man in military uniform, and she spends more than 20% of her national budget on defense. So that you do not have the impression that the threat from Russia is excessively exaggerated, it should be said that the US military command has been worried for many years about such weapon systems as the NK Caliber. In 2013, the naval command and congress members openly expressed concern that the Chinese were militarily ahead of America.

The Caliber missiles show that Moscow today possesses such combat capabilities as the United States does not have, although they are armed with larger and much more expensive ships. As Putin himself maliciously stated, “it’s one thing if the experts simply know that Russia allegedly possesses these or other weapons, and it’s quite another when they see for the first time that these weapons actually exist, that they are manufactured on our own military enterprises are of high quality and that we have well-trained and experienced specialists who can use them effectively. ”

The Russians abandoned their re-equipped and modernized armed forces to the rescue of Bashar al-Assad, giving the besieged dictator a new start in life. They helped his regime and the Tehran mullahs supporting him launch a new campaign against opposition militants and civilians. Since the Kremlin and the Ayatollahs sent their forces and means to suppress the Syrian rebels, the White House was finally forced to abandon its confused strategy "leadership behind"* and began to arm those same rebels, which Putin is bombing. After loud promises to prepare 5 400 "moderate" rebels to fight with ISIS, the Pentagon eventually trained a total of 60 fighters for five months, managing to spend 10 million dollars on each of them.

While Moscow and Beijing are arming themselves, preparing for future conflicts, modernizing their weapons and threatening American allies with the help of the newfound force, the Democrats decided to launch a brutal hunt for the US armed forces. Through sequestering, they achieved cost reductions, leaving the US military without the means and support they need to perform their tasks. After Obama came to power, Washington sharply cut the military budget, reduced the number of troops and forced the allies and enemies to think and guess whether the United States could still protect its friends and defend its interests.

Under Putin, Russia threw all its forces into the development of ground forces, the air force and the naval fleetso that they are not inferior to the West in terms of fire and combat power. Meanwhile, the administration refuses to take seriously the military needs of the country. She ridiculed Mitt Romney’s legitimate concerns about the state and willingness of the Navy and propagated Obama’s statement about “horses and bayonets,” which presidential media footmen have been repeating like parrots since election day in 2012. (This is a debate in October 2012 when, in response to Romney’s statement about the small number of US Navy, Obama said: “We also have fewer horses and bayonets, because the nature of our armed forces has changed” - approx. Per.)

Unfortunately, such a contempt for combat readiness has become a pattern for Democrats. During the debates between presidential candidates last week, Hillary Clinton and Bernie Sanders (Bernie Sanders) jointly demonstrated that, if elected, they would continue the current administration’s policy of isolationism. Instead of discussing the real problems of national security, they decided to argue about the socialist fantasies of Sanders and embellish Hillary’s tricks with respect to the Trans-Pacific Partnership. Whichever of them came to the election - Hillary or Bernie - the signal is clear: like Obama, the candidates for the presidency of the Democrats prefer to wage class wars, believing that the American coast will protect themselves.

* approx. "leadership from behind," hmm, so this posture is called ...

Ctrl Enter
Noticed a mistake Highlight text and press. Ctrl + Enter
We are
American Thinker: the loss of EuropeSyria: Americans scare themselves, and Asma Asad buys chairs
50 comments
Information
Dear reader, to leave comments on the publication, you must to register.