Negotiations between Vladimir Putin and Bashar Assad in the Kremlin

October 21 2015
95
On the eve, Syrian President Bashar Asad arrived on a working visit to Moscow, where he met with Russian President Vladimir Putin. The Kremlin’s press service reports that Russian-Syrian negotiations were held both in a narrow and an extended format with the participation of high-ranking Russian leaders.


Vladimir Putin warmly greeted Bashar Al-Assad and made it clear that the Syrian President’s initiative to come to the Russian Federation came from the Russian side:

Dear Mr. President!
Let me cordially welcome you to Moscow. Thank you, in spite of the dramatic situation in your country, you nevertheless have responded to our request and come to Russia. 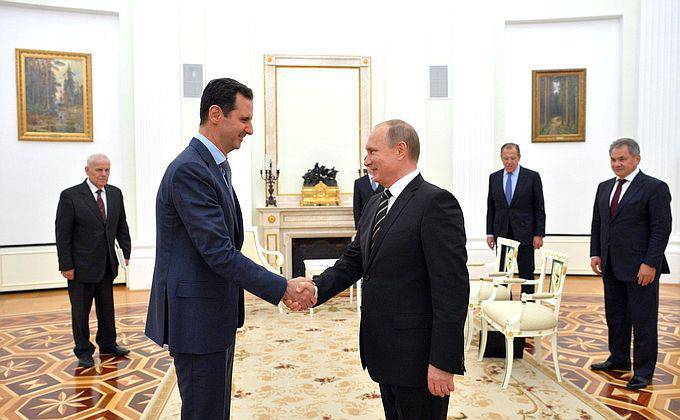 Press office The Kremlin leads a statement by the Russian president:
In accordance with your request, we have made a decision and provide effective assistance to the Syrian people in the fight against international terrorism, which has launched a real war against Syria. The Syrian people have almost single-handedly resisted, fought against international terrorism for several years now, have suffered serious losses, but lately, they are achieving serious positive results in this struggle.

Attempts by international terrorism to put under its control considerable territories in the Middle East and destabilize the situation in the region cause legitimate concerns in many countries around the world. This worries us, Russia, I mean that, unfortunately, in Syria, with weapons in the hands of government troops against the war and come from the republics of the former Soviet Union, they read about 4 thousands, at least. And we, of course, cannot allow them, having received combat experience and having undergone ideological processing, to appear on the territory of Russia.

As for the settlement in Syria itself, we proceed from the fact that, based on the positive dynamics in the course of the hostilities, ultimately, a long-term settlement can be achieved on the basis of a political process with the participation of all political forces, ethnic and religious groups. And ultimately, the final word, of course, must remain solely with the Syrian people.

Syria is a friendly country for us. We are ready to make our own contribution not only in the course of hostilities in the fight against terrorism, but also in the course of the political process. Of course, in close contact with other world powers and with the countries of the region that are interested in the peaceful resolution of the conflict.

According to the president of Syria, it is terrorism that today prevents the political process of resolving the situation from starting. Bashar Assad noted that along with the victory over terrorism, the Syrian people will receive a full-fledged opportunity to participate in deciding the fate of their state.

Further, the parties proceeded to a detailed discussion of the pressing issues behind closed doors.