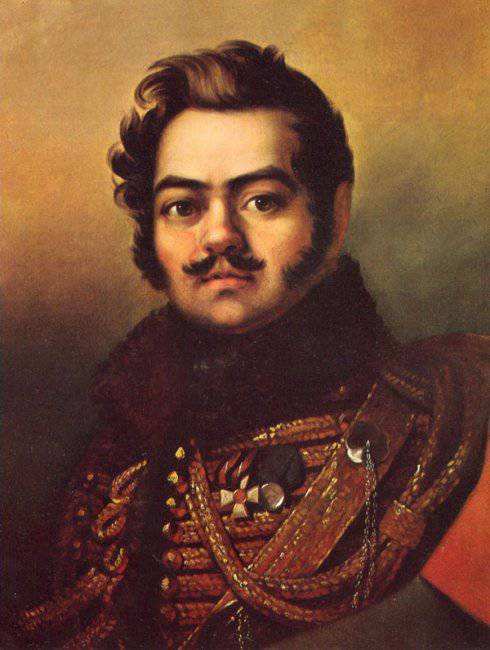 The famous military and statesman of the first quarter of the XIX century, Major-General, the hero of the Patriotic War of 1812, a talented military writer and poet, the founder of hussar lyrics Denis Vasilyevich Davydov was born 225 years ago - 27 July 1784. Passionate, boiling nature, a hot patriot. He participated in all the wars that Russia waged during his lifetime.


Denis Vasilievich was born in Moscow in a military family. With 1801, his service begins. He enrolled as a standard-cadet (a rank in cavalry assigned to nobles who waited for production as officers) in the cavalry regiment, a year later he was made cornets, and in November 1803 of the lieutenant. During this period, his literary talent begins to unfold. Distinguished by wit and free-thinking poems quickly brought him popularity. Since 1806, Davydov has served in the St. Petersburg Life Guards Hussars. Within six months, he is the head captain. Service Davydova in this period of his life was not burdensome. “In the whole regiment there was more friendship than services ...” But for Russia this time was rather alarming, and Davydov considered it his duty to get into the army. After the trouble, he was enlisted as adjutant to Prince PI Bagration.

Russian army, cramped by Napoleon, located near the village of Wolfsdorf. The rearguard of the Russian army under the command of Bagration covered a further retreat. The battle of Wolfsdorf in January 1807-th - Davydov's baptism of fire in which he showed remarkable bravery. Bagration introduced him to the Order of Vladimir IV degree. For the subsequent battles at Landsberg and Preussis-Eylau Davydov was awarded the gold cross on the St. George ribbon. Intense battles followed one after the other. 14 June 1807 of the year in the bloody battle of Friedland Napoleon won. The Russians fought with great stubbornness, but under stormy artillery fire they were forced to withdraw. For participation in the Battle of Friedland Davydov was awarded a golden saber with the inscription: "For courage."

7 July 1807, Russia and France concluded the Treaty of Tilsit. And in February of 1808, the war between Russia and Sweden began. Under the terms of the Peace of Tilsit, Napoleon granted Alexander I the right to dominate Eastern Europe and promised not to provide military assistance to Turkey. The Russian government decided to use the favorable environment and strengthen the military-political position on the Baltic Sea coast in order to secure Petersburg. Denis Davydov was assigned to the vanguard, commanded by Colonel Ya. P. Kulnev. Under the leadership of Kulnev, he went through a good school of outpost service — rapid maneuvers, raids, cavalry skirmishes, and skirmishes. The war with Sweden ended with the peace of Friedrichshah, signed in September 1809. By its terms, Finland was ceded to Russia as the Grand Duchy of Finland.

The Russian-Turkish war 1806-1812 also became a good school for a young officer. He participated in the capture of the Turkish fortress of Silistria and in the bloody battle of Shumla in June 1810. For combat feats in these battles was awarded diamond marks of the Order of Anna II degree and produced in the captain. 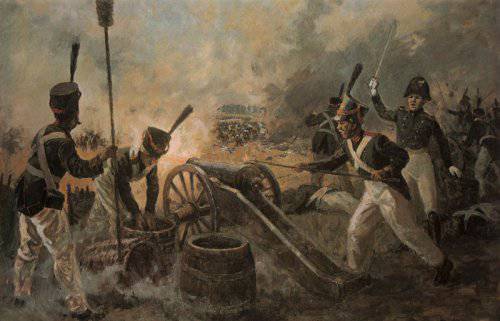 Combat experience, extensive military knowledge, acquired by Davydov in the first decade of his military service, were useful in the Patriotic War 1812 year, in which he played a prominent role.

From May, 1812-th Davydov - commander of the first battalion of the Akhtyrka hussar regiment with the assignment of a lieutenant colonel. By the time Napoleon began his campaign, the 2-I of the Western Army of Bagration was located in the vicinity of Volkovysk, and the Davydov regiment was in Zabludov, near Bialystok. This is where the 1812 war of the year caught him.

The blow of Napoleon in 1812 caused the birth of the national liberation nature of the war. Davydov was among the few officers who recognized this phenomenon and raised the banner of partisan struggle. He appealed to Bagration with a request to single out a special cavalry formation for partisan operations in the rear of the Napoleonic army. The idea aroused interest in Bagration, who turned directly to Kutuzov. Despite his approval, Davydov was singled out all 50 hussars and 150 Cossacks! Command skeptical about the effectiveness of the actions of the guerrillas.

Supporting the initiative of Davydov, Bagration ordered to allocate him the best hussars and Cossacks. On September 6, the partisan detachment of Davydov, consisting of 50 hussars and 80 Cossacks (instead of the promised 150), as well as three officers of the Akhtyrsky regiment and two Donkey Cossack regiments, secretly left the village of Borodino and moved into the deep rear of the French. 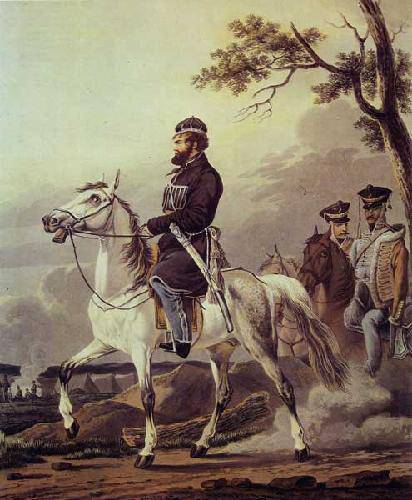 The first supporting base of the partisans was the village of Skugarevo, Smolensk Province. Fighting Davydov began on September 13, on the day Napoleon entered Moscow: Davydov's detachment attacked a large detachment of French marauders. 90 people were taken into captivity and property stolen from the peasants was repulsed. 14 September another raid - on the enemy transport in Tsarevo-Zaymishche. The result - more 120 prisoners, 10 food trucks and one wagon with cartridges.

The partisan detachment of Davydov stayed in Skugarev 10 days. During this time, more than 300 people were captured, more than 200 Russian soldiers were released from captivity, 32 artillery carts and a large number of trucks with military equipment and food were captured. The first experience taught that the best tactic for partisans is continuous movement, which does not allow the enemy to know where they are.

By the end of September, 180 Cossacks joined the Davydov detachment. Now, under his command, 300 cavalrymen, not counting infantry. It became possible to deploy large-scale actions. The detachment was divided into small battle groups. The connection between them was maintained by peasant volunteers. The success of the squad increased.

Guerrilla pickets, set by Davydov, controlled large areas under control, forcing the enemy to escort transports with a reinforced guard - sometimes up to 1500 people. Under the blow of the partisans, the city of Vyazma itself was turned, turned by the French into an important stronghold with a strong garrison. Davydov personally made a plan of attack on the city. September 25 after a rapid attack the city was taken. The enemy lost more than 100 people killed and about 300 prisoners. Trophies - 20 trucks with supplies and 12 with weapons.

The courageous actions of the partisans Davydov alarmed the French governor of Smolensk, General Baraghe d'Ille. According to his order, a cavalry detachment of sabers in 2000 was formed from the teams going through Vyazma with the task of clearing the whole space between Gzhatsk and Vyazma from the Russian partisans. A great price was promised for the head of Davydov himself. However, the attempts of the enemy were in vain. So, October 1 between the villages of Yurenevo and Gorodishche, the partisans fought three battalions of Polish infantry that accompanied a large transport. Only 35 people lost, but captured huge booty: 36 artillery decks (gun platform), 40 provision trucks, 144 ox, about 200 horses, captured 15 officers and more 900 privates. In the area of ​​the village of Gorodishche, a third partisan base was set up. For its protection were allocated about 500 militias.

"Partisan Army" Davydov grew rapidly. Small detachments of infantry were created from the repulsed Russian prisoners of war. Kutuzov appreciated the success of Davydov, made the partisan in the colonels. To gain to Davydov arrived Don Cossack regiment Popov, consisting of five hundred. The successful actions of the Davydov detachment convinced Kutuzov to fully develop the partisan movement. At the direction of the field marshal, several more partisan detachments led by officers of the regular troops were created. The number of Davydov's troops increased as well: he had two lightly cossack regiments at his disposal. The unceasing pursuit of the enemy and new successes. By the end of October, Davydov’s detachment captured more than 3500 privates and an 43 officer. 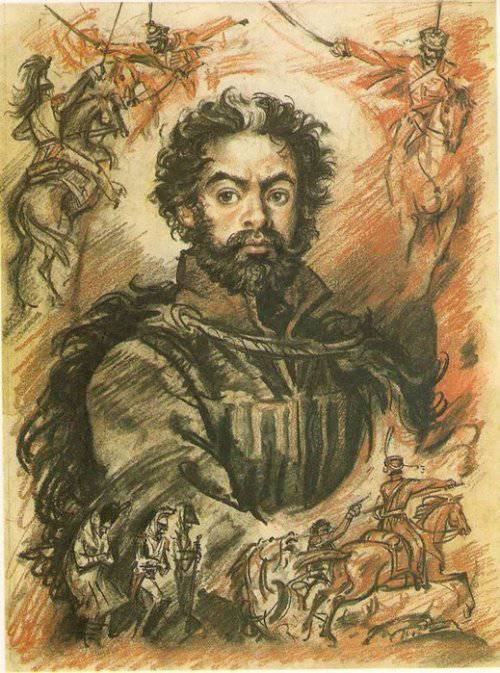 At the beginning of November, a French brigade of General Augereau concentrated on the road between Yelnya and Smolensk. Davydov's squad in 1200 sabers with 80 huntsmen and 4 guns during the rapid attack broke the enemy. 2000 privates and 60 officers led by General Augereau were taken prisoner. Pursuing the enemy, Davydov arrived in a village near the town of Red. In a personal meeting with the partisan, Kutuzov said: "Your successful experiments proved to me the benefit of the partisan war, which caused so much harm, infliction and infliction on the enemy." During November, Davydov's units conducted a series of successful operations. For courage Davydov was presented to the Order of George IV degree.

The expulsion of Napoleon's troops from Russia was coming to an end. In early January, 1813, Colonel Davydov, joined the main vanguard of the army of General F. F. Wintzingerode. With his flying cavalry detachment, Davydov served as the advanced patrol of the main avant-garde army. An old partisan detachment remained at his disposal: two regiments of the Don Cossacks, a team of hussars and combined Cossacks with a total of 550 men.

In early January, 1813 began the famous Foreign Campaign. Walking in the vanguard of the advancing Russian army, the squad of Davydov was the first to enter Saxony. February 13 participated in the rout of the Saxon Corps of General Rainier under Kalisch, March 22 occupied the capital of Saxony - Dresden. In the autumn of 1813, Davydov received at his disposal two Don Cossack regiments. At the head of these Cossack regiments, the poet-partisans during the autumn campaign of 1813 participated in many avant-garde battles and in the grand “Battle of the Nations” under Leipzig on October 16-19. Then Davydov participates in many battles of the 1814 campaign of the year. After the battle at Brienne 29 in January, 1814 and 1 in February at La Rothiere Davydov received the rank of major general as a reward. Napoleon could not prevent the defeat of his empire. As part of the Russian army, which entered Paris 30 March 1814, was Davydov - at the head of the hussars brigade. 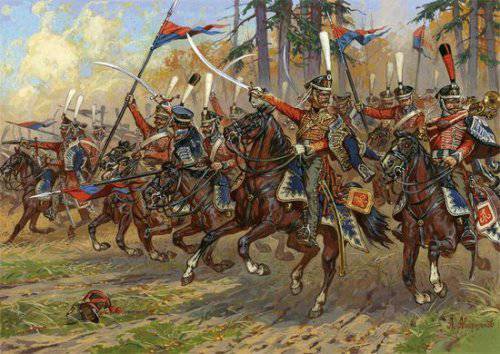 Davydov strongly condemned the post-war order in the Russian Empire. The guard turned, as Davydov said, into a "amusing army." Considering it impossible to serve in the capital under such orders, he continued his service in the province in secondary staff posts. In November, 1823, Alexander I signed a decree on his dismissal "for the disease."

With the beginning of the reign of Nicholas I Davydov decided to return to the line. At the beginning of April 1826, he was again assigned to the service of "in the cavalry". In August, he was assigned to Georgia - the Russian-Persian war began. Upon the arrival of Davydov in the Caucasus, the commander-in-chief of the Caucasian army, General A.P. Yermolov, appointed him commander of a three-thousandth detachment for offensive actions against the Persians. Davydov was given the task of stopping the movement to the north of the Erivan Sardar (the title of the Persian governor of Erivan) and his brother Hassan Khan and knock them out of the borders conquered by the Russians. Already in the beginning of October, 1826, Davydov, utterly routed the four-thousandth detachment of Hassan Khan, penetrated the Persian border at the natural boundary Sudagend and by December built a fortress here.

Denis Davydov was an active participant in eight military campaigns, one of the most talented, educated and brave officers of the Russian army. Denis Vasilyevich died 4 May 1839 year and was buried in Moscow.
Ctrl Enter
Noticed oshЫbku Highlight text and press. Ctrl + Enter
We are
Poet partisans. Denis V. DavydovVasily Kashirin: Russian troops entered Bessarabia and liquidated the Bujak Tatar horde at the start of the Russian-Turkish war of 1806-1812.
Military Reviewin Yandex News
Military Reviewin Google News
1 comment
Information
Dear reader, to leave comments on the publication, you must sign in.