October 28 2015
15
2 November marks the 87 anniversary of the birth of the youngest pilot of the Great Patriotic War Arkady Nikolaevich Kamanin. 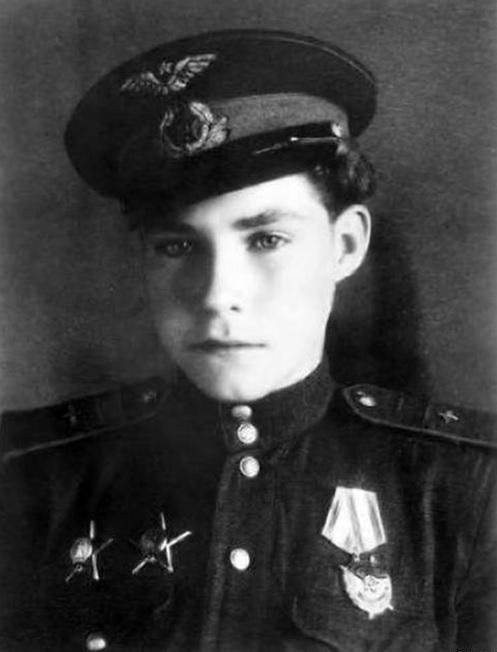 He was born in the Far East in the family of a Soviet officer, pilot Nikolai Petrovich Kamanin - the future Hero of the Soviet Union. Nikolai Petrovich will receive this title in the near future for saving Chelyuskinites.

The fate of the sons and daughters of the military is known - frequent moves. Remember the famous movie "Officers". So Arkady lived in different cities where his father served. And shortly before the war, the Kamanins' family received an apartment in Moscow.

The boy grew desperate, courageous and enthusiastic. He seriously went in for sports, played very well on the accordion and button accordion, and read heavily. But most of all he was interested in the service of his father. He even spent all his vacations at the airport, dreaming of masterly mastering the profession of mechanic. Moreover, just before the war he persuaded his father to arrange him, a thirteen-year-old boy, as a mechanic in Moscow aviation factory! And after all he worked, moreover, a complete, not “childish” shift, without fear of any difficulties.

But here is the Great Patriotic War. Nikolai Petrovich was sent to Tashkent, where he served for two years (the family, of course, also moved to this city). Two years later, the pilot Kamanin was appointed commander of the 8-th mixed, and then 5-th Guards ground attack aviacorpus. In the spring of 1943, Nikolai Petrovich was given the rank of Major General, and soon his wife and son came to him. Of course, no one was going to leave the boy here, at the location of the military unit. He wanted to send to the rear, to the family. But it was not in the character of Arkady. With all determination, he told his father that he would not go anywhere and would be with his parents (mother also began working at headquarters). Nikolai Petrovich initially refused. Then the son, one might say, hit the sore spot of a Soviet officer: he was by that time already an experienced mechanic, and the specialists at the front were desperately needed. And Nikolai Petrovich, reluctantly, agreed.

So the boy was enlisted as a volunteer in the ranks of the Red Army to the position of mechanic for special equipment in the 423 squadron of the Kalinin Front communications squadron.

Now he has a new dream: to become a pilot and make combat missions. Arkady confessed to his father, he gave permission to study. And little by little, the older comrades began to teach the boy how to fly, and devoted themselves to theory and practice. And the first “iron bird” for the young mechanic was the U-2 communication plane. This aircraft is double, it was created as a training and had dual control in both cabins, so Arkady had the opportunity to first try himself as a navigator and flight engineer. And then, during this study on the move, there was a case that very clearly showed the boy's abilities. Once during the departure a bullet struck the cockpit glass, the pilot was blinded. Feeling that he was losing consciousness, he managed to transfer control to Arkady and switch the walkie-talkie to him. And he quickly pulled himself together, skillfully directed the plane to the airfield. True, the landing was not allowed, the plane that was leading the squadron commander rose to the rescue. On the radio, he gave detailed instructions to Arkady. He did everything exactly and landed safely.

And in July, 1943, he had already passed the exam to his father-general in order to be allowed to fly. And passed the first time, and in fact about the severity of Nikolai Petrovich in the squadron was legendary. They say there was even a case when some student took the exam for him 8 times!

And so the lad, now the pilot of the 423 th Separate communications aviation squadron, began to make reconnaissance flights on the U-2. In order to give the car a swift appearance, Arkady asked the artist to paint an arrow on his plane, which resembled a lightning bolt, especially for him. True, in the squadron Arkady was not called a pilot, but a flyer - yesterday's boy looked very young against the background of adults. Not tall, brisk, with tenacious little eyes, he did not seem to walk, but ran all the time. He never spared himself: his hands were forever torn into the blood, as they penetrated the most inaccessible places of the aircraft. Charging done every day, even in the cold, in a T-shirt. He was very afraid not to see his father's son in him.

At first, Arkady flew between the airfields of the corps. But soon life itself confirmed its mastery: the messer clung to his Y-2 tightly. The Soviet pilots who had been following this were already about to rescue the flyer, but he completely escaped the persecution on his own, having left the Messer on turns. After that, the boy was no longer afraid to entrust the most important tasks. He took them for zeal and seemed to fear nothing in the world.
Once, returning from a combat mission to the location of the headquarters, Arkady noticed in the neutral zone a downed IL-2. even from a height the boy saw that the cockpit was closed. This could mean only one thing: the pilot either died or was seriously injured and could not get out of the car himself. Arkady planted his Y-2 on the same neutral strip crammed, was able to open the cockpit, pull out the pilot and all the photo equipment, drag it to his plane, land there and take off! And all this - in a matter of minutes, because the strip was watched by both the Soviet fighters and the Germans. The fascists, of course, quickly saw "impudent." Mortar fire was opened, but our artillery rescued. True, there is information that the fascists did not have time to open fire, but were preparing a raid, which our infantrymen had stopped.

But the essence does not change: Arkady safely reached his. A rescued pilot turned out to be a lieutenant by the name of Berdnikov, whom the Nazis shot down while returning from a reconnaissance flight. For this feat, a fifteen-year-old boy was awarded the Order of the Red Star.

The second Order of the same Arkady received in the 1944 year. Then he fought on the 2-m Ukrainian front. At the headquarters of the front attacked a detachment of Bandera. Under continuous shelling, the guy managed to get into his Y-2, took off, threw gangsters with hand grenades, and even called for reinforcements! The attack was repulsed.

“Good,” answered Proskurov. “Climb onto the roof of the shed and watch through binoculars.” As you see in the air a new group of our attack aircraft, shout to me. Keep track of how many airplanes there will be, what course they take - in short, everything, everything. If suddenly German fighters - also immediately report.

Arkady sat down on the ridge of the roof and began to observe. And it was summer. Hot, hot, no fascists in the sky. And then - the boy is the boy! - he began to heel the straw on the roof of the barn. And from there - a swarm of wasps! They bit the kid so that his face in a few minutes began to turn into a tomato.

- Normal work! - answered the captain. - Of course, it hurts you now, here you are unfair. I would sit quietly and carry out the task - the wasps would not touch you. Fly to your airfield, you have little time, your eyes can finally swim.

Annoyed Kamanin flew. And over the edge of the forest saw our tank T-34. The caterpillar stretched beneath him like a carpet. I had to go down and ask if I needed any help. It turned out to have interrupted two trucks. The tankers picked up the new trucks, but they did not have bolts for the connection.

- You show me on the map where to fly, I'll deliver you the bolts! - said the boy.
And he flew and found, and even in that medical unit he managed, on the advice of the tankers, to run to the nurse Marina and ask for a burn ointment, which helped him greatly. He returned to the tank crews, dropped their bolts. And they followed him and waved their hands, and shouted something, and smiled ...

True, at their airport Kamanin was met not with smiles, but with frightened exclamations:
- Who is it that you have embellished?
- The Nazis were let loose! - the boy joked off история with bites it seemed ridiculous ...

There are among the military awards Arkady and the Order of the Red Banner. He was received by his young pilot at the beginning of 1945 of the year for successful delivery to the guerrilla unit (district of the city of Brno in the Czech Republic) of food for the radio and secret documents. The guy flew about two hours completely unfamiliar terrain behind the front line. His route passed through the mountains, the flight conditions were extremely difficult.

Or another case, funny, but, nevertheless, saved human life. The fact is that during a war, when taking off from wet ground, the mechanics pressed the tail of the aircraft so that it would not “peck its nose”. So, one pilot took off, but the mechanic did not have time to jump off and hung on the tail of the plane. He would have crashed, of course, but Arkady, who was flying around the airfield at that time, was waiting for landing. As close as possible to the plane with the man on the tail, the flyer attracted the attention of a red rocket and began to show signs of what happened. The pilot understood and landed the plane. A technique, tightly clinging to the tail of the aircraft, tore off, they say, almost half of the squadron.

Over the years of service pilot Kamanin received six government awards and numerous medals. He made more than six hundred sorties! 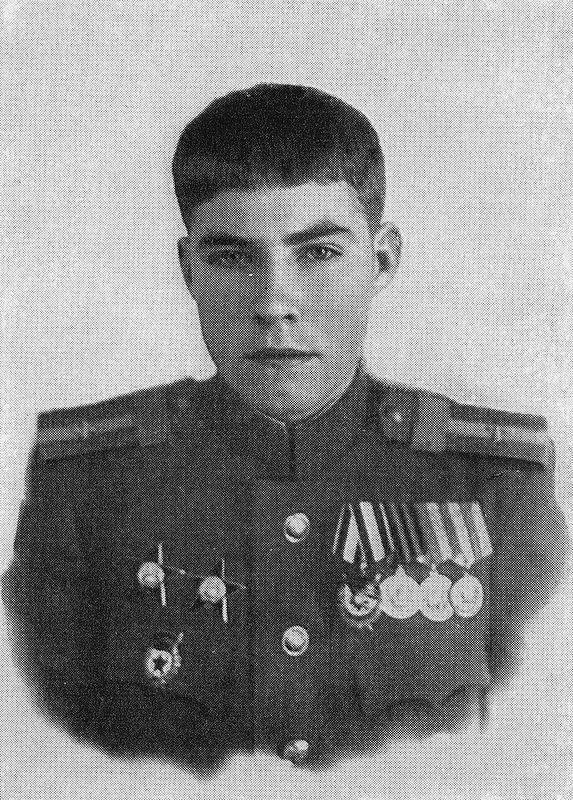 After our Victory, Arkady, who was not yet seventeen years old, only in one year caught up with his peers, who was behind his studies. And in October, 1946 of the year entered the N.E. Air Force Academy. Zhukovsky - this educational institution graduated from his father, Nikolai Petrovich. He didn’t know that he had only half a year left to live: after falling ill with meningitis, 13 on April 1947 will return home from the exercises, lie quietly on the sofa and die suddenly. I did not know ... He was preparing to live and learn ...