October 21 2015
110
"The Wall Street Journal" spoke about the achievement of the next "bottom" by the Russian economy. Voice of America scares Russia with the “consequences” of Iran’s entry into the hydrocarbon market. Dilma Rousseff, President of Brazil and Russia's BRICS partner, criticized Moscow’s intervention in Syria. The Estonian press claims that Russia can be completely prevented by force. Well, the Americans wrote something: they say that the absence of Russian planes in the Iraqi skies is a merit of Washington.


Andrey Ostroukh (Andrey Ostroukh) in "The Wall Street Journal" spoke about the achievement of the Russian economy of the bottom.

Retail sales in September of 2015 in the Russian Federation fell by more than 10%. At the same time, investments in fixed capital and industrial production declined. True, the pace of decline was slower than in previous months, the analyst notes. Capital expenditures, which are considered the second most important economic “driver” after consumer spending, fell by 5,6% in September compared to the 6,8% fall in August. The decline in industrial production slowed to 3,7% (the lowest decline since March, 2015).

Barclays Capital experts indicate that the Russian economy is "at the bottom of its cycle." In their opinion, the recession will not go further. However, there is no need to talk about a “speedy recovery” - indicators do not speak about it.

Russian consumers are suffering from an economic crisis characterized by high inflation (close to 16%).

The data of the Federal State Statistics Service show that retail sales in the Russian Federation fell by 10,4% in September compared with the same indicators a year ago. In August, the decline in sales was expressed in 9,1%. In the first nine months of the year, retail sales fell by 8,5%.

The average real wages of Russians (taking into account inflation) decreased over the past months of 2015 of the year (to September) by 9,7%.

The economic crisis is caused by the rapid decline in oil prices and Western sanctions. The Ministry of Economy believes that gross domestic product will fall by 3,9% this year.

True, Deputy Minister of Economics Alexei Vedev notes that the economic downturn probably has reached its bottom. Although GDP fell by 3,5% in September compared to the previous year, Mr. Vedev says that the seasonally adjusted GDP grew by 0,3% over the month (i.e., September 2015 was compared to August 2015).

What could mean for Russia the process of lifting sanctions against Iran?

In an interview with Voice of America, Alexei Arbatov, head of the Center for International Security at IMEMO RAN, said that for Russia the beginning of Iran’s withdrawal from the sanctions carries risks: “For the United States and China, there was no conflict of interest in reaching an agreement, all the advantages only complemented each other. For Russia, Iran’s entry into the oil and gas market carries potential risks, as this may further lower hydrocarbon prices. And the appearance of another competitor, despite the fact that Iran has repeatedly said that it can become an alternative supplier of hydrocarbons to Europe, is not very good. Among other things, the opening of Iran to political and economic ties with the West relatively reduces Russia's influence on this country. ”

While Russia was frightened by the next economic “bottom” and “consequences” of the upcoming Iranian oil and gas trading, Dilma Rousseff made a rather sharp statement about Moscow.

Andrei Netto, special correspondent of the Brazilian newspaper “Estadao” in Stockholm, in the article “Dilma criticizes the military intervention of Russia in Syria” (the translation source is "InoSMI") spoke about the criticism of Mrs. Rousseff of the Russian "intervention" in Syria. 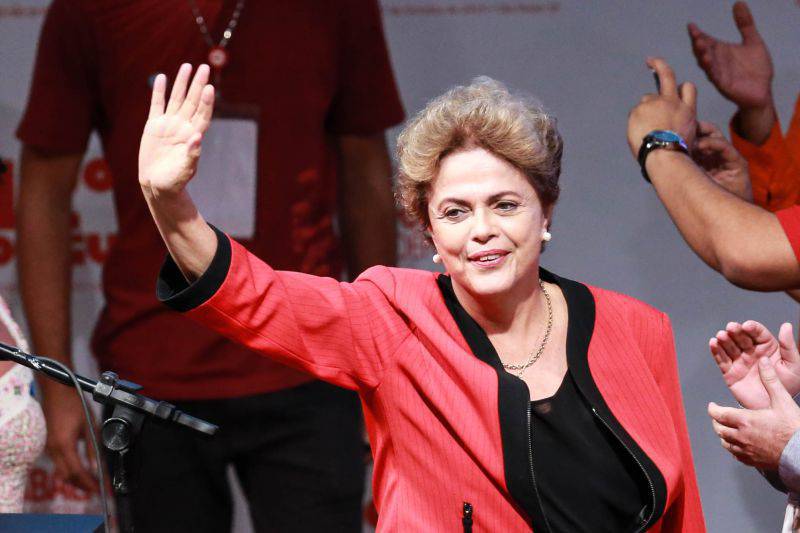 “Partner of the Russian government in BRICS, President Dilma Rousseff on Monday (October 19) criticized Russia's military intervention in Syria. Speaking in Stockholm with the Prime Minister of Sweden Stefan Leuven, the Brazilian president expressed support for the diplomatic negotiations between the “major powers” ​​that would lead to the creation of a coalition for the joint bombing of the Islamic State terrorist group.

The special correspondent notes that Rousseff stressed the critical attitude to the current international military intervention in Syria, but this time she specifically mentioned Russia: “I do not think that the invasion and bombing of the country will resolve the situation. This is a problem that also applies to Russian intervention. ”

Dilma Rousseff believes that this conflict has no military solution. At least, she does not believe in him: “The Russian intervention is explained by the fact that it represents, among other things, a defense against the ISIL group. But the latter has groups with similar components, such as Al Nusra Front and Al Qaeda Front. I do not believe in a military solution to the Syrian conflict. ”

How to find a solution if all the “interventionists”, including Russians, go the wrong way?

According to Dilma Rousseff, the major powers need to come to an “agreement”, which would then result in “joint actions”.

“We should not speak with the“ Islamic State ”. In Syria, not only the "Islamic State". We need to try to find a solution through the major powers, ”she said.

Passions about Russian “liars” began to boil over in Estonia as well.

On the "InoSMI" A fresh review of Estonian newspapers was published under the general heading: “Estonian media: Russia can only be thwarted by force.”

Russia has a plan for Syria, notes Postimees. Yes, such a plan that has no boundaries. There are no guarantees, the author believes that Russia will not repeat the Syrian experience in Afghanistan or Libya. And what to do? Here is an Estonian recipe: “In a situation where the UN Security Council does not act, Russia can only be prevented by force.”

At the same time, the Estonian press is inflating the theme of the “guilt” of the Russians in the crash of the Malaysian Boeing. The Moscow Postimees correspondent thinks that Russia's reaction to the report of the Netherlands Security Council on the death of the Boeing is “a good example of how decent and respected people are forced to move in line with a policy built on lies”. The journalist is confident that the rocket was released from the territory uncontrolled by the authorities of Ukraine, and “it is possible” that the Russian settlement, “urgently called back home after that,” did it.

Democratic Estonia is protesting against Nord Stream 2. Eesti Päevaleht is indignant, noting that this pipeline will supply Europe with up to 30% of the gas it needs. What's so terrible? It turns out that the Russians will thus make Europe dependent, which will damage its security.

Former Ambassador of Estonia to the Russian Federation Jüri Luik decided to develop the theme of Russia's dislike for Estonia. His words at a security conference are quoted by the “ERR”. According to the ex-ambassador, earlier for the Russian media, one of the main topics was the position of the Russian-speaking minority in Estonia, and now the topics of “pathology” are taken into account: “For example, that Estonia is a pathological opponent of Russia. They say that what the Estonians say about Russia should be rejected or not considered at all. ”

While others dream of "power" against the Russians, the Americans are already bragging about their achievements. It turns out that Washington has managed to stop the expansion of Russia ... in Iraq.

The head of the Joint Chiefs of Staff (USP) of the US Armed Forces, Joseph Dunford, said that the Iraqi authorities decided not to ask for military assistance from Russia in the fight against IG thanks to Washington. The words of the commander leads "Lenta.ru" with reference to Reuters.

Mr. Dunford recalled that about two weeks ago, Iraqi Prime Minister Haider al-Abadi called for a coalition involving Russia and Iran to be involved in the fight against terrorists. American diplomats "worked with al-Abadi," and such statements no longer sounded, the agency said.

With such triumphant victories on the diplomatic front, let us add, American officials and politicians could “work” with the leaders of the IG. Senator McCain, they say, has friends at the very top of the Islamic State.

As for the Estonians, Dilma Rousseff and representatives of Iran, gentlemen from the State Department regularly speak with them. There is no doubt. Someone less pliable, someone more, but each has their own goals and objectives, and they do not always go parallel to the goals of Russia. Alas, it is often perpendicular.

Ctrl Enter
Noticed oshЫbku Highlight text and press. Ctrl + Enter
We are
New plants and workshops in Russia in 2015 yearBRICS: friendship against the dollar
Military Reviewin Yandex News
Military Reviewin Google News
110 comments
Information
Dear reader, to leave comments on the publication, you must to register.