The author of the article Spacelessness, Alexander Knivel, has no doubt that near space should be serviced by aerospace systems, since they have many advantages over the traditional method of delivering cargo to near-earth orbit, including reusability and the ability to start from several points. At the same time I am confident that such launch vehicles are actively developing exclusively outside our country. This is not true. Historically, this direction has arisen and developed in Russia.

"Spiral", MAKS, "Buran" - famous names of famous projects. But few have heard of the work of Academician Ivan Filippovich Obraztsov on the creation of the reusable aerospace transport complex "Cosmoplan". The task of removing and returning the spacecraft (SV) Obraztsov proposed to solve at the expense of a system with a horizontal start and landing. Not understanding the essence of this project, the specialists of the rocket technology gave a very negative answer to this proposal of the scientist. A similar view on the exclusivity of the rocket persists to the present day, which contradicts the goals of the further development of space tools of the information and telecommunications state structure. 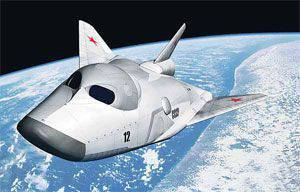 The development strategy of launch vehicles (SV) - today it is the Angara launch vehicle (PH) - dooms the developers of spacecraft and valuable scientific equipment to the only way - irrevocable delivery in one direction. The decommissioned or completed spacecraft are turned into space junk.

The strategic direction of modern means of communication is considered to be the maintenance of a mobile object (in the broadest sense) cellular communication and the Internet. This direction is developing at a very fast pace (change of epochs is estimated at 12 years), and the output of cellular systems to the space level with the adopted strategy of rocket production in Russia is impossible neither in terms of implementation, nor in costs, nor, of course, in efficiency. A fundamental revision of the SV design principles is needed: in parallel to the only accepted method of delivery of a launch vehicle, it is necessary to create aerospace aids with a horizontal start and landing (of the type that Skylon is actively developing abroad).

A prerequisite for the consideration of the problem of the inconsistency of the directions of development of space information systems (IS) and SV was the understanding and awareness of the place and importance of the use of relevant technologies in various fields of activity of Russian society. The meaning of data transfer processes is reduced to maximizing the use of all types of knowledge in all socially significant forms of activity with the help of a whole range of organizational and technical measures. A higher stage in the development of mankind is the information society that is emerging before our eyes, changing the institutions of the traditional industrial world.

The emergence of a fundamentally new information economy is becoming the basic component of the next form of social organization that requires a transition to a higher level of development of technology and knowledge. What happens is characterized by the term “high touch” of society and technology. One of the manifestations is the formation of social (collective) intelligence. Its functioning is unthinkable outside the developed technological base of interaction and free communication between all levels of productive forces, knowledge-intensive areas of knowledge and their applications. Interdisciplinary data exchange is a powerful incentive for horizontal mutual enrichment of sciences and the emergence of new areas at the interface of knowledge.

Awareness is the main factor of social intelligence and social will, acting in a comprehensive and purposeful manner. The information network can fulfill its purpose provided it satisfies the growing social, technological, economic and other needs of the society. The telecommunications system should extend to the entire territory of the country in order to provide a wide and continuously increasing composition of complex services to users in all socially significant areas - economy, science, education, health care, culture, entertainment, manufacturing, energy and transport, banking, trade, government structures , law enforcement agencies and law enforcement agencies and other consumers.

According to the totality of the laws of formation and formation of the information community in Russia, all the expected tasks of serving society will be of a complex intellectual nature.

The proposed new Global Terrestrial Space Information System (GLONIS) is designed to provide, at an integrated level, the functions of navigation, communications, control, remote sensing of the Earth, monitoring of the natural environment and human activity in a single ground-space structure.

The conjugation of the GLONIS space segment with permanently operating ground-based IS defines extremely high requirements for reliable spacecraft operation in orbits. This can be achieved by creating an appropriate operating structure for a multi-profile ground-space system, which is distinguished by the following:

-multiple use of each spacecraft after the planned modernization and maintenance on the ground;
- the periodicity of removal of the spacecraft from orbit for improvement, which is determined by the conditions of the change of epochs (approximately every five years) of communication devices;
- a system for launching and returning the spacecraft using an aerospace system (ACS) with a horizontal start and landing;
-AKS operation, maintenance and spacecraft modernization complex.


The GLONIS project is based on a combination of domestic technologies at the initial stage of development. The important point is the advanced creation of the theory of its construction and application.

Currently, 4G-LTE remains the predominant type of cellular communication, the next 5G era is at the stage of signal structure development. If the question of the possibility of satellite retransmission of a new spectrum is not resolved now, then 5G will take place only in the terrestrial version and there will be no space continuation. It is during the development of the signal structure that communication specialists should be interested in supporting this project. Otherwise, the Russian space segment of mobile communications will not take place and we will remain in the fiber optic era. Only an operated cosmonautics can lift 5G into orbit, because launching an experimental object, conducting tests and removing it from orbit for study, refinement and, if necessary, multiple tests using a reusable system will not cost as much as organized using a PH.

The operated cosmonautics should be under the auspices of the state, which provides relevant services for various IS. With such a formulation of the question, the private sector will invest in its development.

The main contradiction in the goals and objectives of the Russian cosmonautics is known: either deep space - and then we are talking about a rocket launcher (the heavier, the better), or near (economic) information space - and then traditional vertical-launch missiles are not so necessary. This is a question of the state national policy in space, and not the problem of a separate rocket corporation. If the goals and objectives will be determined and solved at the state level, there will be an operated cosmonautics in Russia.
More:

We are in Yandex Zen
What you didn't want to know about England
Shuttle Fighter
61 comment
Information
Dear reader, to leave comments on the publication, you must to register.