From the air deadlock

October 21 2015
54
"The state of civil aviation Of Russia. Flight safety. Personnel. Public Administration and Regulation ”- hearings on this subject were held in the Public Chamber of the Russian Federation.


The hearings in the Public Chamber were attended by members of the public councils of the Federal Air Transport Agency and the Federal Service for Supervision in the Field of Transport, members of the Expert Council in the field of civil aviation of Russia, representatives of trade unions, public and veteran organizations, enterprises and institutions of civil aviation, the State Duma and the Council The Federation, the Russian Union of Industrialists and Entrepreneurs, the Union of Transport Workers of Russia, the presidential administration, the government, interested representatives STV, other executive authorities. The reports of the Chairman of the Public Council under the Federal Air Navigation Agency Peter Deinekin and seven co-reports of leading experts of the industry were heard.

The Public Chamber notes that in recent years, civil aviation in Russia has achieved some success:

- The volume of domestic airline traffic in 2014 increased to 93 million passengers;
- Russian airports served 157 to millions of Russian and foreign citizens;
-for the development of the regional route network in 2014, the state allocated 3,58 billion rubles. Subsidies covered 130 domestic routes between 80 cities of the country. The total air transport subsidy for the five programs amounted to 8 billions 700 million rubles;
- introduced 13 routes for the development of communication with the Republic of Crimea;
- during the Olympics 2014, more than six thousand flights to Sochi were exemplary performed, about 400 thousands of passengers were transported;
- a system of aviation education has been maintained, the material and technical base of universities and colleges of civil aviation has been strengthened. In recent years, 320 training aircraft and modern simulators have been acquired. The number of students in educational institutions GA is about 25 thousands;
- successfully introduced a new (more dense) vertical separation system, the traffic intensity in the Russian airspace has increased one and a half times in five years;
- From 2007 to 2015, seven federal state-owned enterprises were established, including 67 airports and landing sites in the Far North, Siberia, and the Far East;
- reconstruction and construction of federal airports will be carried out. In 2014, 73 billion rubles were allocated for these purposes, of which 34,6 billion - from the federal budget, 38,4 billion - from other sources.

From the middle of 2014, the growth rate of air travel began to decline, reaching zero in December. Almost every second airline has completed a year with a negative financial result. For Transaero, No. 2 in Russia in terms of air traffic, the situation turned into a crash.

Losses from the industry of air transport activities in the 2014 year on domestic lines amount to 32 billion rubles. 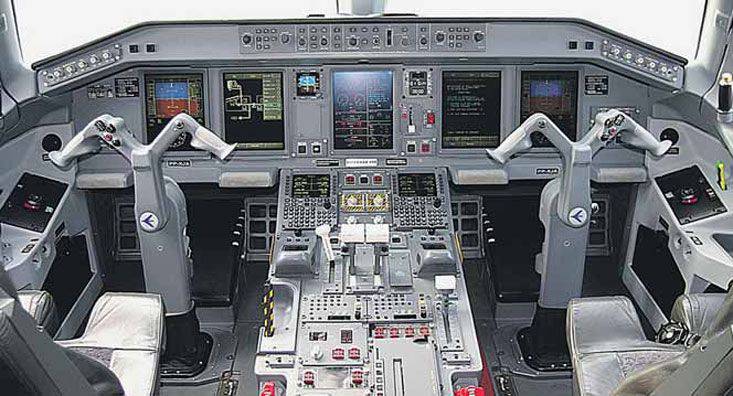 The decline in air traffic continued and reached nine percent in the first four months of 2015. For example, about Transaero flights have sold about 650 thousands of tickets with a total value of about 10 billion rubles. Nevertheless, the air carrier (after the companies UTair, Vladivostok Avia and others) goes through a bankruptcy procedure. Russian tour operators have already recorded the resulting increase in air ticket prices. For example, a flight from Moscow to Blagoveshchensk costs now thousands in 22, thousands in Magadan - thousands 32, and in Anadyr - 68 thousands of rubles.

The country does not currently have a national civil air fleet. In Russian airlines, more than 90 percent of all passenger commercial air transportation is carried out by about 900 long-haul aircraft of foreign production. They are not Russian property, the vast majority are leased from foreign enterprises. In recent years, 700 foreign-made helicopters have also arrived in our country. These aircraft are registered in state registers of other countries. Foreign sanctions can stop their operation at any time and create a collapse in the country's air transport system.

Who is at the helm?

The current situation allows us to conclude that the air fleet structure formed spontaneously over the past 25 years is the greatest threat to the stable operation of the industry and the national security of the country.

The Ministry of Transport has not defined acceptable safety performance indicators, as required by the government decree “On Approval of the State Civil Aviation Safety Program for Civil Aviation Aircraft” (No. 641-r dated May 6 on 2008). Target levels and safety performance indicators have not been established in the state, and the official responsible is not defined.

The aforementioned state program requires updating and re-approval in connection with the entry into force of the 2013 Annex “Safety Management” to the Convention on International Civil Aviation since November 19.

In connection with the decline in transportation in the current period, the number of flight and engineering staff, which is a strategically important personnel potential, sharply decreases in airlines. For 2014 – 2015, about a thousand highly qualified pilots were reduced, however, contrary to public opinion, an article of the Air Code of the Russian Federation was introduced, allowing companies to hire foreign nationals as 500 pilots as aircraft captains.

Further strengthening of the educational base of universities, flight and technical schools of civil aviation, and an increase in the funding of the educational process are required. At the same time, the reforms proposed by the Ministry of Education and Science do not take into account the features (difficulties) of the initial flight training process and harm the specific system of training flight personnel.

Despite the measures taken by the state and business to develop infrastructure in connection with the World Cup, the overall situation with the country's airport network remains unsatisfactory.

The total number of airports and airfields in Russia has decreased five times - from 1450 (in 1991) to 287 (in 2015). The closure of small but socially significant airports and airfields occurred where there is no alternative to air transport: in Siberia, in the Far East and the Far North. The volume of traffic on local airlines currently accounts for only eight to nine percent of the total number of air passengers in Russia.

The lack of stable air traffic in these regions creates difficulties for the population and impedes the realization of the right of citizens to free movement (Article 27 of the Constitution of the Russian Federation).

The current system of state administration and regulation does not meet the requirements of ICAO and is an inhibiting factor in the development of civil aviation. If there are serious internal and external challenges, this structure does not cope with ensuring stable work and intensive development of the industry.

Today, there are four government agencies operating in civil aviation in Russia, the interaction of which is not established, and the functions are not demarcated. None of these structures is responsible for flight safety.

The work of the Department of State Policy in the Field of Civil Aviation, which was not coordinated with the above government bodies, led to serious flaws in the legislation. The development and implementation of regulatory legal acts are carried out at a low professional level, apart from the real activities of airlines.

A significant amount of air travel, the vast territory of the country, the presence of hard-to-reach regions, the harsh climate, the needs of society and the real economy in high-speed transport, the need to integrate into the global system, ensuring flight safety in accordance with international standards, eliminating dependence on aircraft imports, maintaining the air business and Ultimately, the security interests of Russia urgently require the creation of a single competent authority to manage, regulate and reconstruct ety of Civil Aviation.

Great concrete work is needed on import substitution of the entire civil air fleet. This is hardly feasible only for the Ministry of Transport and the Ministry of Industry and Trade. It is necessary to consolidate the efforts of many branches of government, departments of the federal and regional levels, the aviation business and the public.

Based on the above, the Public Chamber recommends that the government:

1. Develop and introduce a draft Federal Law on Amendments to the Air Code in order to bring it in line with the Convention on International Civil Aviation.

2. Develop and adopt the State Aviation Safety Program (in accordance with the requirements of Annex 19 “Flight Safety Management” to the Convention on International Civil Aviation).

3. Form the system of state administration and regulation of civil aviation in Russia in accordance with the requirements of ICAO. To form a single body in the format of the Ministry of Civil Aviation or another federal executive body that reports directly to the government of the Russian Federation.

4. Adopt an updated State Program for the Development of Civil Aviation to 2030, providing for the creation of the necessary legal and economic conditions for solving the problems of civil aviation, linked to the regional development programs of the country, with a detailed “road map” of its implementation for each year.

5. Develop measures of import substitution and begin their implementation.

6. Strengthen the training base of universities, flight and technical schools of civil aviation on the basis of increasing funding and updating curricula.

7. To create the Aviation Collegium under the Government of the Russian Federation, whose competence is to include coordination of the entire technological cycle from the development to the end of the operation of aviation technology in order to cover the areas of activity of all suppliers established by the Flight Safety Management 19 Annex to the Convention on International Civil Aviation.

We are in Yandex Zen
List of destroyed the largest and most high-tech enterprises
Vladimir Putin: Democracy and the quality of the state
54 comments
Information
Dear reader, to leave comments on the publication, you must to register.