Su-30M and F-22: advantages and disadvantages

October 24 2015
101
Russia sent at least four Sukhoi Su-30SM modern aircraft to its base near Syrian Latakia. This is another batch of military equipment deployed by Russia in this Arab country destroyed by the war. And she sent to Syria Tanks, armored personnel carriers, heavy artillery and considerable infantry forces.


Apparently, the Russian troops deployed in this region have the task of supporting the weakened regime of Bashar al-Assad in the fight against ISIL. But without close cooperation with the United States and the forces of its allies, which operate in the region, there is a real danger of unintended confrontation. That is why US Secretary of Defense Ash Carter phoned his Russian counterpart, Sergei Shoigu, to rule out the accidental conflict between US and Russian forces. "The defense ministers talked about areas where the United States and Russia have close positions, and about where they diverge," the Pentagon said in a press release. The time for the call was chosen very unfortunate, since the Su-30CM fighters appeared in Syria several hours after this conversation. 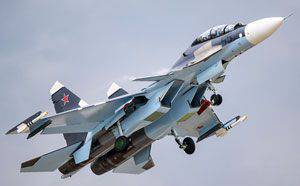 The fact that Russia has sent Su-30CM to Syria is quite logical. This aircraft carries a powerful combat load and has an excellent range. Moreover, it is multipurpose and can be used both in aerial combat and in the fight against ground targets. And this means that he does not need combat escort fighters. In addition, the crew of the Su-30CM consists of two people, which is very useful when performing complex tasks. For the same reason, the US Air Force F-15E Strike Eagle aircraft and the US Navy F / A-18F Super Hornet, which are in many respects direct analogues of the Su-30CM, are also two-seater.

Although the Russian forces can play a significant role in maintaining the Assad regime, in the unlikely event of a clash with American troops, the Su-30 handful will have little chance and they will hold out for a short time against overwhelming American superiority. The US forces in this region have a rich arsenal of modern fighters, the most powerful of which is Lockheed Martin's F-22 Raptor. Moreover, the American forces in the Middle East region have a huge numerical superiority over the Russian ones.

Although the Su-30CM is a very efficient fourth-generation fighter, it has no chance against the Raptor, especially if the air combat is out of line of sight. The F-22 has literally all the advantages with the exception of range and combat load. The combination of stealth and detection devices will lead to the fact that Russian planes are likely to be destroyed even before their pilots realize that they have become a target. During regular flight training in the USA, a group of four F-22 fights 20 enemy planes so that the pilots can acquire useful skills.

The only unpredictable moment is if there will be an air battle between the US and Russian aircraft in the visible range. In such a battle, the Su-30 has some chances to resist the F-22. He has a missile with a passive infrared rejecting homing head P-73, while the Raptor is armed with an outdated version of the Sidewinder AIM-9M rocket - for now. Of course, the excellent performance of the F-22 can compensate for this drawback, but the lack of missiles with passive infrared deflected homing heads on an American aircraft is a serious miscalculation that the US Air Force hopes to eliminate in the coming years.

“Raptor” is sure to inflict a crushing defeat on the Russian Su-30CM, but if an armed clash occurs between the armies of these two states, it will become a nightmare on a global scale that no one wants to try. The result will be a powerful escalation of tensions, which is very easy to get out of control and lead to a serious war. Let's hope that doesn't happen.

Ctrl Enter
Noticed a mistake Highlight text and press. Ctrl + Enter
We are
An-12 in AfghanistanStavatti Aerospace - New player on the margins of the military-industrial complex of the USA or another Pentagon duck? PART-1
101 comment
Information
Dear reader, to leave comments on the publication, you must to register.