October 21 2015
64
For a break in the course of the war, ammunition, military advisers and diplomats are needed


The offensive of the Syrian army in the province of Hama slowed down. In other areas, the activity of Islamists is increasing. The stabilization of the front is fraught with the loss of chances of a quick turnaround in the course of the war. It is necessary to radically increase the combat capabilities of the Syrian army and increase the grouping of the Russian aviation to a level that ensures an offensive with a high pace in at least two or three main directions with the stability of defense in others.

The factor of suddenness of Russia's entry into the war in Syria has largely ceased to operate. First, the militants recovered from the shock and adjusted the techniques and methods of warfare. Secondly, it turned out that the Russian air strikes on the enemy’s infrastructure had a less significant impact on its combat capability than expected. The main result of the bombing was the lack of ammunition at the disposal of terrorists. But already on October 12, the United States transferred about 50 tons to them weapons (ostensibly to the formations fighting against the IG, but these are the same radical Islamists). Attacks on the command posts of the operational level (and a higher level) did not lead to a noticeable disorganization of control. Third, it is already clear that successful actions within a separate operational direction are not enough to turn the tide of the war. Fourth, the leading role of field artillery in defeating the enemy was revealed. When a barrage of fire fell on its front edge, the Syrian army was advancing at a high rate. As soon as the artillery support decreased (probably as a result of the expenditure of the main part of the ammunition), the advancement of the government troops slowed down sharply, despite the tripling intensity of the strikes of the Russian aviation. Without increasing the number of groups of our VKS, increasing the impact on the IG is no longer possible.

Headquarters fire is not as effective

In order to assess the impact of Russian strikes on the control system of the militias of the Islamic State, it is necessary to deal with its construction and operation, and also consider the tactics of Islamist actions in Syria. Their troops are almost completely irregular. First, they represent a conglomerate of relatively independent, small in size groups, each of which has its own specific structure. Secondly, technical equipment and weapons are very diverse without any standardization. Thirdly, the level of controllability of these detachments by higher authorities is much lower than in regular troops. The commander, having received a combat mission, is far from always able to perceive it in the way that his superior understands it, and will not begin to carry it out in all cases: he may refuse if he considers it to be “incorrect”. Fourthly, the tactical training of the commanders fully meets the requirements of the guerrilla warfare, but does not allow organizing and maintaining interaction with a large number of heterogeneous groups in complex forms of warfare. Fifthly, with a high degree of autonomy, terrorist units are able to conduct relatively long military operations in isolation from the main forces, relying on their own and local resources, captured weapons. Accordingly, each of these formations has its own arsenals, sometimes mobile. Sixth, military equipment, despite the fact that a lot was seized at the warehouses of the Iraqi army and in Syria, is used very limitedly, especially armored. This is determined by the high dependence of its actions on centralized supply in very large volumes, the lack of a sufficient number of trained personnel for its operation, spare parts and components, which makes it impossible to maintain serviceability.

The authorities at the strategic level formulate tasks for a relatively long period of time with an approximate designation of the composition of the forces and means involved in their solution. Here, the main function is to provide armed formations with material and other resources. The management bodies of the operational unit (zones and areas) determine specific tasks and distribute the forces allocated for their solution. They also organize the material and technical support of the preparation of individual formations for combat operations. The issues of organizing interaction, preparation of operations and others are stipulated in the most general form, the detailing is left to the commanders of the tactical level.

Monitoring of the course of combat operations, updating of operational and strategic tasks are carried out as the situation changes. From the nomenclature of technical means of control, the armed formations of the Islamic State have mainly mobile devices.

Analysis of information on the status of the management of the IG, especially the operational and tactical links, allows to make a conclusion about a well-established system of replacing defeated commanders and intercepting controls by the authorities that have remained capable of replacing those that were destroyed without a significant decrease in efficiency. The exact temporal indicators characterizing the ability of the system to recover are unknown. Yes, they can not be - too diverse in composition and preparation of these formations. However, by analogy with the partisan movement in the USSR and data on the activities of the Mujahideen in Afghanistan, it is possible to estimate the recovery time of disturbed control of the armed units of the IG at the tactical level on average from three to four hours to a day, in the operational one - from three several days to a month. At the same time, restoration means not just the appointment of a new person to the position, but also the transfer of the entire system of relations, including personal ones, to him, without which it is almost impossible to manage the unsuited people, sometimes politically and even personally motivated militants. This is especially true for the higher links of the IG. The personal relations of its leaders with external sponsors and allies serve as a kind of guarantee for the observance of the course to be set and for the curators to be controlled.

Where do the forces come from

Now it is possible to establish at least assessed the impact of Russian aviation strikes on the combat capability of the IG. First of all, it should be noted that judging by the location of the affected control points, as well as their stationarity, they mainly relate to the operational or operational-tactical level. Probably, most of the functions performed by them have already been transferred to others who have retained their performance or newly formed. So by now the management has been broken only in the area of ​​responsibility of three or four points. And while it is not fully restored. This can be judged by the reaction of the IG troops. There is no response from the operational scale of the terrorist formations. 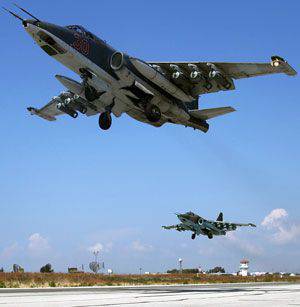 Destroyed weapons and ammunition depots are also likely to be operational. The impact of their destruction on the fighting capacity of Islamist formations will only affect a week or more from the beginning of intensive hostilities, which, in fact, is observed today. But due to the maneuver of reserves, Islamists can neutralize the consequences of the destruction of these warehouses. It is also possible to compensate for the loss of weapons due to overseas purchases, foreign deliveries (the United States has already announced a buildup of aid and weapons of ammunition from the “moderate opposition,” the fighters of which easily go into the IS) or the seizure of trophies.

The destruction of more than 120 units of military equipment directly affects the combat capability of those parts of the "Islamic state" that use it. However, the share of those is small. In addition, probably most of this technology is not capable, otherwise it would be in the army. Its destruction reduces the potential of IG formations by about 10 percent. The destruction of repair enterprises and workshops is equally affected, and not immediately, but after some time, an estimated two to three weeks.

Summing up the application of the Russian group of VKS in Syria, we note that the actions of our pilots deserve the highest praise. The number of objects destroyed in comparison with a relatively small number of combat missions significantly. As a result, a decrease in the combat capability of the IG troops can be estimated at 10 – 15 percent mainly in the province of Hama. The possibilities for the operational maneuver of the enemy due to the disorganization of the control system are significantly limited. This factor, combined with the transition of Russian aviation to the bombardment of fortifications and IS troops in its defense zone just before the attack of the Syrian army, as well as large-scale and exceptionally intensive fire engagement of the enemy with artillery (made possible by creating a significant reserve of ammunition, obviously, due to deliveries from Russia) allowed in a short time to solve the problem of defeating a part of the armed forces in a specific operational sector.

However, the subsequent sharp deceleration of the pace, threatening that the offensive will completely drown, indicates the need for urgent measures to radically change the course of the war not in one, but in several key areas. This is feasible if it is possible to radically increase the combat capabilities of the Syrian army so that it can conduct offensive operations at a high rate on at least two or three main operational areas, while maintaining the stability of the defense on others. The number of groups of Russian aviation must be brought to the level at which it will be able to act simultaneously on three or four operational areas with an intensity not lower than that shown today in the north.

The Syrian army’s combat capability can be radically increased primarily through large-scale deliveries of ammunition, weapons and military equipment. Outdated samples are also suitable, which should be transferred free of charge. They are no less effective against irregular formations than modern ones. Essential for Damascus could be the direction of a sufficient number of military advisers who will help restore controllability, combat and operational training, and the moral and psychological potential of the Armed Forces. After all, Syria has a large army, which is estimated to have up to 260 thousands of people, a few more tens of thousands in the Kurdish militia and Hamas. These forces are enough to defeat the IG and other opponents of the legitimate government of Syria. They are hampered by a low level of training of commanders, weak interaction, especially by the Armed Forces of Syria and other formations, as well as an acute shortage of weapons, ammunition and fuel and lubricants.

For the required operational capabilities of an aviation grouping, its strength must be increased in the near future to 100 – 140 vehicles involved in strikes against ground targets. There is a problem of home provision and logistics. But it can be solved by increasing the operational capacity of the Russian air base in Syria and creating a new one. It is very promising to use the Iranian airfield network for basing front-line aircraft of Russia. For attacks on the infrastructure of the Islamists can be brought Tu-22М3. A load of seven to nine tons allows them to have a combat radius of approximately 2500 kilometers, that is, using the airspace of Iran and Iraq, to ​​work from the Russian Caspian Sea. It is worth trying to bring to blows on the Iranian Air Force fighters. The latter are quite numerous, and the aircraft in their armament, even if they are very outdated, such as the Fantom-4 F2E, would make a tangible contribution to the defeat of the Islamic State. However, in order to succeed in the last three areas, additional and very substantial diplomatic efforts are needed, including to justify Iran’s open intervention in the war against IS.