Experts from 15 states, representatives of the SCO, CSTO, and other organizations took part in the International Conference on Afghanistan held in Moscow. Her work was covered by more than a hundred media. Great interest was aroused by the speech of the Deputy Chief of the General Staff, Sergei Istrakov. He spoke about the joint work of the defense departments of the SCO countries to stabilize the situation in Afghanistan and Central Asia. The article prepared for the "MIC" covers these issues in more detail.

Analyzing the situation in Central Asia, it is worth listing at least the main threats to regional and international security. This is primarily the growth of the terrorist activity of the Islamic Taliban movement and other radical organizations and the expansion of the influence of ISIL on the territory of Afghanistan, which is accompanied by effective propaganda of extremist ideology among the population, leading to the replenishment of bandit groups. The situation is characterized by escalation of instability and the possibility of internal armed conflicts in the region. There is an increase in the volume of drug trafficking from Afghanistan to neighboring countries, which is the economic and financial basis for the anti-government activities of extremists. The main threats include attempts by Western countries to interfere in the internal affairs of Central Asian states.

“Security in Afghanistan can be ensured only by the forces of the citizens of this country. No outside intervention will solve the problem. ”
The members of the Shanghai Cooperation Organization make independent efforts to neutralize threats to regional security, conducting unilateral measures of an economic, political, social and humanitarian nature. But such attempts do not effectively counter the new challenges.

On the example of the Syrian crisis, it is clearly seen that the efforts of the western anti-terrorist coalition do not bring results in the fight against ISIL precisely because the goals of the participants are different, the actions are multidirectional. In the end, it all comes down to a demonstration of active struggle.

On the other hand, Syria serves as evidence of how events can develop if collective actions are taken in a timely and coordinated manner. With regard to Afghanistan, the priority task should be formulated as follows: how to prevent it from being used as a tool to “swing” the situation in the SCO member countries.

The opinions expressed by experts can be reduced to several points. Firstly, security in Afghanistan can be ensured only by the forces of the citizens of this country. No outside intervention will solve the problem. Secondly, to ensure security, external assistance is needed, and it must be diverse in nature, from assistance in economic development to military-technical cooperation. Third, extremism cannot be eliminated without overlapping drug trafficking. Revenues from the trade in opiates create the economic base of terrorism, not only in Afghanistan, but also beyond. The SCO is a universal mechanism that is able to coordinate the activities of all the participants and the Afghan government to meet the challenges of ensuring security in the region. 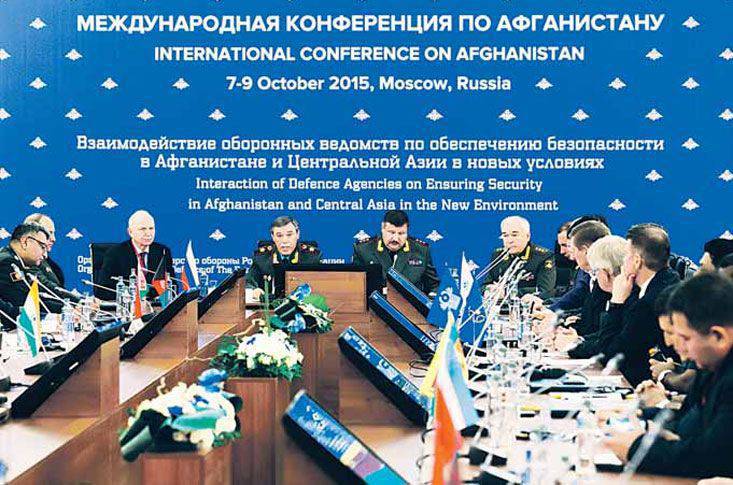 Photo: Vadim Savitsky
The evolving military-political situation and the forecast of its development show that the consolidation of efforts in countering and neutralizing the challenges and threats is vital. Therefore, the possibilities of the Shanghai Cooperation Organization are more than ever demanded. It is advisable to work out these issues in the following areas.

The first is the elimination of the spread of the threat of terrorism to the countries of the Central Asian region. To this end, this year successfully implemented measures to improve the coherence of our armed forces, strengthen confidence-building measures and understanding. In particular, in April, on the territory of Kyrgyzstan, a joint training of special forces was held in mountain conditions during the preparation of the military command and staff exercises "Peace Mission". In May, in Tajikistan, in the immediate vicinity of the border with Afghanistan, the military contingents of the Collective Rapid Reaction Forces of the CSTO took part. The results confirmed their ability to effectively carry out the tasks and give a fitting rebuff to gangs. In September, the Center-2015 strategic command and staff exercise was conducted, during which it tested the ability of the armed forces of the CSTO members to neutralize attempts by extremists to enter the Central Asian republics, as well as to repel the aggression of major terrorist groups. Russian-Tajik measures are regularly carried out to monitor the situation on the border with Afghanistan.

The second direction is the improvement of the information exchange mechanism between the armed forces of the SCO member states on the assessment of threats to regional security. As a perspective, the formation of the office of national military advisers under the secretariat of the organization or a special working group under the Council of Ministers of Defense is considered. It is supposed to entrust this body with interaction issues both with the national armed forces and with the Regional Antiterrorist Structure of the SCO, the CSTO, the CIS Antiterrorist Center. Through this device (working group), data will be exchanged about extremist organizations, illegal armed formations, methods and tactics of their actions. In addition, it is necessary to intensify multilateral cooperation in the area of ​​intelligence services of the Ministries of Defense in order to strengthen control over the actions of illegal organizations. Such forms of cooperation, of course, are of mutual interest.

The third direction is the exchange of experience in the preparation and use of military contingents in antiterrorist operations, including those conducted under the auspices of the UN and other international organizations, and the expansion of military-technical cooperation between the SCO countries, including educational aspects.

It should also be noted the need for measures aimed at increasing the combat skills of the military contingents of the SCO member states in the interest of countering new challenges and threats to regional security.

Today, more than ever, an analysis of the military-political processes in the area of ​​responsibility of the SCO is needed. Defense ministries must respond in a timely manner to threats emanating from the regions, especially the military, including by demonstrating the organization’s consolidated efforts. To this end, a joint anti-terrorist exercise of the armed forces “Peace Mission-2016” was planned to be held in 2016 on the territory of Kyrgyzstan. The military contingents of the SCO countries will work out the methods and methods of conducting combat operations to neutralize terrorist units and share their experience in fighting illegal armed groups.

Along with the economic, political, social measures, the member states of the Shanghai Cooperation Organization should intensify their opposition to Afghan drug trafficking. Of particular relevance is the implementation of the initiative to create a universal center for countering new challenges and threats on the basis of the SCO Regional Antiterrorist Structure. It is important to organize the cooperation of the future center with regional structures, first of all with the CSTO Anti-Drug Operations Center.

It is necessary to jointly stop the channels of drug trafficking, financing, the supply of weapons and material resources to extremist organizations that operate in Afghanistan.

Another way to stabilize the situation is to counter the ideology of extremism. Purposeful work in the information sphere, explaining the perniciousness of such views will deprive the leadership of the Islamic Taliban movement, ISIL units and other terrorist organizations to support and replenish the population.

It is very important to support the efforts of the Afghan authorities to achieve national reconciliation in the country. To this end, it is necessary not only to intensify the interaction of the military departments of the countries participating in the Shanghai Cooperation Organization, the Collective Security Treaty Organization, but also to use the political, economic, social potential of the CIS and the Eurasian Economic Union to improve the situation of the population, strengthen health care and other spheres of the state’s activities.

Only purposeful and consolidated work of all countries of the Central Asian region will help reduce the level of terrorist threat and prevent the spread of the influence of extremist organizations.

We are in Yandex Zen
Konstantin Syroezhkin: What should the SCO do if the US transfers the conflict zone to the Fergana Valley?
Article by Vladimir Putin in the newspaper "People's Daily"
6 comments
Information
Dear reader, to leave comments on the publication, you must to register.