October 23 2015
10
The domestic expert community proceeds from the fact that counteraction to various challenges and threats is possible only if Russia maintains the status of a great power, which it has been for centuries. But the existing pole world order is no longer able to maintain global stability, and new centers of influence are not yet ready for this. In such a situation, the Russian Federation must realize its chance to play a role dictated by its civilization model, the great history, geography and cultural genome. In the military and political terms, it is about creating a security and stability zone in Eurasia.


Although the scientific community continues a philosophical and political debate about whether Russia has the necessary and sufficient civilization resources to form in the post-Soviet space a new geopolitical center of integration, the need for the latter is no longer in doubt. Especially since integration military-political projects are being implemented and successfully developed, most of which are carried out with the leading role of our country.

This primarily concerns the Shanghai Cooperation Organization (SCO), the Eurasian Economic Union (EAEU), the Collective Security Treaty Organization (CSTO). However, the transformation of these integration projects into full-fledged military-political alliances is hindered by a number of problems. They are associated not so much with the countering of challenges and threats, as with the lack of a clear civilizational orientation. Russia, in addition to demonstrating its political, economic, military, and other capabilities, should formulate for the partner countries common value orientations emanating from historical sources.

The civilizational vector of development of new independent states can be focused both on the Western European democracies and on other political “constructions”. This choice will determine the system of socio-political, economic and other national priorities in the field of security.

Special mention should be made of the fact that the possible changes in the concealing world order are largely determined by the growing global economic and socio-political crisis. At the same time, in the West, the thesis that it is necessary to overcome the negative tendencies that the main national material resources (primarily hydrocarbon resources) are under international control is strongly promoted. Already in the medium term, we should expect to raise the question of introducing a regime of their forced distribution, including with the use of military force. In any case, Western experts are considering this option.

With the growth of military-political and economic instability in Eurasia, Russia will have to develop a new concept of integrating the post-Soviet space, which may require changes not only in relations between the CIS and CSTO, but also with other states of Asia and the Pacific. 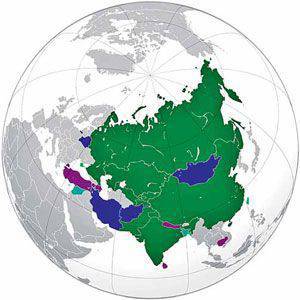 Keepers of Eurasia
Photo by wikipedia.org

It should be remembered that such integration involves the delegation of authority on war and peace to the supranational level, the development of common principles of behavior in the international arena, the search for allies in the defense sphere, clear stages of military construction, ultimately focused on the creation of a single defense space in the world or regional scale.

Previously it was assumed that the system of global international security will be created exclusively within the UN - an organization united from within by a rigid, internationally approved structure requiring execution and monitoring the implementation of any resolution (including with the use of military and other force sanctions). However, in practice, international law on security issues has become extremely selective, and the mechanism for using the UN is more often used against undesirable to the West (primarily the United States) countries and governments.

Under these conditions, the role of regional security systems is objectively increasing. However, on the way of their formation there are problems caused by high dynamism, inconsistency and even irrationality of the emerging world order. It simultaneously occurs the processes of globalization and growing national-state egoism, which separates humanity along different axes of “social coordinates” associated with the exhaustion of raw materials, the narrowing of a prosperous economic space, the growth of demographic, ethno-political and interfaith tensions and other factors leading to a clash of interests of various countries and peoples, aggravation of geopolitical rivalry.

In North Africa, in the Near and Middle East, a kind of “arc of instability” has already formed. Central Asia occupies a special place in it. As the countries of this region became independent in the early 90's, religion began to manifest itself there more and more conflict. Islamist groups got more leeway. And the ability of the authorities to control and suppress weakened.

Social tension can be a mechanism for escalating protest sentiments in Central Asia. The complexity of the ethnic composition, the overpopulation of many regions, the borders that repeatedly and arbitrarily moved in Soviet times, the struggle for regional leadership, the unsettledness of water use issues, etc., make the situation explosive.

Since NATO is concerned about the problem of stability in Afghanistan after the withdrawal of Alliance troops from its territory, we should expect more US attempts to involve individual CSTO member countries in joint actions in Afghanistan. In view of the above, it seems advisable to begin work on preparing the organization for a possible exacerbation of the military-political situation in Central Asia.

As a matter of priority, it seems necessary to clarify the existing and develop new doctrinal documents of the CSTO, specifying the development strategy of this organization, as well as approaches to interaction with other structures of international security.

Consideration should be given to endowing the CSTO with special powers to respond to the possible complication of the military-political situation in Central Asia. Given that the organization’s regulatory documents do not imply the participation of the Collective Rapid Reaction Forces in solving problems of an internal political nature, the main tasks of maintaining stability should be entrusted to the Collective Peacekeeping Forces. To this end, it is necessary to lift, in particular, the constitutional prohibitions of some states on the use of armed forces outside national territories. In addition, the CSTO should develop an agreed organization strategy in the Afghan area.

It is very important to bear in mind that in the event of an aggravation of the military-political situation in Central Asia, initiation from outside of the entry of a NATO peacekeeping force into the region under the auspices of the United Nations or the OSCE international police forces cannot be ruled out. Therefore, it is necessary to work out in advance the agreed positions of the CSTO member states on responding to such initiatives.

In connection with the exacerbation of the military-political situation around Syria, the possibility of creating security structures not only in the CSTO, but also in the Shanghai Cooperation Organization should be considered. Currently, it unites Russia, China, Kazakhstan, Kyrgyzstan, Uzbekistan and Tajikistan. Mongolia, India, Pakistan and Iran have the status of observers, who on 24 in March 2008 of the year submitted an official application to the secretariat for full membership. The SCO Charter was adopted, where goals, principles and main directions for the development of partnerships covering the socio-economic, humanitarian and military spheres are fixed. Moreover, cooperation in the field of defense is highlighted as one of the priorities, although the organization is not a traditional military-political bloc.

The SCO’s role in building a collective security system in Central Asia is determined not only by the aggregate territorial and demographic potential (the total area of ​​the member countries is about 30 million sq. Km, which is 3 / 5 in Eurasia, the population is 1,455 billion, that is, 1 / 4 humanity), but also the emerging strategic partnership of the two nuclear powers and the permanent members of the UN Security Council - Russia and China.

Now the SCO declares itself as a Eurasian organization of a universal type. It has made great strides in the development of international cooperation in the field of security, the establishment of operational cooperation (military exercises), as well as in the development of common political concepts. At the same time, the SCO has not yet made decisions on the possibility of transformation into a military-political bloc. The issues of creating international formations or unified command are also not yet raised.

The new version of the national security doctrine of the PRC states that China favors the concept of security based on mutual trust, benefit and coordination, does not seek hegemony and will not participate in armed expansion. In particular, it is not going to replace NATO in Afghanistan after the withdrawal of the international coalition forces. At the same time, China believes that, paraphrasing the well-known formula of Robert Browning, “America’s ability to reach out to something should not automatically give them the ability to grab it all.”

Russia and China are striving to create a security belt around themselves from friendly states whose goals and objectives are close to the CSTO, the EAEU and the SCO. The question of the deep integration of these organizations remains open. At the same time, the conflict of interests between the main geopolitical players of Eurasia and the Asia-Pacific region can be put an end to.

We are in Yandex Zen
Military reform as an integral part of the security concept of the Russian Federation: Systematic dynamic assessment
Vladimir Putin: Russia focuses on the challenges we must respond to
10 comments
Information
Dear reader, to leave comments on the publication, you must to register.