The whole truth about the strategy of Russia in Syria


Russians have once again proved themselves to be cool strategists. The Kremlin’s recent campaign in Syria took not only ISIS off guard, but also intelligence services and analysts of the West.

Russia's ability to change the strategic situation on the ground with minimal effort and maximum disguise is commendable. However, Moscow is struggling with ISIS by no means from noble motives. This is a practical question that is directly related to the national security of Russia.

Russia was contemplating the possibility of intervening in the Syrian conflict since at least 2013, when it first proposed replacing the Austrian peacekeepers on the Golan Heights with Russian ones. With 2013, Moscow has played a significant role in the removal of chemical weapons - At the same time, the first serious negotiations began with Damascus on the fight against radical Islamists. At the same time, Russia was engaged in a strategic military dialogue with Iraq, which resulted in signing the 4,2 billion deal with Baghdad for the supply of weapons in 2012 and the delivery of Su-25 fighters in 2014. In July, 2015, Russia negotiates with Iran to participate in the struggle of Syria against ISIS. From that moment on, the issue of attacking ISIS was no longer “if”, but “when” and “how”. And the Ukrainian crisis did not change Russia's plans; it only delayed the intervention a little.

At the heart of Russia's concern are security concerns. If we allow ISIS to establish control over Syria and Iraq, then in about five years, many well-trained terrorists will begin to return to the North Caucasus and Central Asia. Russia estimates that at least 5,000 of 70’s thousands of ISIS militants come from Russia and the CIS countries. From a strategic point of view, a campaign to destroy them in the Middle East will bring Russia long-term benefits at relatively low costs compared to the fight against terrorists in Russia.

Russian strategy in Syria includes two scenarios. The first involves limited participation in the Syrian conflict. Its advantage is that by spending the minimum amount of resources and not raising the bar high, Moscow nevertheless gets a lot. 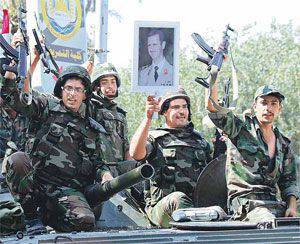 First, Russia can destroy the infrastructure of this terrorist group and prevent it from strengthening its influence, while there is no need to destroy it completely. North Caucasian terrorists in Russia were completely destroyed, but inside the “no-man’s strip” in Syria, they can build training camps and start exporting terrorists to Russia, as they did in Afghanistan under the Taliban.

Secondly, Moscow wants to maintain a friendly regime in Syria. In this case, Russia will be able to invest in its naval base in the Mediterranean and guarantee itself a major role in gas production projects on the Syrian, Cyprus and Israeli shelf.

Third, Russia is seeking to take the position of a leading power in the Middle East, capable of conducting effective military operations. Until now, no state, with the exception of the United States, could project power so far from its borders. In Syria, Russia demonstrated its ability to influence events in remote regions of the planet, and thus it changed the plans of the capitals of the Middle East. By hitting cruise missiles launched from the Caspian Sea by ISIL in Syria, Russia consolidated its presence in the region.

Finally, the Syrian operation is an opportunity to demonstrate in action Russian weapons, satellite communications and the GLONASS navigation system - their deadly effectiveness, high accuracy and reliability. This demonstration is aimed primarily at potential customers in the largest and continuing to grow arms market - in the countries of the Middle East. It also confirms Russia's ability to maintain full sovereignty in the event of war.

The shift of attention from Ukraine to Syria was not one of the main goals of Moscow, but since this is exactly what is happening as a result of recent events, we can consider this another achievement of Russia.

The tasks listed above are the minimum that Russia can count on if its bomb campaign runs smoothly. The top bar of the second scenario is much higher, in addition, it carries much more risks.

With the support of Syria, Iraq and Iran, Russia can hope for the complete destruction of ISIS in the region, including its militants from the CIS countries. If this goal is achieved, it can lay the foundation for restoring the traditional borders of Syria and Iraq and make them loyal allies of Russia in the future. Stabilization of the situation in Syria and Iraq will mean the emergence of conditions for the normalization of life in these countries. This will put an end to the migration crisis in the region and in the European Union.

However, achieving these goals implies the need to use much more resources and the participation of a more powerful coalition, which should include the Western powers and the Arab states of the Persian Gulf. In the absence of such a coalition, the targets of the second scenario will be more ambitious than the current plan of Moscow suggests.

Resource management in the framework of the war with ISIS

Does Russia have enough resources to implement its plans in Syria?

Moscow gained the full support of Syria, Iraq and Iran, so now it can act independently of the West. Russia's allies are extremely interested in defeating ISIS, and they tried to achieve this even before the intervention of Moscow. If we consider only numbers, then it may seem that Russia is making the smallest contribution to this struggle within the framework of its coalition, but in fact its participation is decisive.

Russia's military resources are enough to conduct an effective long-term campaign in Syria. Critics forget that Russia was directly involved in resolving conflicts in Georgia, Moldova and Tajikistan in the 90s, when its economy was going through particularly difficult times.

Moreover, the leaders of the Russian Sunni community (approximately 14 million people) support the initiative of the Kremlin and condemn the ideology of ISIS. In September, the largest Sunni mosque in Europe opened in Moscow, which further strengthened support from the Muslim clergy. At the opening ceremony of the mosque, Vladimir Putin expressed confidence that it would contribute to the spread of humanistic ideas, the true, genuine values ​​of Islam in Russia, and accused the so-called Islamic state of compromising the great world religion.

The Syrian campaign of Russia can bring it significant benefits. However, the risks associated with it are also high. The arrival of Russia to Syria was very spectacular, but the output can be quite a challenge.

First, Russia runs the risk of spoiling relations with an important regional partner - Turkey. Ankara is interested in assad leaving, and she uses the fight against ISIS to suppress Kurdish troops on the Syrian side of the border. Despite all the statements that the policy does not affect the economic ties between the two countries, the start of the ambitious Turkish Dream project was postponed until the 2017 year. This is not the first time that disagreements arise between Russia and Turkey on regional issues, but in the past they managed to avoid confrontation.

Secondly, Russia may be stuck in Syria, as happened with the Soviet Union in Afghanistan. That is why Moscow begins to act only after a serious study with the support of reliable regional allies and with a clear exit strategy. Having received a valuable lesson in Afghanistan and Chechnya, Russia prepared itself well for war with a low intensity of hostilities.

However, the biggest risk is that Russia may be drawn into a regional Sunni-Shiite conflict on the side of the Shiites. Considering the fact that a huge number of Sunnis live in the territory of the Russian Federation, Moscow should take special care. According to critics, the fight against LIH will force Russia to confront all the Sunnis in the region. However, this statement suggests that all Sunnis support ISIS, and this is not the case.

This leads us to the question of what the Syrian strategy of Russia currently lacks, namely, the issue of a viable Sunni opposition of ISIL. Having well learned the lesson learned in Chechnya, Russia will seek a solution to the Syrian conflict by negotiating with local influential leaders of the Sunni communities who are ready to join the fight against terrorists. If one of these Sunni leaders ultimately triumphs, he will fill the vacuum that ISIS will leave behind, as happened with Ramzan Kadyrov in Chechnya.

Applying the Chechen scenario to the situation in Syria is a rather difficult task, but it is the only way to achieve a full-fledged agreement in this war-torn country. That is why Russia considers the French proposal to unite the forces of the Syrian government with the “healthy opposition” in the Free Syrian Army as an “interesting idea” that should be considered.

We are in Yandex Zen
Military reform as an integral part of the security concept of the Russian Federation: Systematic dynamic assessment
Nikolay Silaev, Andrei Sushentsov: Georgia after the elections and prospects for Russian-Georgian relations
21 comment
Information
Dear reader, to leave comments on the publication, you must to register.