Tactics of the Syrian General Staff raises a number of questions 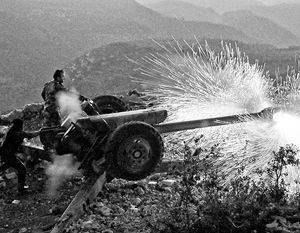 The confrontation in Syria in some places has taken the character of a war of “all against all,” but this does not prevent the government army from developing the well-being of the Russian aviation offensive in a number of key areas. Another thing is that success is heterogeneous and ambiguous. And although the strategic goals of the Syrian general staff are quite obvious, the methods for achieving them sometimes raise questions.


After several days of lull caused by the artificially halted offensive of government forces, fighting in Syria resumed in several key sectors at once. The events around Aleppo brought newness to what is happening, where, for the first time since the beginning of the Russian operation, the opposing sides vividly demonstrated what the “war of all against all” means in practice and how it all ends.

It began with the fact that the pro-Western rebels (the name is conditional: there are Islamists mimicking “democrats” and semi-mythical “secular liberals”) were forced to re-group their forces by transferring units from under Aleppo to the “Homsky front”, where the offensive of government forces if it were a little better organized, it could well overturn them altogether. Parts of the Islamists and the “Westerners” were filmed mainly from the positions north and north-west of Aleppo, where they did not undertake anything active, preferring medieval tactics of siege the fortress.
The ISIS units immediately poured into this weakened zone and, on the backs of the “Free Syrian Army” that had run, took up “serfs” positions around Aleppo. The city and its adjacent territory have been in a circular siege for more than three years, the only difference is that for some time Aleppo and the surrounding area were mainly terrorized by pro-Western forces, and only in the last 10 months the ISIL fighters were drawn to them from the east. The panicked cries that the radicals "are standing on the rails of the Aleppo tram" (there is no tram there - and there has never been, this is just a figure of speech) - is an exaggeration. In the line of sight of the residential areas of Aleppo, the besiegers are crowding, we will repeat, a long time ago, and the appearance of “black flags” in the area of ​​the cement plant did not fundamentally change anything.

Another thing is that the logic of the behavior of government forces initially comes down to lifting the blockade of Aleppo, creating a solid front and restoring a full supply of all the blocked major cities and regions, including by destroying enclaves of armed opposition of different ideological and religious affiliation. Hence, the constant attempts to attack on various, often not directly related sectors of the fronts.

And so, after the rapid advance of ISIS last week north of Aleppo, government forces finally came to action in this enclave. It should be understood that the forces of government troops in the area, which includes the full airfield Kuwaireis, are limited in supplies, and to lead from there a massive attack on ISIL is impossible without destroying militants in the actual rear. What was undertaken.

The troops began to advance in two opposite directions. First, from the region of Nasiriyah to the northeast, to the area of ​​the city of Buraij, in the direction of the base of Kuwairis. The distances there are small, and not mountains, but the plain is an agricultural region with a developed (by local standards) network of roads. The command of government troops apparently decided that ISIS, also now possessing a small margin of safety, is rapidly melting due to air strikes, advancing north of Aleppo, will further weaken its position around the airbase. It was not there.

Russian aviation (most likely, at the request of Damascus) was ironed by the attacking units of ISIL for several days, which apparently should have restrained them, but did not lead active air preparation directly in the offensive zone of Nasiriyah. As a result, government forces were able to enter Buraiju, where they stopped, as they did last week when they attempted to conduct an attack in the direction of Kfar-Nabuby on another sector of the front. The attack on Kuveiris, thus, ended, practically not having begun, and at the moment the attempts to unblock the air base were stopped.

At the same time, the triumphant advance of ISIS north of Aleppo, which lasted 24 hours, was indeed stopped by Russian air strikes, which (in this paradox of the “all against all” war) were beneficial to the pro-Western opposition who had fled; Further attempts by the Islamists to move to the position of the SSA ended in complete failure and dozens killed. The question of whether it was worth supporting an air attack from Nasiriy instead of “holding back” ISIS north of the city remains open. And this question should be addressed to the Syrian general staff, which selects the direction and timing of the attacks, while the Russian VKS only provide this whole thing.

The second offensive of the government troops from the Aleppo area developed much more successfully and even indicatively, but went in the opposite direction - to the south-west. It was a natural and understandable move: the troops began to break through their way to connect with the "main" front in order to release the zone of Aleppo. Relying on Azzan Mountain (the terrain there is flat, and control over Azzanum gave obvious advantages for an offensive using armored vehicles), Assad quickly advanced almost a hundred kilometers, occupying a dozen different settlements and operational importance. Moreover (and this is a very encouraging innovation), the offensive has not stopped and continues to this day, although its pace has slowed down. It is possible that the main operational target is Al-Khader, a large settlement and transportation hub, starting from which you can continue to move to join the front in the province of Hama.

At the front in this province, active hostilities in the area of ​​the "Latamin protrusion" and on the flanks near it actually stopped. On the other hand, government forces continued to advance quite successfully on the front a little to the west, in the valley of Al-Gab (formally, this is Latakia province, but the front is solid here, and the old administrative division of Syria does not matter). For the Syrian army, this is the normal rate of attack, although many could reasonably recall some representatives of the animal world, in particular, turtles. This offensive continues with a common goal on Jizr al-Shugur through Sirmaniyah and Karkor for a week and a half, all repulsed settlements being piles of ruins unfit for life. And what's next, only the drones know.


The offensive in the valley of Al-Gab is limited from the west by a mountain range, which for almost a week they have been trying to storm frontal through the town of Salma, which has been passed from hand to hand several times. This occupation is hopeless, because the war in the highlands will require special knowledge and skills that the cat seems to have cried from the government army. But from a political point of view, an offensive in the Al-Gab valley and an attack on the mountains are extremely important, since in the long term they will give direct access to the Turkish border or even isolate militants and their surroundings in parts throughout the province of Idlib. This embarrasses Turkey, since the supply of militants in such a situation can only be conducted through Turkish territory, which is unacceptable for anyone.

Another serious success was achieved in the province of Homs, where a large enclave of insurgents has existed and flourished for five years, in which several dozen small groups of various orientations were pressed together. Potentially, this enclave in the deep rear was a serious danger to Damascus. In addition, attacks were periodically carried out from it in order to cut off the communications of the government forces. Now the Assad troops, with the direct support of Russian aviation, have finally managed to dismember it in two. Most likely, the enclave will be finished up slowly and gradually, hanging a sign "for the funeral": in the current situation there is no point in throwing large forces, since it no longer represents such a danger as 7 – 10 days ago, when from the last time someone ran out, cutting the road Homs - Hama. There are directions and more important. The same deblockade of Aleppo, for example. Or fighting in the eastern suburbs of Damascus.

The offensive there is extremely slow, taking into account the harshest conditions of a completely destroyed infrastructure, broken residential and industrial buildings, and indeed, dense urban battles have never been a reason for vigorous reports. Government troops managed to recapture several quarters, counting the liberated territory has to be carried out in almost every house, but a positive trend is already visible. If two weeks ago it was believed that ISIS, Dzhebhat al-Nusra and now deceased Jaish al-Fatah were ready to seize the center of Damascus, now they are only sluggishly gnawing with “wandering mortars” and “technicals”, and they don’t even think about the attack.
Something similar is happening on the very peripheral - southern and south-western - fronts. The appearance of Russian aviation was preceded by several local attacks of Islamists in the Deraa region and on the Golan Heights, but now the government army has stopped all these enemy achievements and slowly began to beat the lost back.

The “first speed” of what is happening has already become somewhat straining, but apparently the solution of one or, with God's help, several large front-line tasks will be able to radically change the balance of forces. Now, no frontal offensive by government forces against ISIL is possible without solving problems in the rear, the de-blockade of Aleppo, the Kuwaireis base, the elimination of enclaves and access to the Turkish border (Golan Heights can wait). And we'll see.

Ctrl Enter
Noticed a mistake Highlight text and press. Ctrl + Enter
We are
About Stalin and KhrushchevWhat you didn't want to know about England
105 comments
Information
Dear reader, to leave comments on the publication, you must to register.