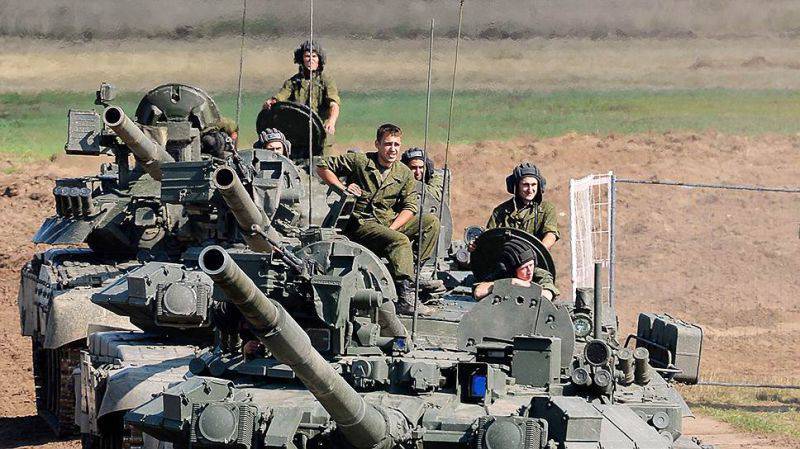 Gunsmith export has been and remains for Russia not only a profitable business, but also a very sensitive area of ​​international relations. The "authorities" understood how the arms trade process had changed in recent years, which slowed it down and, on the contrary, pushed it.

According to Vlast, by the end of the year - presumably in November - President Vladimir Putin will hold a meeting of the commission on military-technical cooperation (MTC) with foreign countries, at which he will sum up the preliminary results of the year in the field of arms exports. According to the Federal Service for Military-Technical Cooperation, over the past 11 years, Russian arms exports have tripled - from $ 5 billion to $ 15,3 billion, while the order book has steadily kept around $ 50 billion. The rapid growth has occurred against a variety of problems. However, there is almost no doubt that the previously achieved figures will remain at least in 2015: the unstable situation in the Middle East and the awareness of the real threat from the actions of the Islamic State terrorists contributed to the intensification of relations with old partners and led to the emergence of new customers.

Today, Russia is bound by military-technical cooperation agreements with more than 90 states, and solid arms contracts have been concluded with at least 60 countries. Despite the impressive figure, most of the revenues accounted for only a few of them - the major players such as India, China, Algeria, Venezuela and Vietnam traditionally were customers of Russian equipment and weapons. More recently, countries like Egypt and Iraq have joined them. But even such a set of clients makes it relatively easy to hold the second position in the global arms market with a share of 27%, only the United States skip ahead - this figure is 31%.

Over the past few years, the arms market has undergone significant changes. Leadership has changed in a number of friendly states, which, according to a source from Vlast, close to Rosoboronexport’s Russian weapons exporter, are almost always fraught with problems: “You can enter into a good contract only in one case - who knows you personally. " The emergence of a new leadership in the country in some cases is indeed critical, since negotiations have to start virtually from scratch because of his unwillingness to assume the obligations of predecessors, confirms another top manager of the Russian defense industry enterprise. 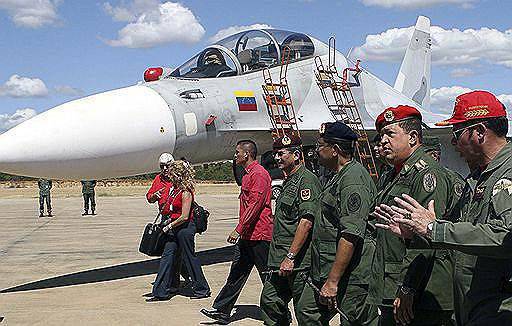 Under Hugo Chavez (pictured), Venezuela decided to purchase Russian weapons worth about $ 4 billion; his successor as president reduced the scale of military-technical cooperation with Russia
Photo: Miraflores Palace / Handout, Reuters

For example, this happened to Venezuela after the death of Hugo Chávez and the arrival of Nicolas Maduro. If at the first 12 contracts were signed with a total amount of up to $ 4 billion (for Su-30 MK2 fighters, Mi-17В, Mi-35М, Mi-26Т helicopters, as well as Tor-M1E, Buk-M2E) ", C-125" Pechora-M "and the newest -" Antey-2500 "), then at the second speech on a similar scale did not go: in 2014, the experts managed to identify only one contract - to repair ten Mi-35М helicopters. “Under Chavez, we concluded a large package contract, and what is now being served as a recession in relations is just the completion of deliveries under this contract,” Anatoly Isaykin, general director of Rosoboronexport, told the Kommersant newspaper. True, in it, he acknowledged that the cooperation "though not in such a volume", but will continue if Venezuela copes with the difficult economic situation inside the country.

With India, the situation was somewhat simpler: after the arrival of Narendra Modi, the two countries seemed to remain at a high level (28% of India’s weapons purchases in 2014 were in Russia), but Delhi now focuses on diversifying military suppliers without getting hung up exclusively to Moscow. For example, the Indian Ministry of Defense has chosen the French Rafale aircraft to the MiG-35 medium-sized fighter aircraft, and the military chose the South Korean KHNUMX instead of the hundreds of Russian Msta-S self-propelled artillery mounts. Egypt, according to Vlasti sources, was the exception rather: under President Abdel al-Sisi, a package of contracts worth at least $ 9 billion was signed (it includes deliveries of several divisions of the Antey-3,5 and Buk- M2500E, helicopters, portable Cornet-E anti-aircraft missile systems and other types of weapons), but this was done after top-level talks with Vladimir Putin.

Due to the high cost of the Russian proposal with the AK-103, the Vietnamese military chose the Israeli version with Galil ACE-31 and ACE-32 rifles.

The second problem was the sharply increased competition in the arms market. Top managers of enterprises of the Russian defense industry admit that selling their products has never been easy, but now they regard the previously existing word “competition” as synonymous with “slaughter using the dirtiest methods”. Due to political differences between Russia and the United States regarding the situation in Syria and its President Bashar al-Assad personally, Washington repeatedly put up obstacles in Moscow: for example, took licenses from ships carrying Damascus repaired helicopters or blocked making dollar payments on signed contracts. In Rosoboronexport, this was referred to the category of “minor pranks”, but recognized that the attempts to insert the sticks into the wheels became “much more concentrated and cynical”.

It is worth noting that difficulties in the PTS arise not only for some political reasons, but also for purely commercial ones: this was the case, for example, with a tender to build a plant for assembling Kalashnikov submachine guns in the interests of the Vietnamese Ministry of Defense. Due to the high cost of the Russian offer with AK-103 (about $ 250 million), the Vietnamese military chose the Israeli version with Galil ACE-31 and ACE-32 rifles (about $ 170 million). Sources involved in the arms business urge not to dramatize the situation too much, saying that the loss of the tender is expressed only in lost profits, and not in real money. In addition, they add, taking into account the increased exchange rate difference of the dollar, revenues from realizing contracts doubled: if five years ago $ 1 billion was about 30 billion rubles, now it is already over 60 billion rubles.

The third problem that Russia has not really felt in the arms market yet, but in the future there are all the prerequisites for this, was the fall in energy prices - in the second half of 2014, the countries - oil exporters began to more carefully assess defense expenditures. Since the money for the projects being implemented was pawned in advance, this did not have a special impact on the execution of already signed contracts: last year Algeria ordered two diesel-electric submarines of the 636 project worth about $ 1,2 billion from the Russian Federation, and in April 2015 of the year - also a batch of Su-16MKA fighters from 30, now a contract is being prepared for several divisions of the Antey-2500 system. Most recently, Saudi Arabia has begun negotiations on the acquisition of operational-tactical missile systems "Iskander-E", but when it comes to signing a firm contract, the interlocutors of "Power" are not taken.

At the end of September, Sergey Chemezov, director general of the Rostec state corporation, commenting on the start of the air operation of the Russian armed forces in Syria against the Islamic State, said that "when the situation in the world worsens, orders for weapons are always are increasing. " According to Ruslan Pukhov, director of the Center for Analysis of Strategies and Technologies, an active growth of interest in Russian weapons began after the operation to force Georgia to peace in August 2008, when Moscow showed that it was sufficiently an "independent decision-making pole."

In fact, the escalation of the conflict really generates, if not a strong demand, then an increased interest from foreign customers, says the Vlast source in the military-industrial complex: better advertising for military equipment than participation in real hostilities, "even against terrorists" hard to come up with. True, the return from such advancement will not be immediately felt: even if someone is interested in acquiring such weapons (Su-30 type aircraft or Mi-35 helicopters), then from the moment of signing the contract and before the first deliveries (taking into account the production cycle) not one year. For example, the 2007 fighters MiG-12М / М29, which the Syrians contracted in 2, could well now participate in an operation against terrorists from the Islamic State, but first due to technical problems, and after the civil war started in Syria could not be at the disposal of the pilots of the army of Bashar al-Assad to the 2012 year, and their transfer was shifted to 2016-2017 years. 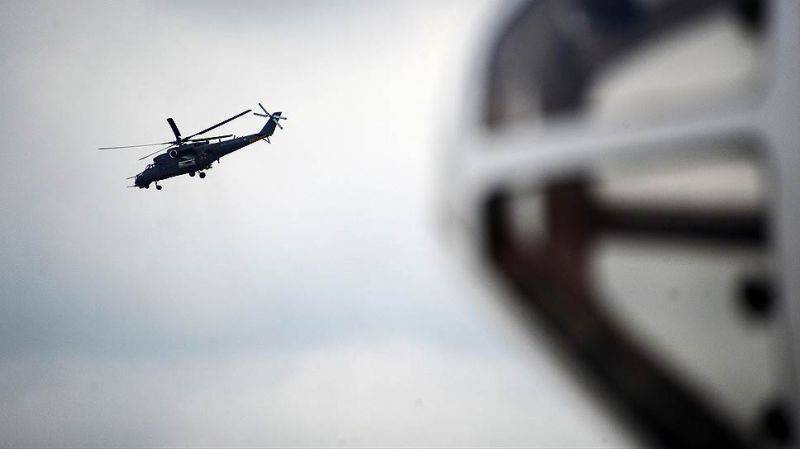 During the Russian war against IS, Russian planes and helicopters are closely watched not only by politicians, but also by the military — potential buyers of weapons for their countries
Photo: Alexander Scherbak, Kommersant

Many potential customers would like to receive the desired equipment much earlier, if not immediately. In some cases, Russia is ready to meet, passing military products from the presence of the Ministry of Defense of the Russian Federation to the interested party. According to Alexander Fomin, Director of the Federal Military-Technical Cooperation Service, in 2014, the export of such weapons reached an "incredibly high level" and exceeded $ 1,3 billion. In particular, the Iraqi Air Force received nine Su-25 attack aircraft from the Russian Defense Ministry, which were immediately Launched to fight the Islamic State militants. Prior to that, they had contracted a batch of new Mi-35 and Mi-28НЭ type helicopters for counter-terrorism operations, which are still being supplied to Iraqi troops. The United States, in turn, through its allies in the region, supplies the Syrian opposition with their BGM-71 TOW anti-tank missile systems, which, however, are not used to fight the Islamic State, but with the army of President Al-Assad.

In some cases, Russia is ready to meet, passing military products from the presence of the Ministry of Defense of the Russian Federation to the interested party.

Experts note that, using the slogans of combating terrorism and protecting borders, Russia manages to re-establish MTC ties with countries whose arms market seemed lost for various reasons. These include, in particular, Pakistan, the supply of military products which were conducted during Soviet times. Because of the promise of President Boris Yeltsin, made in January 1993 of the year during the first official visit to the main geopolitical opponent of Pakistan - India, the PTS with Islamabad turned out to be de facto frozen, and the bet was made entirely on Delhi.

The situation changed only in June 2014, when Sergey Chemezov publicly announced Pakistan’s interest in Russian helicopter technology, in particular the Mi-35 helicopters. Initially, Pakistani security officials expected to purchase about 20 machines, but subsequently their number decreased to four: Moscow wanted to evaluate Delhi’s reaction to the renewal of the MTC of the two countries. However, no public reaction to this followed: according to Vlast, the calm response of the Indian government is explained by the call of Vladimir Putin to Narendra Modi, during which he assured that the equipment acquired by Pakistan is not directed against third countries, but against radical Islamists and Companions of the Taliban. The security of Central Asia and the Central Asian republics will depend on the effectiveness of their confrontation. "Can this cause discontent in someone?" - Anatoly Isaykin wondered.

We are in Yandex Zen
Export sight
Projection of force
9 comments
Information
Dear reader, to leave comments on the publication, you must to register.