The project of jetpack A.F. Andreeva

October 27 2015
9
Jetpacks are a favorite topic of science fiction writers and search engine enthusiasts. For nearly a century, engineers around the world are trying to create an individual jet aircraft with a jet engine, but so far they cannot boast of any special success in this matter. Even reaching the stage of testing, such a technique does not find practical application and even in the best cases is used only for entertainment purposes.


The real boom in the field of jetpacks began shortly after the end of the Second World War. However, the first project of such technology appeared a few decades earlier. The earliest known jetpack project appeared in 1919 year. Its author was a Soviet engineer A.F. Andreev. Like many bold and extraordinary developments of that time, the Andreev apparatus did not even reach the stage of assembling a prototype. Moreover, over time, this proposal was forgotten for several decades, and the direction itself has not attracted the attention of engineers for a long time.

Back in 1919 (according to other data, in 1921), engineer A.F. Andreev filed an application for a patent in which an individual small-sized aircraft with jet engines was proposed. This product was intended to transport a person or a small cargo by air over a distance of 20 km. According to the calculations of the author, it was this range that was supposed to provide the available fuel and oxidizer supply. Such a device, as conceived by Andreev, could be used to transport people or to deliver various ammunition to enemy positions.

The main element of the Andreev jet apparatus, on the basis of which it was proposed to assemble the entire product, was a central rigid box with sliding trusses. Such power elements should be made of durable metal capable of supporting the weight of the payload and the thrust of rocket engines. In the central box provided a place for a person or cargo. In the case of the “passenger”, the box should be equipped with a harness system that holds the entire structure at the level of his chest. When used in the army, the device could deliver high-explosive or chemical projectiles of permissible weight to targets. 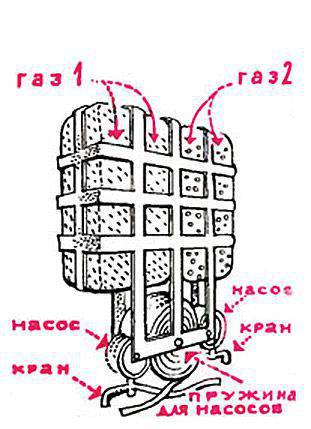 The general scheme of the "knapsack" of the fuel system. Figure Epizodsspace.no-ip.org

Behind the pilot it was proposed to mount a large fuel tank unit, which was supposed to resemble a satchel. Inside the common casing it was proposed to place two separate fuel and oxidizer cylinders in liquefied form. The fuel was supposed to be one of the hydrocarbons, the oxidizing agent - liquid oxygen. The cylinders had to have double walls with a vacuum between them, with the help of which it was planned to maintain the optimum temperature of the liquids. In addition, the system of partitions should be placed inside the cylinders, which would prevent a sudden flow of fluid during shocks.

Outlet tubes with cranes going to the pumps were provided in the bottom of the cylinders. Under the “knapsack” with cylinders there should have been a pumping unit responsible for the supply of fuel and oxidizer to the engines. As conceived by Andreev, this device was to be equipped with two pumps driven by a common spring. As a result, the pumping unit externally had to look like three mated cylinders. In the large average there was a spring, in small lateral ones there were pumps.

From each pump, two pipes were diverted to both engines. Thus, one pump had to supply both engines with fuel, the other with an oxidizer. The tubes connecting the pumps and engines were proposed to be made telescopic, which was connected with the design features of the side trusses. To reduce the size of the entire jet apparatus, Andreev proposed to make the trusses foldable. In the transport position, the trusses had to move to the central box, reducing the transverse dimensions of the device. Before work, they should be laid out. For this reason, the design of the fuel system should have had telescopic tubes that ensure the supply of fuel components.

Two jet engines should be installed on the sides of the trusses. Their inner part was planned to be made of heat-resistant materials, and the outer shell - of steel. In engines, the fuel had to mix with the oxidizer and ignite, leading to the formation of jet thrust. For the initial ignition of the mixture it was proposed to use ignition devices of the “type of gasoline lighters”.

Of great interest is the control system proposed by A.F. Andreev. According to his idea, two engines were to be mounted on hinged farms and equipped with special control levers. With the help of these levers, the pilot had to change the position of the engines and the direction of their thrust vector. Due to the synchronous or asymmetric tilt of the engines, the jet apparatus had to change the trajectory of movement.

According to the calculations of the inventor, the device in the working position should weigh about 42 kg. The tanks should have been 8 kg of fuel and oxidizer. With the take-off weight of the device (taking into account the pilot or other payload) at the level of 100 kg, it was planned to ensure the flight speed at the level of 200 km / h and the range to 20 km at one refueling station.

Before takeoff, the pilot of the Andreeva jet apparatus was supposed to put on a central box with a belt system and perform other operations in preparation for the flight. Then it was necessary to turn the control levers at a certain angle, after which the engines were started. After that, with the help of levers, the trusses were set apart to the sides, after which the reactive gases should not have been a danger to the pilot.

At the beginning of the year 1921 A.F. Andreev filed an application to the Committee for Inventions of the Supreme Economic Council. According to some reports, the project was ready at the end of 1919, but for some reason the application was submitted only at the beginning of 21. The inventor proposed not only to draw up his development and issue a patent, but also to allocate the necessary resources for the assembly of an experienced jet apparatus, which could later be tested and evaluated in practice.

However, potential customers of jetpacks were not interested in this offer. Experts who were instructed to evaluate the proposal, reacted with restraint and without excessive enthusiasm. As a result, the inventor received a patent, but was left without an order for assembling an experimental jet apparatus. Apparently, the proposed project was considered too complicated and unpromising in the existing conditions. 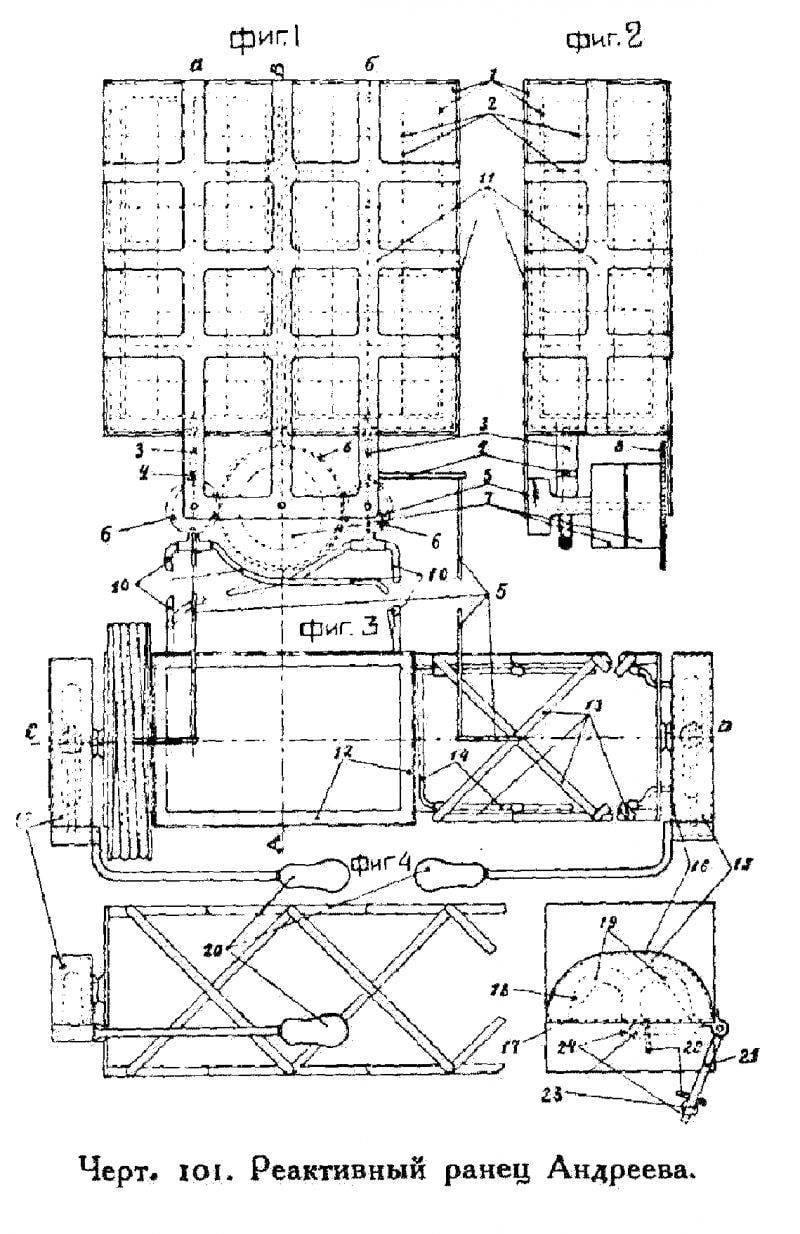 Drawing from the patent. FIG. 1 and 2 - “knapsack” with tanks and fuel pumps, FIG. 3 and 4 - central box, trusses and engines. Figure from the book by N.A. Rynina

The Invention Committee issued a patent to the inventor. The document for a period of 15 years entered into force only in September of the year 1924. As far as is known, in the future Andreev did not continue the development of this project and the patent actually became a point in an interesting development.

Separately, it is worth noting how the project A.F. Andreeva stayed in stories. For several reasons, the first known jetpack project could be lost forever in the archives. However, in 1929, he was mentioned in the book by Professor N.A. Rynin "Missiles and engines of direct reaction" (cycle "Interplanetary communications"). In this work, the text of the patent with a description of the design of the device. For a long time, the book of Rynin, also published in a not too large circulation, was the only source of information on the Andreev project.

Only in recent years, with the efforts of historians and museum workers, new information is beginning to appear both about Andreyev himself and about his works. Nevertheless, the history has retained very little information, and almost all of the available data on the inventor is related to the jet apparatus, the knapsack.

According to the latest data, the decision to abandon the assembly of the prototype was made in 1919 year, several years before the issuance of the patent. It must be admitted that the experts who carried out the project expertise were right. As subsequent events have shown, creating a compact liquid rocket engine is a very difficult task. In addition, the work seriously complicates a number of other nuances that should be taken into account when developing jetpacks.

The main problem of the project A.F. Andreeva was a used engine. Liquid rocket engines of the time did not differ high performance and reliability. In addition, the project required the use of a small-sized power plant. Equally problematic was the fuel system. Two tanks should have been liquefied gases. You should also use sealed fuel lines telescopic design. It is unlikely that such a technique could be built using the technology of a century ago.

Even if the assembly was successfully completed, the Andreeva jet apparatus could hardly show high performance. The main problem in this case became controllability. The control systems of the apparatus consisted of two levers that the pilot had to control. It is easy to imagine how difficult it would be to control the apparatus with moving jet engines of the required thrust. The slightest wrong movement could introduce the device into an unpredictable maneuver. Also, the launch of two engines with a small interval could lead to similar consequences.

Jet apparatus designs A.F. Andreeva was too complicated for his time. Its construction was almost inconsistent with the capabilities of the industry of the early twenties, and operation was associated with a number of serious difficulties that made it impossible. As a result, the experts analyzed the project and did not recommend to implement it. The inventor received a patent and threw a promising direction.

The level of technology development for a long time did not allow the inventors to come to grips with the creation of workable and serviceable jetpacks. The “second birth” of such a technique happened only at the end of the forties abroad. Later, foreign developments have achieved some success. Nevertheless, the primacy in the development and obtaining of a patent for a jetpack belongs to the domestic designer.