Daydreams of the "leader"

October 21 2015
49
I remember, not so long ago, Mr. Khodorkovsky was asked whether he was ready to become the next president of Russia? Journalists from the French edition of Le Monde asked, and MBH (Mikhail Khodorkovsky) answering this question, said that now, they say, this task is not necessary for him, but if necessary, he is ready ... work to overcome the crisis and constitutional reform ".


At the same time, the former head of YUKOS, speaking of the “presidential” task, did not specify whether the tasks of such a nature were set by the MBH himself or personally or several people put it in front of me ... Not being able to quote Mikhail Borisovich on the subject of “himself” he or "not himself", it is worth pondering on the topic: "Why? What if? ”Suddenly, MBH will stand for the upcoming (in 2018) presidential elections, and suddenly there will be those 50 percent plus 1 voters who have come to the polling stations that can vote for Mr. Khodorkovsky. Well, so ... As they say, in the order of delirium, but still ... Especially since the MBH itself is clearly dreaming of it. 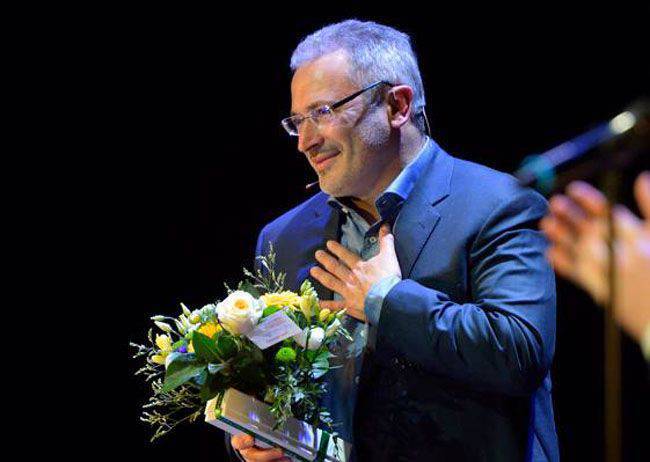 Here, it would seem, one would be indignant at the very fact of such reflections - they say, what kind of “potentially possible presidency” Khodorkovsky is talking about, because the MBH was shaking a term. You can be indignant (I resent myself), but the situation in this case is very original here.

Indeed, quite rightly, the question may arise: is it possible that Mr., who was serving a sentence in prisons for committing a crime, could run for president? The most amazing thing is that the Russian laws in this regard are not just democratic, but democratic, somehow too much. The Constitution of the Russian Federation, which is going to “reform” the MBH, in the article on the President of the Russian Federation does not report absolutely anything about any restrictions on candidate activities for those who have served time.

Not so long ago, Maya Grishina, a member of the Central Election Commission of the Russian Federation, put all the dots on "E" in the matter of requirements for presidential candidates, saying that a person with a canceled conviction (if recognized by the court as capable) has the right to be elected and elected for in the Constitution there are no prohibitions in this case. Wonderful, you will not say anything ...

That is, according to the current Russian legislation, even a criminal can become a president (de jure), if only a previous conviction, including a conviction for serious crimes, has been extinguished ... Just go and try a person with a previous conviction to get a job in school or in the internal affairs . Everything is clear - the road is closed. And the presidential position, it turns out, is so-so-ugh ... -spit and grind-run for at least a killer, even a corrupt official, even a pedophile - just to have a redemption certificate present.

This, excuse me, not even liberal legislation, is something beyond liberalism, allowing well-known “friends” of Russia to invest in the same office to at least try to push this individual higher to realize their goals and interests.

However, there are elements that can cut off such lovers to express foreign interests, such as MBH, from the presidential race. The point is that the presidential candidate of Russia must reside permanently on the territory of Russia for 10 years, also not have, in addition to the Russian, any other citizenship, as well as a residence permit in a foreign country.

As is known, the former head of YUKOS at this stage of his rich life journey settled far beyond the borders of the Russian Federation. According to the latest data, Khodorkovsky lives in a house on the lake in Switzerland, and is in no hurry to appear in Russia. And no one can say with complete confidence today that MBH has exactly one passport, and this Russian passport, like no one can say for sure, whether Mr. Khodorkovsky has received a residence permit in the vastness of a democratic Europe ...

In general, all this incompleteness about the status of an ex-convict in the Yukos case can only say that if Khodorkovsky is going to “occupy” the Kremlin, he certainly is not going to participate in the elections for this. His numerous interviews - after he had “ironically” declared his unwillingness to engage in political activities, had also “broken” his promise by violating - they testify that the MBH is counting on some kind of Maidan incarnation in the Russian Federation. In general, it so happened that if a certain individual who calls himself a “politician” has something in the rating asset at the level of statistical error (for example, Mr. Navalny), then there is no talk about real participation in real elections. Everything is usually limited to open or half-closed calls for a certain group of Russians to "act." The action itself of these gentlemen is always associated with the exit "noisy crowd" in the city center under the slogans of "We are for peace!", While seeking any opportunity to carry out a provocation in order to bring the rally to the main course - with beatings, smoke bombs, cobblestones and so forth. So far, thank God, it has managed, but this, as they say, is not a reason to relax.

So, what can the Russians expect if MBH or one such as the “leader of the democrats” MBH suddenly finds itself at the helm? You can, of course, drive away these evil thoughts, but, as they say, you need to know the “friends” by sight and understand what they are capable of in order to satisfy the “friendly” interests.

The first thing that the "Swiss Reformer" suggests is constitutional reform. Moreover, this is not a reform, as a result of which the points imposed by the puppeteers from the USA at the beginning of 90's (for example, the complete independence of the Central Bank) to “correct” the independence of the Russian Federation will disappear from the basic law. The reform proposed by MBH from the shores of the Swiss reservoir is aimed at significantly expanding regional powers by weakening the central government. It would seem that what is reprehensible? On the contrary, there are more powers at the regions, more independence, higher internal competitiveness ... However, in the end, all this is proposed not to increase the competitiveness of the regions as such, but in order stories countries (both with the Constitution and with its complete absence), sow internal contradictions, revive destructive slogans like “Stop feeding the Caucasus!”, try to bring the matter to fragmentation, when mutual claims are not without the help of “friends of Russia” Russian from Kursk or Voronezh will speak Russian from Pskov or Arkhangelsk. Russia in periods of complete weakening of the central government, the days of bloody fragmentation have already passed. And if you do not learn the hard way, then you should at least look around - there are enough examples in the current world.

The second from MBH: a complete rejection of Russia of the nuclear status. Remove all nuclear weapon to landfill and methodically dispose of - Khodorkovsky's dream. Well, unless it is not a gift to “friends” of Russia, for whom the nuclear shield of the Russian Federation is that bone in the throat, which does not allow them to revel in “exclusiveness”. At one time, "friends", rubbing their hands and swallowing saliva from pleasure, already "helped" us to get rid of the nuclear status - watching how we ourselves sent wagons with enriched uranium to our "partners", how the strategic bombers sawed, in addition translating production defense workshops for the production of colander and terke.

The third is from Khodorkovsky: the future of Russia is in NATO and the European Union. This is to ensure that Russia becomes a testing ground for hundreds of thousands or millions of refugees from Africa and the Middle East according to the quotas that Brussels will carefully allocate to us? This is so that, on instructions from Washington, the Russian servicemen are sent for execution in the NATO sense of "international duty" to serve the interests of the same "exclusive nation"? ..

Well, and finally, about Khodorkovsky’s “program” (the June publication of Voices of America, posted on Online "Oppositionist"):

The West must think about the future of Russia.

No, thank you ... We will think about our future ourselves ... Let the West think over its own future, and there, Michal Borisych, is something to think about, isn't it ...

Ctrl Enter
Noticed a mistake Highlight text and press. Ctrl + Enter
We are
MBH. Exposure SessionsKhodorkovsky speaks Poroshenko in the same language?
49 comments
Information
Dear reader, to leave comments on the publication, you must to register.