The project of the robotic complex "Nerekhta"

October 23 2015
5
Domestic defense enterprises continue to develop the direction of combat robotic complexes. The latest results of work in this area were shown at the recent exhibition “Innovation Day of the Ministry of Defense” held in Kubinka. During this event, the Plant them. Degtyarev (Kovrov) and the Advanced Research Foundation presented a revised version of the multifunctional modular robotic complex Nerekhta.


It should be noted, the existence of this project became known in 2013 year. It was reported that Kovrov specialists are developing a promising multi-functional combat robot. In addition, in the early summer of 2013, the project received the first feedback from the country's leadership. So, Deputy Prime Minister Dmitry Rogozin, having familiarized himself with the project, criticized the proposed machine-gun armament of the complex. In his opinion, a relatively large tracked platform should not carry the “small” weapon. In this regard, the official recommended to arm the complex with anti-tank missiles.

In March 2015, the details of the project appeared. In addition, by this time the appearance of the product "Nerekhta" became known. In its current form, this complex is a tracked platform, remote control systems and a variety of special modules that are proposed to be mounted on the chassis for solving various tasks. Such an architecture, it is claimed, provides the greatest possible flexibility of application and a high degree of unification of various types of equipment. 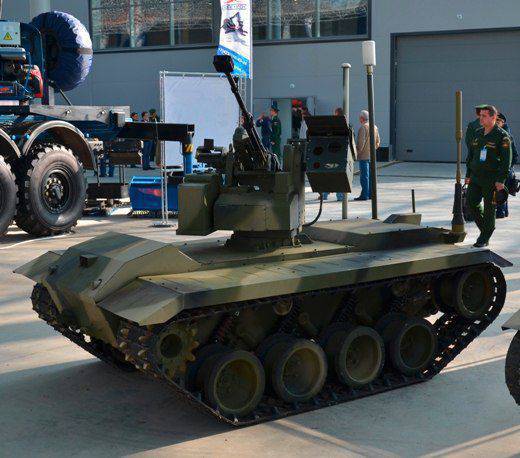 In the spring it was reported that over the next few months, the authors of the project intend to complete the preliminary tests and fine-tuning of the platform and its weapons. In addition, the development of a full-fledged armored corps was underway, which was supposed to protect the units of the vehicle from bullets and shrapnel. Until the end of the year, the military was supposed to present a full-fledged complex with self-propelled equipment for various purposes.

Apparently, plans to build several robots for various purposes have already been fulfilled. At the recent exhibition “Innovation Day of the Ministry of Defense”, two self-propelled vehicles with a different set of special equipment were shown. One of the tracked platforms received a combat module with a machine gun rifle caliber, the second - a block of optical electronic equipment, the so-called. artillery intelligence module. Thus, the first Nerekhta machine can attack various targets, while the second task is to monitor the situation and search for targets for it. At the beginning of September, the video recording of the Nerekhta’s test, where two robots worked according to this scheme, was released to free access.

According to the manufacturer, the complex "Nerekhta" consists of several main modules. The main element of the complex is a universal robotic platform on a tracked chassis. In addition, the complex provides means for transporting the platform. The control panel can be installed on self-propelled automobile chassis or manufactured as a remote module. At present, the Scorpion armored car is offered as a self-propelled platform for transporting the console.

The universal platform of the complex "Nerekhta" is a compact light tracked chassis, equipped with armored hulls and fixtures for the installation of special equipment. The platform has a length of 2,5 m and a width of 1,6 m. The height of the roof of the hull, excluding special equipment, is 0,9 m. The curb weight of the machine is about 5 t.

The platform is equipped with a tracked undercarriage with four support rollers on board and a rear drive wheel. The machine is equipped with a hybrid power plant. Electric motors are used to drive the driving wheels, which provide acceptable mobility with minimal noise. To recharge the batteries, it is proposed to use the built-in diesel generator. The used powerplant allows it to reach speeds of up to 32 km / h. Top speed in downshift reaches 16 km / h. 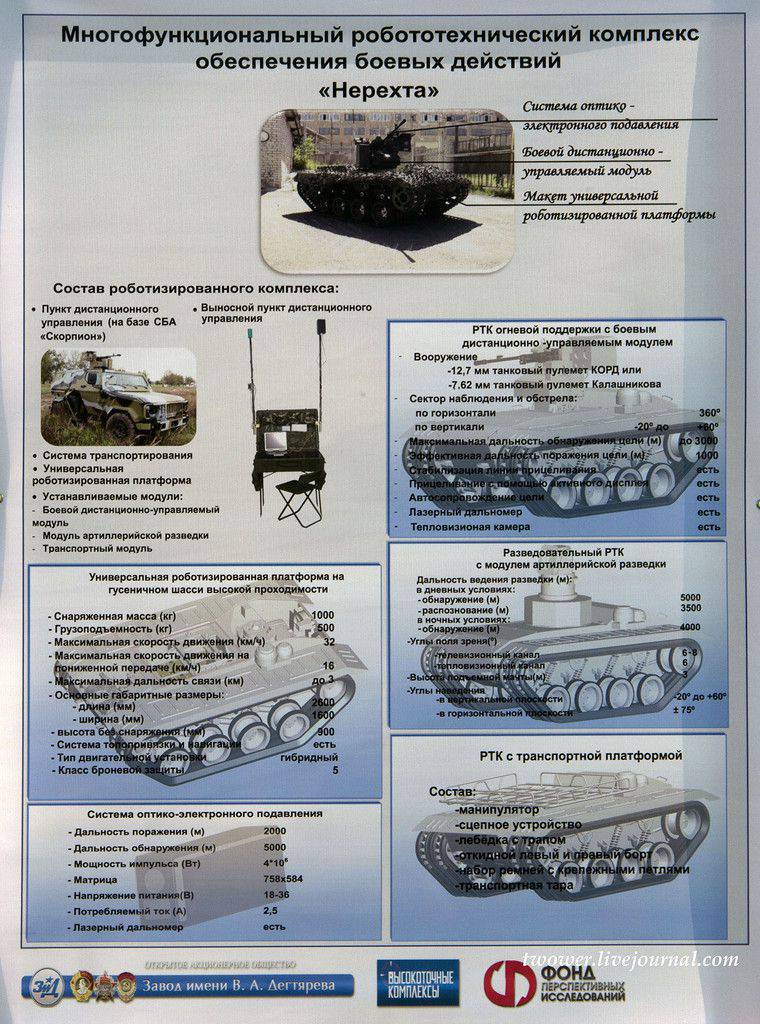 Self-propelled chassis has all the necessary systems for two-way communication with the control panel. There is an equipment for topographic location and tracking of some parameters of the mechanisms with the transfer of data to the console. Also receiving commands from the console, including commands for the installed special equipment. Communication systems allow the complex to move away from the console to a distance of 3 km (according to other data, to 20 km).

On the roof of the universal platform there are fasteners for installation of special equipment. It was previously stated that a special module of any type is installed using four nuts, which greatly simplifies the maintenance and operation of equipment.

A variant of the Nerekhta complex with a remotely controlled combat module should be directly involved in the battles. In this case, a special module for the weapon is built on the roof of the chassis; This product can be equipped with a PKTM machine gun of 7,62 caliber mm or a large-caliber machine gun "Kord". To the right of the machine gun, a cartridge box with a curved ribbon guide is provided on the combat module, and on the left side of the module there is an optoelectronic equipment unit for aiming and controlling the fire. To enhance the combat performance, the unit includes a thermal imaging camera and a laser range finder. The sight line stabilizes.

The design of the proposed combat module provides circular hovering in a horizontal plane at elevation angles from -20 ° to + 60 °. The optics used allows finding targets at distances up to 3 km. The effective range of fire depends on the model of the machine gun and the type of target. The combat version of the complex "Nerekhta" can be used to detect and destroy manpower and unprotected enemy equipment.

The reconnaissance robot of the Nerekhta complex is equipped with an artillery reconnaissance module. This device is made in the form of a rotary base and a lifting mast with a "tower" in which the necessary equipment is installed. This version of the complex is equipped with a camera and a thermal imager installed in a rotating casing. The available drives allow you to rotate the equipment at an angle up to 75 ° from the axis of the machine. Vertical guidance angles range from -20 ° to + 60 °. If necessary, the optical apparatus can be raised to a height of up to 3 m using a telescopic mast.

The camera of the intelligence module has a field of view from 6 ° to 8 °, and a thermal imager has a 6 °. The target detection range during daylight hours is declared at the 5 km level. Target identification is performed at distances of about 3,5 km. For a thermal imager, the detection range reaches 4 km. The video signal of the camera and the thermal imager are transmitted to the control panel, so that the operator of the complex can perform visual detection of targets in his area of ​​responsibility. Data on the found targets can be transferred to other operators of similar equipment, gunners, infantry, etc.

A transport variant of the robotic complex has been developed. In this embodiment, the platform "Nerekhta" can carry a variety of cargo weighing up to 700 kg. With the help of such equipment, for example, it is possible to organize the delivery of ammunition to the advanced and evacuation of the wounded. The transport version of the robot is equipped with a cargo platform with folding sides. In addition, a manipulator, hitch, winch, etc. can be used. 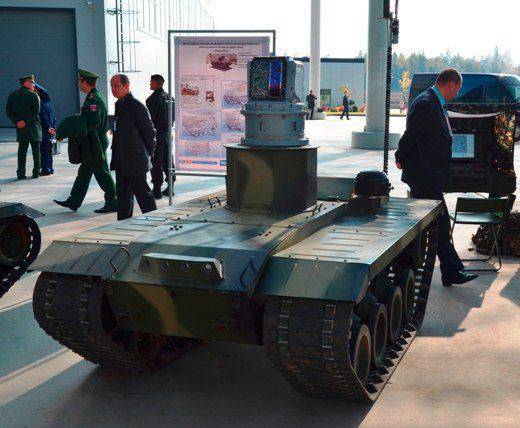 As part of the project "Nerekhta" a special system of optical-electronic suppression was created, which robots must use to counteract the enemy's optical systems. It is argued that this system is capable of detecting optics at distances up to 5 km and effectively suppress it at distances up to 2 km. For accurate determination of the distance to the target, necessary for effective suppression, there is a laser range finder. Optics of the enemy are "blinded" and disabled by pulses of light with a power of 4 MW.

In mid-October, a few days after the completion of the Innovation Day of the Ministry of Defense, some information appeared on the future of the Nerekhta project. October 15 TASS news agency referring to an unnamed source in the defense industry reported that the promising robotic complex is ready for testing. According to the source, the sample of the complex presented at the exhibition is almost ready to participate in the trials. The beginning of full checks is planned for the next year.

The source of the TASS agency noted that the specialists have to solve a difficult question. The prospective robotic complex should be entered into the existing structures and find its place among the equipment and weapons of various units. This process is not simple and fast.

According to the latest data, the project of the multifunctional robotic complex “Nerekhta” has passed a number of important stages and is ready for testing. The start of inspections is scheduled for next year. Thus, new project reports should appear in the next few months. In addition, the decision to adopt the complex will be made, most likely, no earlier than 2016. The complex "Nerekhta" is of particular interest to the armed forces, but first it must confirm the declared characteristics.