American genie from a bottle

October 21 2015
29
What goals does Washington pursue by making statements about the “wrong” strategy of Russia in Syria and that the Russians are not bombing terrorists at all, but “moderate opposition”, and are defending the “Assad regime”? Why, since Moscow began a campaign against Islamist militants in Syria, has the White House been more nervous than usual? Finally, is there a connection between the prosperous existence and the strengthening of the “IS” over the past year and those reports of the American intelligence community that were either ignored or edited by the Pentagon? 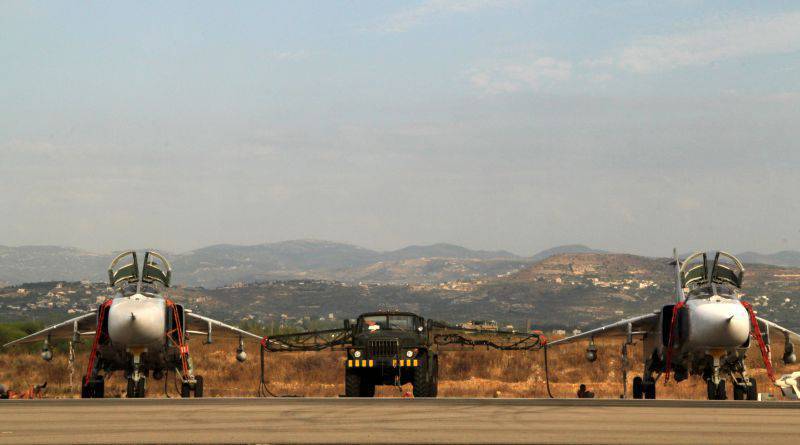 Recall that last month information about the systematic deception of Barack Obama by Pentagon officials leaked to the American press. Fifty-two scouts said that their reports on the "Islamic state" fall on the table to the US president in smoothed form.

The fact that the ranks of the Pentagon is subjected to the editing of the message of intelligence on the "IG", reported in an exclusive material "The Daily Beast". The American edition declared about the “uprising of intelligence pros”: in front of outraged special services, their “honest assessment” of the war “IG” turned into a farce.

It turned out that as early as July 2015, two senior analysts of the Central Command decided to send a written complaint to the Inspector General of the Ministry of Defense. According to them, the documents that the representatives of the Pentagon gave B. H. Obama, portrayed terrorist groups weaker than their analysts described. The Central Command of the US Armed Forces (CENTCOM) believed that the “general line” should be followed, culminating in the upcoming US victory over IG, Al-Nusra Front and other Al-Qaida branches in Syria. Two analysts were supported by 50 people. Others have previously complained about the "politicization" of intelligence reports.

The leak to the big press about the “combed” reports for the president caused a lot of confusion.

Indignant (or indicatively indignant) is not only Mr. Carter. Distortion of data regarding the activities of terrorists are also affected in the Old World.

Ironically, she writes that American spies are complaining - they say their reports on the Syrian campaign are "rewritten." The purpose of editing is to prove that the campaign against terrorists in Syria, led by the United States, is "working."

In reality, the actions of the American coalition in Syria are far less successful than it appears in the distorted reports.

Among the dignitaries, the scouts even blame the director of national intelligence, James Clapper. It is he who is responsible for manipulating the conclusions prepared for President Barack Obama and other politicians of the highest echelon of power.

Own sources of the Daily Telegraph, related to the US military community, confirmed the situation with the reports, but noted that the problem had been noted before. They suggested that the same methods were used to correct documents filed in recent months, even before ISIS took control of a part of Iraq. “We began to warn then that the Iraqi army was too weak, and the IS was getting stronger ...” said the former defense ministry analyst, who had recently resigned, told the publication.

US politicians often say that the sudden strengthening of the "IG" caught them "off guard." Such statements are a former military analyst called "lies."

Obviously, we note that the warnings and reports of the intelligence community were not only “edited”, but also ignored. The latter, like the first, should be attributed to the conscious activity of the authorities.

"Vrazploh" caught the White House, not only strengthening the "IG", but the appearance of Russian in Syria.

The largest American newspaper Washington Post writes: The United States was taken by surprise by the actions of Russia.

The first signs that Moscow was going to conduct a military operation in Syria were the Kremlin’s requests for permission for a rather large number of its heavy aircraft to cross the borders of other states. They talked about this since the middle of August, 2015, and they did not speak somewhere, but in the Obama administration. Suspicions intensified when Russia transferred jet fighters and teams of military advisers to Syria.

And yet the United States missed the Russian military operation: the White House, according to Washington Post journalists, apparently “was taken by surprise by a series of air strikes” in Moscow.

Russian airstrikes "undermined" the already weak American strategy. And on October 9, the Pentagon officially acknowledged that it is winding down its mission to create forces to combat IS.

The failure of the United States to combat terrorists and the White House’s clear desire to curtail the Pentagon operation led to dissatisfaction with the US Congress.

US lawmakers began investigating the possible causes of intelligence failures in the Middle East. Senators are concerned that the US intelligence services have been thinking too long, trying to realize the thoughts and intentions of the Russian leaders who are carrying out the “military offensive.”

It got to the point that Barack Obama had to speak on this topic. The President of the United States disowned from "think long" and from "by surprise."

Washington "expects Russia and Iran to have an impact on Assad," Barack Obama said in an interview with the 60 Minutes program on CBS.

According to him, the Russian strategy in Syria is wrong. "While Assad is in power, it will be difficult to switch the forces of the moderate Syrian opposition to fight the" IG ", - quotes the US President "Lenta.ru".

"We knew that Russia plans to provide military assistance to Syria, because it was afraid that the Assad regime would collapse," the head of the White House said.

The last line in the Western press is actively "extended."

The head of the European Council, Donald Tusk, speaking in the European Parliament, said about the threat of a new wave of migration to the EU. What caused the "threat"? It turns out that the actions of Russia and Iran in Syria!

“During my visits to the region, no matter who I talked to - with presidents or refugees in camps in Turkey, Jordan or Egypt - I was warned about one thing: a potential victory for the Assad regime, which is more likely today because of participation Iran and Russia in Syria, will lead to the next migration wave, the newspaper quotes Tusk "Sight". - Yesterday this message was confirmed by the president of (Turkey) Erdogan. Turkey estimates that another 3 million potential refugees could come from Aleppo and its surroundings. ”

So far, however, the militants are running.

Recently it was reported that over three thousand militants from the Islamic State, Jebhat al-Nusra and Jaish al-Yarmouk fled from Syria to Jordan. These militants fear Assad’s offensive and Russian attacks aviation. I wrote about it "Lenta.ru" with reference to the RIA "News».

Earlier, it was also reported that after the Russian aviation bombed IG’s positions in Rakka, militants began to evacuate their families to the city of Mosul (located in Iraq and still controlled by IG).

And what is the answer we hear from the EU?

Exclusive Reporting Political Editor «The Sun» Tom Dunn begins with the approval of the Minister of Defense of the United Kingdom Michael Fallon: they say, Vladimir Putin does not fight with terrorists at all, but kills Syrian citizens in order to support his ally President Assad.

Fallon says the Russians use "unguided ammunition", which is dumped "in areas where civilians live." Russian "kill civilians." The actions of the Kremlin are directed "against the free Syrian forces fighting with Assad."

He also acknowledged that these "astounding" actions of the Kremlin canceled the plans of the West to create a no-fly zone. The West wanted to make such a zone in order to “protect the refugees”.

Of course, the Minister of Defense was not alone.

Russia's intervention in Syria helps support the "butcher" Assad, Prime Minister David Cameron told reporters. According to the Prime Minister, who is quoted "BBC", the Russian military does not distinguish between Islamist militants and those who fight with the current Syrian president.

Definitely a negative reaction from the West shows: European vassals fulfill the will of the customer - Washington, and that, in turn, is in no hurry to fight Islamist militants in the Middle East.

Togo and look, Moscow for a couple with Assad will be accused of assisting the militants "IG" and trying to build a "caliphate" in Syria.

In fact, the White House covers the Caliphates.

8 October Interfax handed the statement of the official representative of the Ministry of Defense of Russia, Major-General Igor Konashenkov. He said that Western countries are not yet ready for constructive cooperation with Russia in the fight against terrorism in Syria.

“Today we address: give the coordinates of the ISIS objects. But in response to silence or refusal, ”the general stated.

He noted that attempts to get contacts from moderate opposition were not crowned with the result. “Today we are fixing a complete stupor with our colleagues. From which the following conclusion suggests itself: either the moderate opposition is a ghost, or you just pretend to support it, ”a representative of the Ministry of Defense told the Americans.

It becomes clear: the fight against terrorism is not the real purpose of the US and the EU in Syria. At least, is not the goal number one.

At a time when the “Islamic State” was still called “ISIS” and did not represent such a powerful force, which later became, the White House was beneficial to its existence: after all, the militants fought against Assad, and Washington repeated as a refrain: “Assad should leave.” And today, little has changed: the West still wants to “leave” Assad, and for this all means are good, even “IG”. It is not excluded that the United States would have precisely targeted the IG immediately after the overthrow of Assad. But not before.

To some extent, the “Islamic state” turned out to be an oriental genie released from an American bottle: having arisen on the chaos of the “Arab spring”, supported by the State Department, it continued to live and grow stronger, approaching Assad. American formal opposition did not weaken him at all. It was probably conceived.

Therefore, we will not be surprised at the position of the Americans and the British, who believe that the Russian strategy in Syria is "wrong." The West and Russia are on opposite sides of the front.

Ctrl Enter
Noticed a mistake Highlight text and press. Ctrl + Enter
We are
Obama cheatedSyria: Americans scare themselves, and Asma Asad buys chairs
29 comments
Information
Dear reader, to leave comments on the publication, you must to register.