“Do not just land, but also shoot when you go by the sea!”

October 22 2015
26
That's how interesting it is история: during the Second World War, Soviet troops practically did not have to land amphibious landings, but our allies in the anti-Hitler coalition had to land them almost constantly. And it should be noted that the armed forces of the United States and Britain had in sufficient quantities a variety of amphibious. But each time they prepared for the next invasion, it turned out that most of these amphibious weapons did not have their own weapons. And it was required and even very much, because it simply did not succeed in suppressing all ship artillery support targets for the landing ship artillery! Therefore, willingly or not, but the army team had to improvise, often violating all the requirements and standards. And the problem of fire support of the landing from the sea was really very acute. After all, in order to destroy the unexpectedly revived machine-gun nest in a hundred meters of landing craft approaching the coast, it is not at all necessary to demand fire from cruisers or battleships, but they would simply not have fallen into it. That is why at the end of 1943, the US Army Artillery Research Center, located on the Aberdeen Peninsula, developed a whole program of tests that were to determine the degree of possibility of enhancing the firepower of standard landing craft - various barges and wheeled, and tracked amphibians such as DUKW and LVT.


The tests began as early as January 1944, and went until April. During this time, the site tested a variety of weapons of landing craft and gave them the appropriate recommendations. So, completely unsuitable for enhancing the firing capabilities of the landing force were: 106-mm mortar mounted on the DUKW vehicle chassis, 75-mm howitzer delivered on LVT2, 105-mm howitzer on LVT4, four-barreled anti-aircraft machine gun on LCT-6. Since Operation Overlord was expected ahead, the tests were conducted with high intensity, and practically everything that could somehow shoot along the shore from the sea was installed on the landing craft! 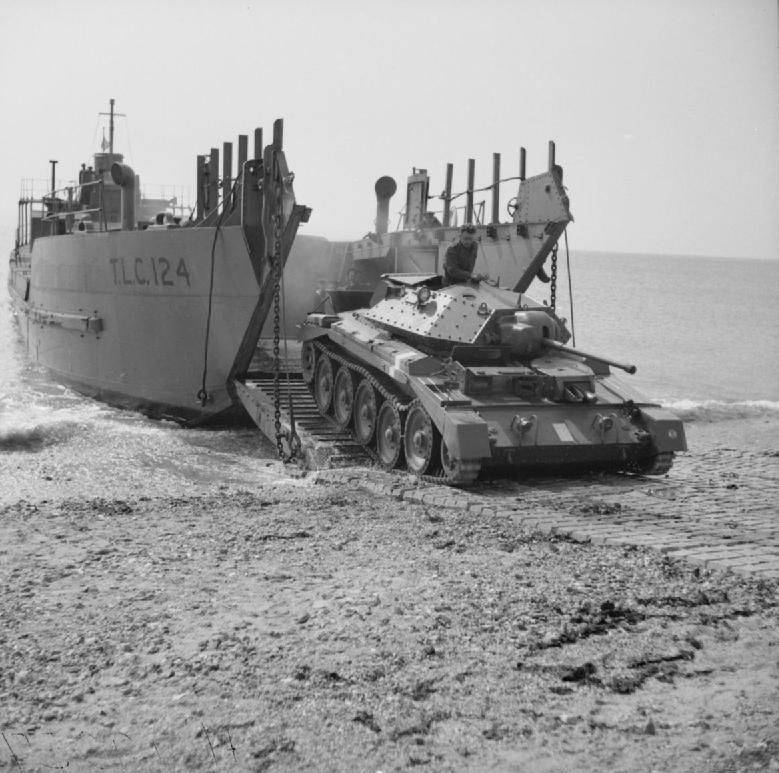 Tank "Kruseyder" landed on the shore. It is clear that this tank could not shoot from the hold of such a vessel.

At the same time, in the course of the experiments, it was determined not only the possibility of such shooting, but also the degree of its effectiveness, as well as the consumption of ammunition. After all, it was necessary to draw up all the specifications for making changes to the design of each landing craft and, accordingly, transport vehicles, to prepare the calculated data on the loading of ammunition and the fuel necessary for their delivery. That is, there was a lot of work, and it was carried out very thoroughly. 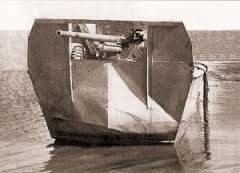 Some of the points that emerged during the test surprised even experienced test tankers and weapons specialists. For example, it turned out that from tank Sherman can only be fired from the LCM-6 landing barge only after installing special turret rotation limiters on its hull. Otherwise, damage to the landing ramp could not be avoided. The Sherman Kalliop, which had a T-34 rocket launcher on the roof of the turret, could not use its cannon for firing, but, as it turned out, it could quite effectively fire its rockets at area targets on the shore. 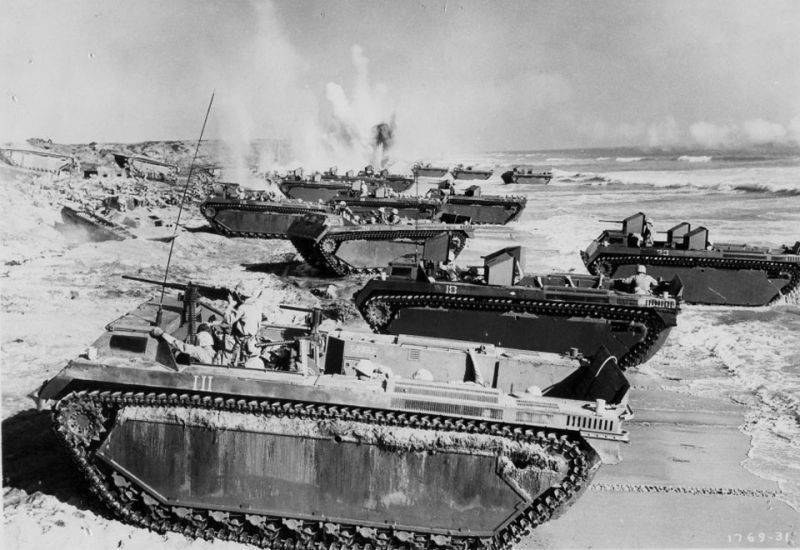 Amphibious armored personnel carriers on the shore under fire.

105-mm howitzers could also shoot directly from the decks of landing barges, since their barrels rose above the edge of the ramp, but in order to mount them, that is, fix them so that they could do it, 30 mines were required, and the time for the paratroopers was too expensive! It was possible to install anti-aircraft guns on cruciform carriages on landing barges, and it was possible to shoot one of them, but only opening their beds partially, not completely, and carefully fixing them with braces to the bottom. 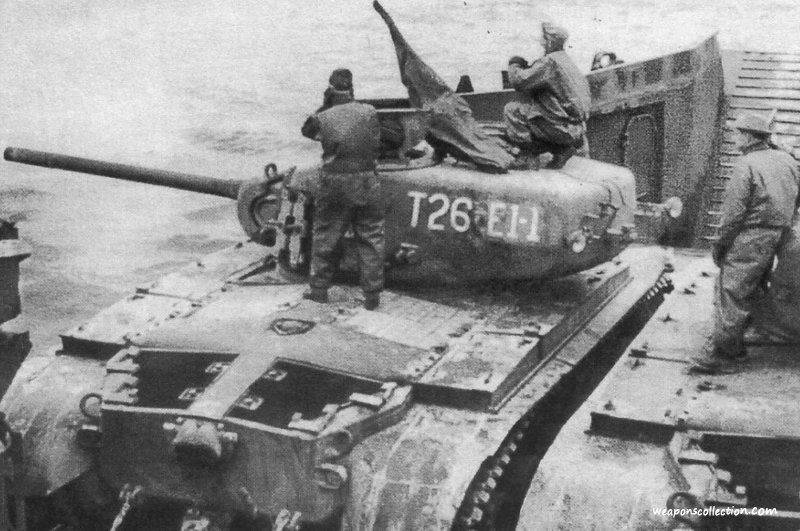 Shooting forward from behind the ramp is impossible, but to the side - you can!

The tests also revealed that 90-mm and 120-mm anti-aircraft guns can fire over the side of the barge and its ramp to any point on the horizon. But the “muzzle wave” on a towing vehicle often breaks out the windows, and it was impossible to transport them separately from the cars, since this deprived them of their mobility after disembarking on the coast. 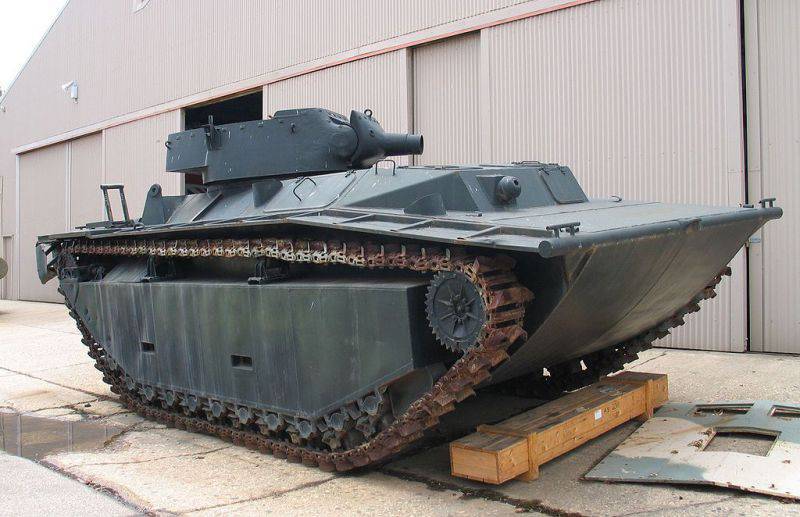 LVTA4-2 with 76-mm short cannon in the tower. Museum of the Australian Royal Armored Forces in Papapunyal.

The light tanks М5А1, which were supposed to be landed on barges like LCM-6, proved to be very good. Because of the high height of the ramp, they, however, could not shoot straight along the course, but they did shoot over the sides in both directions. On top of that, two 106-mm mortars were originally installed on barges of this type, the base plates of which were laid in wooden boxes filled with sand. Two 106-mm mortars, two 37-mm tank guns and four more 7,62-mm machine guns - for such a small boat it was a really solid firepower. Well, in order not to reduce the ammunition of tanks, because it could be very necessary on the coast, it was recommended to place additional ammunition outside and bring it inside the tank through the open turret hatch. At the same time saving ammunition was no longer required! 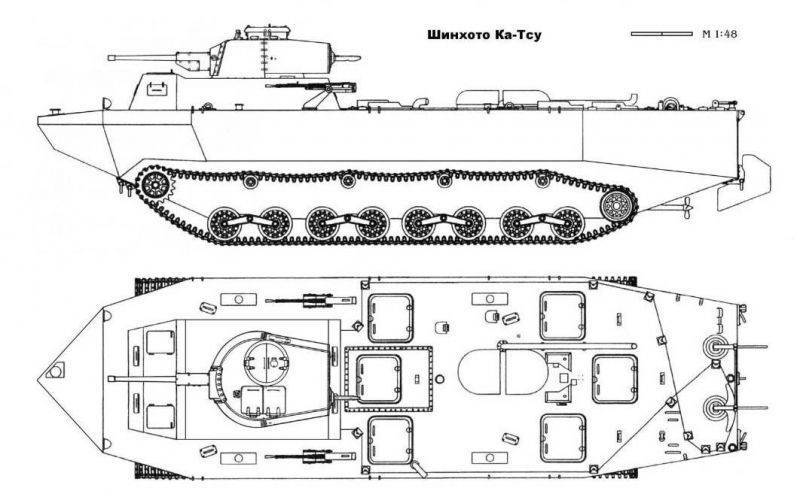 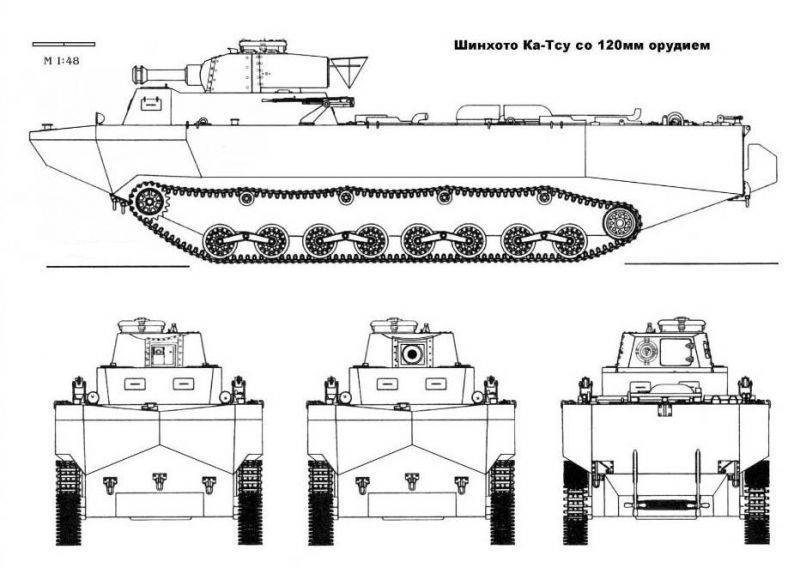 The same tank, armed with 120-mm short gun with a lightweight recoil.

The experience of the Americans was appreciated by the British. At first they received LVT2, armed with two machine guns: one 12,7-mm and one 7,62-mm. Then there were three of them already on each board, but in the end the English put a turret on the LVT2 with the 20-mm Polsten rapid-fire cannon. Then it turned out that such amphibians can transport even 17-pound (76,2-mm) Mk.1 cannon. This modification of the machine was given the designation LVT (A) 2. Its main difference was two folding ramps, with which the gun could be rolled to the ground after landing on the beach.

Australians are also actively preparing for amphibious operations on islands in the Pacific Ocean. Having received 30 LVT (A) and DUKW cars from the USA under the Lend-Lease, they also thought about how to enhance their fire capabilities. To do this, they put on their launchers for 4,5 inch-in caliber rockets (114 mm). The Americans themselves also applied them precisely from the LVT in November 1943 during the landing operation on the atoll Kwajalein. The rockets were then on 24 machines in the rear of the hull along the sides. It turned out that this was completely inconvenient, since during movement they were often flooded with waves, and the salty ocean water closed the electrical circuits. But even those shells, which they managed to launch then, produced a stunning psychological effect on the Japanese. 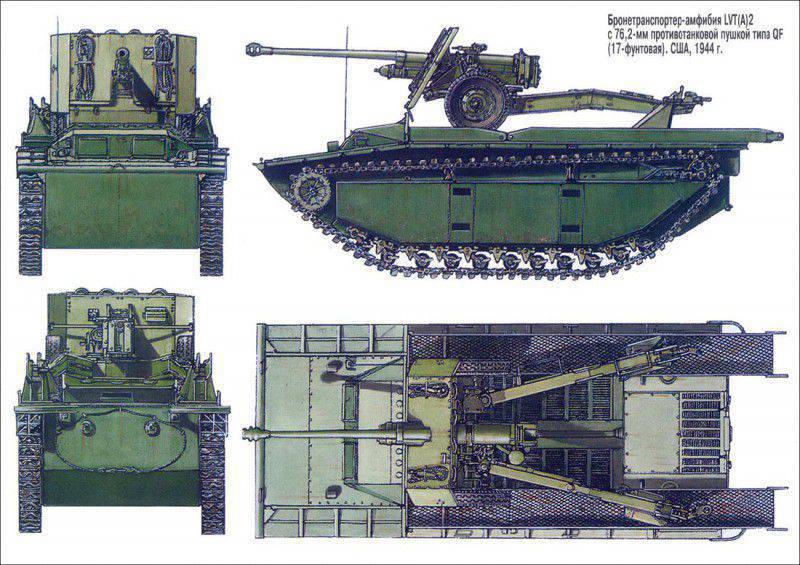 Well, the Australians, inviting to their assistants engineers from the United States, have developed a completely new installation, which had only one barrel and a drive above it. One rocket was placed in the barrel, and the other six were loaded into the drive. On each LVT (A) 4 machine, two launchers had to be mounted, so that without reloading, each of them could launch 12 shells one after another in seconds.

On tests, the missiles were fired automatically, at 0,3 intervals with. The rocket speed at the start reached 106 m / s, and the firing range was 990 m. The machine was tested without crew, firing three rounds completely in automatic mode. But the system showed itself so well that the shooting was carried out in full and with the crew on board. True, then it was necessary to give tankers helmets that had enhanced acoustic protection. But then, when they were wearing these helmets, no one complained about any inconvenience when shooting. 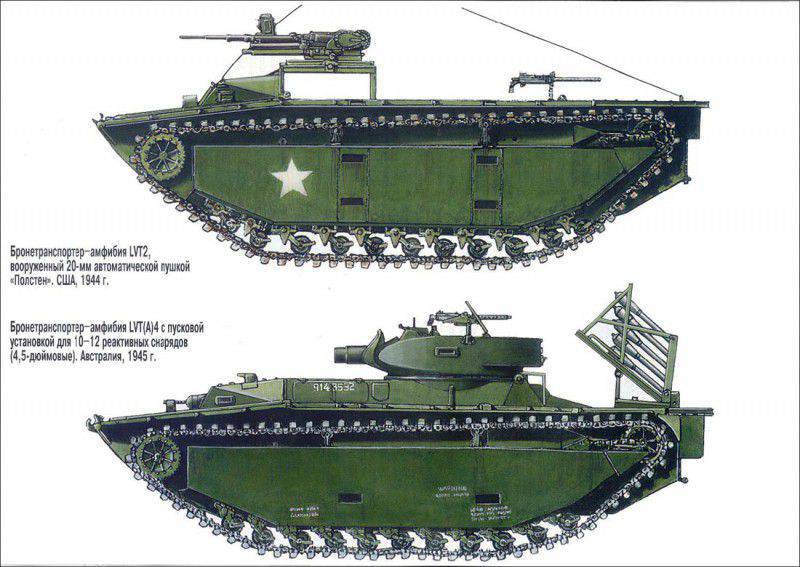 With automatic firing, all 12 missiles could be fired in 3,15 seconds. The shells flew around 1080 yards, but lay down in the target area with a wide scatter. Although it was noted that as a result of the bursting of such a large number of missiles, the target was less than impressive in less than 4 seconds, since each missile was equal in power to the 105-mm howitzer projectile. Soon the installation was adopted by the armed forces of Australia, but it was not armed anywhere else.

Thus, the possibility of enhancing the firepower of the assault force by firing also from the own landing craft by the equipment transported to them was proved. And in the best way tanks and multiply-charged rocket launchers showed themselves, which were mounted both on amphibious vehicles and ships, and on tank towers.

Ctrl Enter
Noticed a mistake Highlight text and press. Ctrl + Enter
We are
Movable machine gun nest / wedge "Object 217"Is the old well forgotten to become the new? Part-2. By call of honor and duty
26 comments
Information
Dear reader, to leave comments on the publication, you must to register.