"Peoples of the Sea". Armor and weapons (part ten)

October 26 2015
97
So, the invasion of the "peoples of the sea" was a massive migration of peoples, somewhat similar to the current exodus of Syrians and Africans to Europe. Only now German schoolchildren change their bedding for them there (they themselves are too unhappy for this!), And the volunteers clean up the trash left, and then the uncivilized Egyptians met them with spears and swords, and the copulative organs were cut off from the defeated, and they also portrayed it. ” event "on the walls of their temples. Do you know why? To avoid fraud! After all, if you cut off your hands, then how will you figure out where are yours, and where are strangers and who will check for the extra absence of a pair of hands from your own ... And here everything is obvious: the Egyptians were cut off, and the rest were not. So here everything is without forgery and overstating the "indicators"! 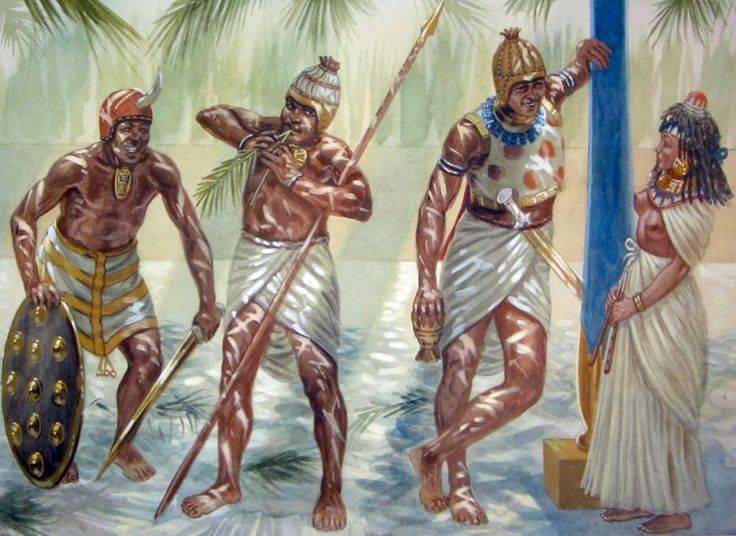 Warriors at all times loved to flirt with pretty women! Artist J. Rava.

Well, how did the warriors of the “nations of the sea” look like, we already partially considered in those materials where it was a question of the Trojan war itself. However, now we will discuss its consequences, especially since the spread of dates is quite large for 1250 - 1100. BC. However, it is great for us, and people of that time lived slowly, because mobile phones did not exist yet.

So, the most complete information about the "sea peoples" we get from the reliefs and inscriptions from Medinet Habu. This is a memorial temple, which was built by Ramses III at Thebes, in Upper Egypt. The decoration of the temple consists of a series of reliefs and texts about military campaigns against the Libyans and the "peoples of the sea." The events depicted date around 1191 or 1184 BC. And they also provide valuable information about the armor and ammunition of the various groups of "sea peoples" with whom the Egyptians grappled, and they can also give the keys to deciphering their ethnic origin. The image of the fights on land and at sea give a huge amount of information about the armament of "sea peoples". In particular, the reliefs depicting the battle on the ground show the Egyptian troops, who fight the enemy, who also uses chariots, very similar in design to the Egyptian chariot. Another famous relief in Medinet Habu depicts a sea battle. The Egyptians and the "peoples of the sea" use sailing ships as the main means of maritime navigation. And here is the text: “The peoples who came from their islands among the sea, they entered Egypt, relying on their weapon. But everything was prepared to catch them. Having stepped into the harbor, they were locked up in it ... "Well, then the Egyptians apparently defeated them due to their size and good military organization. 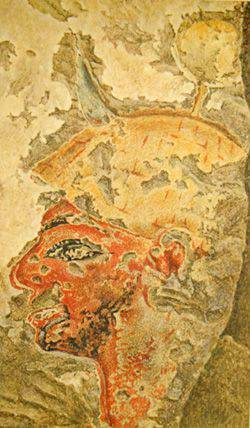 Warrior of the people of Shardan with a horn of blue and clearly in a metal, bronze helmet. Relief from the temple in Luxor.

Now we turn to the armor and start with the helmets - “fortresses for the head.” The reliefs from Medinet Habu, Luxor and Abu Simbel show us 22 sorts of horned helmets belonging to the warriors of the people of Shardan. Of these, one horn is shown only on two helmets, the rest of them are two, and their profiles are very similar. The 13 helmets have a ball on a stick between the horns. Nine don't have one. 17 helmets are given only in outline (as children used to paint Germans in helmets with horns), four helmets are filled inside with horizontal stripes, one “brickwork” and vertical stripes on one strip. This allows us to conclude that the horns and the ball were a kind of symbol of this tribe, and the helmets themselves could be solid forged from bronze (and even molded - one such molded helmet was found in Central Asia at one time), and assembled from “rings” leather with stuffing like a baby pyramid.

Accordingly, the Philistines wore their characteristic “feather” helmet-tiara. On the bas-reliefs it is clear that the Shardans are fighting with the Philistines, that is, the Egyptians, as civilized people, already knew how to work with someone else's hands! 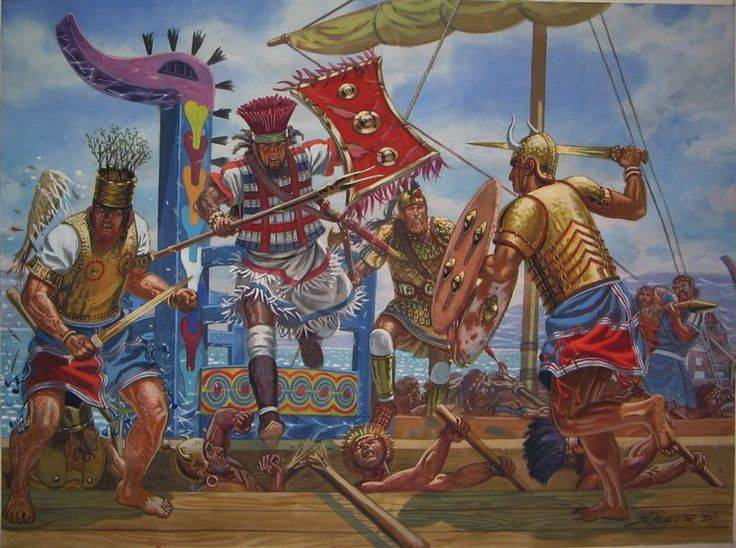 Shardan armor is shown very carefully on the reliefs. As a rule, it is a cuirass with rounded shoulder pads made up of metal bands. British historians call this type of armor "lobster tail." It is clear that the material on the fresco can not be determined. Therefore, it can be assumed that this armor could be A - leather, B - from fabric (glued flax), or C - mixed - from metal and non-metal parts. The Greek historian of reconstruction Katsikis Dimitrios, using images of Medinet Habu and artifacts of the Athens Museum of Archeology, restored one such armor, and it turned out that it is quite functional. 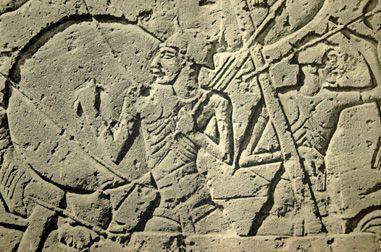 Shardan warriors from the temple of Medinette Abu in characteristic robes "with stripes" V-shaped. What is it? Drawing on the fabric or image of some elements of the protective armor of metal or leather? 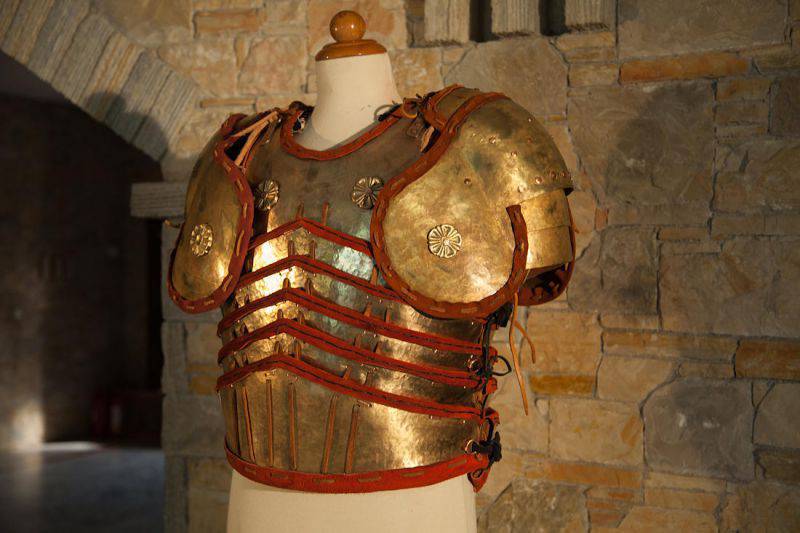 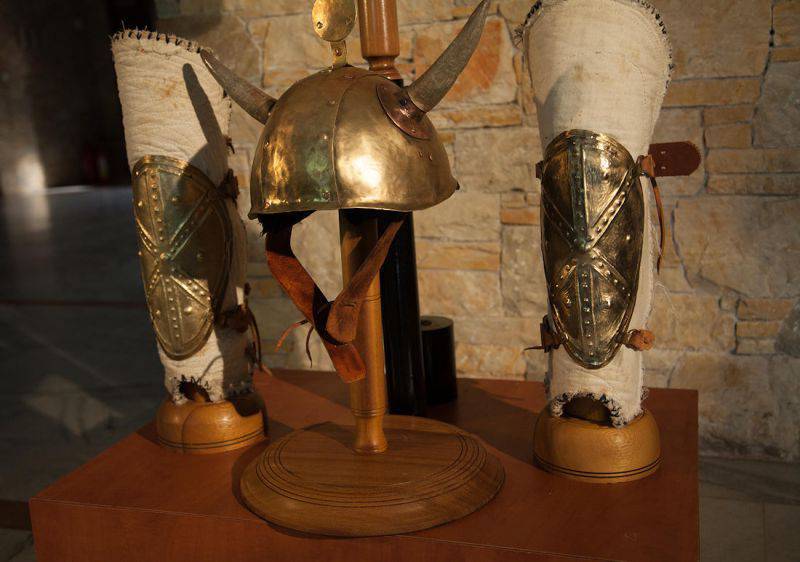 The Philistines, judging by the reliefs from Medinet Habu, also wore similar armor, but their shoulders were not always shown. The overall impression of the picture, they were very flexible, in any case, the bodies in the metal cuirass would not bend like that. This means that the “armor” was made of fabric, or it was just clothing with a characteristic striped pattern. 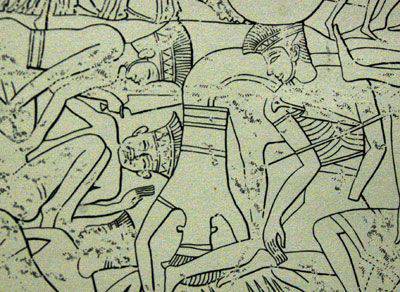 Shardan shields were round, large, with a central handle. On the surface they had metal umbrellas, and they, most likely, were woven from a rod and covered with a bull skin. The frescoes from Akrotiri, which were cited in the previous materials, gave grounds for the artist Giuseppe Rava to depict the warriors from Cyprus, who also apparently had to fight with the “sea peoples” in exact accordance with the image on these frescoes. 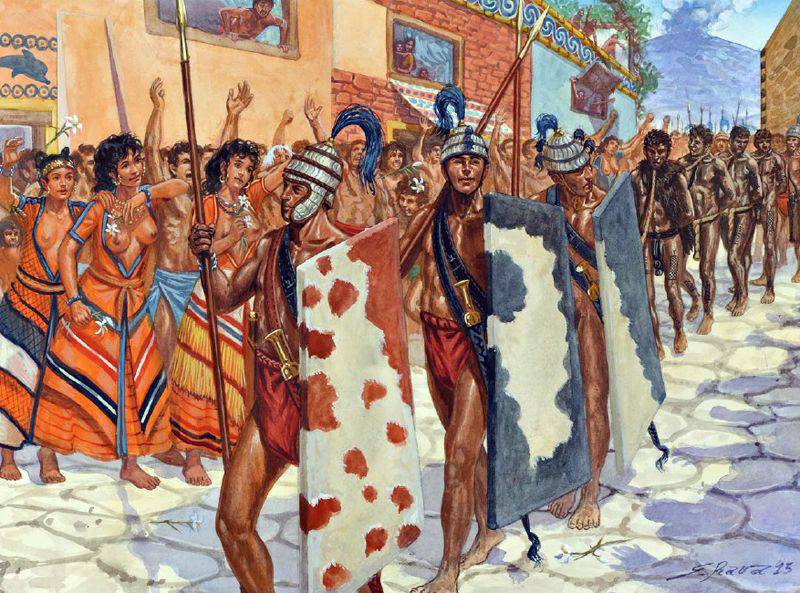 Warriors with frescoes in Akrotiri return from a hike. “Women were shouting hurray and throwing their caps into the air!” Artist J. Rava. 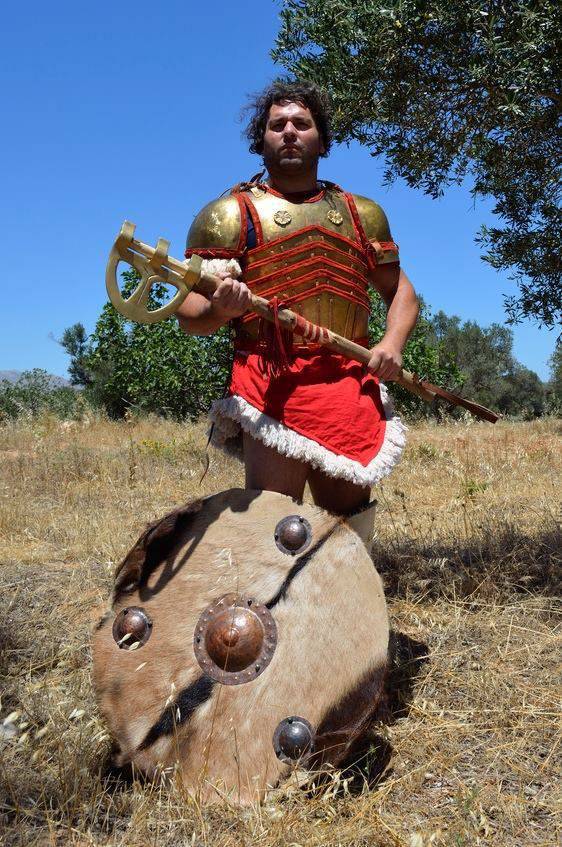 Reconstruction of the appearance of the warrior Shardan Katsikis Dimitrios.

The weapons of the "sea peoples" warriors consisted of spears, long swords, axes, as well as bows and arrows. The swords were most likely similar in shape to such long blades in 90. One of them was found near Jaffa and dates back to 2000 BC. Interestingly, this huge blade (very often found on images of shardan warriors) consists of almost pure copper with a small amount of arsenic. A remarkable number (about 30) of similar swords (about 1600 BC) was also found in a cave on the island of Sardinia. So in this case, the composition of the metal was the same as the above-mentioned sample. That is, Sardinia and Jaffa were connected ... by sea, along which ships sailed back and forth at that far time with warriors who had such long swords. 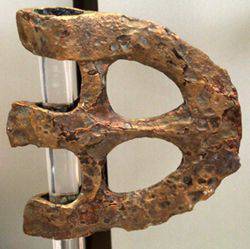 Reconstruction of the sword rapier.

A very interesting bronze sword was found in Ugarit in Syria. And it is interesting, first of all, by the fact that on its blade near the handle there is a cartouche with the name of Pharaoh Merneptah and it means that this is the work of the Egyptians. But to whom it was intended - the actual Egyptian soldiers or mercenaries, Shardan, accustomed to "work" with such long swords - this is a question.

Well, in general, Medinet Habu is still the most important source for our acquaintance with the "peoples of the sea". On this day, when this source was discovered, one could only thank the ancient Egyptians who created this funeral temple, which gives us so much valuable information. And although his images are also confirmed by the reliefs in the temples of Luxor and Abu Simbel, it is he who remains the real visualized encyclopedia of the "peoples of the sea." 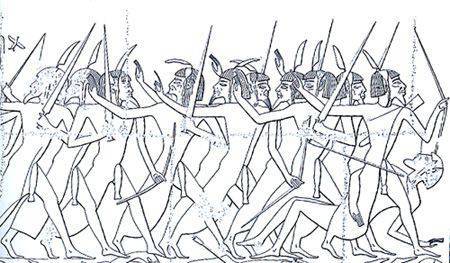 But the map, created on the basis of archaeological finds and text messages, allows you to visually follow the migration routes of "sea peoples". As you can see, it was a real outcome, not inferior in scale and modern crowded movements ... 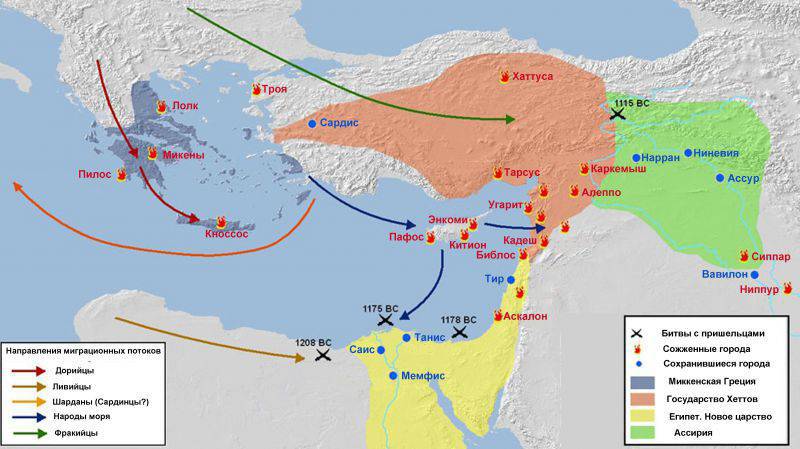 Movement "of the peoples of the sea." A. Sheps

In conclusion, it is worth noting that not only are numerous books published abroad stories Trojan War and the armor and armor of the Bronze Age in Greece and other areas of the Ancient World, but also very popular military miniature of the "white metal". There are several international scales in which these figures are cast, and then they ... "play."