In the desert and in the jungle: Anglo-American tanks in battles and ... in the debate (part three).

October 21 2015
39
As for the Australians, who also participated in the Second World War and fought with the Japanese, they had to do very hard from the very beginning. The threat of the landing seemed very serious, but how could it be repelled? Of their tanks the Australians didn’t, well, simply didn’t, because the “scrap” that they had received from the British at one time was only suitable for training tankmen. Therefore, they urgently requested tank reinforcements from the metropolis and ... received it. In addition, they ordered a number of tanks for testing in their specific Australian conditions. So, for example, the Cromwell tank came to Australia. But his excellent speed data in the jungle turned out to be useless. 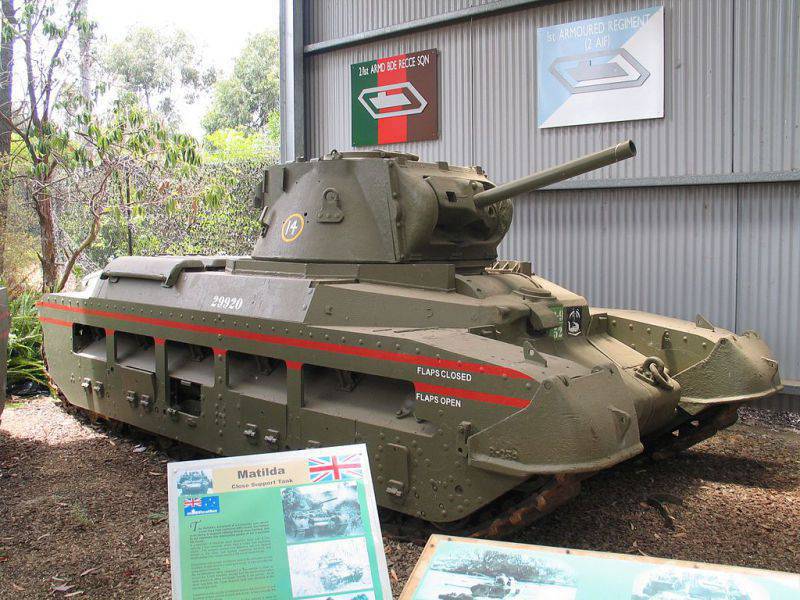 The English Matilda tanks, supplied from England under the Lend-Lease program, were also not very effective at the very beginning of their use. For example, a serious disadvantage of the 40-mm guns of an English tank was the absence of high-explosive shells, and the Australians independently developed and began to produce such shells. But having received them, they did not win much, there was very little explosives in them. Therefore, the main type of tank of this type for them was the Matilda CS - "fire support." 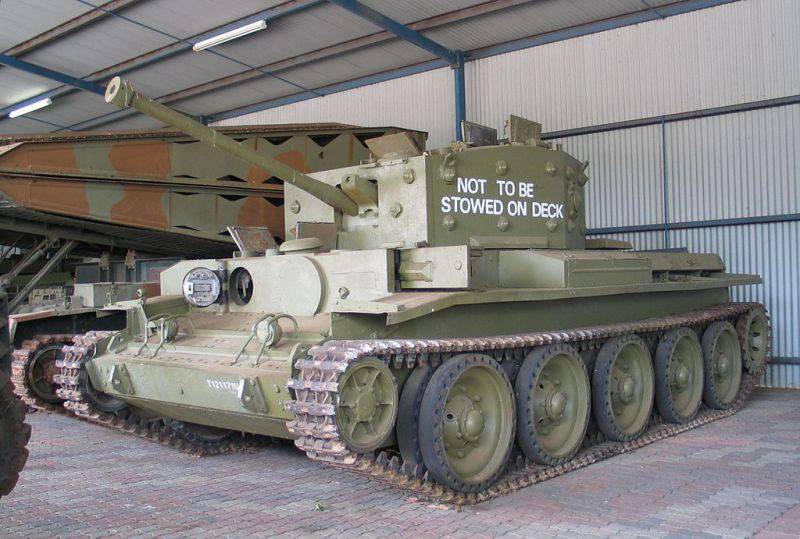 On the other hand, in the conditions of the jungle, infantry flame throwers showed themselves very well, only since the flame throwers were not protected by anything, the losses were carried very large. The Australians thought that since the guns with a caliber of more than 40-mm in the jungle were not required, then let weapons for their tanks will become a flamethrower, able to effectively smoke the Japanese from their well-disguised fox holes, bunkers and trenches, which are usually poorly influenced by traditional types of tank weapons.

The first Matilda tanks (140 machines) arrived in Australia in July 1942. Then 238 tanks received in August 1943. And in addition to them, they sent 33 tanks СS, armed with 76-mm lightweight guns instead of 40-mm guns. These vehicles went ahead of the tank column and bombarded targets with high-explosive and incendiary projectiles. Their task was simple: to destroy the disguise of Japanese pillboxes, so that a tank with an 40-mm cannon could come close to them and shoot their armored caps. 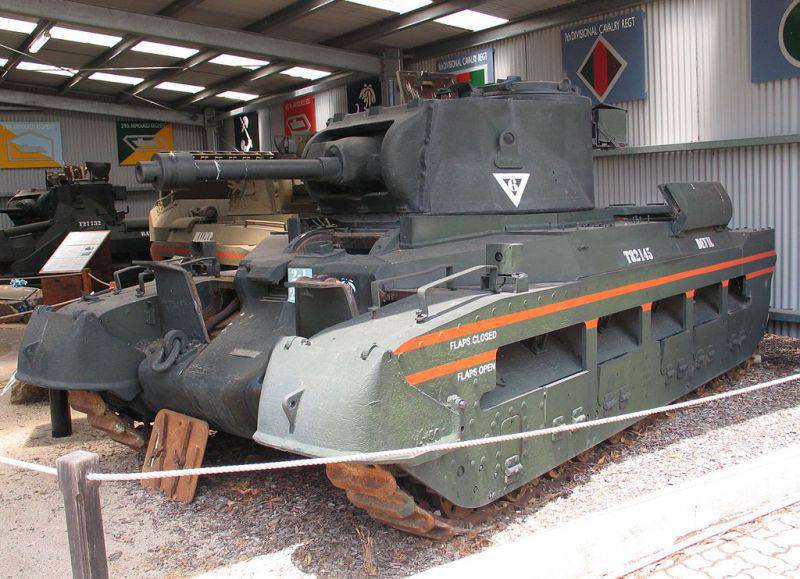 "Matilda-Frog." Museum of the Australian Royal Armored Forces in Papapunyal.

Meanwhile, 25 machines were converted into flamethrower tanks, which were called "Matilda frog" Mk. I. The charged-radio operator was removed as unnecessary, and a tank with a capacity of 150 gallons of thickened fire mixture was installed in its place. And 100 gallons of this mixture was in a special discharged tank in his stern. “Frog” (which means “frog” in English) threw this fire mix on 80 - 125 m (although this distance was often less than exactly half), but it didn’t play a special role. After all, no Japanese tank or anti-tank guns were able to penetrate his armor!

In order to maximally protect their cars from the shells of Japanese cannons, which often fired from the cover almost point-blank and at the same time marked either caterpillars or under the base of the tower, Australian engineers decided to install cast U-shaped caps on them that covered the caterpillars in front, and the base of the shoulder strap was surrounded by armored parapet. This parapet went around it in both directions from the driver's hatch. 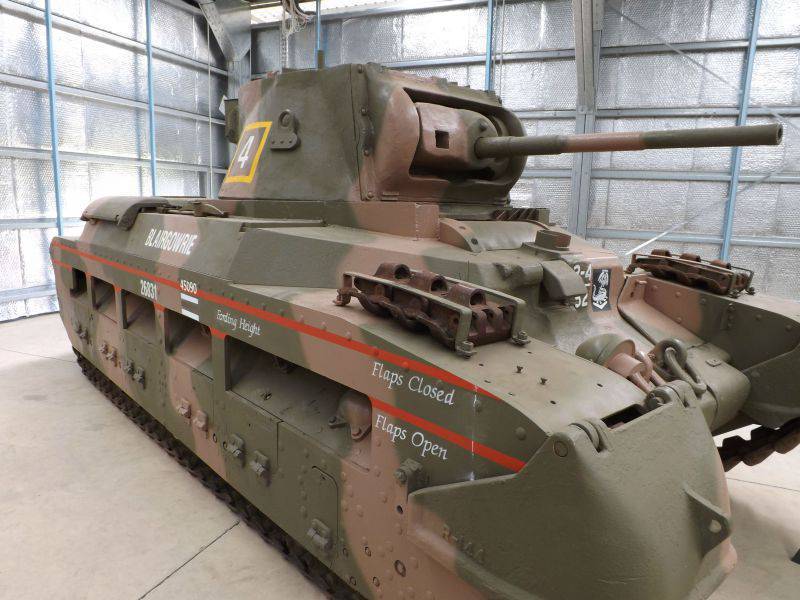 Conversion "Matilda" with parapet and armored caps (they, by the way, could recline!) Caterpillars. Australian Museum of Tanks and Artillery in Carins, Australia.

Then the Australians put a buldoser blade on a number of tanks, and then decided to install on them, in addition, also the anti-submarine bombers "Hedgehog (" Hedgehog "). In general, what a tank "Matilda" was, so he stayed, except that he had an armored package at the stern to launch 7 jet bombs. Weighed one such bomb 28,5 kg, and the weight of the torpex explosive inside it was equal to 16 kg. It was possible to shoot a “hedgehog” on 200 - 300 m (the last range was achieved with an engine of greater power). The driver was raising the package, who had two indicators, looking at which he informed the commander of the angle of elevation. 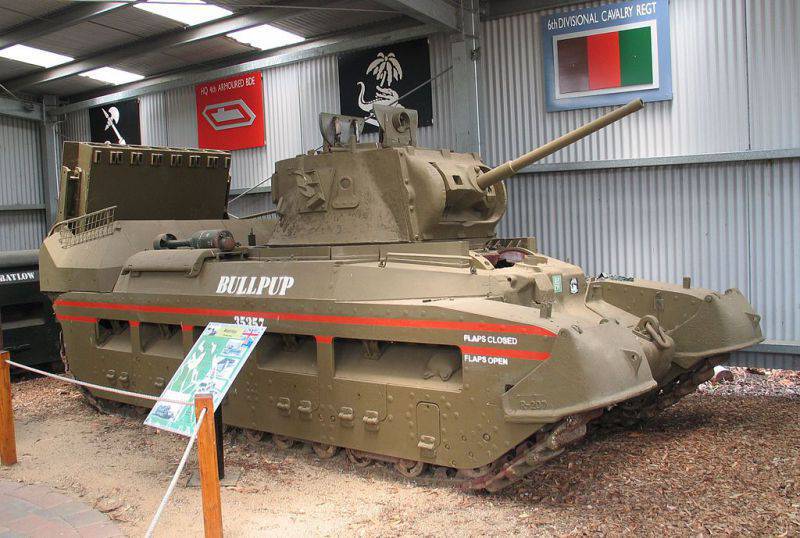 The first projectile was corrective, after which the commander corrected the tip and could have fired in one gulp. To protect the antenna from damage by departing projectiles, bomb No.5 could be fired only by turning the turret with the antenna in the opposite direction. Six tanks were equipped with bombers and they were all sent to Bougainville Island, where there were heated battles with the Japanese. But they were there when the battles were over. 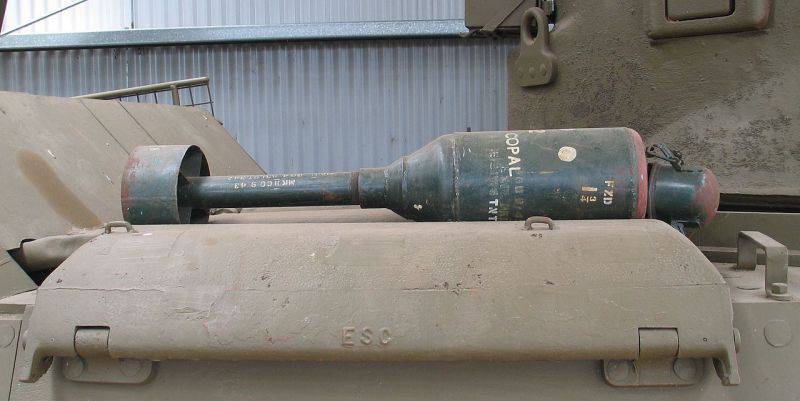 Bomb to the tank "Matilda-Frog." Museum of the Australian Royal Armored Forces in Papapunyal.

It is interesting that the Australians themselves later said that if their British colleagues who fought on the Matilda tanks in the deserts of North Africa, looked at them in the jungle, they would not believe their eyes. "We could not have won the campaign in New Guinea if it were not for the Matilda tanks," the Australian tankers who fought against them said many times. 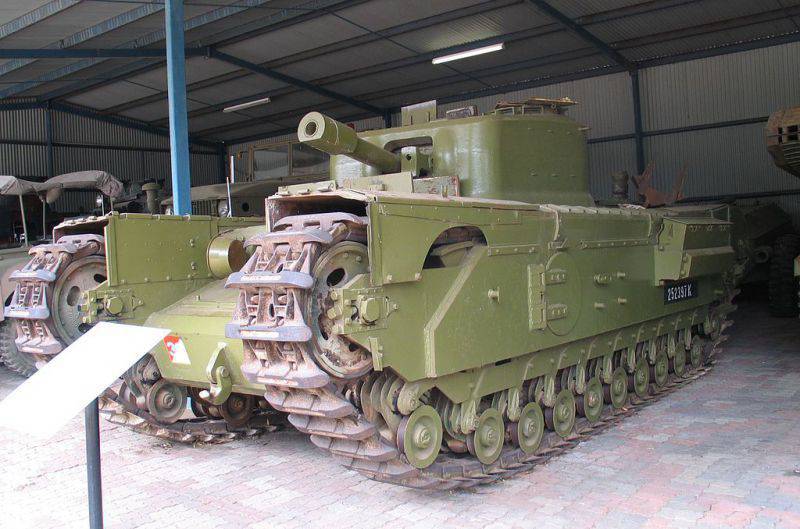 Churchill-Frog. Museum of the Australian Royal Armored Forces in Papapunyal.

After the end of the war in Australia in the 1948, civilian armed forces (analogous to the National Guard), their 1 tank brigade, received the Matilda tanks, which were then used to train the tankists for seven more years. tanks "Centurion". 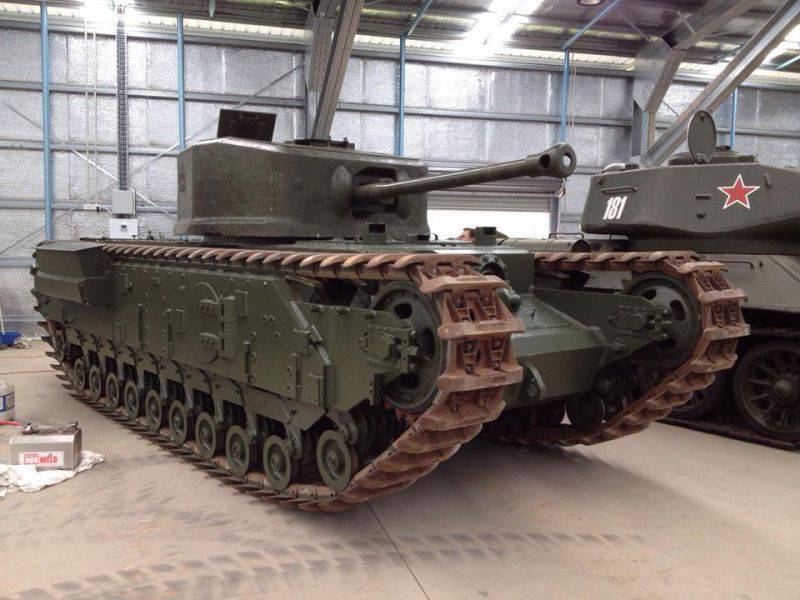 By the way, one more machine, ideally suited for war in the tropics, was the English heavy tank Mk. IV Churchill. By the way, he was tested together with the American tank "Sherman", which he surpassed in all basic indicators, so that his service in the Australian army, as well as in the "Matilda" tanks, continued even after the war. “The perfect tank for war in the jungle,” said Australian tank crews. But in Russia, our tank crews felt sorry for those of their comrades who fell to serve on these heavy and seemingly awkward Lend-Lease tanks, which, in the conditions of the jungle, turned out to be especially good! By the way, it was used by Australians and again, very successfully, the Churchill-Frog flamethrower tank. It was impossible for the Japanese to escape from its fiery jet even in the jungle! 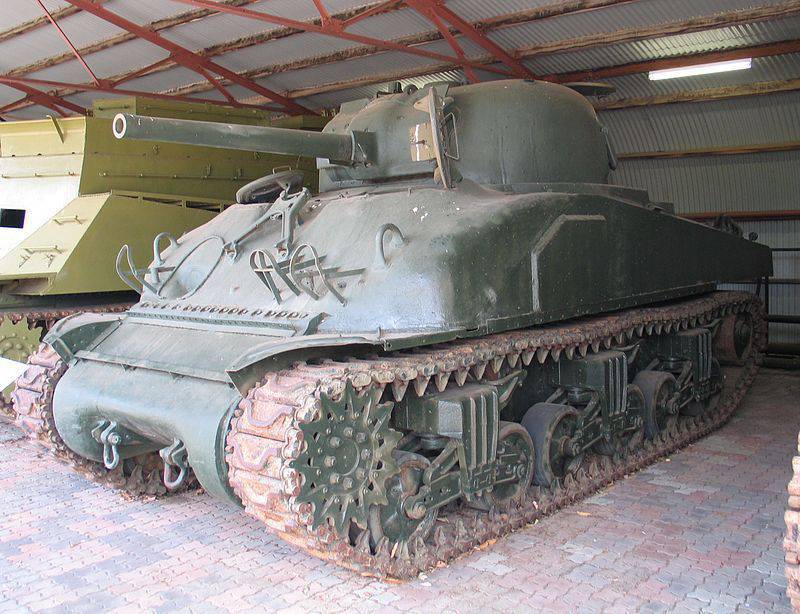 "Sherman" with a composite case: the nose of the cast, the rest of the rolled armor, supplied under a lend-lease to Australia.

Australians created their own tank during World War II only in 1942, and although their design was clearly a success, they didn’t produce it in order not to create unnecessary problems with ... supplies of Lend-Lease tanks, which production of their own Australian tanks could would seriously interfere! 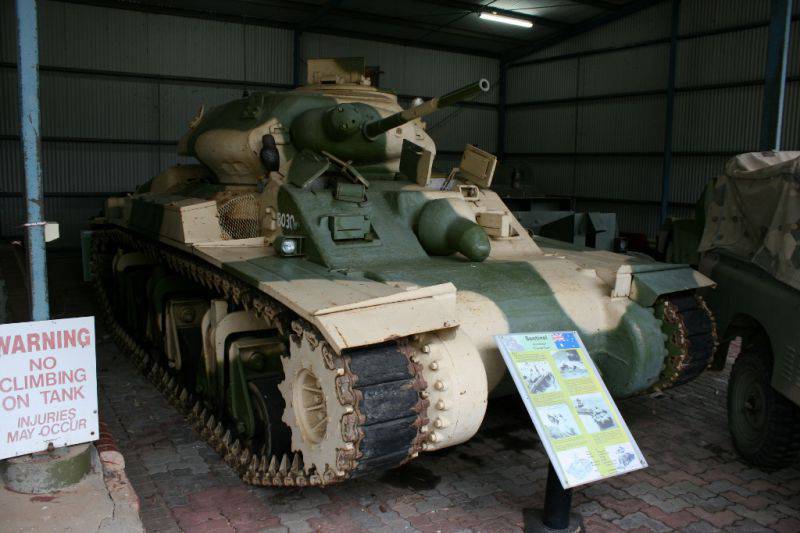 “Sentinel” AS I. Museum of armored vehicles and artillery in Carins, Australia.

Australian medium tank "Sentinel" ("Sentinel") Mk. III - the first and last tank, created in great haste by Australian designers. And it was so that the command of the Australian ground forces issued an urgent order: on the basis of its own technological base to make a tank, not worse than the American MZ "Lee / Grant". At that time in Australia there was no capacity for either casting or for renting armor, there were no suitable engines, so the designers had to solve a difficult task. But in spite of everything, the first three tanks made 1942 already in January, and in July they launched their production at the railway plant in Chullore. Total built 66 tanks, but then production is still stopped. 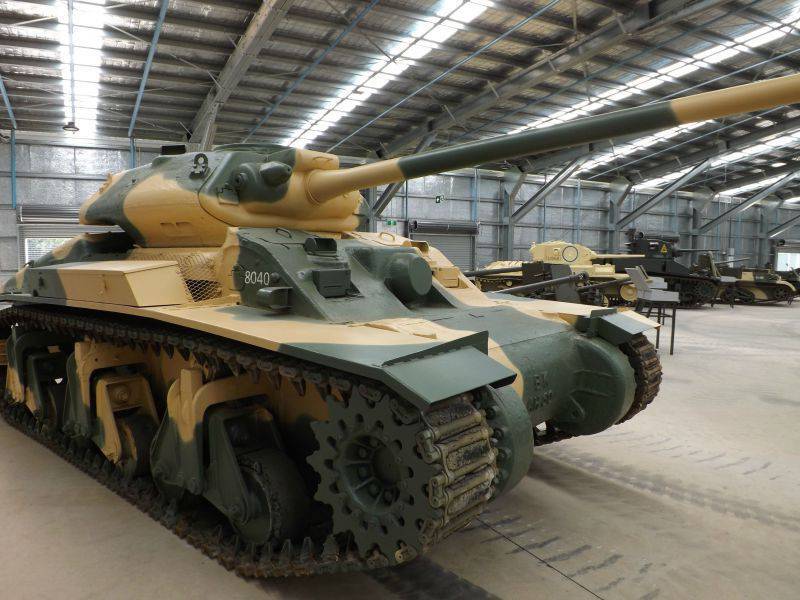 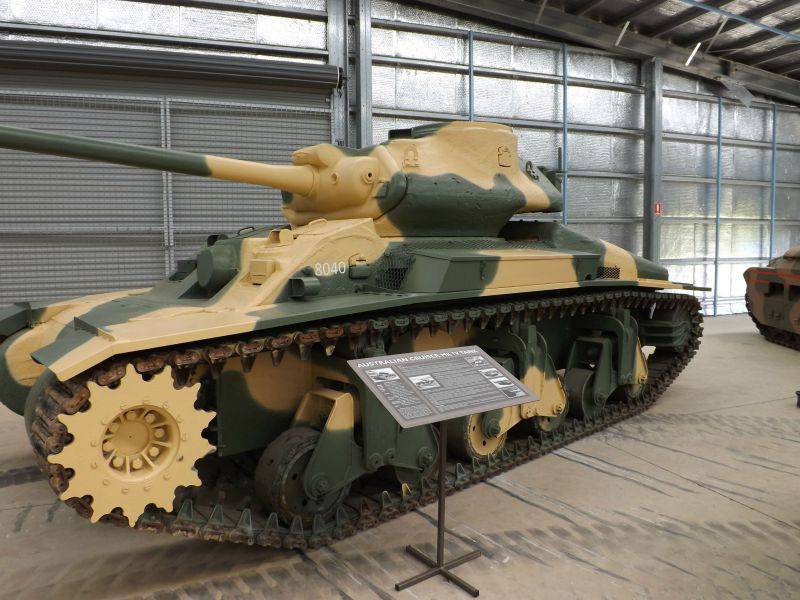 Sentinel AC IV Thunderbolt is a modification with an 76-mm cannon QF 17 pounder, created on the basis of AC III. Produced only one prototype. But if he went into the series, he would have been much stronger than the Sherman tanks that were supplied by Australia. Museum of armored vehicles and artillery in Carins, Australia.

We can say that the Australians showed maximum resourcefulness. Thus, the entire body of the car was assembled from cast parts, and the ability to install on it the armament of a larger caliber was incorporated into the structure from the very beginning. The tank was lower than the similar Sherman. No powerful tank engine? No problem! The Australians installed a block of three (!) Cadillac gasoline engines with a total power of 370 hp on the tank. The tank had a weight of 26 T (like the T-34 of the very first releases), but at the same time its frontal armor thickness was 65 mm against 45-mm in T-34. True, the gun of the first tank Mk. I was a caliber 40-mm, like all purely British cars. The “silent-block” suspension — an analogue of the French suspension of the Hotchkis tank — provided the car with a smooth ride, although they were overheated due to the heat, like a block of built-in motors. 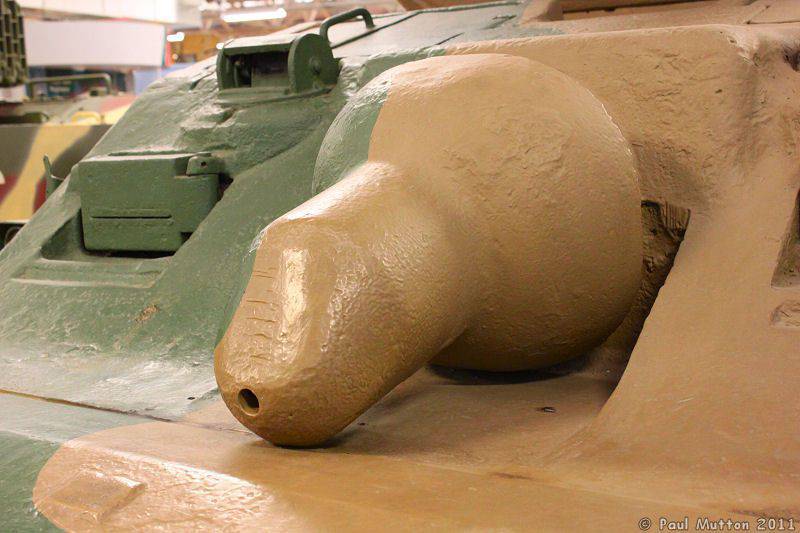 The armor of the frontal machine gun on the Sentinel ACI tank was surprisingly strange. And it is unlikely that it happened by chance ... However, its “phallic form” is not so much significant as weight. One can imagine what the mass of the counterweight should have been, so that the machine gunner could, without much stress, direct it towards the target! 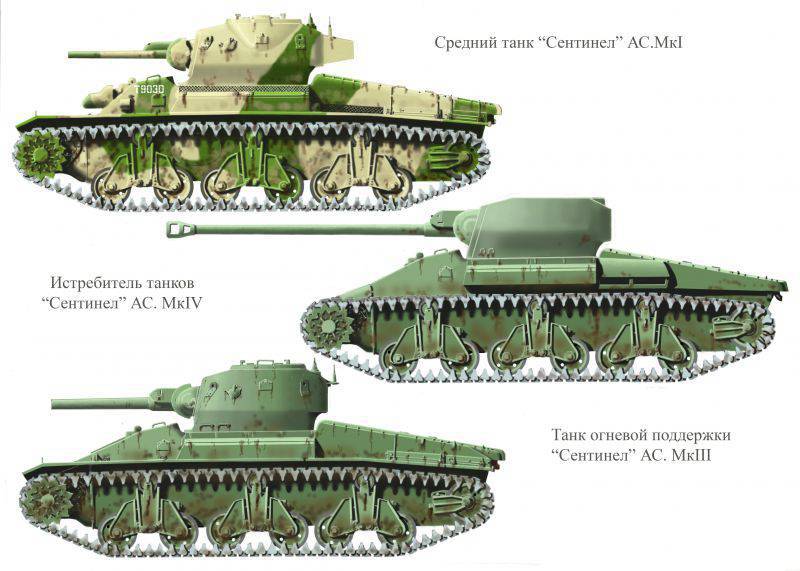 In the future, even the 25-pound (87,6-mm) field howitzer was installed on the ACII modification, and the frontal armor plate was made with a very large inclination to increase the armor resistance. Then they created a prototype ACIII with two (!) 25-pound howitzers. Finally, the next model was equipped with an 17-pound English gun, which only a year later got on the Sherman Firefly tank. But then the Americans intervened in the case, as a result of which the decision was made not to produce this tank with 25, or with 17-pound, or even with two 25-pound paired guns, and to use the first 66 machines made only for training purposes. 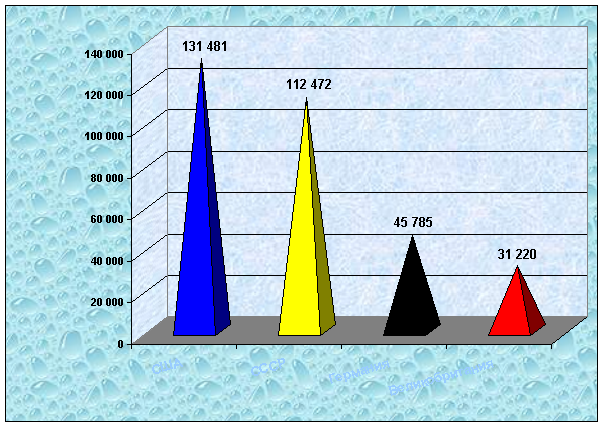